In the beginning 1960-ies to the leadership of the British Navy faced the problem of replacement fighter aircraft “sea vixen” (Sea Vixen) more modern machine. First, the sailors wanted to buy from your company “Hawker Siddle” (Hawker Siddeley) supersonic aircraft vertical takeoff R. 1154. But because of its high cost and the inevitability of problems in development, they turned their attention to the American Phantom, which was relatively cheaper and did not require a large investment of time to create.

Discussion the configuration of the Phantom for the UK took place in the summer of 1964. In the same year, the Minister of defense Peter Thorneycroft (Peter Thorneycroft) announced the purchase of “phantom”, modified to be based on English carriers, in the variant of the fighter-bomber.

The basis of the new modification engineers took a carrier-based fighter-interceptor F-4B. Hence the original American designation British “Phantom” – F-4B (RN), RN from the Royal Navy. However, the negotiations dragged on, and after the modification of the F-4J designers working on the aircraft and the designation was changed to F-4K. In the UK fighter-bomber received the designation Phantom FG.1, FG is the abbreviation for Fighter Ground Attack.
The first order consisted of 143 aircraft, but in 1966, after coming to power in the UK labour party, who sought to reduce military spending, it is first reduced to 137, then to 110, and finally came to four experienced and the 48 serial. Of them wanted to form two squadrons for the armament of the aircraft carriers “Ark Royal” (Royal Ark) R09 and “Eagle” (Eagle) R05.
F-4K had a large number of differences from the base model. They are all dictated by the peculiarities of the British aircraft carriers, their short take-off and landing deck were demanding better landing characteristics, strengthen the chassis and brake hook. In addition, the restricted size of the cutouts in the deck to the elevators samolyotov forced the developers to think about shortening the fuselage a meter, otherwise the plane just could not be brought from the hangar to the flight deck. 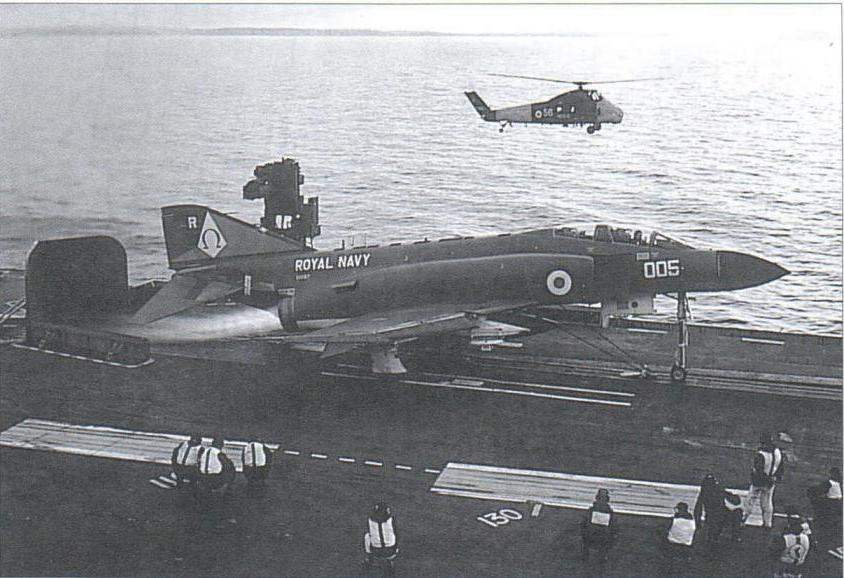 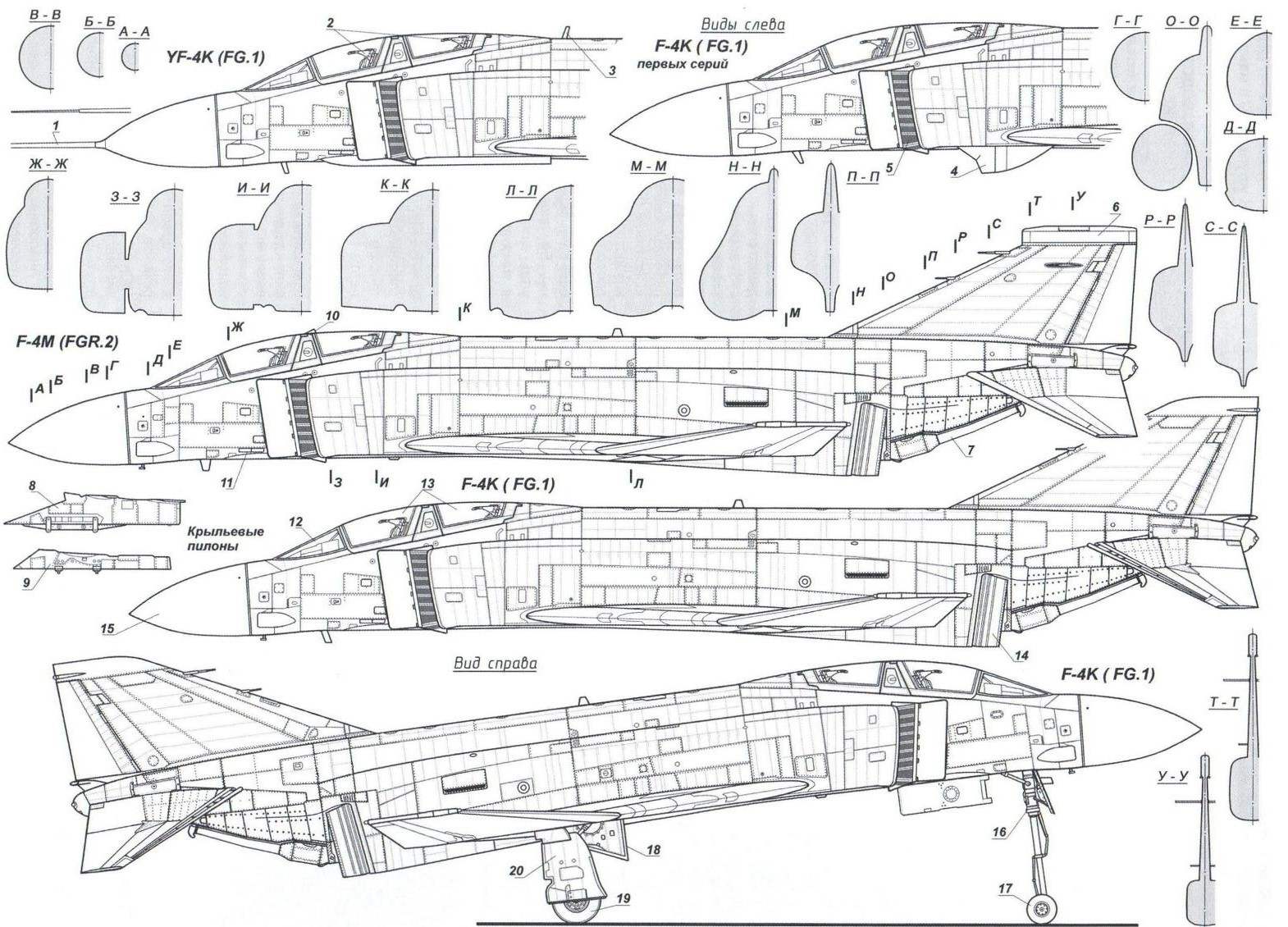 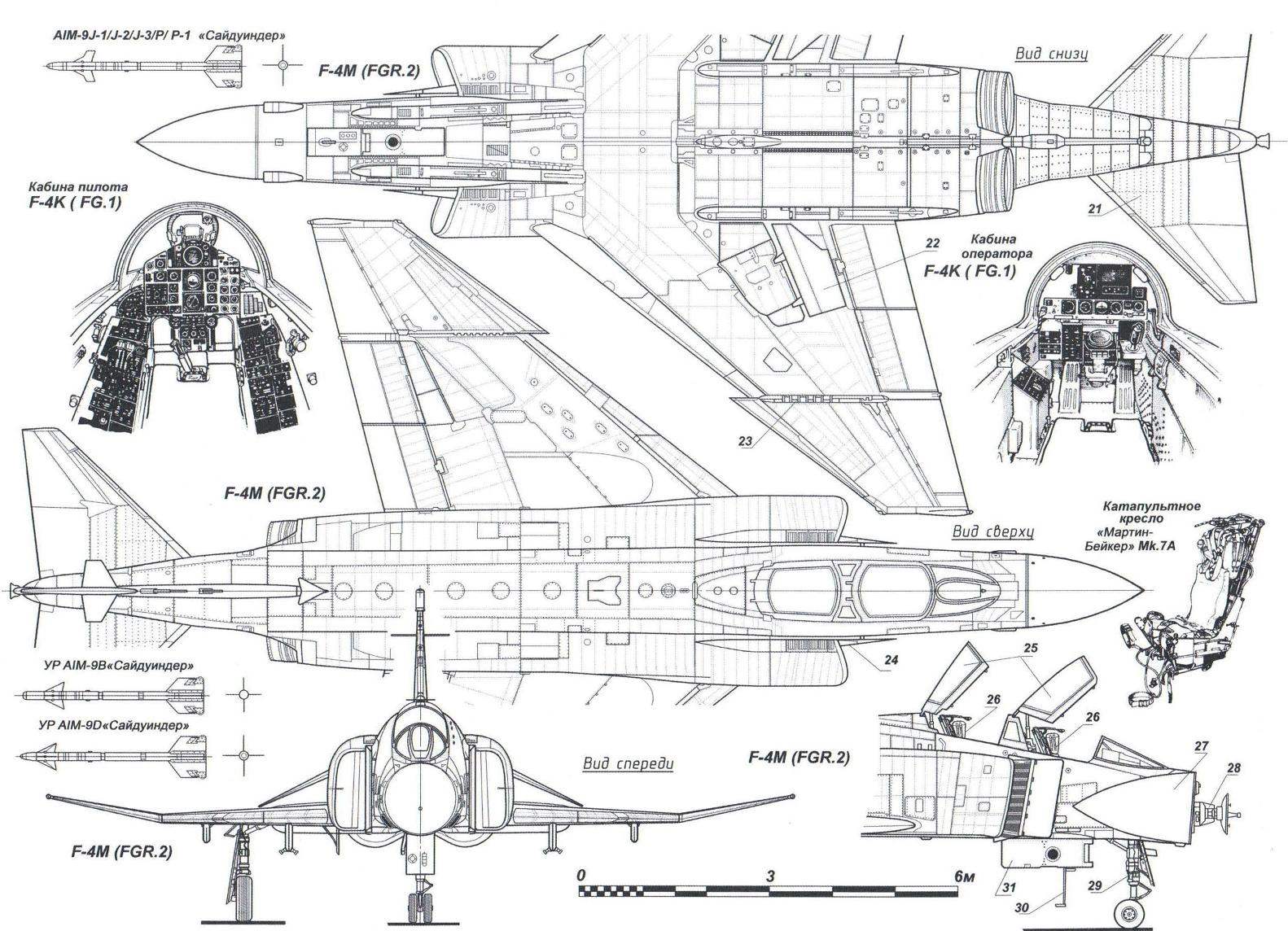 These decisions affected the fate of “phantom”. Instead of the 48 aircraft of the Navy received only 29, which became part of 892 squadron, the remaining FG.1 handed over to the air force. Forming a 43rd air defense squadron that was based at the airfield Lakers (Leuchars) in Scotland. 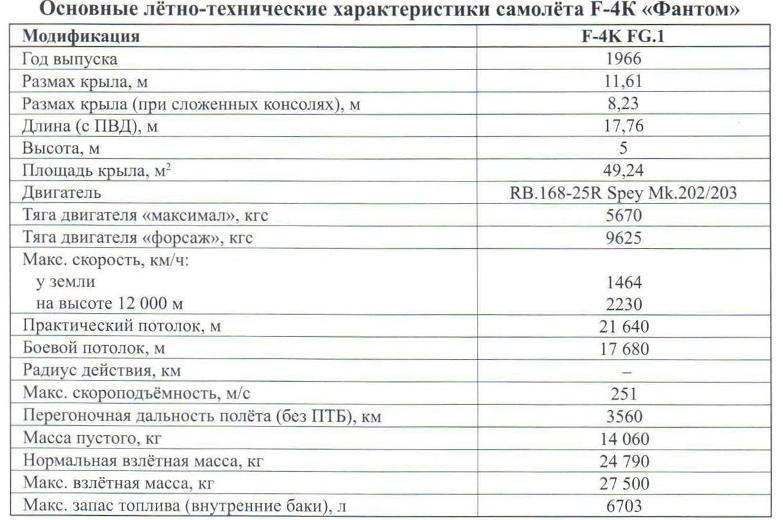 F-4K/M:
1 – extension rod for flight testing; 2 – chair of the “Martin-Baker” (Martin-Baker) Mk.H5; 3 – antenna (only prototype); 4 – television sighting system; 5 – drain hole of the boundary layer of air; 6 – antenna; 7 – brake landing hook; 8 – inner wing pylon; 9 – outer wing pylon; 10 – periscope rear view; 11 – a niche cleaning retractable ladder; 12 – canopy canopy; 13 – opening of the lantern; 14 – motor; 15 – radar Radome; 16 – bow front in the starting position; 17 – wheel nose landing gear; 18 – fold niche wheels; 19 – wheel main landing gear; 20 – fold main landing gear; 21 – rotary stabilizer; 22 – brake; 23 – unit rotation of zakonov-Ki wing; 24 – wedge intake; 25 – lights of the cab in the open position; 26 – chair, “Martin-Baker” (Martin-Baker) Mk.7A; 27 – radar Radome in the open position; 28 – radar; 29 – the front landing gear in the released position; 30 stepladder; 31 – fold niche cleaning front
In 1969, the British newspaper the Daily Mail chose to mark the 50th anniversary of transatlantic flight bomber “Vimi” the company “Vickers” (Vickers Vimy). To this end, it initiated an air race British military aircraft across the Atlantic and set a prize of £ 10,000. The participants had to overcome the distance between the Empire state building in new York and the post office tower in London.
More specifically, the pilots had to get a conditional letter from new York to London. On top of the Empire state building, the race took the envelope, went down the Elevator, sat on a motorcycle and drove to the helicopter, which brought the party to the nearest airport, from there, already on his military plane, he raced across the ocean to London, where again he sat in the helicopter, and then ran to the post office. Thus the complexity of the task was not so much the maximum possible speed of the fighter route, but in the organization of all competitions and coherence of all participants on the ground and in the air.
The BBC put the team on airplanes “Harrier” (Harrier) GR.1 of 1 squadron. The Navy decided to perform a “phantom” FG.1 of 892 squadron. The support team of the competition included helicopters, the Wessex (Wessex) of 72 squadron. Aerial refueling was carried out by the tanker “Victor” (the Victor) from the 55th and 57th squadrons.
Victory in this thrilling adventure, which was broadcast live TV channels in the UK and USA, was won by the sailors. The crew of “Phantom”, the pilot Brian Davis (Brian Davies) and operator Peter Goddard (Peter Goddard), missed 5 hours and 11 minutes. Their fighter crossed the ocean in 4 hours 46 minutes and 57 seconds, setting a new speed record on this route – 1164,84 km/h Team from the air force formally lost with the result of 6 hours 11 minutes and 57 seconds. But “harriera” flew in the opposite direction, from London to new York and, thus, morally also considered themselves the victors. 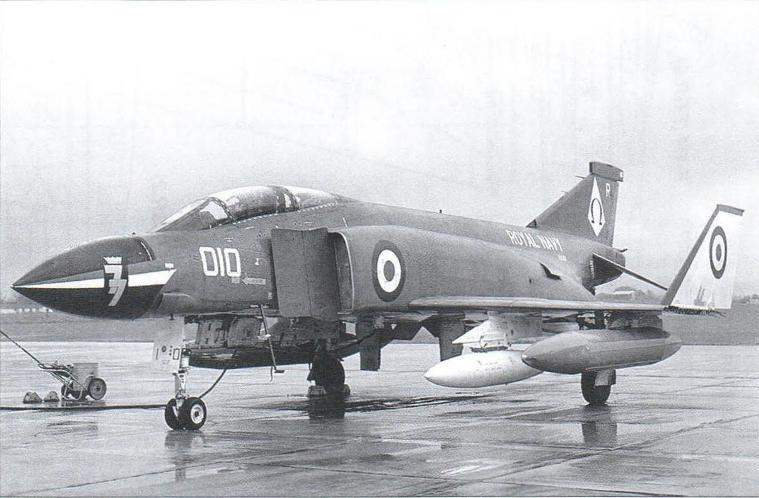 Fighter the Phantom F-4K of 892 squadron of carrier-based aircraft, painted in honor of the 25th anniversary of the accession to the throne of Queen Elizabeth 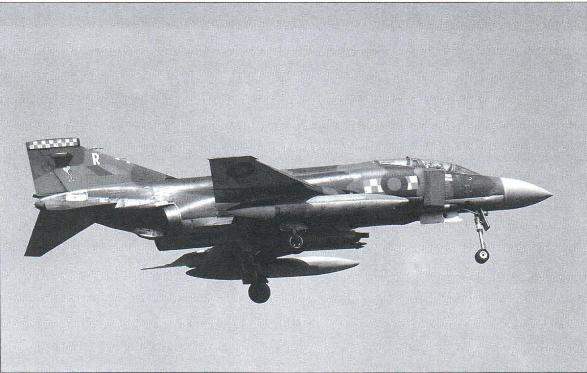 Phantom FGR.2 of 92 squadron RAF in camouflage color
IN THE RANKS
In June 1970 the first and, as I thought, the last carrier-based squadron 892, armed with FG.1 were relocated aboard “Ark Royal”. On the tail of the aircraft sported the letter P (omega) is the last letter of the Greek alphabet. The main combat task for “phantoms” was the fight against air targets. The assault capability of the FG.1 was very limited. No guided weapons class “air-land” they are not held and could only use conventional bombs, SNEB unguided rockets caliber 68 mm.
In 1975, at the fin tip FG.1 set box-container system warning receiver of the enemy radar AR1 18228 and upgraded sighting system.
During the operation on Board the FG.1 there is another interesting and unusual instrument – the so-called “positioning device handle” (Stick Positioning Device – SPD). Invented by pilots, he did rise from the deck as safe as possible. The fact that before takeoff the pilot had to reject the stabilizer at a certain angle, which depended on the weight of the fighter and the speed of the oncoming wind. The lack of deviation could lead to strong drawdown of the aircraft, and excessive – to go critical angle of attack and loss of control. For external control of this important angle on the fuselage struck a special markup, but the pilot to set the desired angle was difficult, he in the cockpit, just missing the appropriate indicator. Here is something to help and came SPD. It was a rope, attached at one end to the lower part of the dashboard. Its other end is attached to the control handle. The pilots had only to choose the right length of the rope that will most accurately reflect the desired angle of deflection of the stabilizer, and before takeoff to keep it tight.
In 1978 the jets FG.1 blamed on the shore – the aircraft carrier “Ark Royal” was taken out of operation. Last FG.1 took off from its deck November 27, 1978. 829 squadron was disbanded. Deck aviation pilots boarded the fighters “Harrier”. Marine “phantoms” distilled in Scotland, where they formed the 111 th squadron of the air defense, which used FG.1 to 1990. For all time of operation of the Royal Navy lost seven FG.1 in accidents and disasters. Eight aircraft crashed during their operation in the air force.
F-4M, or Phantom FGR.2 was a modification of the F-4J for the Royal air force (RAF). The letter “R” (from the English. reconnaissance) designation indicates the ability to perform reconnaissance aircraft missions. He was bought to replace obsolete fighter “Hunter” (Hunter). The contract for the supply of 200 F-4M was signed in 1965. Then, as in the case of carrier-based variant, the order was reduced to 150 machines, and later to 118, this number included two prototype YF-4M.
Unlike deck options at FGR.2 used front chassis normal length main stand was equipped with a mechanism rastor-magimania, instead of flaperons was a regular ailerons and installed engine “Spey” 202 without the extra boost. And another was a set of on-Board equipment. Radar was distinguished by the presence of the mode of terrain mapping and the ability to detect air targets on the background of the earth. As in the case of the deck with the “Phantom” part of the components to build a fighter aircraft produced in the UK, and final Assembly took place in the United States.
The first of two prototypes YF-4M, with registration number ХТ852, flew on 17 February 1967. The tests were completed without too much difficulty, and the fighter launched into serial production. The first production FGR.2 flew to the British Isles on 18 July
1968 years and the last 29 Oct 1969 . Retraining of personnel of the RAF, the new technique took place on the basis of the 228th centre in Coningsby (Coningsby). There in may 1969 from FGR.2 formed and the first combat squadron of No. 6. Prior to the adoption into service of aircraft “Jaguar” (Jaguar) division of the British “phantom” took upon himself the execution of strike missions, using bombs, NUR outboard and cannon containers SUU-23. Later FGR.2 steel interceptors.
Under the Central ventral pylon all FGR.2 can be suspended container with reconnaissance equipment type EMI.
In 1975, all cars were modernized, they have established SPO ARI 18228. In 1979 improved PRNG for the application of SD medium-range “sky flash” (Sky Flach) and new versions of Sidewinder. For extending the life of the airframe in 1987 at 75 FGR.2 replaced the power set and the sheathing panels of the wing.
In the late 1980-ies the British “phantom” began to retire and replaced by the Tornado F. 3 interceptors. Latest FGR.2 were taken from the RAF in 1992.
A. CHECHIN, N. Food reserve was