This svobodnymi glider — simple, durable, reliable and moderately “volatile” — was created as a training. It was assumed that newcomers in the process of its manufacture and operation will quickly master techniques of the work with the model aircraft materials and will gain the skills to adjust and run the model. However, tests have shown that among its advantages is joined by terrific “volatility” on the level of specialized osakryl models championship.

The results of flight tests of the airframe allowed to consider it not as a model for initial training and as a universal Svobodnaya model is equally suitable for training and competition use. Slightly complicating the power circuit due to the introduction of wing polonorum and additional stringers, and replacement of heavy light balsa keel, managed to improve the flight characteristics of the glider. With this adaptability, he remained at the same level, it is available for guys only that have acquired basic skills in modeling. Upgraded model not only became in our circle of “party favor” for the boys, passionate about Svobodnaya, but was built palustrine more experienced athletes. The best examples, the plaque that the standard guard rails reached 130 (!), was quite competitive in the Junior competition.
Design models for traditional training gliders, if not to take into account the singularity of the transverse frame of the wing (rarely a very powerful set of ribs) and profiling. High flight performance is likely obtained due to the successful combination of the profile of the wing, his cross “V” and the area of the bearing planes. A short, badly up ears not only give the glider greater stability even in turbulent air, but also increase the efficiency of the Central area of the wing to create maximum lift at relatively low value of drag. Have very short wing (for which the new model got the name “Compact”), even with its enhanced design moment of inertia in roll is much smaller compared to pure samples of the championship with a wingspan up to 1.5 m. Therefore, it is likely that the glider was very sensitive to upward flow, good holding, even in the narrow “thermals”. Short fuselage with light weight tail (including the keel and stabilizer) provides a low value of the moment of inertia in pitch, allowing for sufficient effectiveness of the horizontal tail to the high stability of the flight even with a strong gusty wind, which is clearly not typical of the subclass of the gliders of type A-1.
The manufacture of such models is simple. The main requirement is high-quality raw materials, precise machining, fit of parts, and accurate Assembly of the entire frame. Used for bonding plasticized epoxy, which gives not comparable with any other glue results. 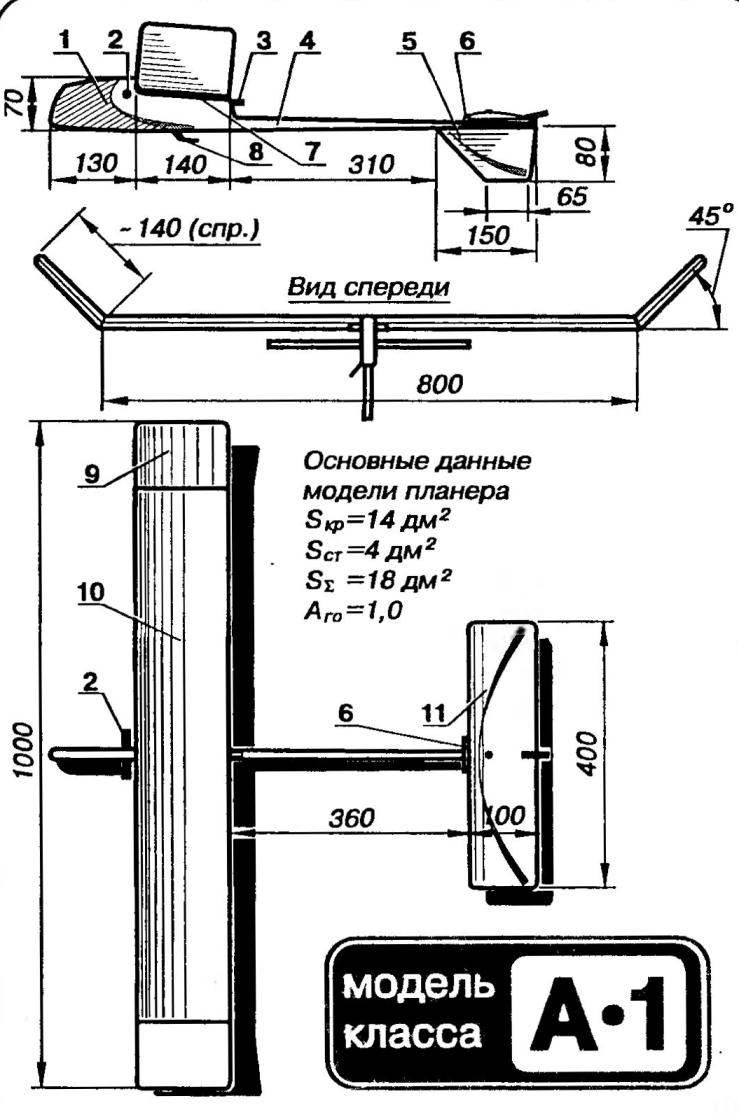 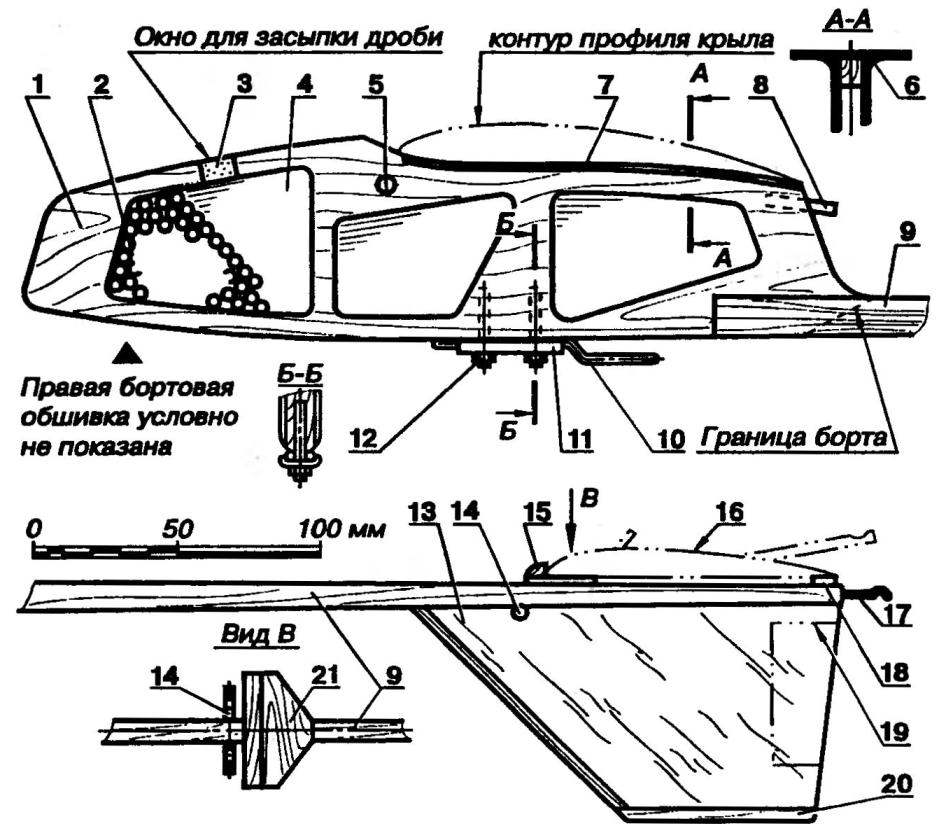 Scheme of cutting of the workpiece, made in the form of profiled sections of the wing, the oblique rib joint “ears” and a Central part.
Although in the drawings for most parts specified materials such as pine and basswood, the choice of wood should be approached very carefully. Even high-quality pine, if possible, should be replaced by spruce — the latter is easier to process and, most importantly, it produces less massive frames with increased strength and rigidity. Lime in connection with its porosity (durable varieties too heavy) it is better to replace wasp: it is more difficult to process and is very fragile, but with equal strength of the parts of aspen and Linden first almost two times lighter.
Cover all bearing surfaces of the airframe — quality macalintal paper, glued and topped with a homemade “amelita” — nitrocellulose adhesive for leather, diluted with solvent No. 646. Unlike modern domestic dopes binder such good pulls the paper practically does not age and does not yellow.
Model “Compact” is extremely simple to operate, which is very important as when teaching beginners and Junior competition. In particular, the airframe is completely absent now newfangled mechanics, from the most complicated multi-part tow hooks and ending with the clockwork of time limit of planning (more practical appeared a simple matchlock device).
On our model tow hook — less common side type. The displacement of the suspension point of the glider on the rail sideways is about 12 mm. straightness of the takeoff is provided by a positive twist of the wing in the side of the hook. The both “ears” have the same negative twist in the range of 8 mm at the tip. Such an asymmetrical wing allows the model immediately after leaving the Leer go a turn without loss of height, even when towing according to the type of dynastart. With a little practice manage to disperse the “Compact” in the final phases of takeoff to speeds comparable with the speed of the gliders international championship class F1A. Estimations for optical measurements of height and calculations of time planning allowed us to determine that benefit from a “shot” of the rail is 10 m additionally recruited during takeoff altitude.
V. COSSACKS
the head of a circle of aircraft modeling