RC model glider model aircraft built in the laboratory of Botkin’s House of pioneers and schoolboys champion of the Udmurt ASSR and the second winner of the all-Russian competitions of aeromodellers-school 1974 Igor Seninim.
The model has good gliding qualities, clearly fulfills all the teams and well-kept the set course. Unlike other designs on the airframe increased the area of the stabilizer (17,55 DM2), which makes the model available to management and less experienced modelers.
The fuselage is built without frames. Front boss of lime. The thickness of its walls is 6-7 mm. the Rear boss is also out of Linden. It is of rectangular cross section which moves in a circle of Ø 45 mm.
Assembly of the bow following: on boarding the ski stick both boss and their four corners of the stringers. Side surface and the bottom is covered with plywood with a thickness of 1 mm. Instrument “Pilot-2” install through the top window and close it a plywood plate with a thickness of 1 mm. the Tail boom is glued fiberglass to the mandrel 045 mm with the transition to Ø 25 mm. the wall Thickness of tube 1 mm.
The wings have a trapezoidal shape. Profile MUA-301. Structurally, the wing consists of ribs, nose, spars, struts and wingtips. Rib — purple of veneer thickness of 1 mm. of the Root rib is plywood with a thickness of 1 mm. Longitudinal dvukhpolosnykh from the pine strips 7X3 mm. cross-section of the Rails of the second side member have a cross-section 6X2,5 mm. Both of the spar in the center section reinforced lime plates with a thickness of 1 mm. Root of the wing sewn fake veneer (1.5 mm), which is then treated with emery paper to a thickness of 1 mm. Wing attached to the fuselage by means of three wire probes, wire OVS Ø 4 mm. Bracing pine section 2,5X2,5 mm. Behind-the-endings made of foam PVC 1-115. The front and rear edges of lime. The front section of 5X5 mm, rear — 15 x 4,5 mm. 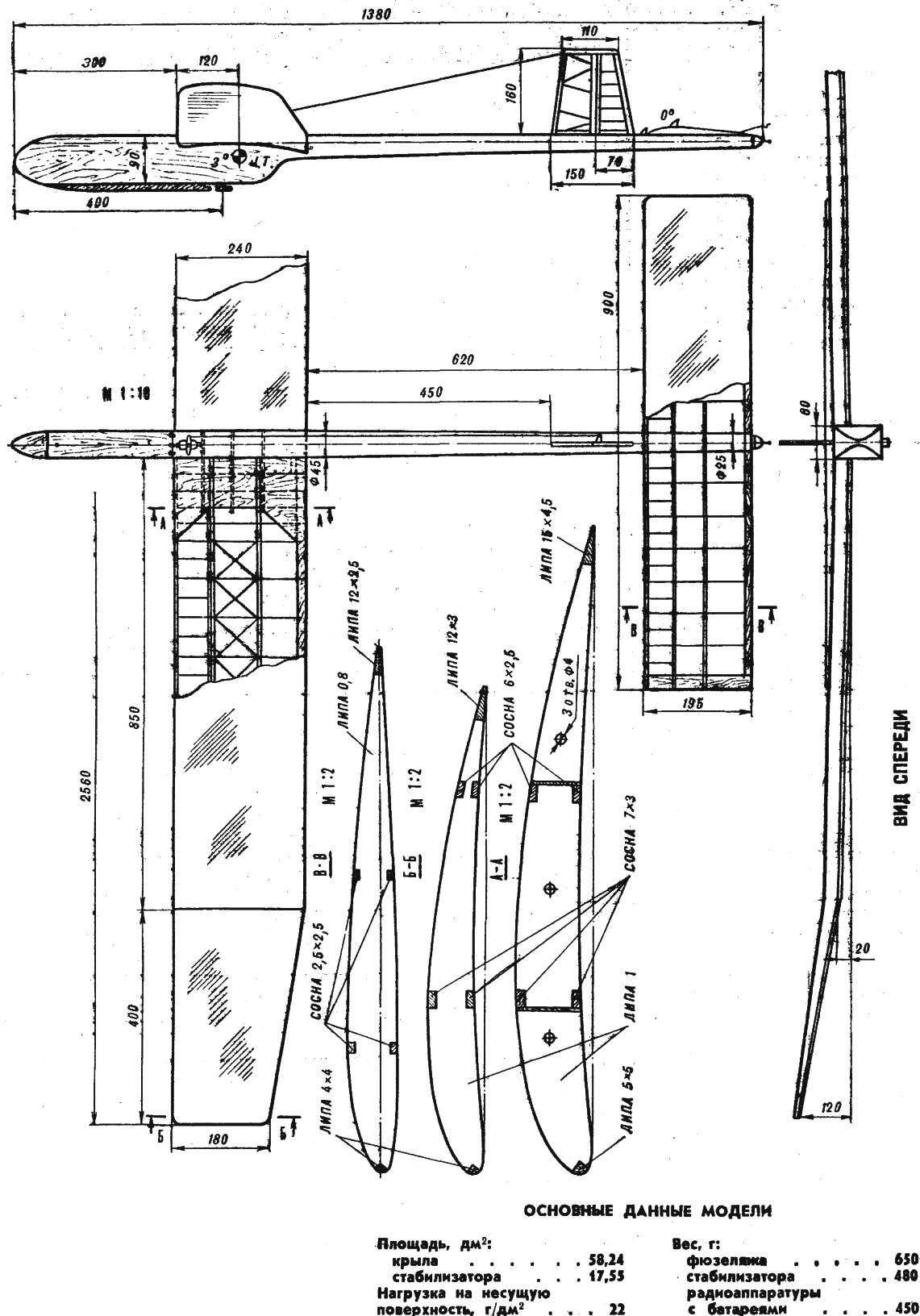 The stabilizer made of the same materials as the wing. It has two dvukhpolosnykh spar, made of a pine section 2,5X2,5 mm. the middle Two ribs out of plywood with a thickness of 1 mm. glued To them two hook celluloid 2 mm thick. Rear hook-wound thread to the rear spar and the edge. The trailing edge of the stabilizer has a cross section 12X2,5 mm, and the front 4X4 mm. Stabilizer and the fuselage is pulled rubber band. It included installing wick for the forced landing of the model.
The keel stacked design. To it thread is attached to the rudder that is deflected to both sides by 35°. Servo drives the rudder using pine thrust Ø 4 mm. the Model is covered with colored paper and mcalenney five times covered with napolcom.
A. CHIRKOV, head of availablitiy Botkin House of pioneers and schoolchildren