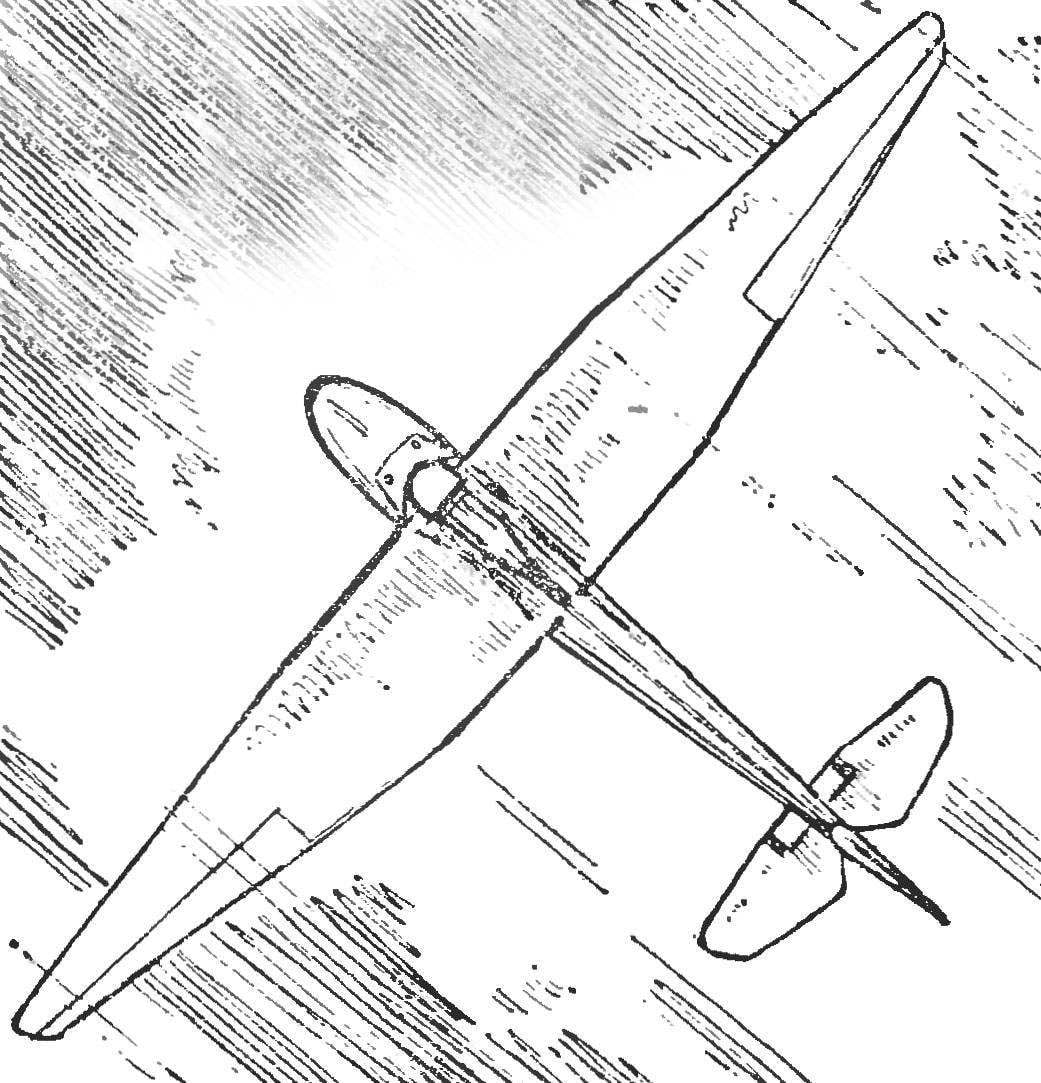 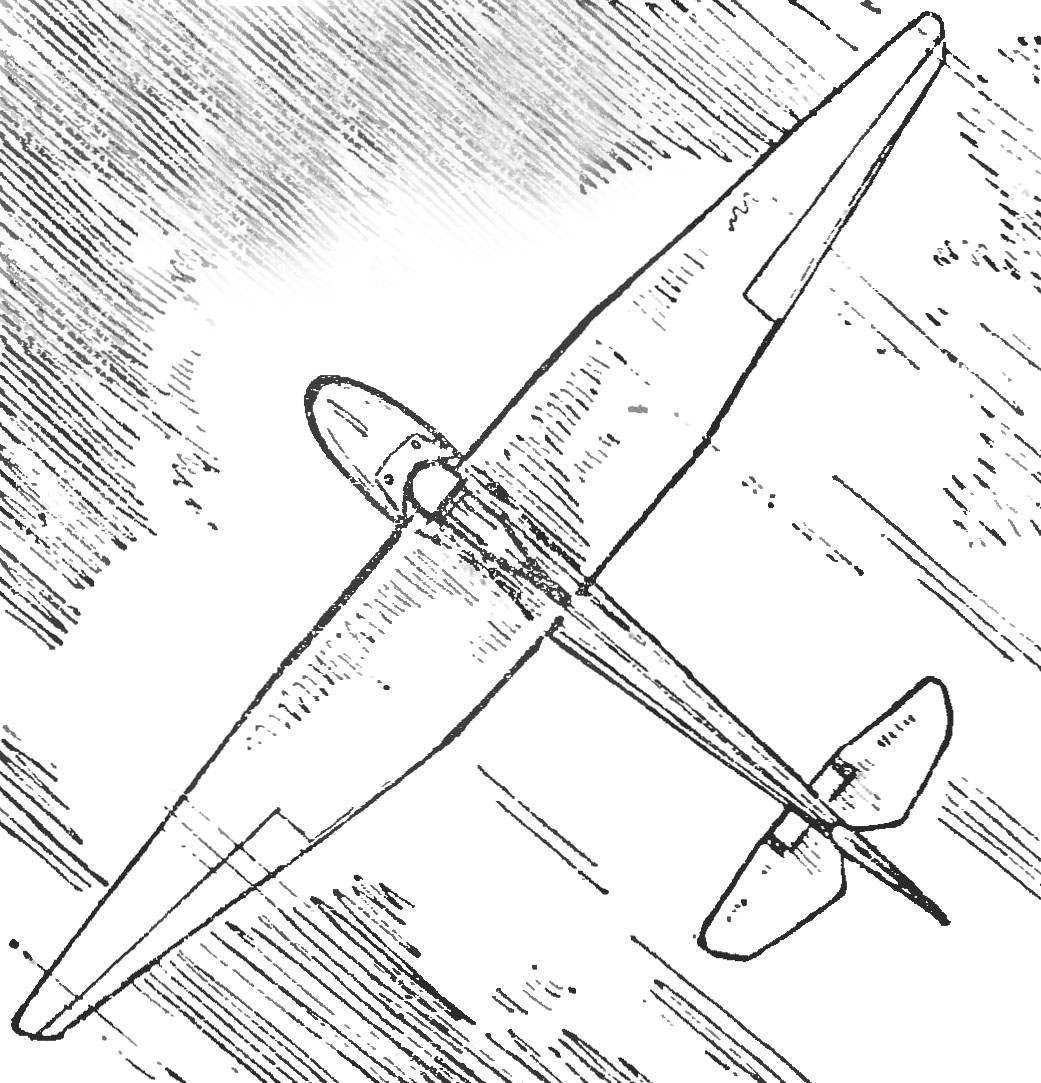 Start 30-ies was a time of rapid development of Soviet gliding. The newly constructed plant produced serial training gliders and sent them to all parts of the Soviet Union for gliding schools, stations and groups.
The head of the design Bureau was engineer of the O. K. Antonov, now chief designer, the author of the world famous Anov. He invited me to work in his office, and since January 1938, I was decorated to the rank of chief designer of KB.
In addition to regular work assignments of the Department of Osoaviakhim glider, the young office staff after hours enthusiastically worked on the creation of new types of gliders. The most able of them: L. Kochetkov, V. Emelianov, G. Groshev and later held responsible positions in large aircraft.
The first glider L. Kochetkova was Oktyabrenok, the design of which we developed together. At the rally, 1933, he was the smallest by far: having a wingspan of 9 m, weighed in at 59.2 per kg.
Whole single-spar wing is attached to the Troll nodes overlap two frames of the fuselage. To obtain the correct alignment of the pilot’s seat was pushed back so that the head of the pilot inside the cockpit had to make a cutout in the front wing. Above the pilot’s head was placed a rectangular U-shaped fairing. Boarding the depreciation of a Bicycle saddle attached to the lower beam of the fuselage. 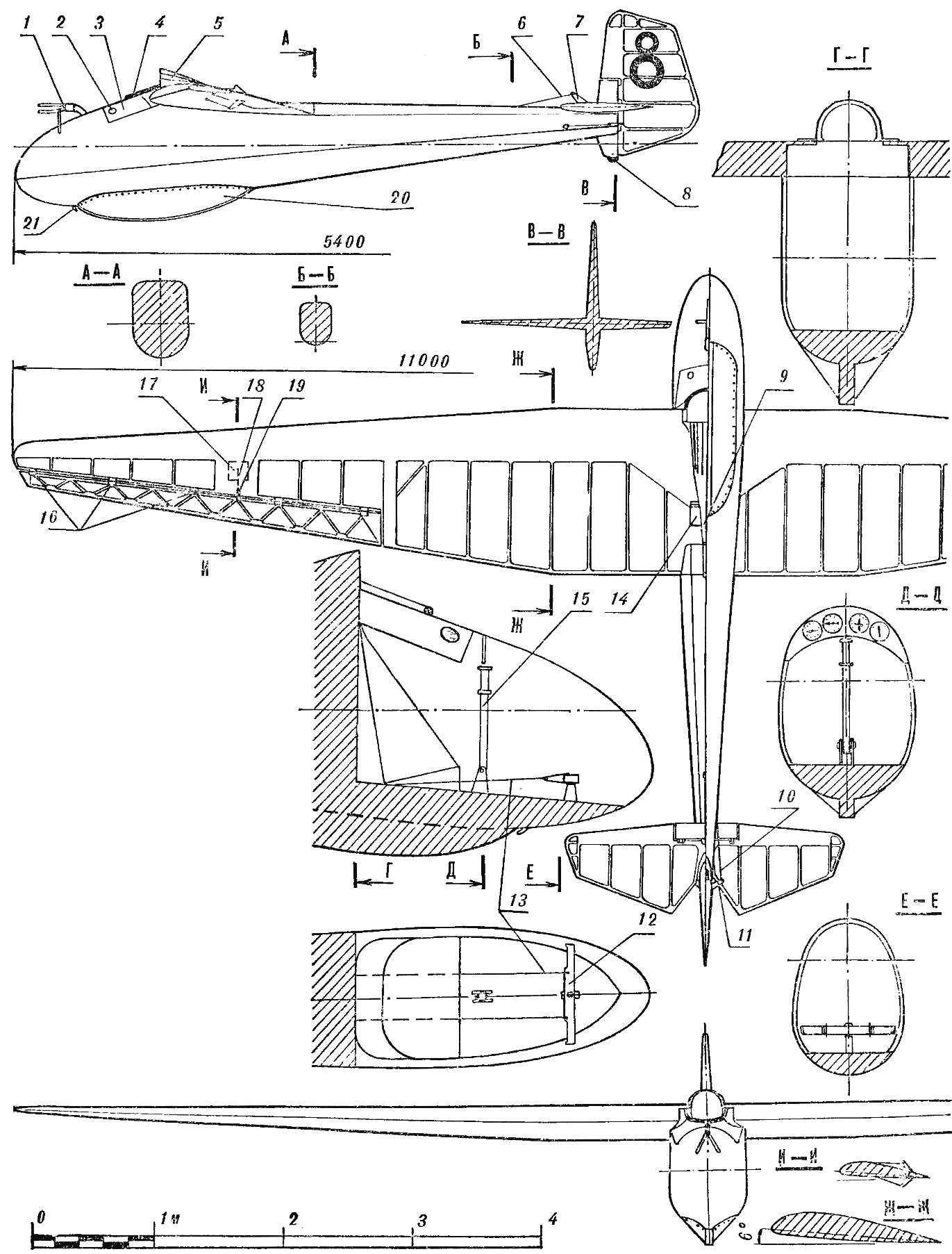 GLIDER “MARCH 8”:
1 receiver air pressure for device speed indicator; 2 — celluloid Windows for lighting of the dashboard; 3 — removable cover cab; 4 — soft padding (harness) cut the cab for the head of the pilot; 5 — headrest, turning into a slit tape; 6 — cable of the Elevator; 7 — rocking rudder; 8 — a rubber ring crutch; 9 — slit tape; 10 — the cable of the rudder; 11 — rocking of the rudder; 12 — pedal foot control; 13 — foot cables management; 14 — Luke for joining the wing to the fuselage; 15 — handle; 16 — attachment lugs Aileron; 17 — Luke (below the wing) for inspection control; 18 — Aileron control cable; 19 — the rocking Aileron; 20 — the canvas covering the space from the fuselage to the skid of the skis; 21 — starting hook.
At the X plenary meeting of 1934, flew the second machine Kochetkova “March 8” (LSK-2). The design of this glider it completed by yourself. He received good feedback on the contest announced by the Department of Osoaviakhim glider, and was allowed to build the plant.
In contrast to the “Octobrist” wing on this car consisted of two parts, the scope of his increased to 11 m. the Glider weighed in at 76.3 per kg (compared to conventional machines, its weight reduced by more than one-third as gliders with a span of 12 to 14 m and weighing 100-110 kg).
What gave the designer the ability to lighten the airframe? Every detail L. S. Kochetkova carefully thought out and precisely calculated. Instead of Amalita wing and tail of the airframe was covered with transparent varnish. The fuselage is painted silver paint and carefully polished.
1941 Lydia S. works in the Ministry of aviation industry. From thirty-odd years of seniority twenty she gave the helicopter industry.
It would seem, what is there to do with gliders? But overall, there is the novelty of the technique! In 1932, rapidly began to develop gliding, in 1951, began the formation of a Russian-made helicopters, and L. S. Kochetkova enthusiastically takes up new business. Working as a senior engineer and then chief of helicopter Department, she had spent a lot of time making prototypes and serial production of helicopters.
It is well known that to date the Russian helicopter industry has made tremendous progress. Rotorcraft active in many sectors of the economy. And our Soviet heavy helicopters are the best in the world! In this context there is a considerable share of labour and L. S. Kochetkova. It is no accident that the pilots affectionately call her “our helicopter mom.”
B. SHEREMETYEV, engineer