Created in our circle of control line speed model aeropittura school of a subclass with an internal combustion engine working volume of 1.5 cm3 the diagram is for a rarely used “asimmetrik”. In its construction—a number of technical solutions which allowed to improve starting (which is very important in the environment of the model newcomers) and performance. So to facilitate germination on a wave at lower than championship technique speeds the length of the nose redan decreased, while the angle of attack is his “sole” in the back work area a bit increased. Absolutely unconventional technique — Vegas the front edge of the redan on the corner about 8′ in the view of the model from the front. This solution ensures a reliable start, eliminating incorrect even with the cast time of the glider inside the running circle (hydrodynamic lifting force developed on the “sole” of redan, has a component directed towards the left side). In addition, an important factor of removal of spatter from under the redan on the right side, that is away from the disk rotation is offset to the left of the propeller power plant.

Even when designing the model, emphasis was placed on maximum compression all sizes (why is the boat in the end and got the nickname “Baby”), it solved the problem of reducing the aerodynamic drag of the model and reduce its mass, which in result led to a decrease in the hydrodynamic resistance and, consequently, increase the potential speed performance.
In an effort to reduce to the limit the length and diameter of the case, we should not forget about such requirement of the rules of the competition, as the buoyancy of the model in static state. The displacement hull of a conical shape is determined by the following formula:

where V is the volume (cm3) length (cm), R is the radius of the larger base (cm) and r is the radius of the smaller base (cm) truncated cone.
An elementary calculation in our case gave a value of more than 500 cm3. This stock provides buoyancy,” as in the starting condition (without fuel) model has a mass in the range of 300…350 g. In fact, the stock is much greater because in these calculations is not taken into account the displacement of the float. However, when asymmetric scheme we have regarded it only as an element for lateral stability of the stationary model. It should be noted that, despite all our fears, such a model is not turned even after the engine is stopped when a large wave. Apparently, it affects the location of the engine — cylinder to the side of the float.
The drawings are the most time-consuming case — tapered. It is performed by symmetric workpieces. The wood used is basswood or aspen lung of sorts. By the way, from material selection depends largely on how the future strength of the hull and its weight. Gluing the finished halves as the Assembly of all components, is made on the most durable and water resistant binder is epoxy resin.
Of course, a variant of construction of the hull closest to the championship technique, therefore, can not always be handled by the modelers-beginners. Therefore, provided the modification is based on the body Assembly of four identical fake plates-pieces 2 mm thick. the length of the body is left unchanged, the width of the straps at the ends should be equal to 33 and 16 mm, which provides an Assembly of a pyramidal enclosure of square cross section with the bases of 18×18 mm. 35×35 and the displacement remains in the same range as that of the cone, and the mass slightly exceeds the “elite” version. Suffice it to say that the total mass of planed and cut to size fake pieces faceted body 54…60
Useful before final Assembly of the housing to have a ready-made pylon power plant. This will clearly customize the items to each other and to avoid casting large cracks heavy “epoxy”. Pilon is collected as follows. On a flat bench put one of the power panels made of 1 mm plywood. Stick to it consistently all the elements of the pylon with subsequent Stripping of the opposite side and mounting a second covering. The cutout for the engine is performed only after removing the pylon from the slipway. 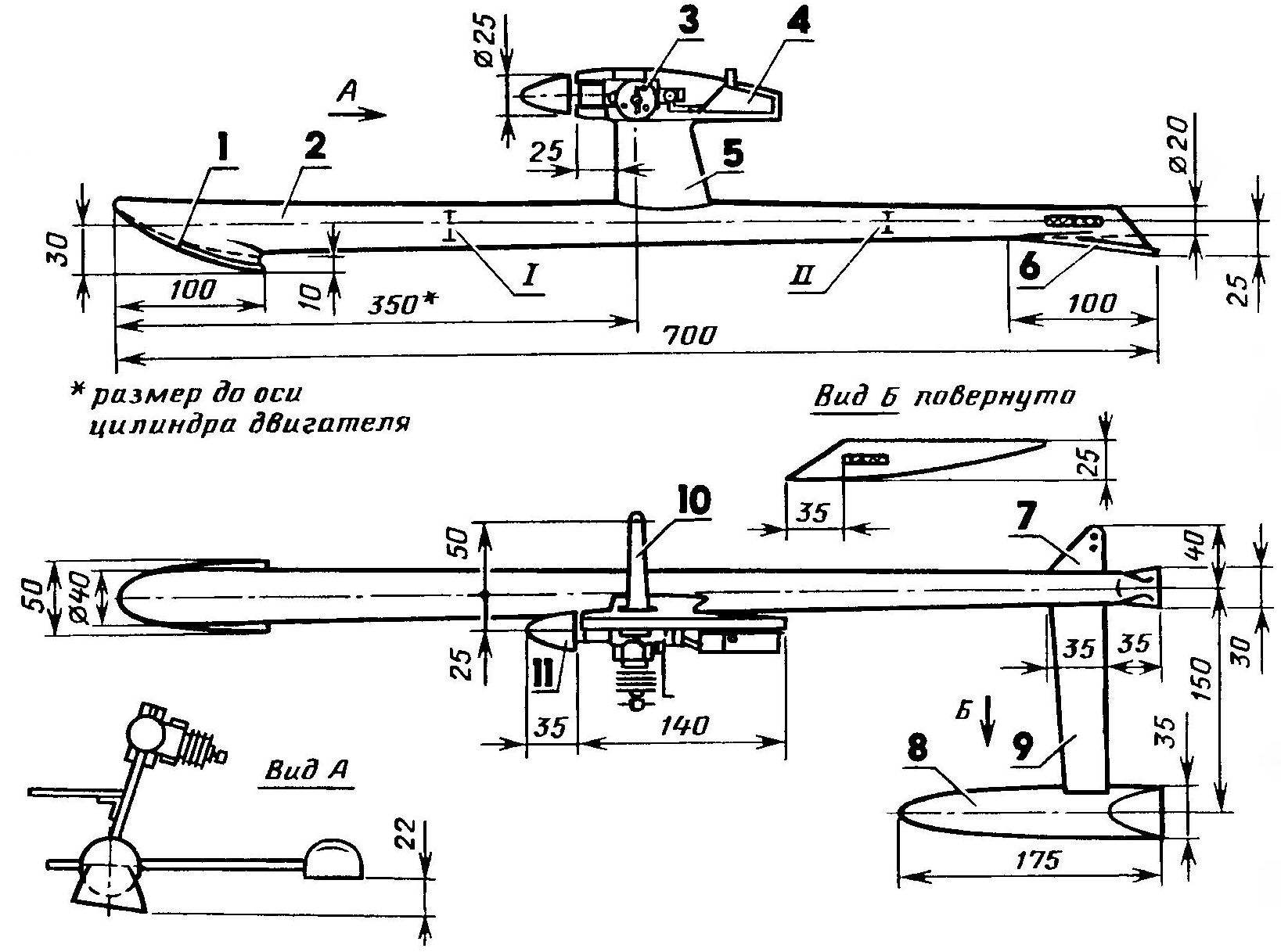 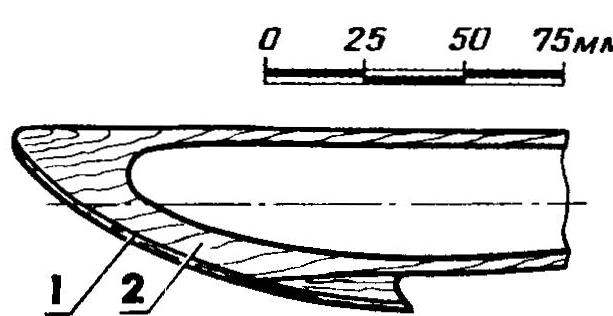 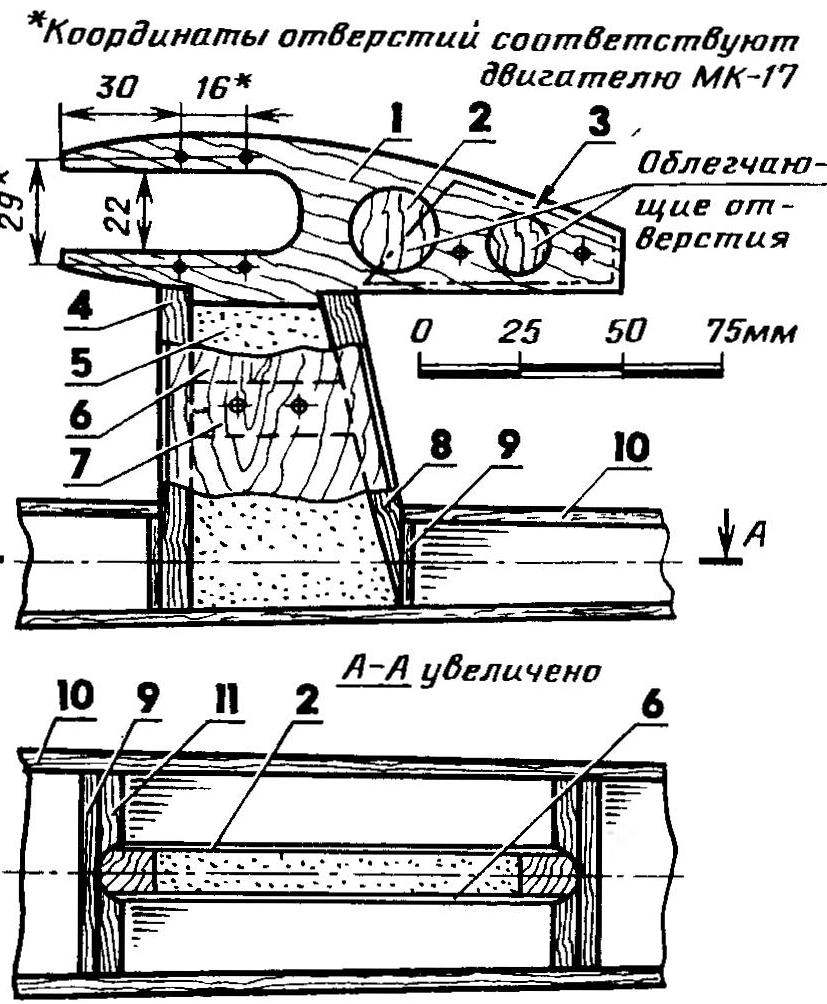 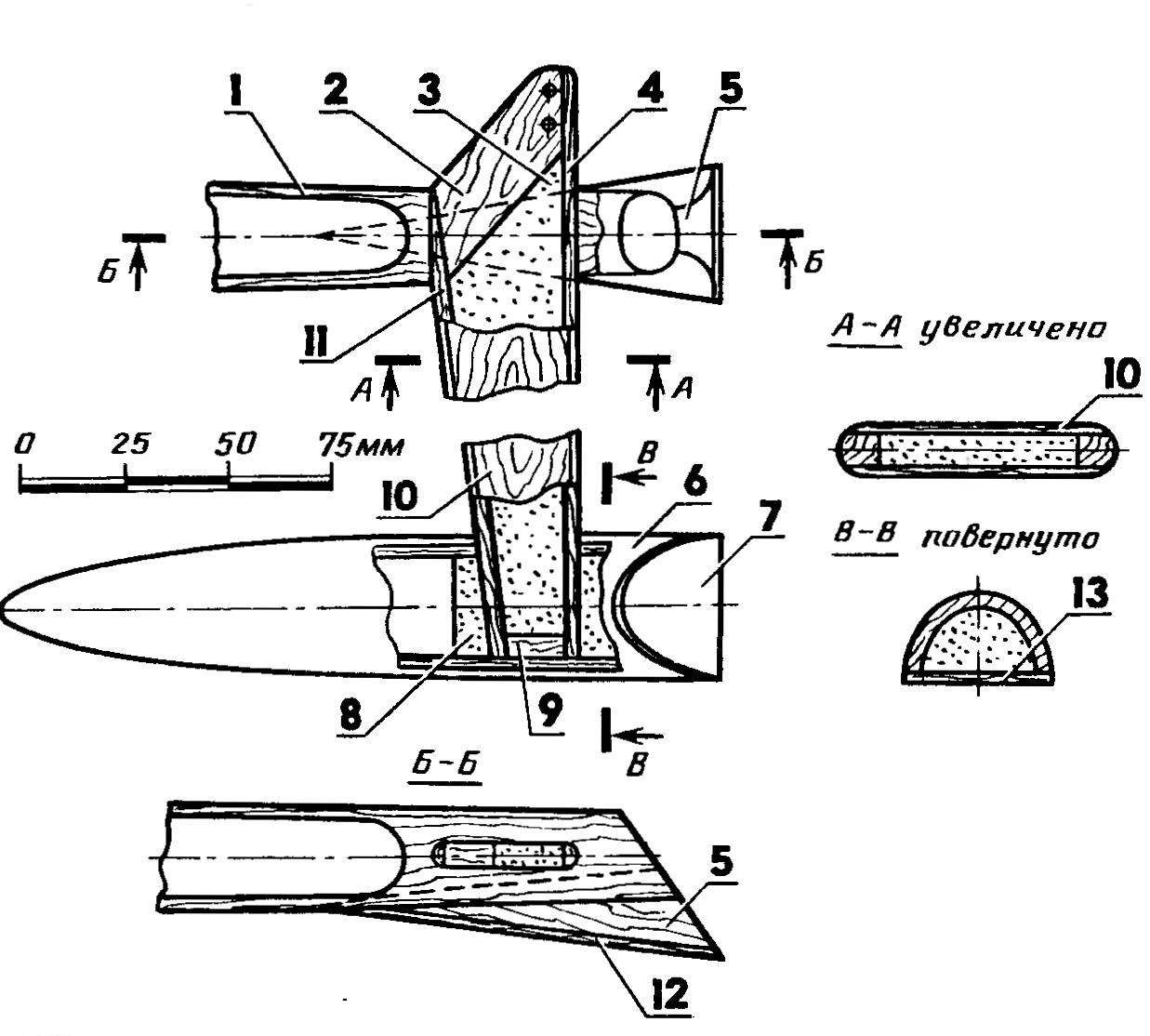 Templates for the manufacture of a propeller. 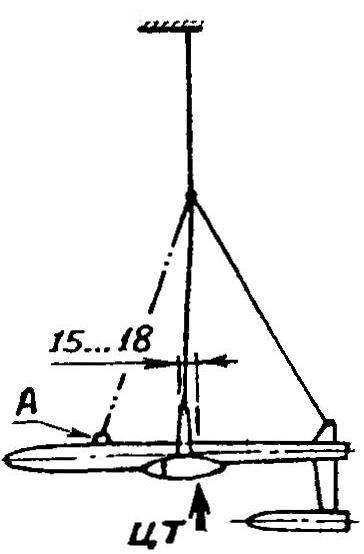 Balancing the model on the “bridle” of the suspension. 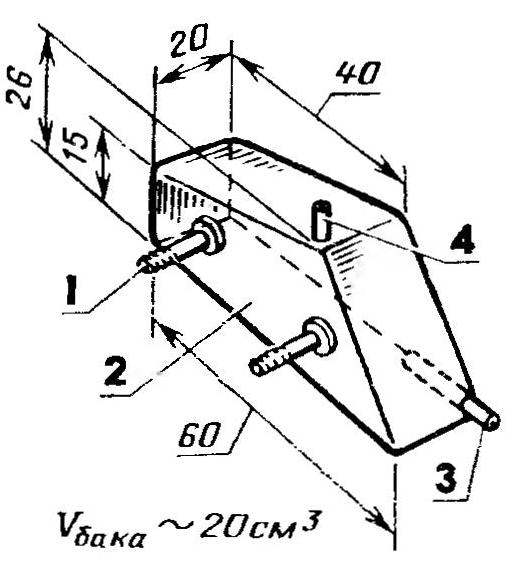 Fuel tank:
1 — screw MH (brass, solder in the holes of the wall prior to Assembly of the housing tank). 2 housing (tin-plated sheet s0,2…0.3). 3 — the supply pipe (copper). 4 – gas-drain pipe (copper).
Design the rest of the nodes in the model shown in the pictures. Any features they like and the technology of their production, have not. The only thing I would like to note with full confidence in the quality of gluing, ensuring the tightness, you can eliminate the foam filler in the design of the wing bracket of the float. Strength and so it will be quite sufficient, but the mass of the tail part, getting rid of double glue line for the entire area of the foam core, is significantly reduced.
External finish assembled model glider is the repeated application of nitrocellulose lacquer with the subsequent coloring of nitro – or synthetic enamels. The best variant — pre-cover all surfaces of fiberglass with a thickness of 0.03 mm on a two-component parquet lacquer. However, this technique can not always be offered to athletes students.
On the airboat installed domestic compression Microdrive MK-17 “Junior”. As is known, such motors have to be refined in order to increase the power and stability of the regime, and also improve the launch. Of course, the force of the engine often reduces its resource. However, MK-17, after competent and accurate completions subassemblies where, for example, not slide back rod, the piston moves in the sleeve without bias, the spool is pressed with measured force to the rear of the crankcase, etc., capable of even speed limits show resource, superior to the original. Propeller specially adapted to the revised “Junior” and is designed for solid wood type hornbeam or beech, in the extreme case of birch.
In conclusion, a few words about the alignment of the model on the “bridle” of the suspension cords. At first the front shoulder starts the “frenulum” is duplicated extra bundle connected with located ahead of the hull point “A”. After the development of the young modeller a technology start-up additional ligament is removed. Reassurance helps to avoid gross errors and to quickly work out a method throw such a whimsical device, as modern high-speed airboat.
V. TIKHOMIROV,
the head of the circle