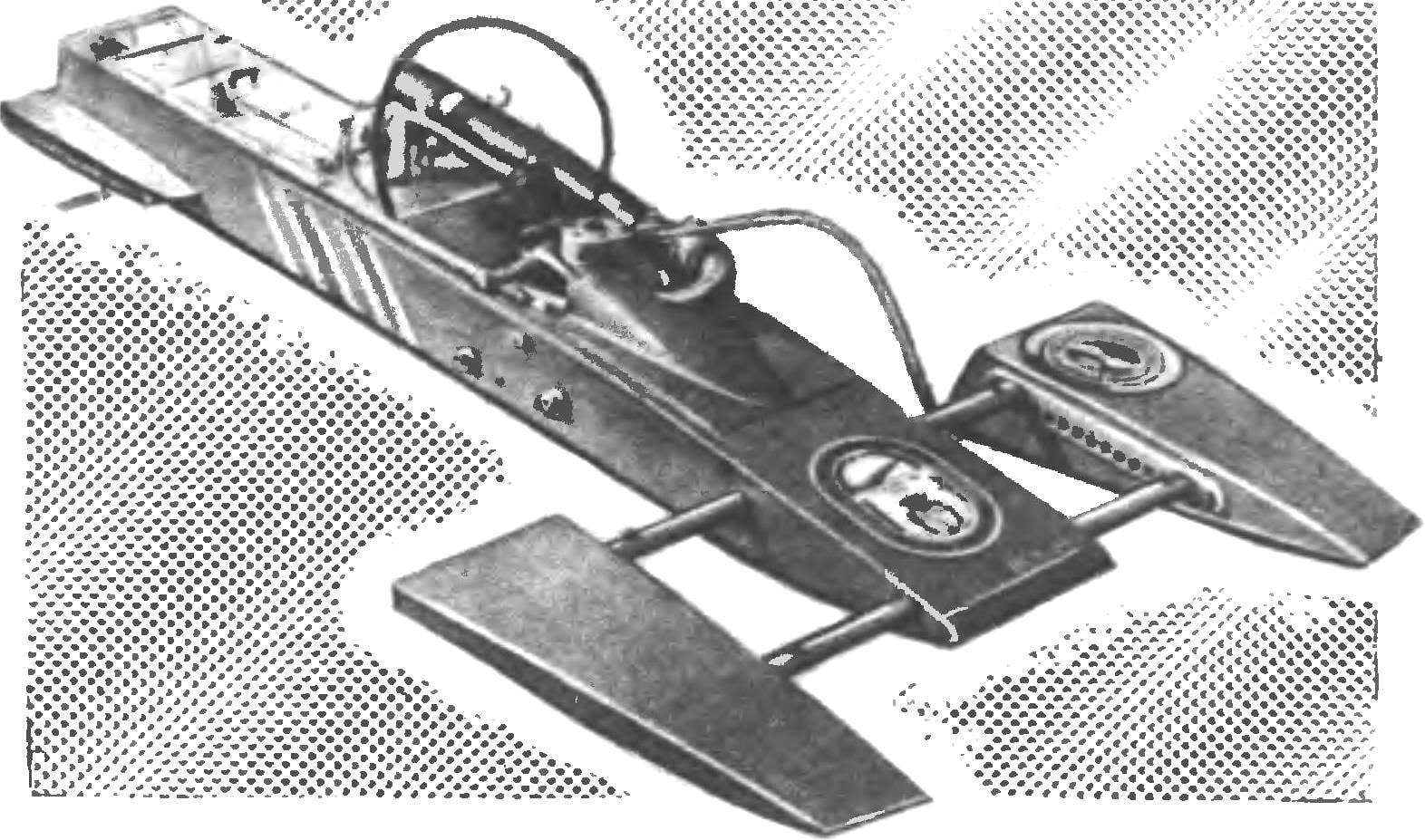 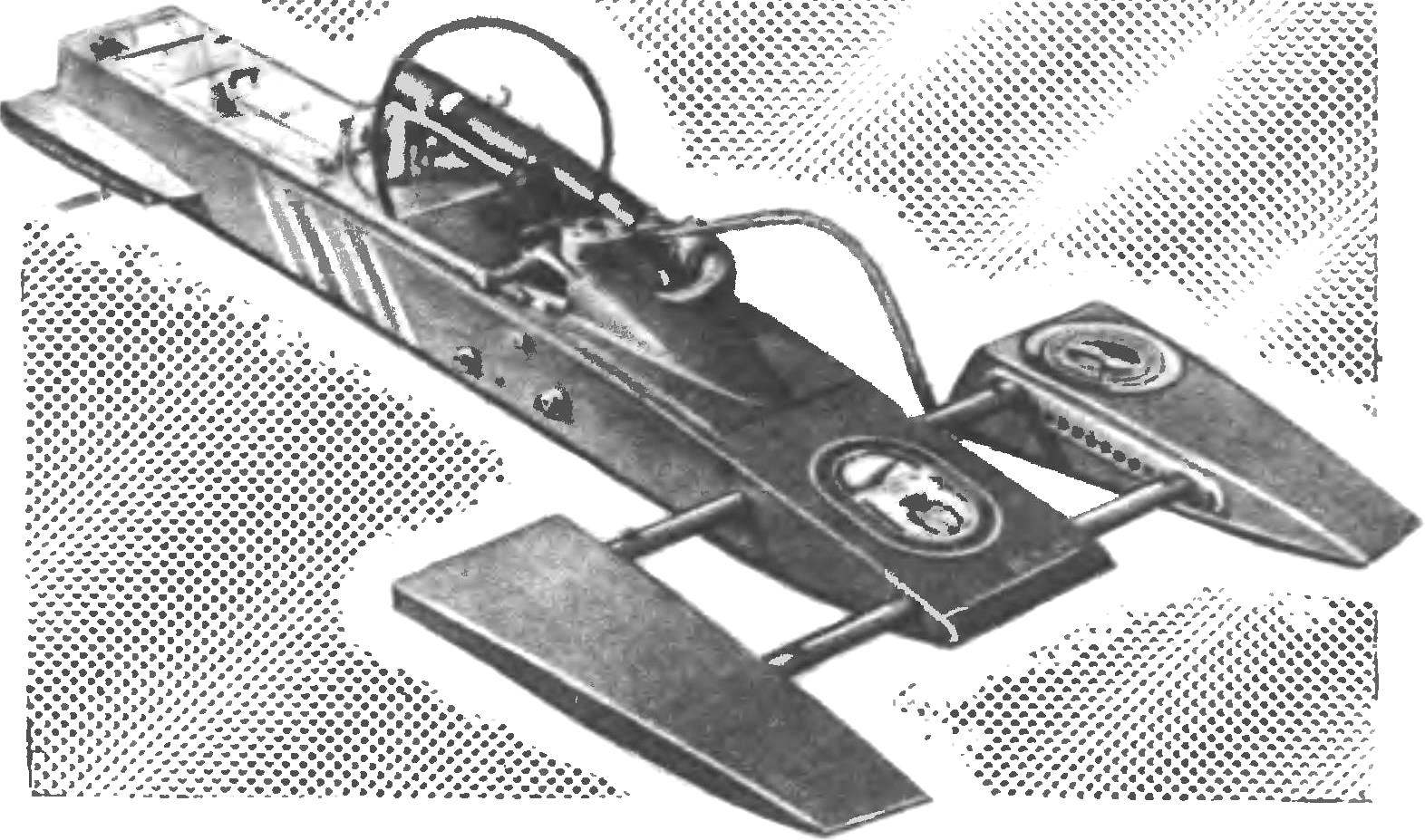 The popularity of not so long ago, the class of boat Hydro n today remains very high. In some Western countries, interest in new high-speed gliders eclipsed hobby other RC models. It’s not so strange. In established sports school a professionalization of equipment, and the average Modeler has become extremely difficult to compete with the masters. A class “Hydro” up to the present time the design of the glider remained simple n easily replicable. Attractive another factor. The fact that the average speed “Hydra” (about 100 km/h!) two times higher than any other boat. Of course, once you try to control such appliances, few people will want to come back to “snail”. Race track is very simple (oval, around two “pylons”), In one race at the same time involved up to five athletes. This increases the intensity and passions of sports and entertainment competition. By the way, even the simplified system of reckoning. No tables for specific speeds or seconds. The winner of each race gets the maximum number of points, and each subsequent participant, the corresponding place in the race.

Apparently, the class “Hydro” would get a high “rating” in our country. Knowing that a number of cooperatives is launching a radio equipment of acceptable quality, it is possible to predict the General growth of popularity of radio-controlled types of models, and hence “Hydro” in particular. For those who are just planning to begin to engage the gliders, and for more experienced athletes will be useful familiarity with the technique, successfully used by the Swedish constructor of ship models A. Westerberg. He participated in a number of world Championships and “on the shoulder” he and prizes at the competitions of such high rank.
Hoping that we have available motor a working volume of 3.5 cm3 modern schemes, we provide a description of the model “Hydro-3,5”. In General terms the planing of the already-established layout. It should be noted that in working through the knots the author relied on the design principles, put into practice a racing boat famous athlete F. Bryagina. The main difference is the use of A. Westerberg engine Rossi with the exhaust pipe pointing towards the rear wall of the housing (like aircraft engines). However, it got set on “exhaust” polukoltsami additional pipe for connecting the resonance of the exhaust pipe. But the results of the races say that a few unexpected decision does not lead to a noticeable power loss, n in this embodiment, the airboat is practically not inferior to those, which is the engine brand of the OPS. 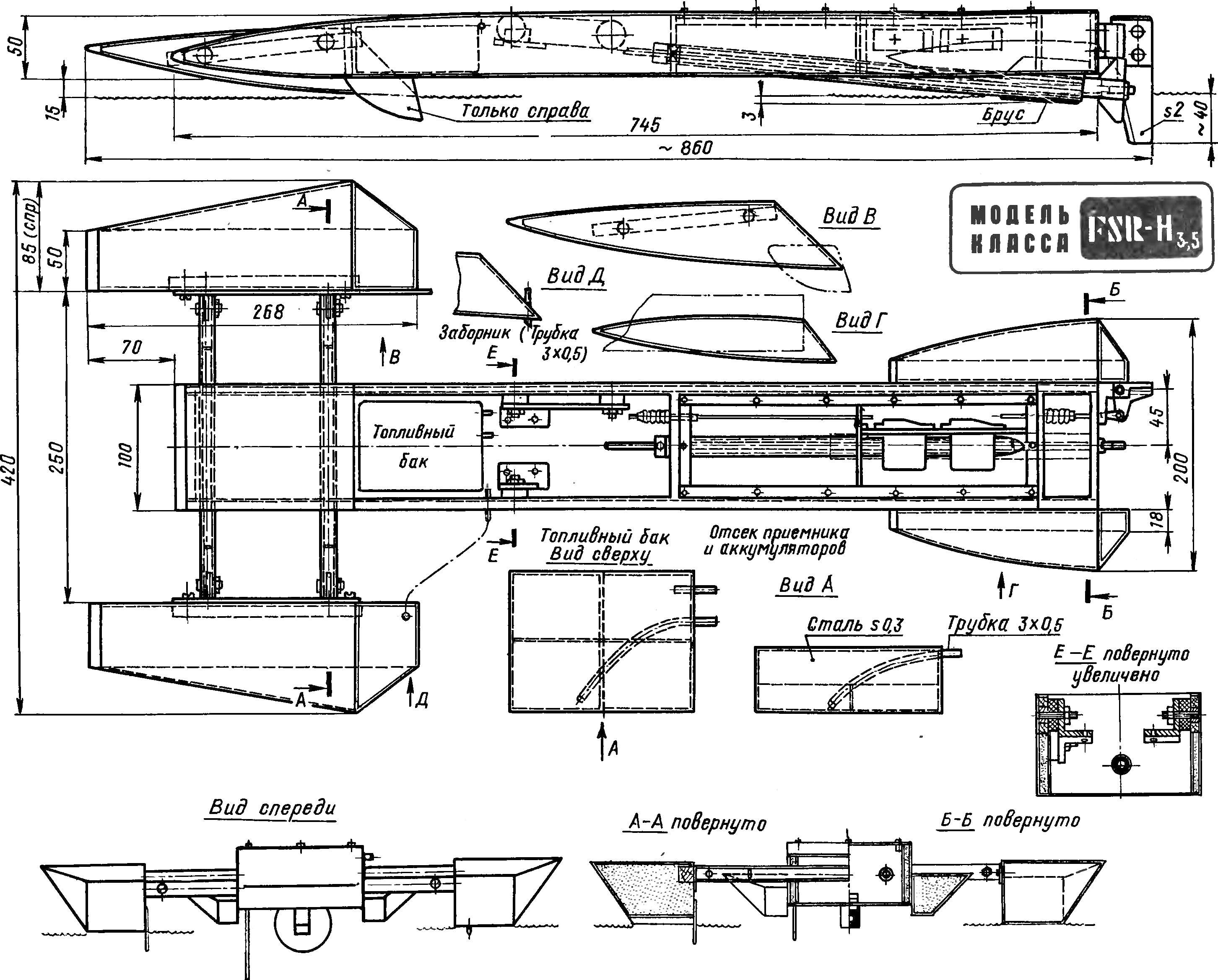 RC speed sudomodel with the engine a working volume of 3.5 cm3.
The airboat is created, by our standards, without the use of scarce materials, or required they are in very limited quantities. For example, balsa is only as a sandwich filler power side of the hull where it is with a full guarantee may be replaced by a foam type of PVC or PS-1-100. After gluing the balsa blank sides of the outside of the plywood with a thickness of 0.6 mm are drilled in the filler socket n they stuck plugs of solid wood with metal threaded inserts. Subsequently, in NH will include bolts hinges engine mounts. Semi-side polished (thickness balsa laminations must be equal to 6 mm) and the same are sheathed with plywood on the inside. In our case, the veneer thickness of 0.6 mm can be replaced by insulation (pressshpana, which is the same thing), or plywood out of three layers of Whatman paper. With all the “frivolity” of the source material the end result may surprise unfamiliar with this technology — so durable and water resistant ersatz plywood. The only requirement: at the time of manufacture is necessary to select the resin such density and curing time to ensure complete impregnation of the paper. For this purpose, well proven resin ED-20.

Side view.
All the frames of the hull are cut from the same “sandwich”, which is on the power side. Only the bulkhead in front compartment servos are made of plywood 3 mm thick. the hull bottom and deck parts are made of sheets of plywood with a thickness of 1 mm. Both compartments of the apparatus have a common frame of wooden slats with a cross section 8×8 mm, which holds 12 sockets for the fastening screw transparent cover. Of the same rails and guides made, employees “slider” single pane of steering engines. The transom of the hull is sandwich construction, and the bow is closed by a lath of hard wood. 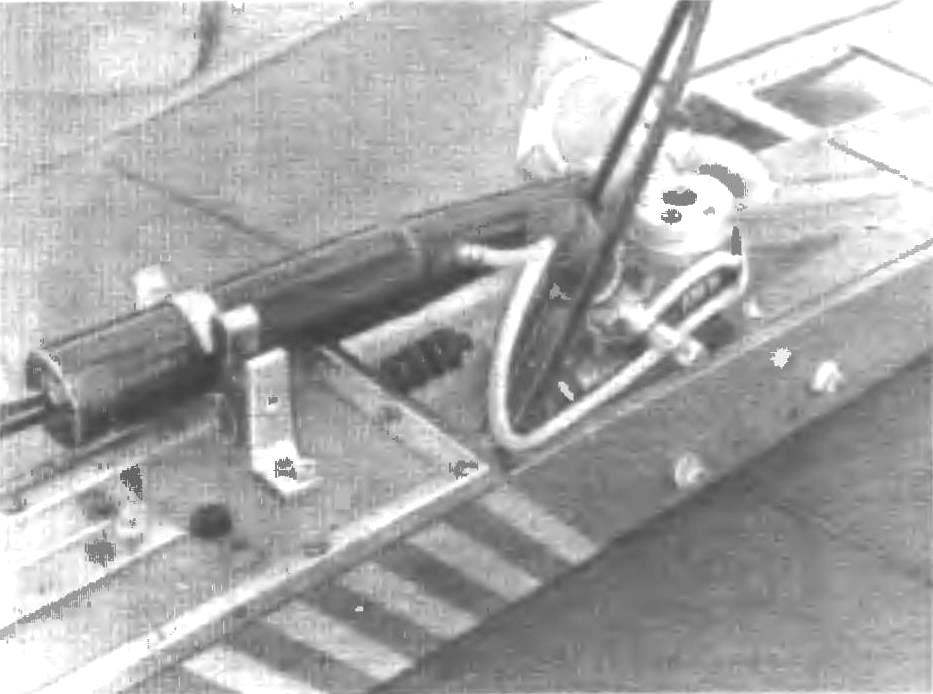 The engine compartment of the hull.
All floats equal-power scheme. This is a unit filler of rigid foam, lined on all sides with plywood 0.6 mm. the Aft floats are strengthened front rails and then mounted on the housing. In the front before gluing the internal elements of plywood sheathing first mounted the bars 10х10х150 mm of solid wood. These details will need to privertyvali dural plates, the pins within the collet of the beams. Themselves the cross beam (they are the same, front and back) — the dural tube Ø 12×1 mm — tightly sealed in the main building. The right front float has a keel plate and the left tubular intake water for cooling the engine. Jacket it connects the silicone tube. 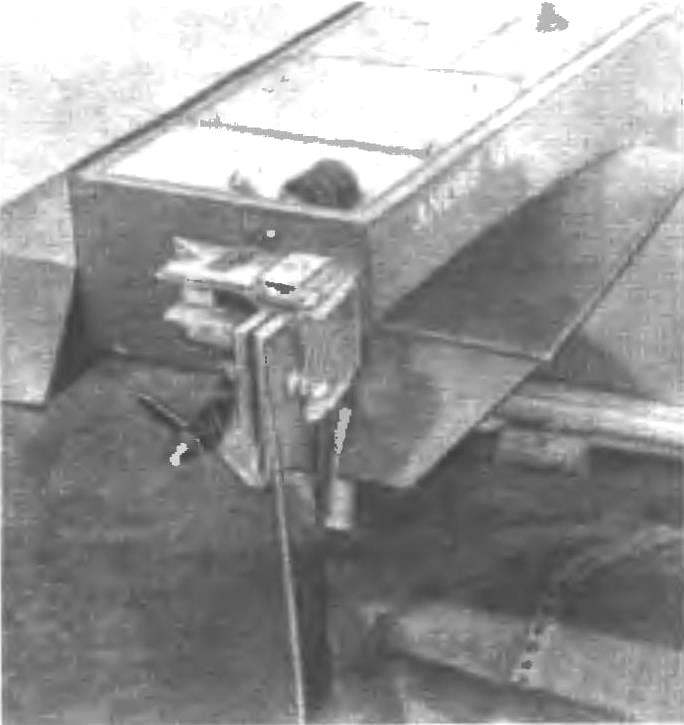 Suspension of the rudder.
The engine is placed on the corner Motorama made up of line segments of the profile-area of cross-section 30x30x3 mm. Characteristically, to compensate for the inaccuracies of the Assembly and stresses that distort the shape of the hull during a race, the engine mount is fixed on the sides only at three points — two on the right and one on the left. Each of them represents a rubber washer-isolator with a through-bolt or welded MB. Fuel tank with a cross partition, preventing flow of fuel, soldered from tinned sheet thickness of 0.3 mm.
The propeller shaft is housed in a stern tube, bearing three bearings (two slip and one front needle). Shaft diameter 5 mm, on the end is threaded M5 for fixing of the propeller. The size of a tubular piece of deadwood Ø 12×1 mm. is Optimal for engine “Rossi is 3.5” can be considered screw company “Acture” series Х447 (two-bladed, Ø 40 or 75 mm step). Starting from the middle compartment apparatus of a stern tube stern tube included in the box. Its walls are made of plywood with thickness of 1.5 mm, and all of it in General is additionally fixed in the housing primodal to feed domestic timber. In addition, stern tube box performs a very important function — it is the bottom slice is the rear redan and sets the load level of the disk of the propeller and engine. The author recommends that when you debug the glider to glue on the bottom of a thin plate protruding from the sides of the box at 2-3 mm. Prune it only if you are clear signs of too little load on the propeller. Another possibility to adjust the engine and its mode selection is the aforementioned plate-lining thickness.
Control of gas engine and a rudder is carried by rods exiting the pressurized volume through the corrugated thin-walled rubber tubing. Metal rudder has a sharpened front edge and a blunt, smoothly cut back. All areas associated with the breakdown around the model of the surface water, the author recommends that the maximum sharp edges on the case. And all the rest, not in contact with water, moderately dull to reduce aerodynamic drag.
Ya VLADIS
Drawings high-speed radio-controlled models Swedish athlete based on the materials of magazine “Modellbau Hoyt” (Germany).