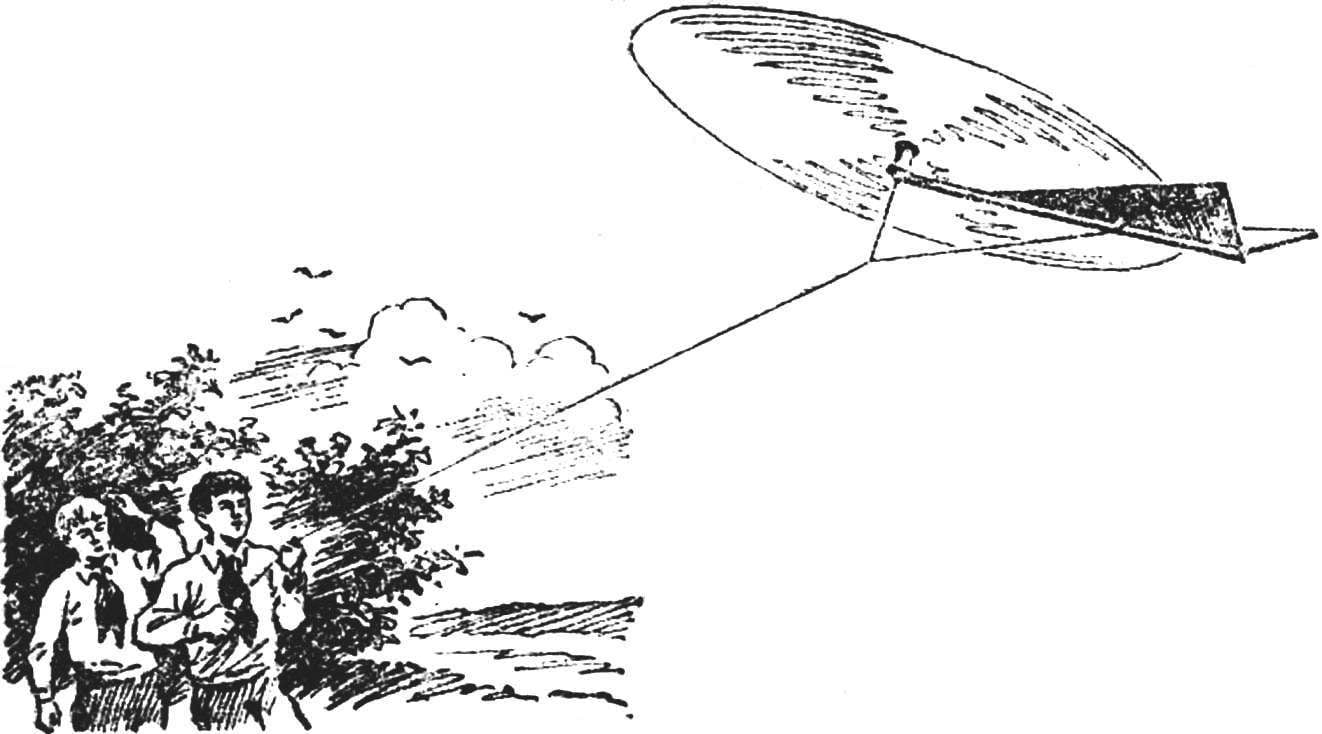 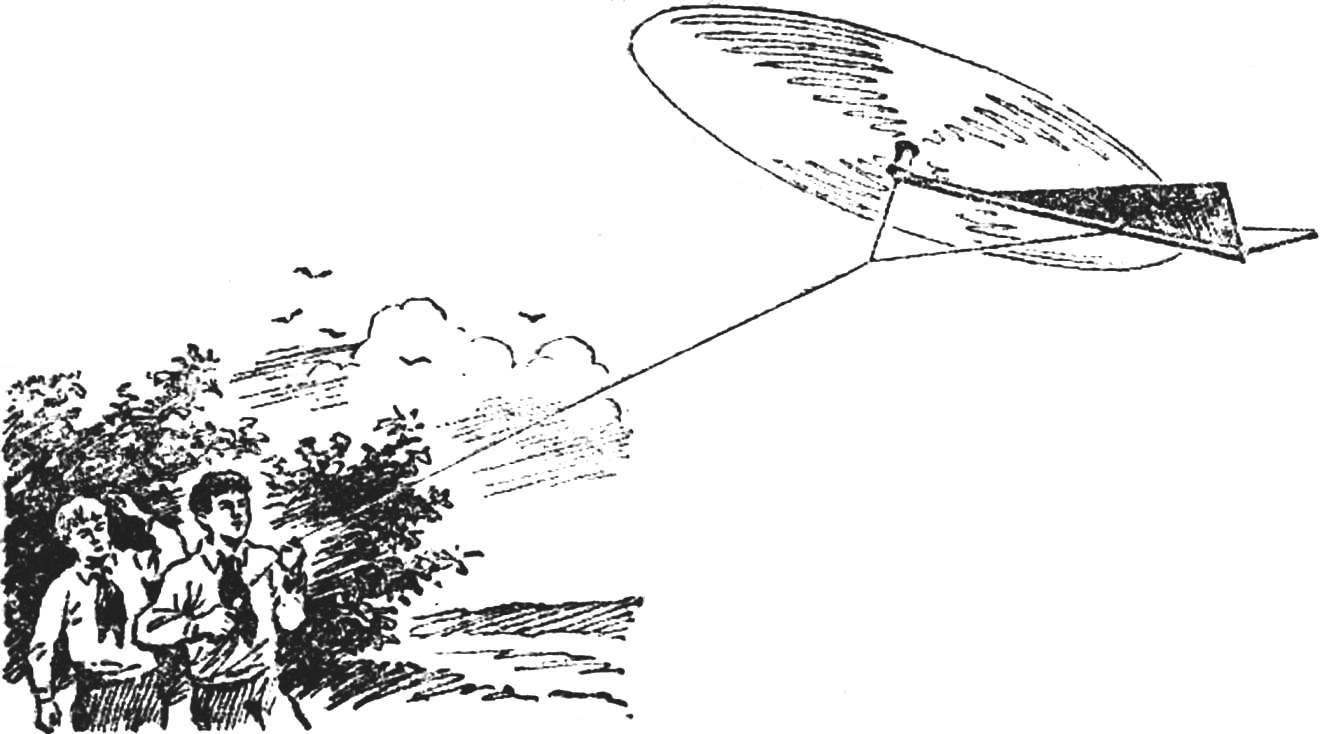 No, it’s not helicopters. Speech will go today about snakes. You ask: can l find something in common between these very different devices? It is possible… the fact that the serpent flies by created any element of the lifting force, be it habitual plate, box frame, covered with paper, or something else. In short — you need a lifting force. And for its creation can be as “something else” to come and propeller similar to a helicopter, or the wheel of Magnus. What kind of wheel? Explain in more detail.

German scientist G. Magnus in 1852 discovered the effect of air flow in the rotating pipe: the incident on the pipe transversely to the axis of the jet is deflected in the direction of the seam. There were even attempts to use this effect on the ship: regular sails tried to replace the tall hollow tubes. They move with the propulsion system, and lateral wind deflected back cylinders-sails, have created a kind of jet thrust.
But the snake put the engine seems to be useless, so we need to solve the problem — how to get the reels spinning. Again we turn to history and remember that Savonius was known as the inventor of the self-rotating drum. He cut the cylinder in half along the axis and displaced by these halves relative to each other. Thus it is said spinner, one part where the air flows about and the other as if it rakes in his “pocket”, creating resistance. This difference causes the drum to spin. At the same time manifested the effect of education lift.
Now, when we look into the possibility of a flight like kites, try to make them. 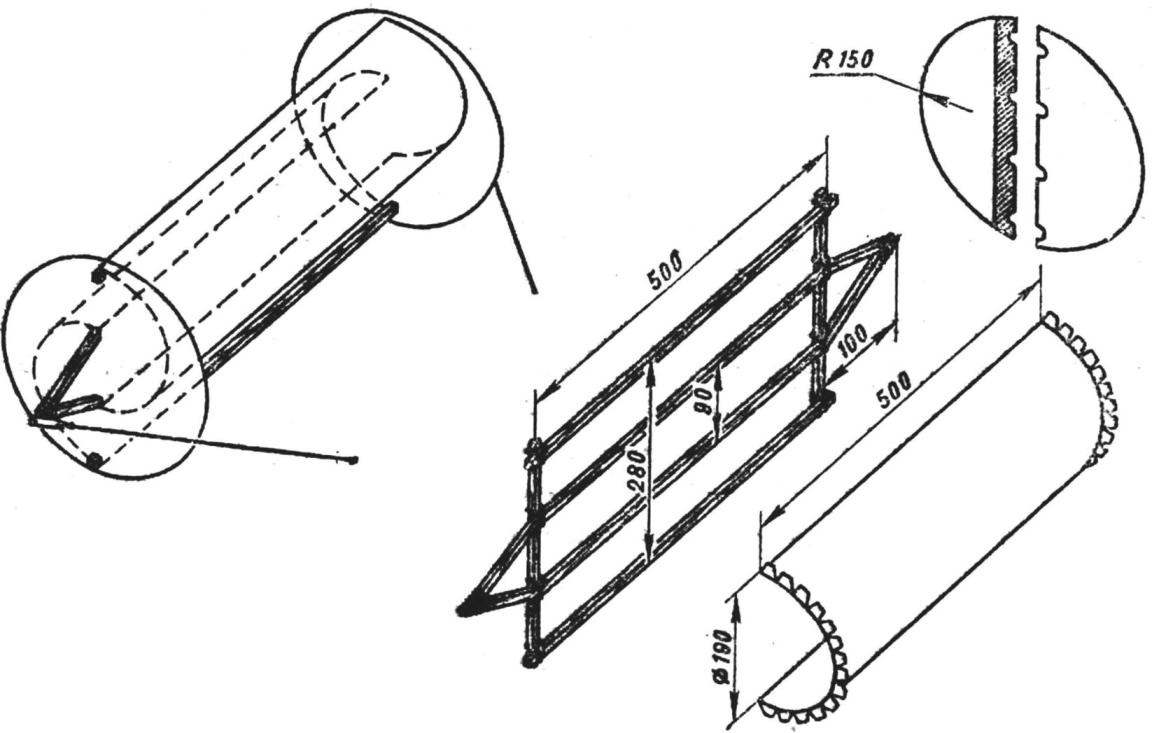 Fig. 1. Snakes-turntable and its details.

Fig. 2. The serpent-chopper of simplified construction.
This will require a pine slats, thick drawing paper, thread and glue. Stock up on a few office paper clips or thin nails.
So we’ll start with snake-turntables. It is shown in figure 1. Cut slats for the frame. Their cross section of 4×4 mm. All the slats are assembled with thread and glue. When the frame is ready, attach to it pieces of wire (paperclip), which will rotate the turntable itself. On these axes need to put a small loop of tin to the bridle. The ends of axes, bend or solder it to the metal washers so that the loop is not dumped.
Now take a piece of drawing paper and cut out four of the semicircle. In each you need to make four cut strips and then on the frame in pairs to glue the sheets of paper to form two round cheeks. Measure the distance between them, prepare rectangles of paper with cut edges on two teeth. Prying them loose, you can paste the resulting “blades” between the cheeks.
Gathering of the snakes, try to run it. Better to do it when there is moderate wind. Do not forget about the tail that is needed for this snake. When you start the turntable, place always so that it would be rolled in on the wind, which “pocket” any of the blades catch the air below the kite.
If you don’t like waving tails, you can get rid of them clasped together for a few fans. This garland hanging in the sky, it will look very interesting, especially if you rescuetime paper, for example, gouache or watercolor.
On the same principle you can build another chopper. It is shown in figure 2. The main difference is the absence of frame, which is replaced by a single slat. And cheek one. It is better to cut out of cardboard, which punched the hole for the rack-and-spar — to it, stick the folded tabs of the blades. The blades are glued to the spar, wherein the pre-bent according to the shape of the letter
The following two serpents also represent turntables, only built helicopter scheme. They have a lifting force creates a rotating air screws.
Carefully considering figure 3, cut into slats. Contact they are also using yarn and glue. Rotors you can do this: tie the criss-cross rails-the side members. Saturate the knot with glue and letting it dry, drill the middle hole through which will pass the axis of rotation. It is better to make a thin nail, its cap will serve as a locking washer. Axis (placed on her by the rotor) is bent from the bottom loop and wound to the end of the transverse frame rails.
The tail is done the same way, only its rotation axis must be directed not up as two carrying propellers, and ago. 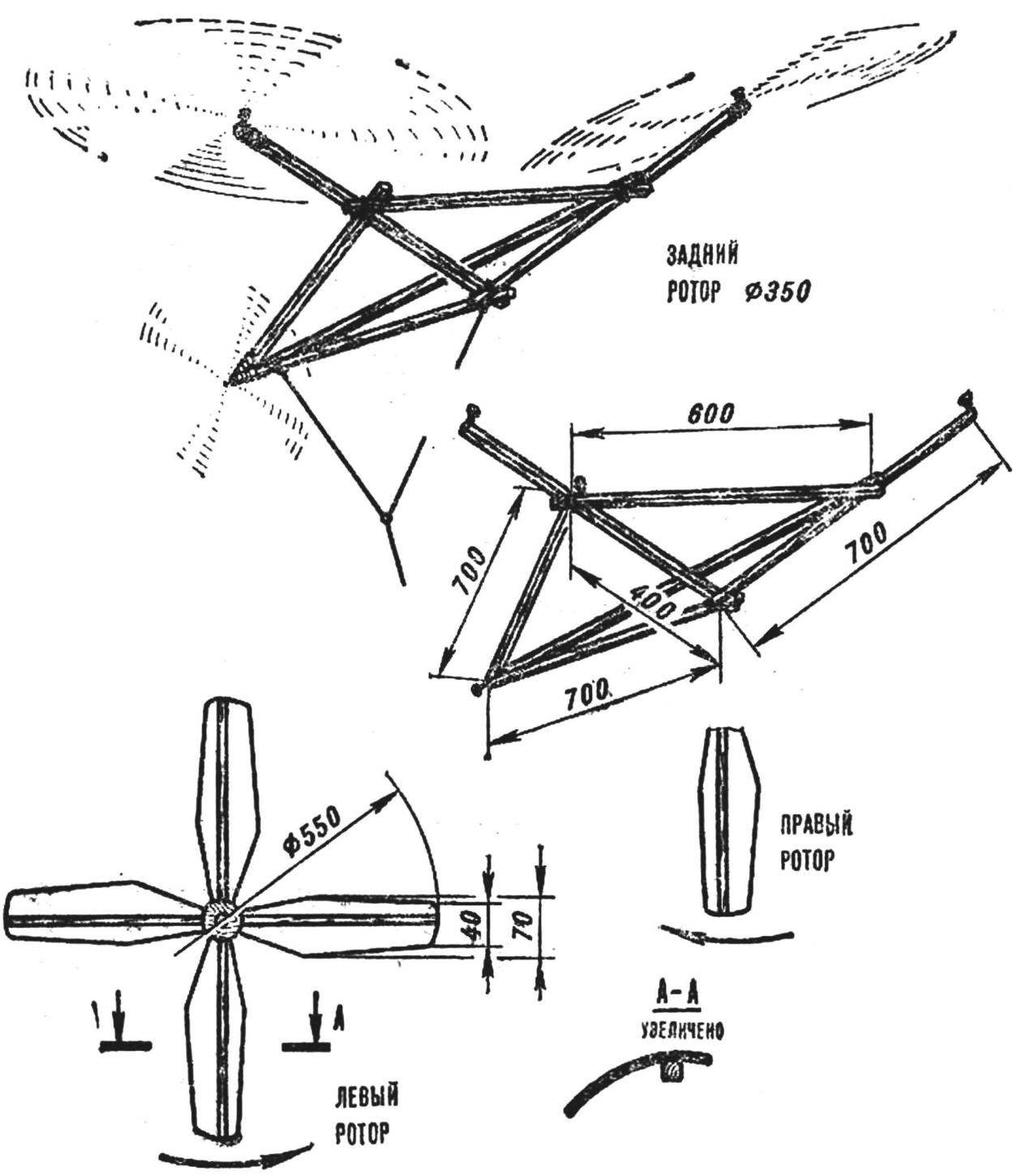 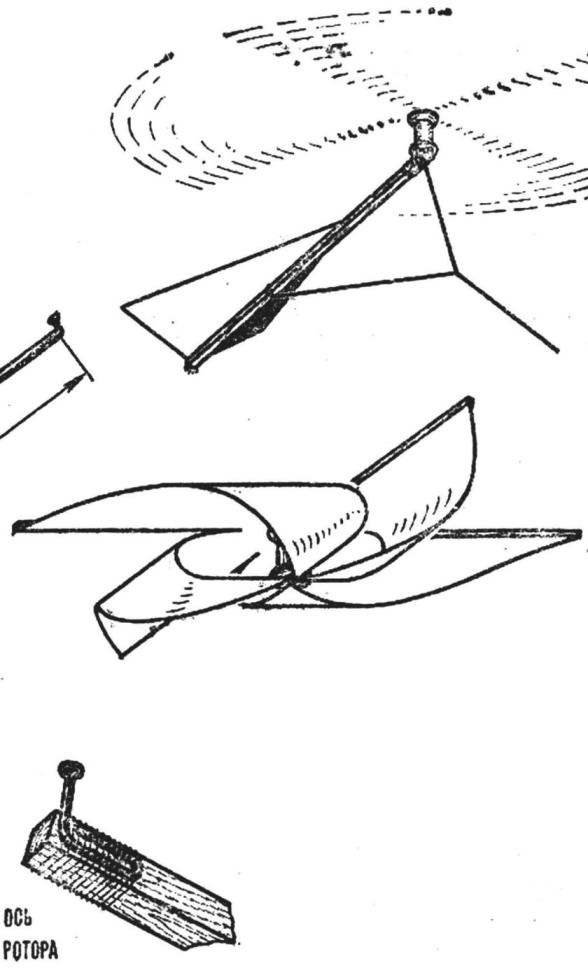 Fig. 4. Single serpent is the helicopter.
The blades of paper cut. Give them a concave profile, and glue on the spars screws.
When you run this, and all similar kites, wait until the wind spin up the rotors. Only then the device can be released from the hands. And the stability on takeoff is provided by selection of the length of the rear line of the frenulum (the tail of this snake is not needed).
Past the snakes is the easiest, and looks original (Fig. 4). The rotor for it is made from a sheet of drawing paper the size of 500X500 mm, which are cut diagonally almost to the middle. The outer corners are bent alternately to the middle, and to increase the strength of the blades at the top it is necessary to glue the slats with the cross-section 3X3 mm. Curved ends of the blades are glued to the spacer bushing — coil the threads from where you joined, and reinforcing slats.
“Fuselage” is also cut from wood planks, and “stabilizer” of paper cut and glued.
The bridle on this snake consists of only two lines, although it is necessary to select the length of the back. The model flies steadily even without a tail.