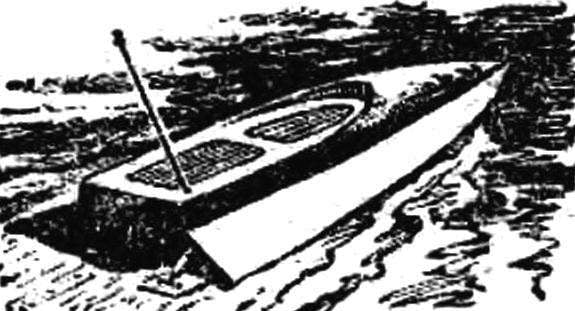 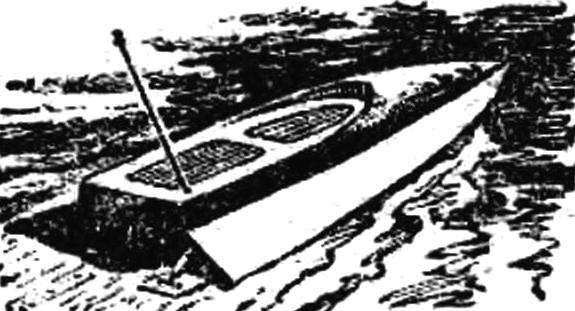 The model, which will be discussed, applies to the class of high-speed RC models with electric motor total weight of over 1 kg (F1-E>1kg). According to the world Association of ship modeling and ship modeling sport (NAVIGATION.) it belongs to the class of radio controlled. This is the most numerous class of models denoted by the letter F and a numeric index. For model class F1 (F1-V2,5; F1-V5; F1-V15; F1-E>1kg) the basic requirement to perform a “flight” in minimum time: the winner of the race, which I sudomodel showed the least course time.
Form of the body, such models are virtually the same — a bottom recess of the deadrise, longitudinal planing steps and cheekbones of a particular form. As engine I the class F1 V2,5 use of internal combustion engines volume of 2.5 cm3 running on water or air screw, in the class of F1-V5 — from 2.5 to 5 cm3, in class F1-V15 — from 5 to 15 cm3, in both latter cases, working in a water screw.
The body is laminated on the matrix of two layers of glass, of a thickness of 0.3 mm and epoxy resin.
Bulkhead and transom are carved from Styrofoam brand PHV-1, and the sliding cover of the cockpit is made of fiberglass with a thickness of 0,6 mm.
Propeller — variable pitch: the hub 65 mm, and the ends of the blades 75 mm screw Diameter — 52 mm. Made on a milling machine from duralumin brand D16T.
Deadwood integral is made of duralumin D16T, shaft — spring-wire Ø 3 mm. the Latter rotates in bearings n 10 000 83 external Ø 7 mm.
Motor homemade vessel; its outer diameter was equal to 52 mm, weight — 740g, it is excited from permanent magnets stamps КС37. A power of about 1400 W, the rotation frequency is equal to 14 thousand rpm.
The battery consists of 22 items STSs-3, current 63 A, the Model is equipped with a switch for two speeds: low — powered engine of 11 sections and is full from 22 sections.
Radioapparatury management model, the Japanese system “Futaba”, the receiver is shielded.
The launch mass of the ship — 3400 g, time course and 17.3 C.
Having made drawings of a similar model, conduct sea trials. A few tips on maintenance. 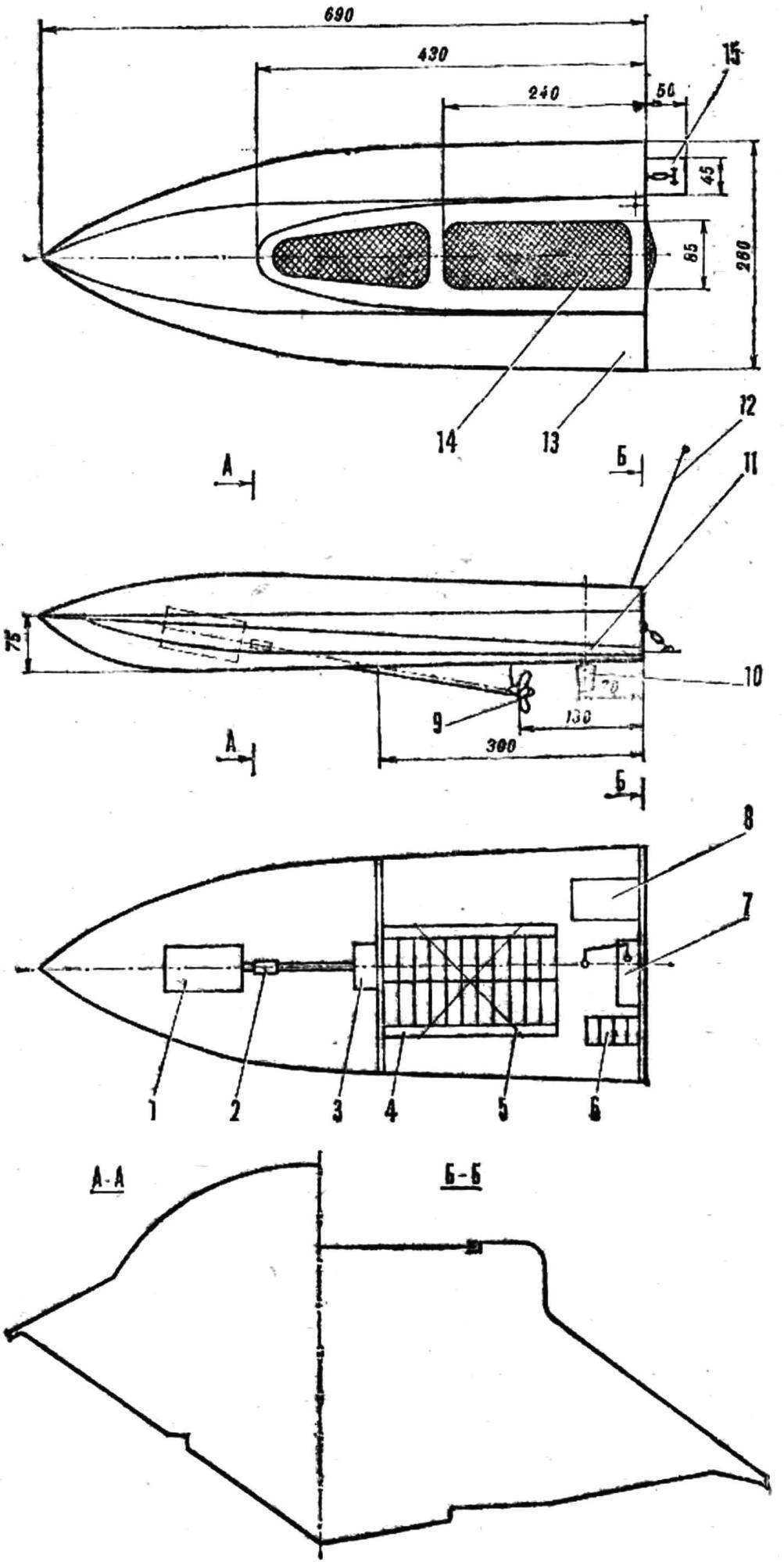 Speed RC:
1 — power motor, 2 — clutch, 3 — switch, 4 — box power batteries, 5 — rubber tubing, 6 — battery power radio, 7 — servo 8 — receiver, 9 — thruster, 10 — rudder 11 — longitudinal redan, 12 — receiver antenna, 13 — housing 14 — slip cover, cockpit cover, 15 — transom plate.
Before you start check the operation of the equipment with the engine running. The first launches on the water (at low speed) rudder angle is about 25° in both directions, and the output of the model at full speed, this angle should be reduced.
If while travelling on the calculated velocity model does not come in a straight line, use the trimmer and after a run return the trimmer to the neutral position, leaving the wheel in a position that was at startup.
Remember that the speed of the model depends on the position of the center of gravity (CG), it increases the displacement of the latter to the stern. However, a large transfer of DH back is fraught with loss of stability.
To compensate for the torque of screw COG shifts away from the median plane on the value determined experimentally. The same purpose is the deviation down transom plate. However, there may be trim on the nose.
The described model does not have positive buoyancy, and if her body will be broken, it will collect water and will be at the bottom. In order to facilitate its search, the model should be equipped with a rescue buoy.
Rollover model the keel up battery secure stops from foam and rubber harnesses.
A. LANDSMAN, master of sports of international class, champion of the USSR 1981, Kiev