With the end of the Civil war in Russia and the formation of the Soviet Union began intensive development of commercial aviation. July 15, 1923, opened the first regular air line Moscow – Nizhny Novgorod. For three and a half months by air it was transported by 270 people. In the following year there was a line Odessa – Kharkov, Moscow – Kharkov, and others. The development of Civil aviation is objectively required the creation of a passenger aircraft. One of the developers of passenger “air carriers” was the aircraft factory No. 1, former “Dux”, where in 1925, the engineering team headed by H. H. Polikarpov, and A. A. Semenov established a five-plane PM-1.

Zapoznanstva aircraft factory No. 1 of p. P. Uspassky and senior design engineer of the same enterprise, L. D. Kolpakov-Miroshnichenko proposed another original project of large passenger aircraft. At the beginning of October, 1926, the sponsors have directed the leadership of the air force and society of aviakhim offer on construction of the aircraft “Airbus”:
“Having relevant experience in the design and construction of heavy aircraft, being members Aviachim and wanting to actively apply his work experience and knowledge in the public works on the reconstruction of the desired state of air transport, we started to design passenger cars with a large radius of action and corresponding payload from the materials and engines exclusively Soviet production. The project is envisaged (taking into account the latest technical requirements of the Scientific Committee of the air force) the use of this type of aircraft for bombing purposes, the transfer of staff, transport of wounded, urgent transportation of small units of 20 – 35 people.
The design and construction will be made by a qualified factory workers and technical-engineering staff at a Moscow aircraft factories, after hours through the factory cell Aviahim.
Introducing the attention of the Bureau Aviahim master data and the shape of the projected plane, we turn for assistance to implement the project and ask to be included in the work program of the upcoming operating 1926 -1927 years, with the allocation of costs for the construction of the specified aircraft required amounts, according to the relevant estimates”.
The cost of designing the “Airbus” was estimated to be 7900 rubles., and when the building was supposed to meet the 36 800 rubles.
We offer Kolpakov-Miroshnichenko and Uspenskim “Airbus” was a biplane with two motors in fan-shaped racks of the box wings. The air screws are supposed to apply pushing. “In relation to the material plane is a semi-metallic design with a large bias to the wooden parts.” The fuselage and wing box had to be wooden. Chassis, racks boxes, management was supposed to be metal. All materials and accessories intended to be used only for domestic production.
In addition to the main passenger destination “Airbus” could be used as a bomber, torpedo bomber, sanitary or transport aircraft. “What distribution of goods produced with the appropriate centering device, easy pendants of shells and the corresponding weapons and machine gun fire on the turrets”.
Uspassky and Kolpakov-Miroshnichenko described “Airbus”:
“On the nose of the fuselage there is a place for sentry gun with two machine guns providing fire almost the entire front area. With the wings on the upper part of the fuselage includes mounting the second turret with two machine guns that protect most of the back sphere.
The place for installation of bomb racks for small and medium sized bombs up to 5 pounds designed inside the fuselage at the center of gravity. Suspension outer shells large size (torpedoes) under the fuselage provided with appropriate chassis design.
Estimates for the construction of multi-passenger plane “Airbus” RUB.

Estimates for the design of passenger aircraft “Airbus” RUB.

Aircrew is placed in the front part of the fuselage directly behind the front turret, outside the scope screws. The review of pilot ensures good visibility during day and night flights.
Passengers are accommodated in the Central fuselage. The project provides, in General, only twenty-five seats.
Depending on the required range at the expense of fuel it is possible to vary the number of passengers. For instance, if 25 passengers with a total weight of 1875 kg of fuel remains (from 2500 kg payload, together with fuel) 625 kg about four hours of flight. At 6 hours the device with no overload takes 20 people.
In the upper Central plan placed gasoline tanks where the gasoline enters the carburetor by gravity.
Such a location of the gasoline is much easier to the whole system of power engines and at the same time frees up space in the fuselage for the necessary equipment.
Motor group located on the racks of the box and encompass, in addition to the engine, oil tanks and radiators. The whole motor installation consists only of metal parts, wearing aluminum top wrap the Koch brothers. The remoteness of motor groups from the wings, petrol tanks and wooden pieces is very valuable, firstly, in relation to fire, and secondly, the convenience of access to parts of the motor from either side and, thirdly, lightness and rigidity of the installation, which was confirmed in practice.
Start the engines in the wing stroke is performed with using starters.
In design everywhere provides for ease of Assembly and adjustment, repair and low cost in production.
In the passengers cabin everywhere made the comfort and amenities essential for long flights.
The strength of the device according to the norms of the tax code of the UWS.”.
The Chairman of the NC UWS Dubenskiy, having considered a proposal Kolpakov-Miroshnichenko and Spasskogo, October 18, 1926, notified the sponsors and the management Aviahim that the air force fundamentally opposed to the implementation of the project, but its implementation should not prevent the main program Aviatrust in aircraft. 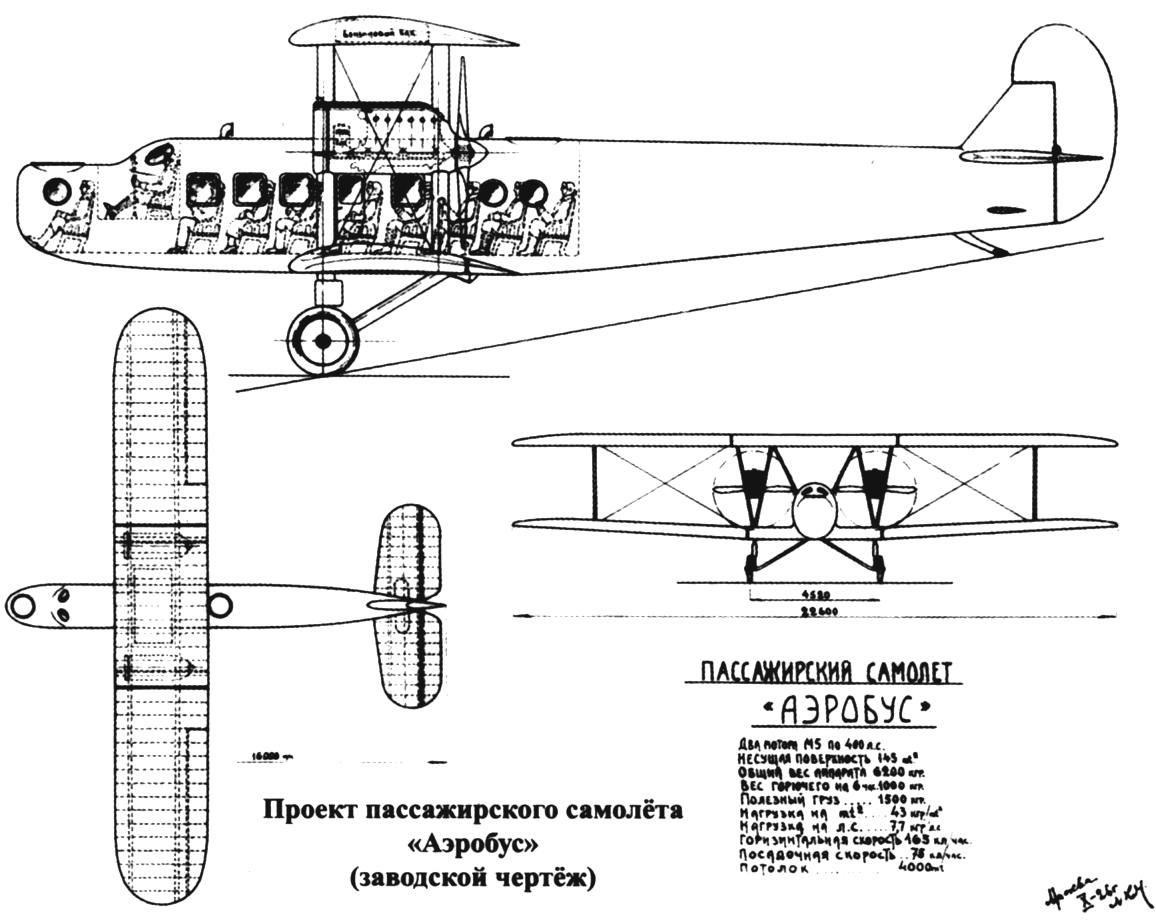 The project of the passenger plane “Airbus” (fabrication drawing)
Since the air force has not fundamentally objected to the “Airbus”, but money for construction not identified, the user Aviachim and Inspection CAF has appealed to the concerned organizations.
Chairman of the management Board V. Yu. Ukrvozduhput Yungmeyster in the letter No. 135/s sent on December 14, 1926 to the inspector General of CAF, said that Ukrvozduhput suggests “be based solely on aircraft plant”. At this time in Kharkiv built aircraft aircraft designer K. A. Kalinin designed for 3-4 passengers.
From society Dobrolet in the CAF On December 27, 1926, received a letter, which stated that the use of “Airbus” is not possible. Due to adverse climatic conditions in Central Asia and Eastern Siberia combined design was assessed as unreliable. In addition, Dobrolet average flight carrying 4-6 passengers. So the plane’s 20 passengers was too great. Guide Dobrolet expressed a desire to get the plane “twin-engine with power reserve for up to 6 passengers fuel for 4 to 5 hours under motors BMW-BMW III or IV metal construction, the ceiling is not below 4000 m”.
Following consideration of the project “Airbus” together with representatives of societies of air transportation, it became clear that the stated characteristics are excessive. It simply could not find a suitable application. A similar situation occurred in the development of foreign passenger aircraft. There in the 1920s, was dominated by passenger aircraft, carrying 4 -10 passengers.
Basic data of the aircraft “Airbus” 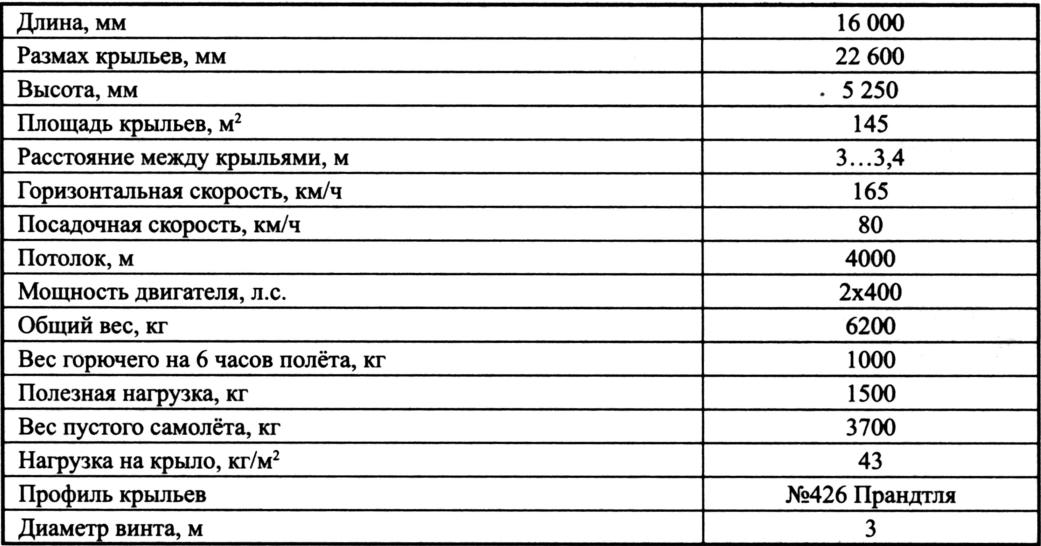 In this regard, Chief inspector of the Civil air fleet V. Vishnev 27 Dec 1926 in letter No. 322333/s to the management Aviahim stated: “At this time, the plane proposed by design and flight characteristics for our civil aviation is of no interest”.
In ten years the volume of passenger traffic increased significantly and they took the aircraft a relatively large capacity. But this time, aviation science in its development has gone far ahead, so the project “Airbus” experts no longer remembered.
A. KIRINDAS