In 1983 in the framework of the fifth world championship of model rockets have passed the international competitions on radio-controlled raketoplana class S8E. Our athletes in this class, yet do not act. Bring to the attention of modelers interested in the characteristics of missiles S8E, the drawings and description mo;n WHETHER full-time of the winners of these competitions F. Barnes.
The rocket plane is made from balsa. The nose of the fuselage glued veneer thickness of 1.5 mm, the tail of the tubular beam is made of two layers of thickness 0.75 mm. Vilejka it was conducted on a conical mandrel. Over the nose of the fuselage mounted pylons carrying three-ply paper container for the engine.
The stabilizer and fin viscolene of the plates 3 mm thick At their trailing edges on nylon hinges hung rudders are actuated by means of steel wire rods Ø 1 mm. edges of the feathers of usepty around the perimeter by gluing a strip of thin glass. The fuselage, stabilizer and fin are covered with dlinnovoloknistoy paper on the nitrocellulose lacquer. 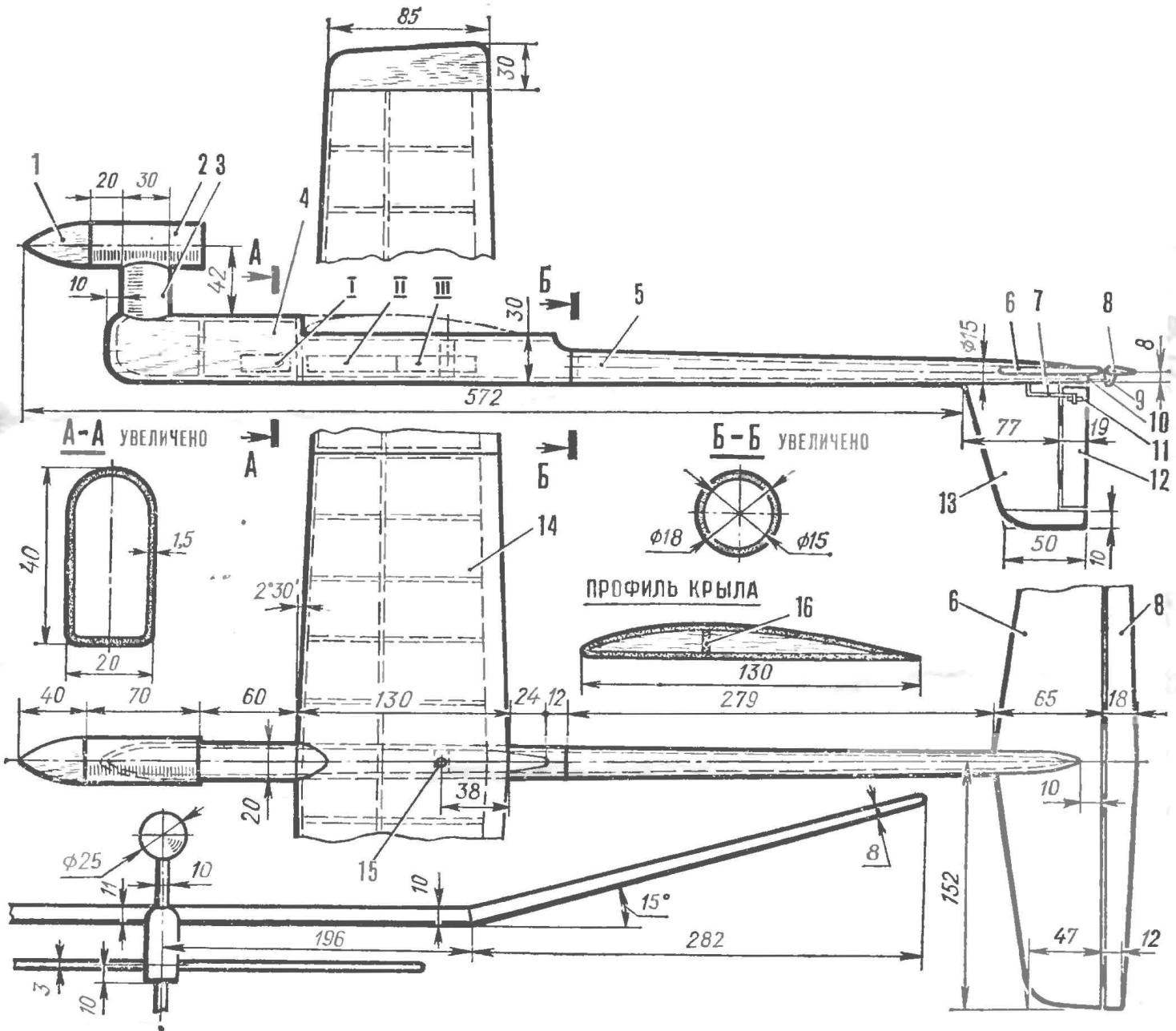 1 — objectice, 2 — container model rocket engine, 3 — pole, 4 — nose of the fuselage, 5 tail beam, 6 — stabilizer, 7 — pull rudder, 8 — Elevator 9 — pylon rudder, 10 — pull rudder, 11 — horn of the rudder 12 and the rudder, 13 — Kiel, 14 — wing 15 — wing mount screws, 16 — spar;
I, II, III — a battery, receiver and servos (respectively).
Wing PLANO-convex profile with the highest toldyou the center 11 mm and thickness in the area of tip 8 mm. Technology wing Assembly is as follows. For a plate thickness of 1.5 mm, cut to the shape of the wing in the plan, glued the ribs and the ending between them is fixed a spar. Treating a set of sandpaper, enhance the Central part, cut a mustache on the back of the lower trim panel, then put glue on the top sheet of the same thickness. After drying, the workpiece is cut, and the center console are glued at an angle of 15°. The manufacture of the wing ends with the treatment of edges, and additional reinforcement with fiberglass tape and thin close-fitting long-fibre paper. The weight of the ready wing is about 50 g.
To control the rocket applied to a miniature receiver, which, together with two steering servos and batteries has a mass of 65 g. Model takes off on a single rocket motor total impulse of 40 n*s and a running time of about 9 s. the Starting weight of the rocket plane 220,
R. VIKTOROV