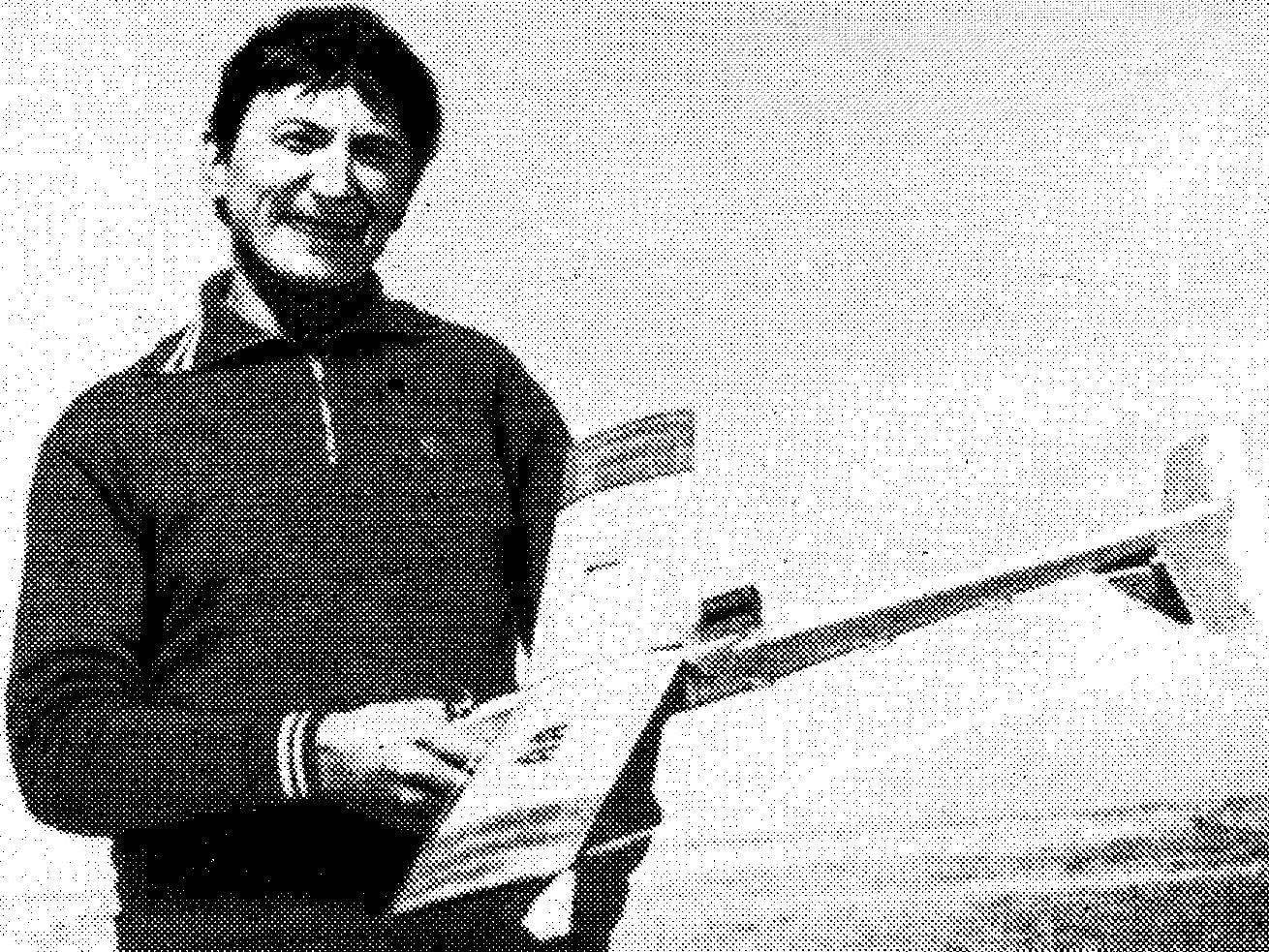 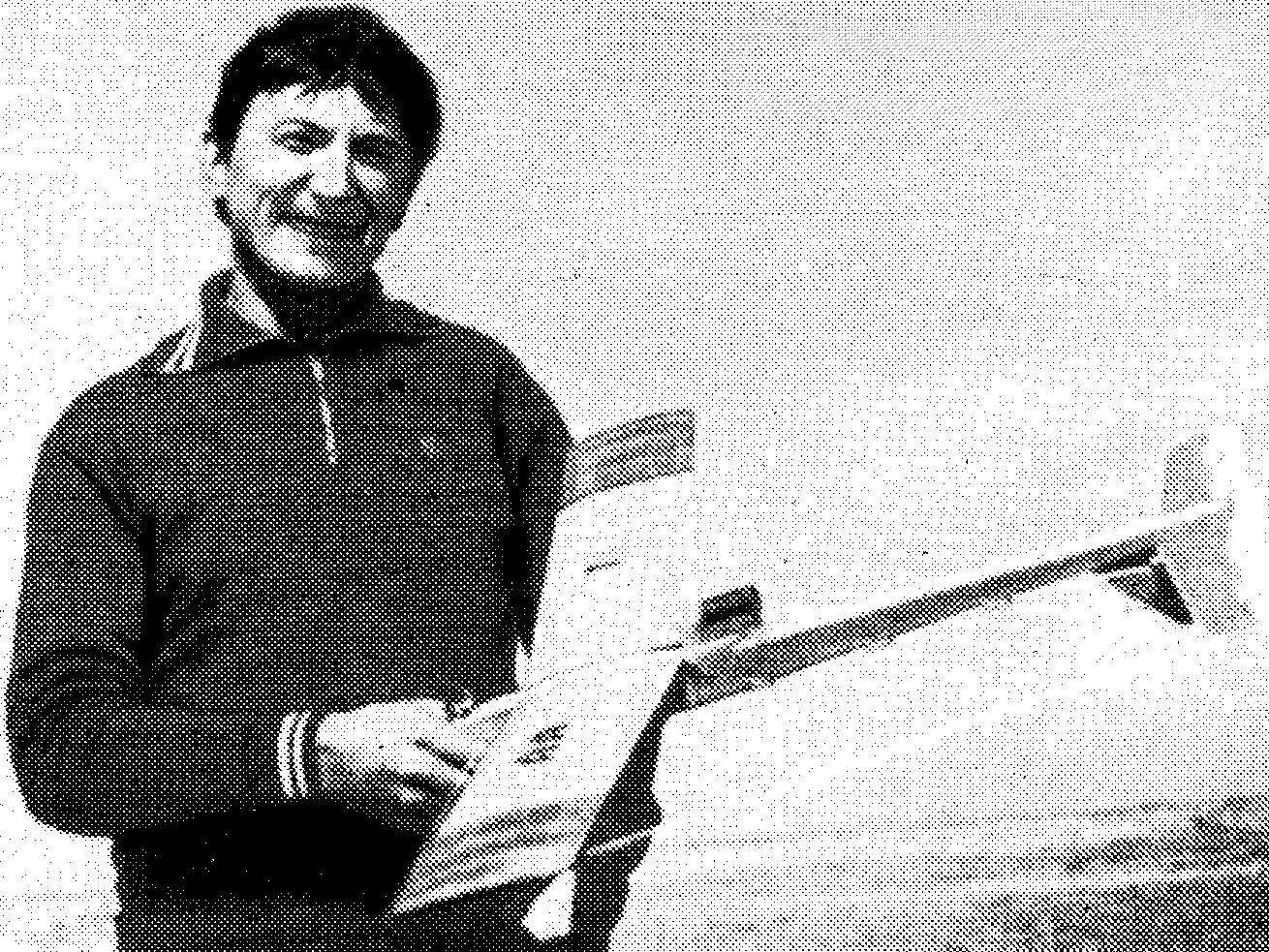 In the fall of 1978 with a group of rocketmodeler I was going to leave for a training camp in the Crimea. Literally the day before our departure from there to Central aeromodelling club have a telegram. Concise lines brought good news — the world record for flight duration by model raketoplana exceeded Valery Myakinin.
For many modelers it was a surprise: Myakinin, acknowledged enthusiast of small aircraft — and suddenly “the rocketeer”? And what! We all could not wait to arrive soon on the charges.
And here the Express train Moscow — Simferopol rushes us to the Crimea. Almost in the end didn’t leave me thinking about the world record. Still, it’s one of the first great achievements of the Soviet rocketmodeler-athletes. But the more I thought about Valerie.
Yes, the length of the rocket modeling classes (at the highest level) only once visited the training camp in preparation of the USSR team for the world championship in Bulgaria. Then Valery did not get into the top three athletes, departing for the world championship, but the charges he’s made it as a “rocketeer” a good school. It was then that he decided to undertake; attempts a record flight duration of raketoplana.
Skeptics were abound. Frankly, I don’t really believe in future records V. Myakinino. Then, in his success he was firmly convinced a p. Zhidkov is the coach of the Soviet rocketmodeler. Ally Myakinino believed the coach should be a big model aircraft experience. Zhidkov, Valery helped to Refine the receiver is to simplify it, have provided reliable on-Board power radios.
…Our acquaintance was held in the summer of 1964, held at Kharkov national championship in the sport aircraft modeling. We then played in the same team — the national team of the RSFSR. V. Myakinin, at that time a student of Kazan aviation Institute, radiomodule, I rezinomotornaya.
In the final Protocol of the competition, his name was listed in the second ten. Among the “operators”-the only pilots in those years the unquestioned leader was V. VD Khumri from Voronezh. He took over Valery all the best. Went to train VD Khumri, with him always gone and Myakinin.
Only later, once the conversation with Valery, I found out that its first model he built in fifth grade. It was a miniature glider. He flew it doesn’t matter. But for Valeria, the main thing was more-an indescribable feeling of joy — the model flew! It with new forces build new. Even then, the head of the circle E. Kudrin has noticed that this persistent lad, it would seem that the old design has consistently sought to introduce some innovations…
Three years later, after graduation, Valery was sent to work in Dubna. Here he became an advocate for the team of the Moscow region. We began to meet more often, become friends. But to see him in “the thing” at the event I had rarely. Our starts took place in different places, as for some time the competitions of aeromodellers were divided into several classes: conovici (and I spoke with the cord model-copy) competed in Noginsk, Elektrostal, and “radio operators” “flew” in Dubna and Serpukhov.
The years went by. Valery firmly established among the leading Soviet athletes: three-time champion of the USSR, in collaboration with B. Skurski became the holder of the world record for flight duration models, radio controlled.
In 1976 in the USSR championship Myakinin has won all classes of radiomodule (glider, copy and aerobatic). He particularly distinguished in the model aerial “acrobatics”. 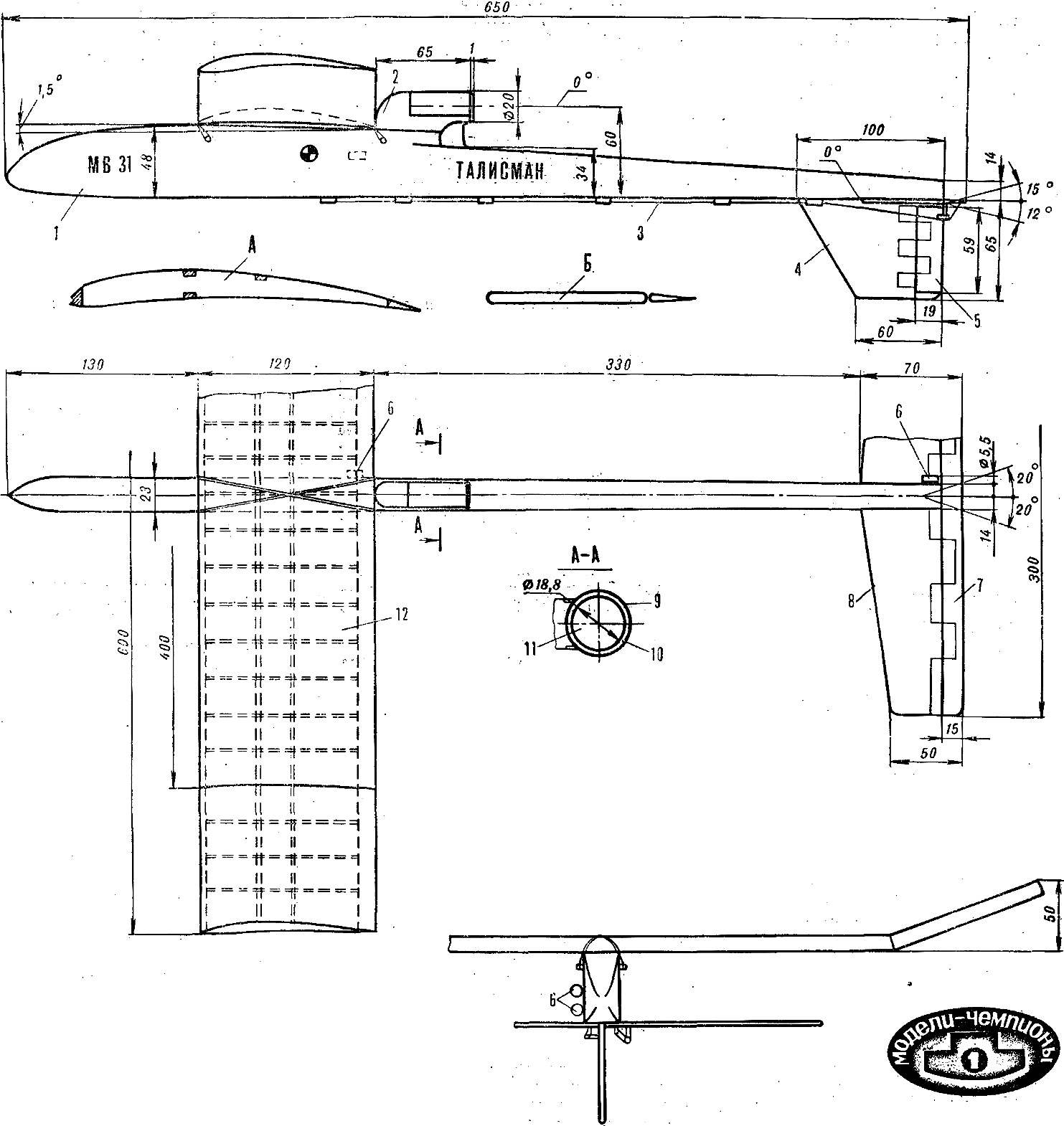 Talisman V. Myakinino (record rocket S-4-D):
1 — fuselage, 2 — pole for mounting the power compartment. — pull rudder, 4 — Kiel, a 5 — wheel rotation, b — guide rings, 7 — Elevator, 8 — regulator, 9 — container of the power compartment, 10 — streamer power compartment, 11 — engine, 12 — wing.
A — wing profile; — the profile of the stabilizer.
The model was built specially to record starts. It is a cantilever monoplane with a powerplant that includes two engines impulse of 10 n*2.5 n*s, is located on the rear of the wing.
The basic material of rocket plane — balsa. The stacked wing: ribs, the edges of the balsa spars from pine. Covered with long-fibre paper, is attached to the fuselage with rubber thread.
The fuselage is glued balsa plates. Compartment for on-Board equipment under the wing. The stabilizer and fin from a balsa thickness of 2 mm.
The weight of the structure at the time of launch — 232 g.
…Wasn’t a summer cold, the wind was blowing, sometimes it was drizzling. Some participants refused to start: with the weather models are easily losing height, they were blown away by the wind.
It took only a few seconds after the call Myakinino at the start. Earned the engine, and a model, obedient to his radio commands, confidently took off and left the area. The whole set of figures was performed at the required height and with great accuracy: the loop — without displacement, the eight — strictly in a given direction, symmetrical and of good purity. Watching the corkscrew, it was hard to imagine that this makes the model, not real plane, which is controlled by an experienced pilot. Yeah, not been in vain multi-day training on the airfield at Kimry. Three gold medals and became a well-deserved award to Valery for the work, persistence and perseverance.
Incidentally, the latter is a distinctive trait of his character. In preparation for the championship, one summer day he was doing about 50 takeoffs and landings! To ripples in the front made all kinds of shapes: figure eights, rolls, loops, bringing them to perfection. For the workout he burned an entire canister of fuel (15-20 l), while the fuel tank of the model are only 250-300 g.
…The train slowed down, and from the speaker came a voice: “Simferopol!” Even saw you on the platform of Valeria. We rejoiced for him and he as if nothing had happened, as if it was not of record. However, Myakinin at all stingy on the emotions. He may lose in the competition, break the model, but it is unlikely to knock him out. Remember in training camp he flew the rocket plane to the original design (off the wick), the other would have panicked, and he, as if nothing had happened began to make a new one.
— You brought the good weather greeted us Valery, a week pouring rain.
He helped us load things into the car, took the wheel and we drove off. There were more than two hours to Gliders.
As soon as the Car got out of the busy flow of the city on the motorway, we began to extract from Valeria the details of the record flight.
What is there to say? The best result for raketoplana in the class S-4-D American — 45 minutes, 28 seconds. I was able to show 1 hour, 9 minutes, 49 seconds.
But how was it? — almost in unison we asked.
— Yes, everything just took off, flew, got, ‘ he replied, not distracted from the road.
— No joke, my friend, — I ask.
— Yes, as usual, you know, ‘ he says, sharply twisting the wheel and almost dropping the speed on the sharp turn.
In the end we managed to shake him. Valery said that it has started on the Klementiev mountain, a place of pilgrimage for glider pilots 20 years and hang-gliders of the 70s, and a favorite place of athletes small aircraft. Created as mother nature of such terrain — just a Paradise for record flights! When blowing “Uzak”, there are such powerful dynamic threads that just fly and fly.
The model was equipped with two motor impulse of 10 n*2.5 n*C without retarder. They need to lift a rocket plane to 30-50 m. the task of the pilot at the start is to hold it during takeoff. A little gape, did not give the desired command to the Elevator — the wind will upset the model.
Before the start of Valery already two pieces of “put” there. Need skill and a good reaction — it can be compared to the reaction of a test pilot: after take-off lasts only 1-1. 5 s.
Behind conversation we have not noticed, how has approached the two-story cottage camp “Primorye”.
Here you will live, — explained the rights of the veteran Myakinin and added: by the Way, after a couple of days I want to run again your record, come.
The start was delayed. Only 5 of October, we were able to go to the mountain of Klementyev. There have already flown a model aircraft. Had shifted from them to the West for about 1.5 km away. decided to Start from the slope just below the summit.
…Long lasting training model and remote start. The measured wind direction, speed (18-20 m/s). A bit much, but she’s ready to fly, although the usual competition would not carry out in this weather.
And now the sports Commissioner gives the command: “Start!” The model breaks down with the starting rod. The wind tends to overturn a rocket plane, but Myakinin, skillfully working the control stick on the transmitter, in time, takes the right team. The model is a powerful dynamic flow. See Valery sighed in relief. 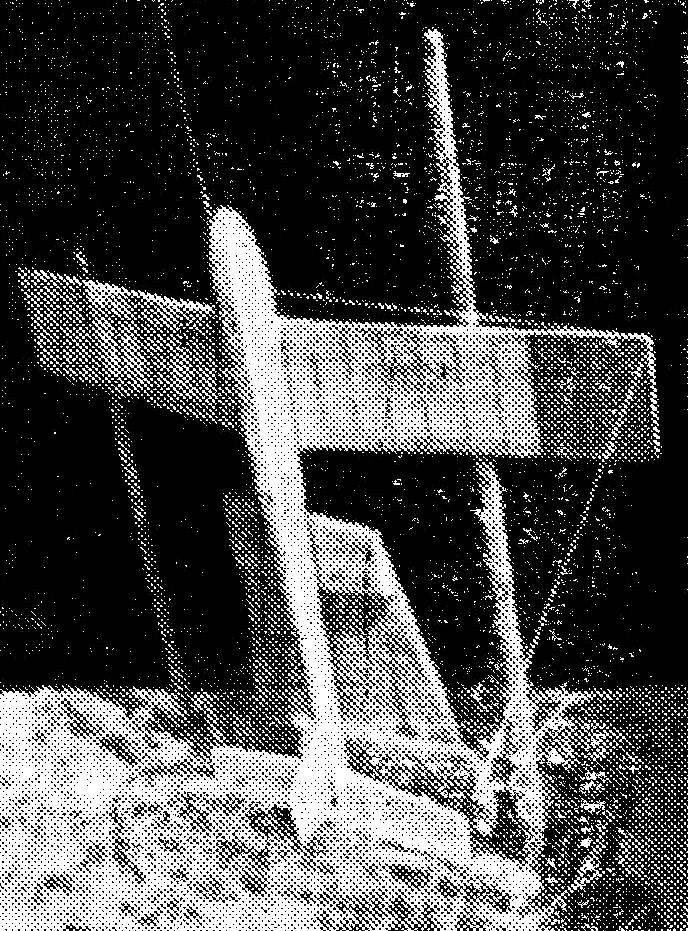 Talisman V. Myakinino at the start.
After an hour he asks him to wear sun visor, tired eyes… Soon the model went down and a few minutes later landed softly. The judges fixed the result is 1 h 33 min 17! Now the world-record holder Valery exceeded more than two times!
This day was the “star” for model aircraft. RC model airplane, Y. Zaslavsky and A. Smolentseva flew in a circle 731 km, exceeding the world record of American R. Weber 48 km.
A few days later the attack on the records was continued, now in the class of raketoplana S-4-F (weight to 500 g, and the pulse motors 40 to 80 n*s). And again success came to Valery — 1 h 39 min 19, flew his model.
All these outstanding results were recorded as the all-Union achievements, and the material on them were sent to the FAI for registration as world records.
For today Valery Myakinin, perhaps, the most titled athlete among the “radio operators”. He owns three world and six all-Union records.
Going home, carefully packaging “sports armor,” I asked him, “what next?”
— You know that among raketoplana only five classes, — he said. Two of them seem to have mastered. Want to take the rest. There are also model airplanes. So that there is enough…
In early February of this year again in the Crimea, “happy” Klementiev mountain, Valery exceeded the world record in the class of raketoplana S-4-C: 11 min 58 s — this is the result!
Now to me, this message is not surprising. Knows: Valery Myakinino real rekordsmenka character. So be it new victories, new records!
V. ROZHKOV, master of sports of the USSR