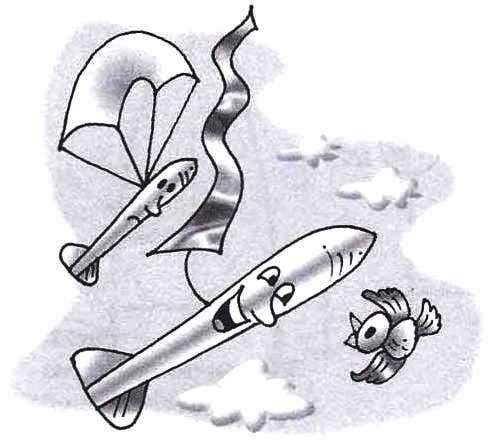 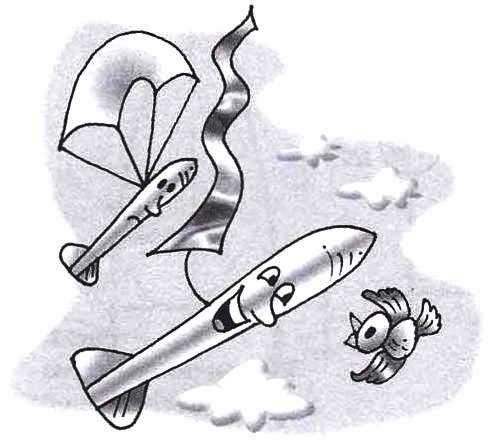 Model rockets category S6. Four class comprises a category S6 — model rockets for flight duration with the tape. In my opinion, this category is captivating spectators and athletes entertainment. After all, the entire flight takes place, that is, on sight. These models and the competition for them is the best suited for beginners “missile”.

Championship class in categories S6 and boys, and adults one — Ѕ6А. Technical requirements for sports “projectile” as follows: the engine (pulse — no more than 2.5 NS) — one, length — not less than 500 mm, case diameter — 40 mm, the starting weight should not exceed 100 g, the maximum recorded time round — 3 minutes (180 points). The main detail (the original recovery system), which provides the greatest flight time, — the brake band, which for competition is not limited.
They are made of homogeneous, non-perforated material with a length to width ratio of at least 10:1. In flight, the tape must fully unfold. The athlete may, depending on weather conditions to use any tape.
I must admit that since the “birth” of that category (S6) all design, technological developments are carried out mainly with the brake band. Here the direction of these searches: select the size and material, thickness and styling methods. Starting conditions dictate the participants and selection of the brake band. So, for wind we need “hard” tape, to calm — “soft”. The degree of “hardness” determines the thickness of the source material film. From the first it varies from 0.015 to 0.025 mm, the second is about 0.01 mm.
I must admit that the FAI code does not limit the number of bands for the competition.
Ways of styling the brake band — a great many, the most common — “accordion”. It resembles the bellows of the Russian musical instrument. Step (width of the pleat) from 5 to 25 mm. Many athletes after folding of the tape is subjected to the forming (heat treatment). Folded tape is clamped into the fixture and allowed to stand in this state at 55° — 60°C. This treatment is the brake band increases its stiffness, it holds the “harmonica”. The best athletes for each flight in the new round uses a different tape, allowing time for “rest” used.

Fig. 1. Model missiles Ѕ6В of the champion of Russia 2002, L. Tarasova (Moscow):
1—fairing; 2—connecting bushing; 3—bulkhead; 4—hinge; 5—the fastening thread of the brake band; 6—thread suspension frame; 7—brake band; 8 — body; 9—wad; 10—tail cone; 11—stabilizer; 12—end retainer MRD
A good confirmation of this are the brake band world Champions of 2006 among adults — the Polish athletes. Their sizes are: length — 1050 mm, width 97 mm, “accordion” — 4 — 5 mm, film thickness — 0.02 mm.
In the program of the world Championships starts model categories with tape (S6) was incorporated in 1978. It was the third world championship and the first to debut of Soviet athletes. The only medal — a bronze won then the author of these lines. Since then the winners, but not Champions was in the past years our athletes: Oleg Belous, Viktor Kuzmin, Yuri Firsov, Sergei Ilyin and Oleg Voronov. Held in 1997, the first world Careage — a kind of Olympics for aviation sports champion in the category (S6) was Nikolai Tsygankov.
Currently, the category model with the tape the most popular. It always involved the largest number of athletes. And this category is included in the program of all the stages of the world Cup.
Today the story is about models-Champions in the category (S6).
The proposed model missiles Ѕ6В (Fig. 1) developed by designer Alexander Tarasov (Yugorsk). This class of sports models with engines up to 5 NS for many years entitled “citizenship” at the Championships.
The hull is molded as a single unit on a single mandrel with the largest diameter of 39.9 mm. Thickness used fiberglass — 0.03 mm, the winding is in two layers. Before forming the annealed fiberglass and the mandrel is slightly warmed and smeared with mastic separation (“Edelvika”), In order to avoid air bubbles between layers when rolling still raw billet wrap tape tape width 10 — 12 mm and placed in a drying Cabinet with a temperature of 60 — 70°C.