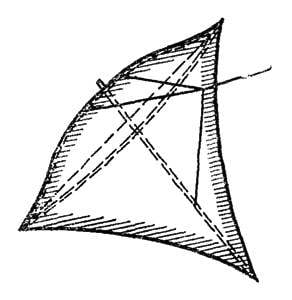 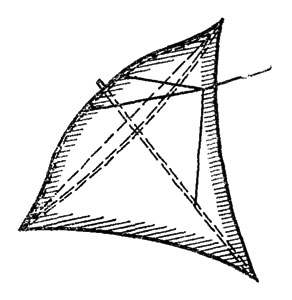 What a pleasure to start the thread right under the clouds even a simple crossing of two strips, covered with tissue paper! But in our time it is available only to inhabitants of rural areas… Try to catch a good steady wind at the site, surrounded on all four sides by a fence of high-rise homes! And try to bring a fragile product to the nearest Park in the crush of urban transport it is almost hopeless.
So, snakes — this old game boys of all ages (to be honest, and we, who were older, so tempted to ask the guys a reel with a flying serpent and a moment to remember his childhood) became exclusively rural brats?
It turns out, no. The proposed description original snake, made of modern materials. OI is very simple, is to a that allows you to put it in the pocket of the jacket, because of the small weight and the square is able to catch even the weakest wind. I advise you to do the same. And if the serpent flies well even in urban yard, on an open meadow, in the meadow he will be able to put the records of height.
Is pocket snakes. Taken cut good elastic steel wire of length 1.2 m and d, 1-1,2 mm (for example, from the eaves “String”; if after the sample of the curtains remained of her pieces, use them) and carefully straightened. Now it must bend in half (Fig. 2) and to clamp the workpiece in a vise, leaving free 350 mm in length from the bend. Insert the “eye” of the rod and slowly, with tension, screw down the wire (Fig. 3) several turns. Freeing the workpiece and wound to be safe, the edge irons is a thin copper vein or thread with glue, is bent free ends to the sides (Fig. 4).
If the serpent conceived rigid, leave the top of the frame like this. In the “pocket” variant, each of both consoles once wrap around the metal shaft of the mandrel. A kind of spring elements (Fig. 5) will allow you to fold the frame, which after release will again take the shape of the letter T. At the ends of the wire wrap a small loop (Fig. B). Not only do they protect hands from accidental cuts, but also will help you safely strengthen the skin. If you find that make the rings on an elastic wire is difficult to twist at first, the same “unit” as at the top, then the cutter will separate the unnecessary pieces and tighten the loop to the same plane. 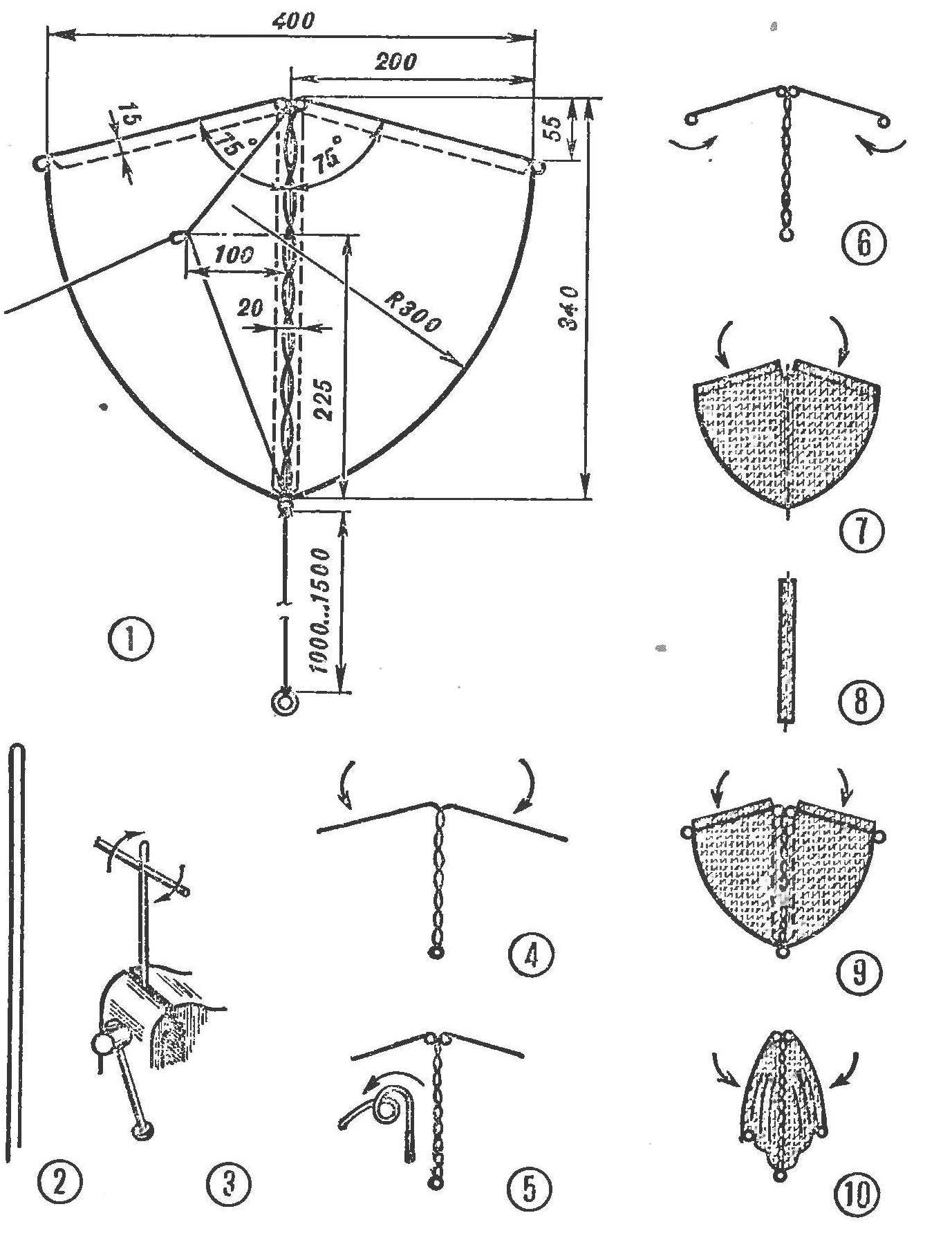 Each snake will go thin plastic film from any food package. Than the film thinner, the better — the snakes will be more easy. It will take approximately the form shown in figure 7. Cut another strip for securing the covering to the Central part of the frame (Fig. 8). Left to fit the frame of the film — and the snakes basically ready. Don’t forget to check symmetrically for chickpea wire — frame shoulders should be at equal angles to the Central twisting-rod. And stick the rolled edge trim and a strip of polyethylene can ka the glue “Moment” or “Unique”, as shown in figure 9. After
the glue snakes can be folded (Fig. 10).
Work on the serpent ends with the hanging of “bridle”. Correctly attach the thread will help figure the General form of ready-made “flyers” (Fig. 1). The “tail” will be the thread length 1-1,5 m, attached behind the rear lug of the frame and the carrier pas the end of a small nut or bead-sinker from the fishing gear. This “tail” in flight, absolutely not visible, though, and perfectly stabilizes the movement in the air. To start you will need a thin strong thread, preferably a thin nylon.
Proposed dimensions of the snake — not only to ensure a good flight. You can increase it (up to the diameter of the wire) to two and even three times and to the snakes of the usual size. Now try in your backyard or in a camp to hold the competition — whose snakes will climb to greater heights!