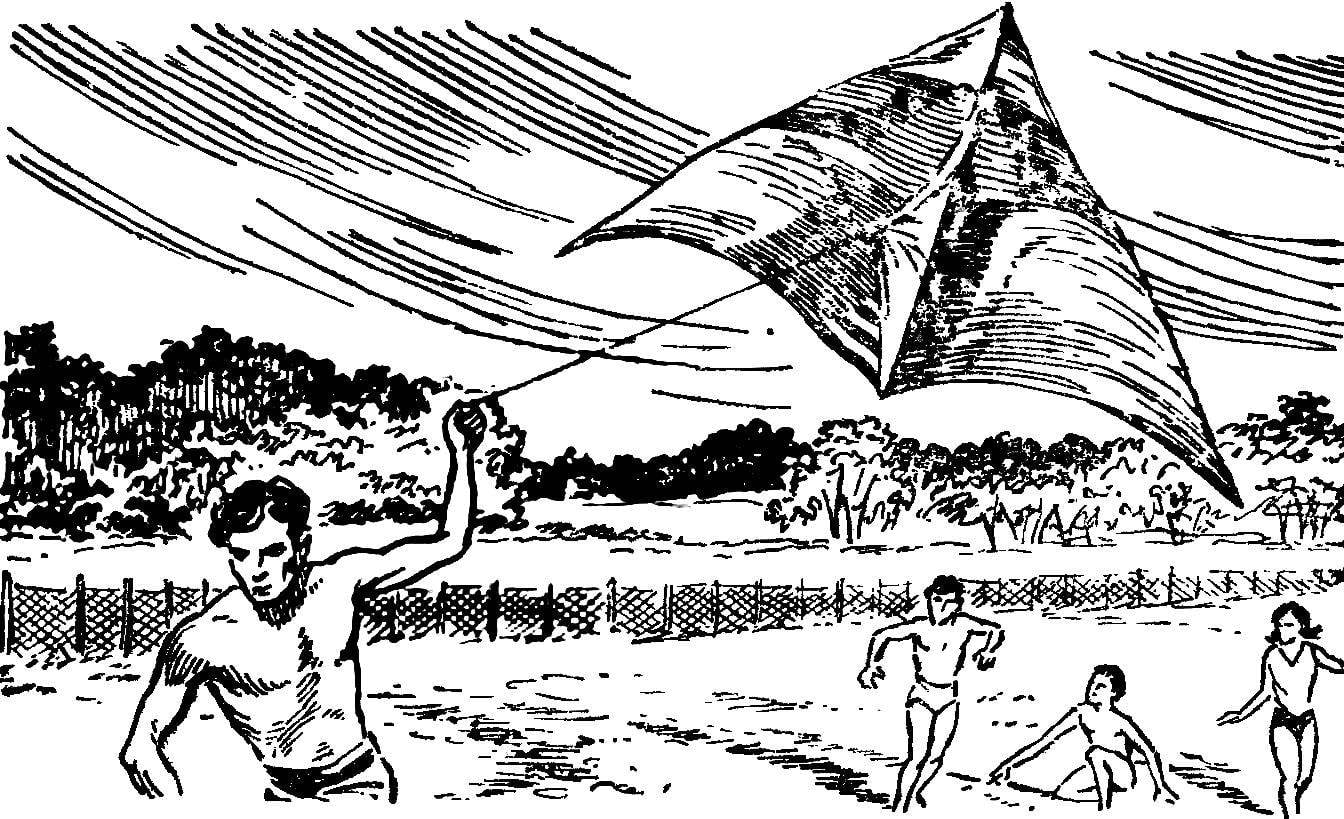 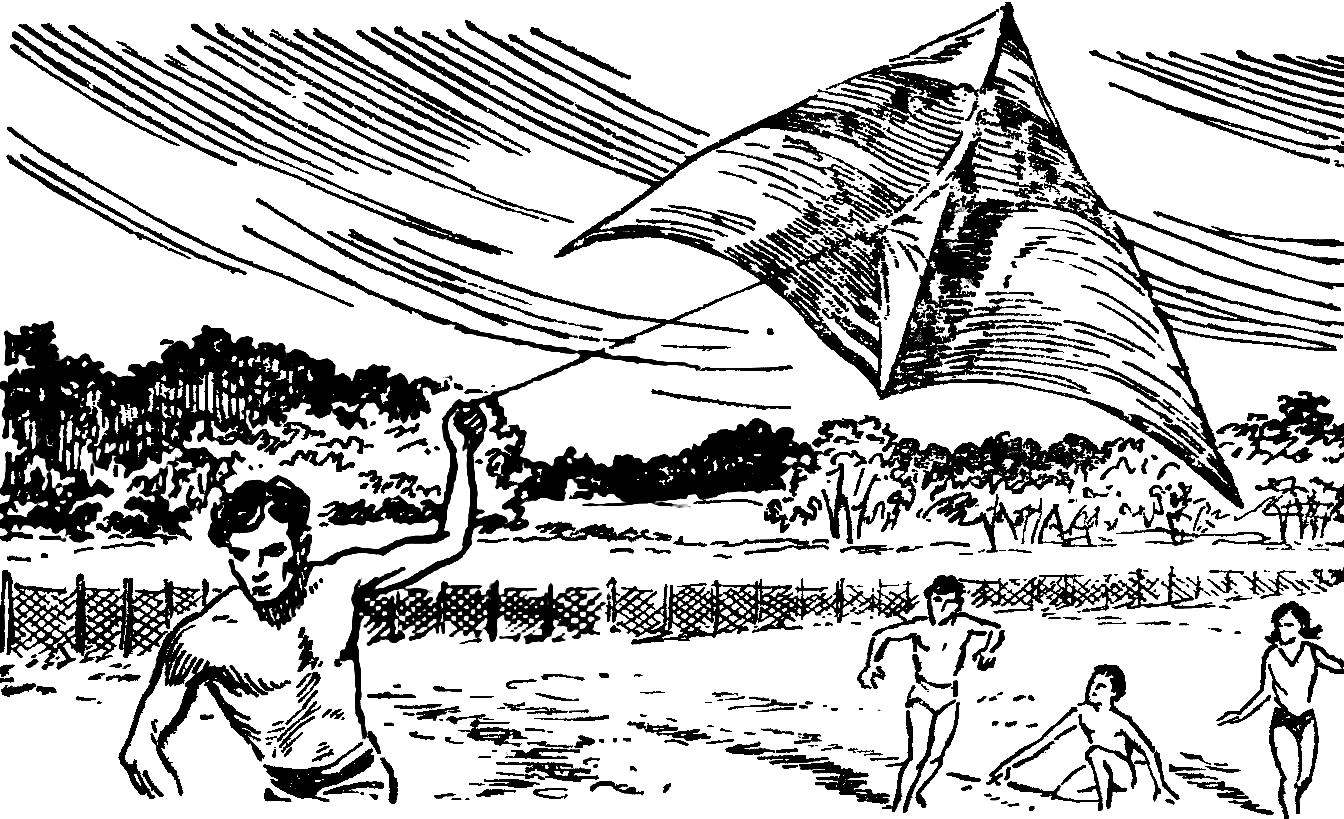 On the pages of popular French children’s magazine “Wife Anne” describes the two models of hang gliders, designed by Jean-Paul Movie and Christian Neuville. Wing Delta is an isosceles triangle with a height equal to half the base. The keel has the shape of a triangle with angles 90, 60 and 30°. Like most kites, wing “Delta” consists of a stitched frame and twine, wound on motoviltse. The cording is made of fine and durable matter, frame — wooden slats. The glider is very light, so to run it, a small gust of wind.
We are given descriptions of two models of different sizes with the same proportions. It should be noted that a large Delta flies better than small. So…
A small “Delta”
It need the following materials and tools: ruler, pencil, scissors, pins, thimble, strong thread, pliers, a nail with four rods Ø 8 mm length 100 for two, one 90 and one — 76 cm
Structurally snakes (Fig. 1) consists of two parts: the wing and keel are cut from a thin synthetic fabric; stitched’ll need a piece of fabric the size of 180×90 cm 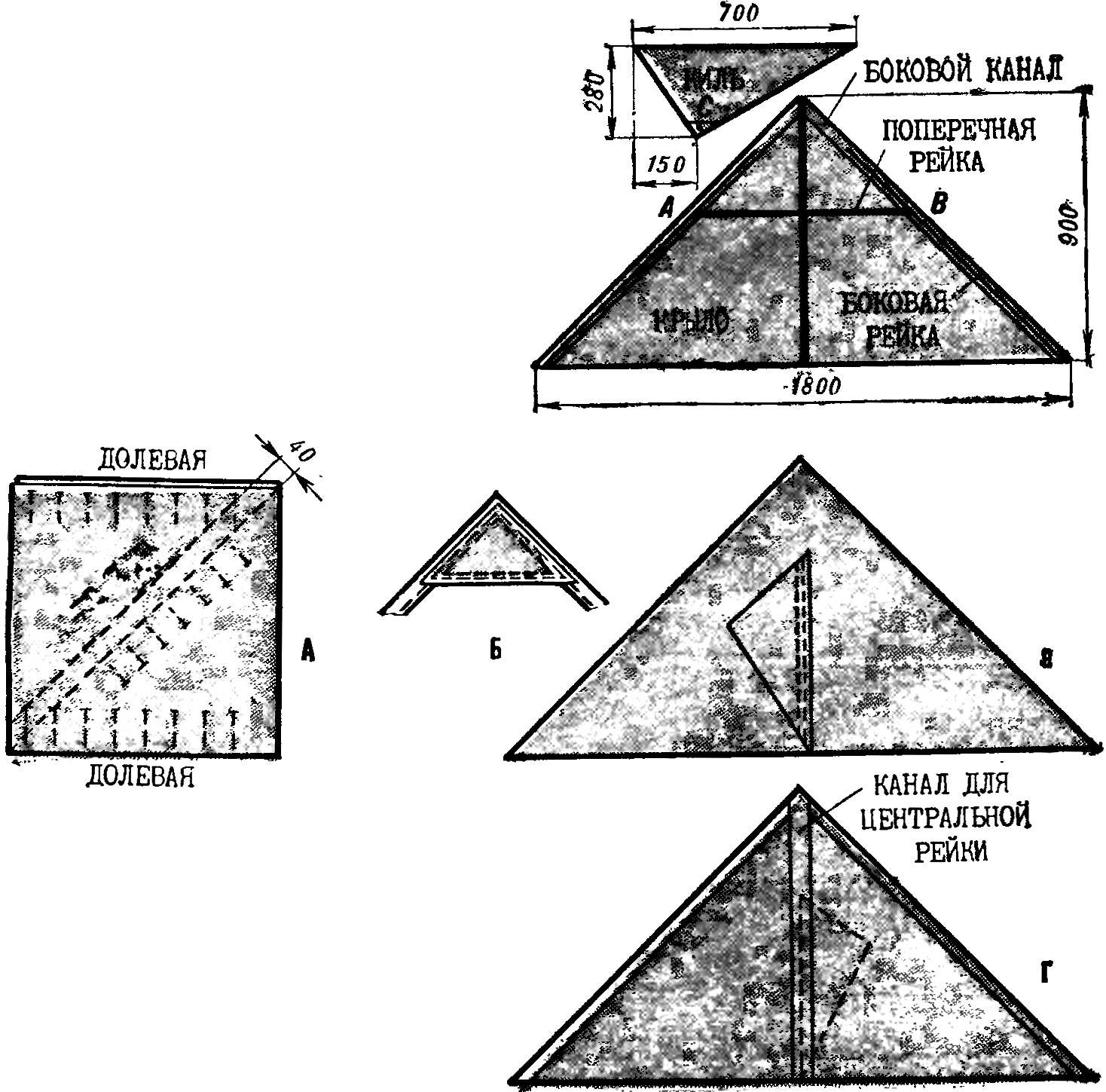 Fig. 1. A Small “Delta”.
Manufacturer
1. Matter, fold in half and secure with pins as shown in figure 1A. It forms a square with sides of 90 cm diagonal Swipe. Then, above her 4 cm (the seam) draw a parallel line that cut the fabric.
Expand it and in the resulting big triangle, find the middle. With two sides of the triangle matter, you need to bend 3 cm and stitch. From remainder of fabric vykroyte keel allowances: 2 cm for the seams of the two smaller sides of a triangle; fold the fabric over the two sides 1.5 cm
2. To the top right angle of the keel to strengthen sew a small triangle (Fig. 1B) of the same fabric will be attached to one end of the twine.
3. By the middle of the wing in its lower part (Fig. 1B) sew two lines keel: first, at a distance of 1-2 mm from the edge, and then retreating 2-3 mm from the first.
4. Vykroyte strip with a length of 92 cm and a width of 4.5 cm (on both sides of the fabric podymaetsja 1 cm) and sew to the underside of the wing exactly in the middle — from top to bottom (Fig. 1D), the width of the finished strap should be 2.5 cm For convenience, you can use the ribbon: it is easy to pristroit not podrachivaya edges. The strip forms a channel in which is inserted the Central rail. Sewing with stripes, try not to touch the keel. One end of the channel, sew, and leave the other open.
Assembly
1. Insert the slats with a length of 1 m in the side and rail of 90 cm in the Central channel of the wing. Side rails do not reach the vertices of the triangle wing. The ends of the channels, and sew.
2. Steel wire Ø 1,5 mm bend two hooks (Fig. 2). Glue and thread attach them to the ends of the cross rails (length 76 cm).

Fig. 2. Hook.
3. The heated nail to burn two holes in points A and b and the hole in the strengthened angle of the keel. Inserting the hooks into the point and secure the cross rail, it will give the “Delta” in flight bending, which is required to increase its stability.
Big Delta
You will need the following materials and tools: ruler, pencil, scissors, pins, thimble, strong thread, pliers, pliers, a nail with a vise, a hacksaw, two clamps, wood glue, sandpaper, four rods of square section of 15X15 mm: two strips with a length of 360 cm, one (transverse) 430 cm, the other (Central) 300 cm.
A large “Delta” (Fig. 1) do almost the same as a small.
Stitched need a piece of fabric 11,3×1 m-9 m — wing, 2.3 m keel. 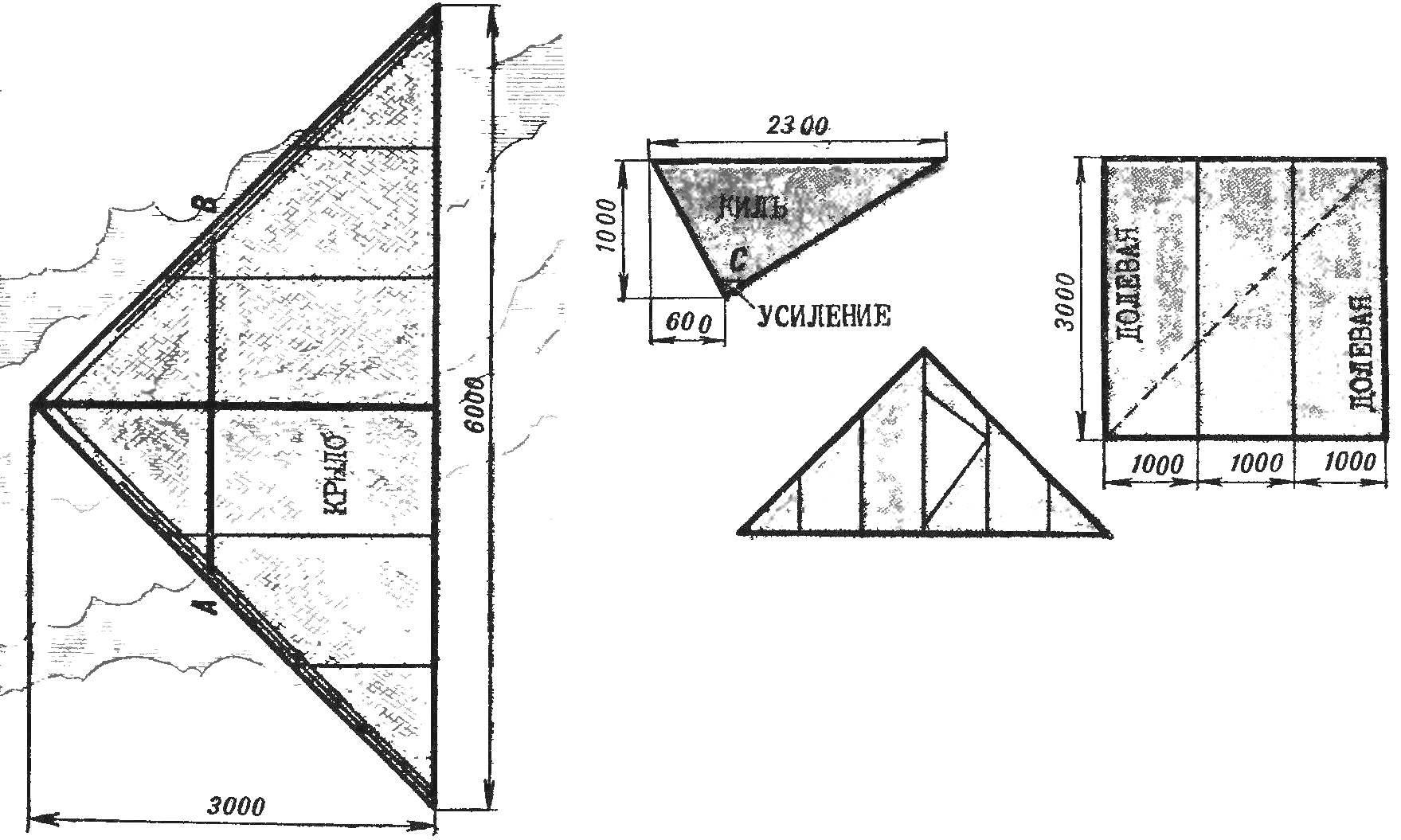 Fig. 1. A Large “Delta”.
Manufacturer
1. Vykroyte keel (see figure 1), leaving 2 cm at the seams with the two smaller sides of the triangle. Fold the end of the matter. To the top right angle of the keel sew to reinforce the triangle.
2. A piece of fabric 9 m long cut into three pieces perpendicular to the grain lines. Then fold them together so to form a square of side 3 m (Fig. 1). Swipe diagonal and it cut the tissue. Sew all the pieces so that the result is an isosceles triangle with base 6 m and height 3 m. both sides, tuck the material by 6 cm (for inserting the side rails), and from the base at 1 cm.
3. Right in the middle of the large triangle sew keel (Fig. 1), and on the other side of the cut strip with a width of 7 cm (it forms a Central channel for the Reiki).
Assembly
1. Insert side and center strips and sew the ends of the channels.
2. Hot nail to puncture holes at the points A and b wing and keel.
3. Of steel wire Ø 2 mm bend two hooks (Fig. 2). Attach them to the ends of the cross rail and insert it. 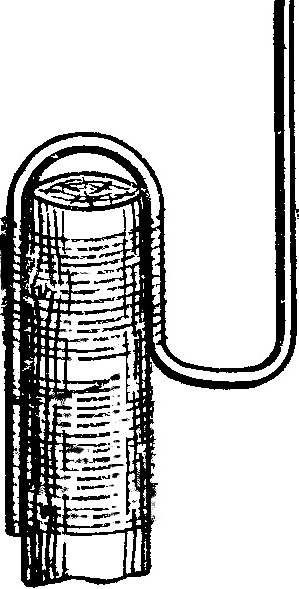 Fig. 2. Hook.
Motoviltse (Fig. 3) make from plywood 10 mm thick. the Size of his shown in the drawing. As the twine used nylon fishing line, a withstand load of 20 kg.

Fig. 3. Motoviltse.
To start the “Delta”, necessary to keep it in twine. To run the necessary help one or two people. In a strong wind the model can dive. To avoid this, increase the bend, lowering transverse bar (below the points and make two more holes).