You can understand the burning desire of the baby who saw for the first time the competition modelers, asking parents to buy or make him a miniature technique, not postponing it for later when he grows up and goes to a club.
Propose a simple dynamic model will be able to help parents in a similar situation, because it forces to make yourself out of scrap materials, very quickly and most importantly with your child. In such cases the boys could evolve into a love for a fascinating and accessible in this age, the technical creativity — modeling.

What is the model?
Modelers have this design on the principle of action can be assigned to variants, which are called snowmobiles because they are
movement due to the rotation of the propeller, pushing the model forward, or is addicted to her — depending on the design of the screw and direction of rotation: clockwise or counterclockwise.

The motor in this equipment is tightly wound rubber band, tending to spin back in and torque the propeller. And moves such model of wheel — slip on the skis; if you install it on the wheel — it will be the aeromobil.

So for the option we will need a wire with a diameter 2 — 3 mm (copper, aluminum). Bending each piece accordingly, to prepare the basis of design is the wire “shell” with sliding elements at the bottom and mount the rubber motor at the top (POS.1). The middle part of the design — the backbone — enhanced long knitting needle, which has one end bent at 90°. All this construction is going on the thread by spreading the glue.

For the motor any suitable elastic band (down to underwear) suitable length so that it formed between the fastening ring of the two threads. On the one hand clings to the rubber motor hook propeller shaft, and the other at the upper bend of the opposite ski. 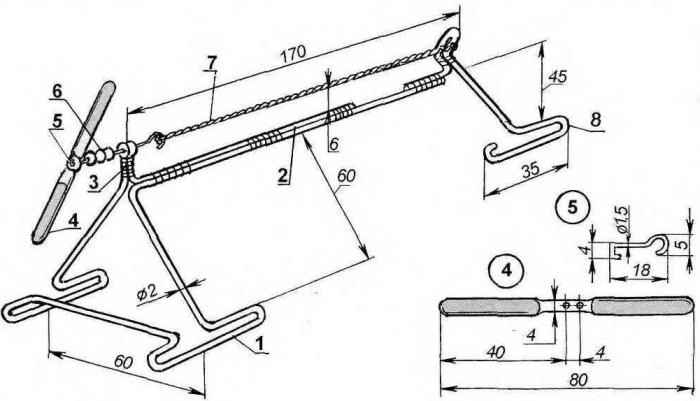 The propeller shaft may be bent from a thick paperclip or a suitable wire so that one end was formed a hook for the rubber motor, and the other wearing a bead (or several), playing the role of the bearing, and is formed by a U-shaped bend, which is part of the propeller.

The propeller is a strip of sheet metal (can be cut from a suitable lid or tin) in the center of which is punched two holes for the U-shaped end of the shaft, and the blades are slightly turned in opposite directions.

At the end of the production snowmobile to prepare for the launch, just tighten the rubber motor multiple rotation of the propeller in one direction, first a little bit to see if the screw to push the model forward or pull in the opposite direction to Determine the twist, bring the rubber motor to an extremely tight condition and produced start-up model.

Best of all, of course, the snowmobile will slide on pidu or dense snow. Well at home you can run them even on the carpet.

Choice on the wheels

In the beginning we mentioned that the model may be fixed to the wheels — then it will be an aircar. This option is the ski bends of the model to form simple bends that serve as axles. 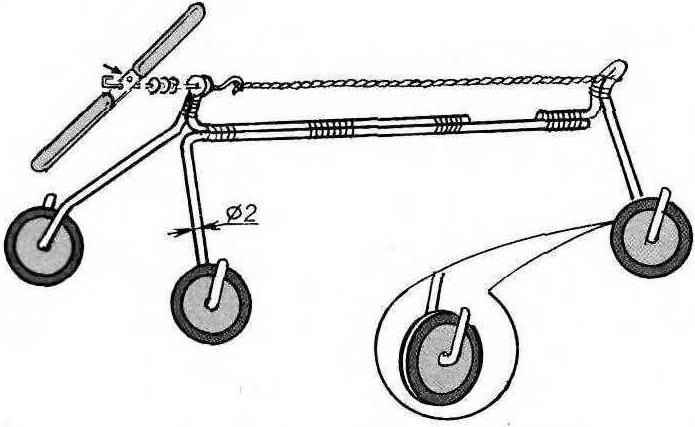 Wheels will fit any from children’s toys; their axes will serve as a correspondingly curved ends of the wire elements.

The aircar will be a good move on any floor or paved area or walkway.