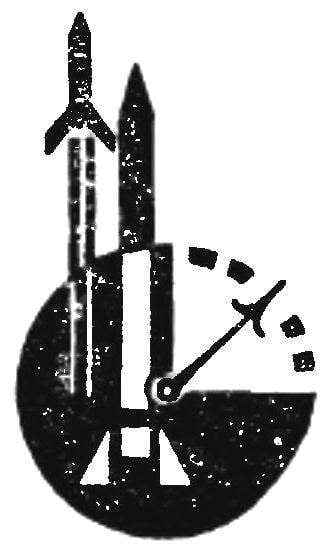 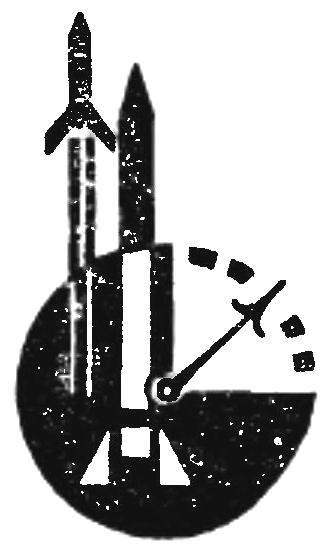 From January of 1976 in our country came into force new rules for rocketmodeler sport. The editors asked me to tell them the Chairman of the Committee on rocket modeling of the FAS of the USSR V. S. ROZHKOV.
GENERAL REQUIREMENTS FOR MODEL ROCKETS. The number of working steps is not more than three, the starting weight should not exceed 500 g, the total momentum of the engines is not more than 80 n·, the maximum weight of fuel to the engine — 125 g
For each model (except model kits) must be applied both alpha and numeric designations not less than 1 cm, consisting of the first letters of the name and surname of the athlete and serial number, and model class.
Any stage or separable part of the structure must have the device, slowing its descent to earth.
The step is part of the design of the model rocket engine (engines), having the device or the device for safe descent to the ground, that is the recovery system.
It is prohibited to produce metal fairings, housings, stabilizers, outer gun elements.
Individual championship in a specific class of models rockets played with the participation of more than three athletes. Each participant may declare in the same event in the two models.
As can be seen from the table on page 47, all classes are divided into two groups: starting on a height and on flight.
AT the HEIGHT of FLIGHT tested altitude of the model classes S-1, with load FAI S-2-models S-5.
About the single-stage models S-1, we are told in the “M-K” No. 2, 1976.
Model-copy should copy any real rocket or launch vehicle of a spacecraft. For the accuracy scale prototype and workmanship, for the so-called poster evaluation model may further receive 900 points.
FOR the duration of the FLIGHT competing single-stage models with a parachute (S-3); single-stage model with streamer — the so-called tape — (S-6); model raketoplana open (S-4) and container types.
Competition for the duration of the flight according to these rules is conducted in three rounds with a fixed time limit in each round. The winner is determined by most amounts of points (1 = 1 point). If several athletes after three rounds will take maximum points, additional rounds fixed flight time increases by one minute.
New classes of steel RC model and raketoplana-models to the accuracy of a missile prototype (i.e., the realism of the flight).
Consider the features of the competition in each class model rockets.
THE MODEL FOR DURATION OF FLIGHT WITH THE PARACHUTE (S-3). In this category there may be only a single-stage model with any number of parachutes. In flight from the model must not separate any parts, except the wadding and the parachute cover.
THE MODEL FOR THE DURATION OF THE FLIGHT WITH STREAMER (S-6). Allowed single-stage model with a single streamer. They should be strip of a homogeneous material (fabric, foil tape, etc.) without any add-ons. One end of the streamer in flight free, the other attached to the model. On one of the narrow sides can be fastened a hard strap section is not more than 2X2 mm. the Minimum size of the streamer 50X500 mm. a Further increase is in the ratio of 1:10.
MODEL RAKETOPLANA OPEN TYPE (S-4). Bearing surface (wing) is washed by the oncoming RAM air when starting and engine operation. Change of geometry of the wing. Models of this class should not use aerodynamic quality on the active leg of the flight.
ROCKET CONTAINER TYPE is a model, in which the supporting surface during flight in the active phase removed in a special container and not exposed to air flow. Before you begin planning the container should be dumped and have a device that slow down its descent to earth. With random drop and the dive rocket plane flight is not counted.
High ALTITUDE MODELS (S-1) and ALTITUDE WITH a LOAD FAI (S-2). The objective of the competition is to achieve the greatest altitude in two rounds. The winner is determined by the best flight. For ease of observation of the models, they should be painted in bright contrasting colours. The shipment of the FAI (solid cylinder, Ø 19,1 ± 0,1 mm of lead or its alloy, weighing not less than 28.3 g — ounce). He should not be separated from the model in flight or upon landing.
Flying these models are not counted for the following reasons:
— failed recovery system,
— avoid the ignition of subsequent stages,
— at altitude less than 50 m model has changed trajectory and flew horizontally
— separated the motor housing, which is not a degree.
MODELS COPIES. In this category are allowed to the competitions models that are copies of existing or of existing missiles, guided missiles, space vehicles and its carriers. Before the flight-models are bench evaluation, during which is checked the scale and quality workmanship. The participant must provide evidence of conformity of prototype models, reliable data on the size, the color of the original. the Minimum information includes: the length and diameter of the prototype and one photo. The source can be a printed publication (Books, magazines, etc.).
It is strictly forbidden to add to the model-copy or remove it from between the bench evaluation and flight anything, except for the engines and devices for the safe return. For this, the competitor will be disqualified. 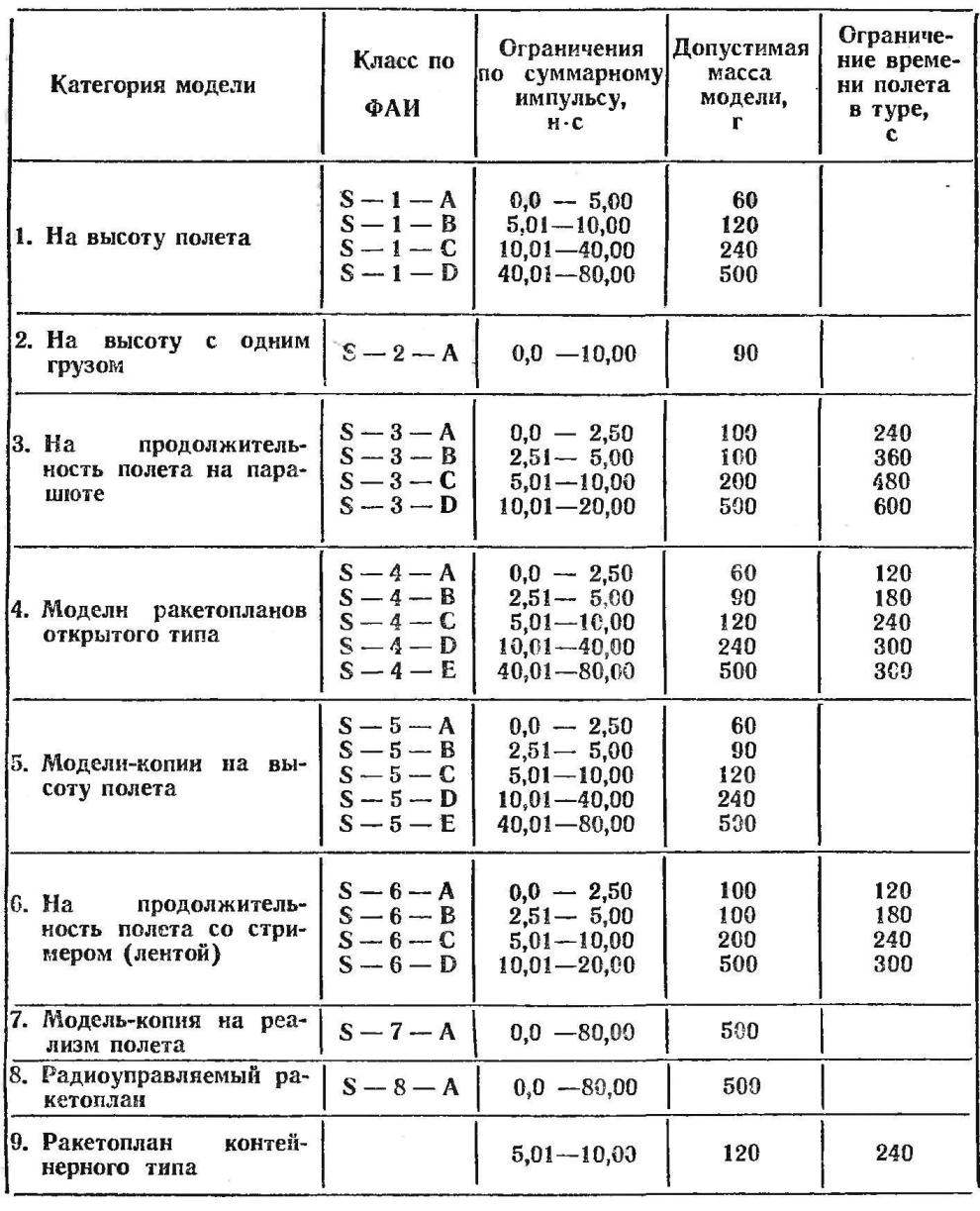 As mentioned above, the maximum in a bench rating you can get 900 points. It is conducted in the following manner:
a) evaluation of technical documentation — not more than 50 points. Taken into account not only the quantity of information but its quality and reliability.
b) precision (scale) of production — a maximum of 350 points (50 — the General form of 100 — case of 100 nose, 100 — the dimensions of the stabilizers or equivalent).
C) skill and workmanship — 300 points. Assessment of cleanliness, thoroughness and quality of finish;
d) degree of difficulty — maximum of 200 points. This takes into account the symmetrical case, the number of operating steps of the model, the complexity of colouring and symbols, detail of execution and the difficulty of adjusting to the flight. For example: model rocket spaceship “Soyuz” in the evaluation should have an advantage over model any meteorological rocket. Poster evaluation copies on high, and the realism of flying is the same.
-MODELS AT the height of the FLIGHT (S-5) for the flight characteristics I can get another 100 points. And the winner is determined by the largest sum of points for bench evaluation, flight characteristics and altitude (1 m = 1 point).
MODEL-COPIES ON THE REALISM OF THE FLIGHT (S-7). This is a brand new class in our missile and space modeling. The aim of the competition is an exact reproduction of a missile prototype: the start, the operation of stages, boosters, etc.
As we used to have in the country was carried out large events in such models, with the exception of the Moscow region, will explain how the evaluation of flying qualities in this class.
Start. When all the engines of the first stage — a maximum of 100 points; do not work all the engines of the first stage is not more than 50 points. 100 points can be awarded for the realism of the model launch. This takes into account soft start with acceleration in models of launch vehicles, spacecraft, satellites and automatic stations, and global strategic missiles; a start Surkov, Zuroff and interceptors.
Flight. The undocking steps should take place in the order and in the bridges as of the launch of the prototype (and this must be proved by documents). Sometimes you can see this picture: presents several models-copies of the same prototype, and the division of stages each performed by a different. For the separation of the first stage to a maximum of 150 points. For all engines of the second stage — 50 points. If not all the engines of the second stage — 10 points. The separation of the second stage and the flight with the engine of the third stage are estimated at 150 points.
Trouble-free when posadki. e. the Transition model for a parachute descent — not more than 50 points. This estimated smooth release of the parachute filling with air, the use of protective covers and parachutes The landing of the first stage — a maximum 100 points, second 75, third 50. The main criterion — the absence of failures and damages of the model. Landing separate lander spacecraft or the automatic station — a maximum of 75 points. Only ha flight quality you can get 900 points.
The winner is determined by the highest total points for poster assessment and flying qualities, according to the transcripts of the flight.
RC MODEL RAKETOPLANA (S-8). In this class of permitted models of any design. The competitions are aimed at achieving the greatest time planning with the execution of maneuvers. The participant is entitled to two official flight, in the active phase which the rocket must not use aerodynamic quality of the bearing surfaces.
Evaluation of the flight. Every second spent in flight is estimated at one point. Turn right or left 180°— 10 points. For each maneuver 20 points (the order of execution of the pieces chosen by the athlete). The fit of the model in a circle of radius 25 m — 10 points. Each 1 m from the edge of the circle to the center is estimated at 10 points. When planting outside the circle flight is cancelled, the participant will receive zero points.
The winner is the one who scored the most points in one of the two flights.