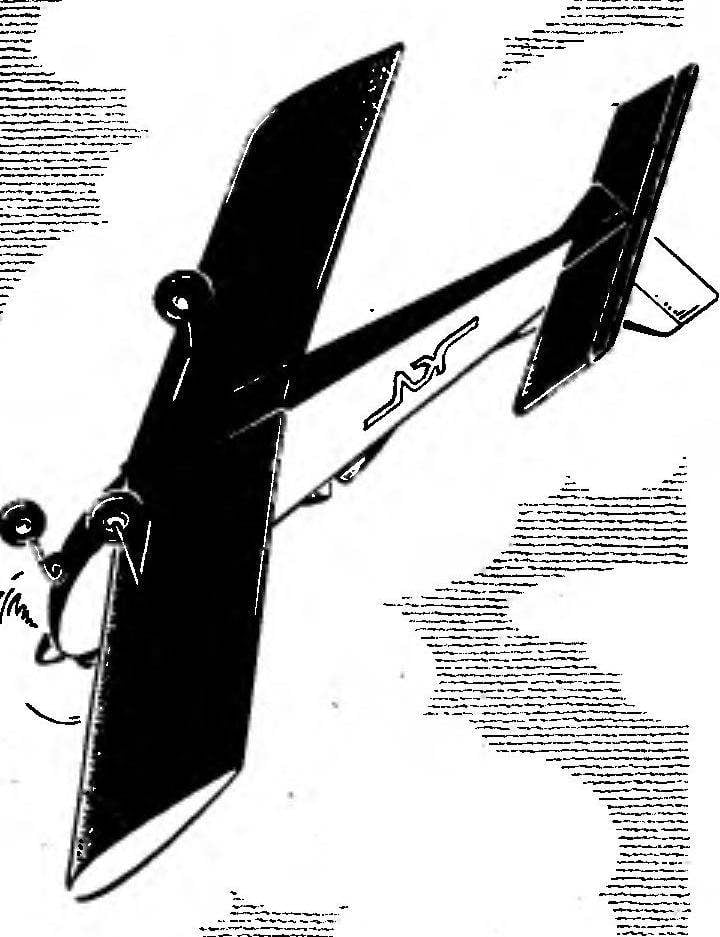 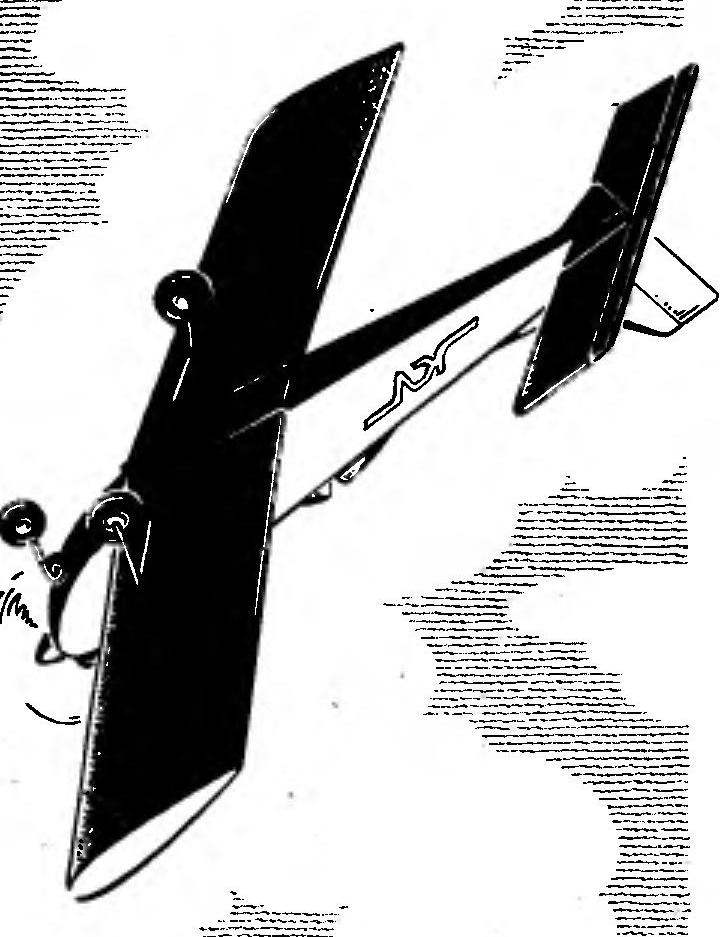 Only laudatory conclusions on flight characteristics received from everyone who was able to make her acquaintance, new polupoltina RC car. A great combination of handling and stability in all axes, a surprisingly low – speed flight, small sensitivity to sudden gusts of wind and good properties in the plan after stopping the engine and landing — here is the list of its advantages. The model is so poised in the air, despite diskoplana scheme, it can be recommended even for beginners in radiopilot to purchase both initial and follow-up skills in management. The latter makes this cruise a very versatile machine, especially considering its just amazing strength.
Successful development of “polyphyletic”, based solely on readily available domestic materials, and reproducible in any non-specialized conditions, and has an interesting history. The FACT THAT the basis for it was more than a famous “historical” model, first developed in America in the sixties and received after the release of the very popular packages-set the name to Square Shooter. Of course, original car meet, far from modern. However, it in ten years was inspired by Czech athletes at creating a more modern modifications, calculated no less to participate in the competition class RC M2. Our modelers this class a little familiar, so we mention that, in accordance with its requirements polyprotein model should not have ailerons. After reconstruction Square Shooter received a tricycle landing gear and, most importantly, new-fangled profiled wing (applied profile type E-474), largely contributing, along with proper design of the device successful development. Modified Square Shooter subsequently was based on published drawings in a variety of instances; almost all of them have fully lived up to their hopes athletes. Suffice it to say that in five competitions, including the M2 class, with models of this type in 1971, five times the line was busy the first place and once second.
Czech modification from a technological point of view is so simple that its construction modeller “mediocre” to cope over 15-20 evenings (of course, if you have already cut and polished sheets of balsa). Sure that this design will also attract our athletes (especially now that the balsa again becomes more available), so at least talk a little about its features.
The fuselage has a sidewall balsa 3 mm thick, reinforced at the binding area of the wing inner covers out of plywood with a thickness of 2 mm. Assembly of the fuselage is upside down on the plane of the upper generatrix. Only three of the existing bulkhead cut from the same plywood and glued into the front fuselage. The upper and lower fuselage is also balsa with thickness of 3 mm. Stringers and spars, the fuselage does not have. He still is extremely durable and tough with little weight. The only condition is the exact fitting of parts and use of quality adhesives for Assembly.
The tail is fully carved from baltovich plates 4 mm thick. the Front edge of the stabilizer is reinforced of pine lath cross-section of 4×4 mm and tips — balsa plates glued across the layers of the main part. The width of these plates is about 15 mm at a thickness of 4 mm. As a stabilizer, and fin are mounted in the fuselage in the prepared slits.
The wing, providing rigidity to twisting of the caisson has a spar made of balsa plate with a thickness of 5 mm, double-sided paneling of the forehead balsa 2 mm thick and double (team) the front edge of baltovich plates of thickness 3 and 7 mm. the Latter is attached only after the skin of the forehead with balsa that technologically simplifies the manufacture of the wing. Ribs carved from balsa wood with a thickness of 2 mm; the Central thickness is 10 mm. the trailing edge is formed by two plates of balsa wood with a thickness of 2 mm. Of the same material carried and shelves of ribs a width of about 8 mm. To the fuselage the wing is attached at the classic today option — beech pin and glued to the front edge and the Central rib and within a plywood frame and a nylon screw MB in the zone of the trailing edge. 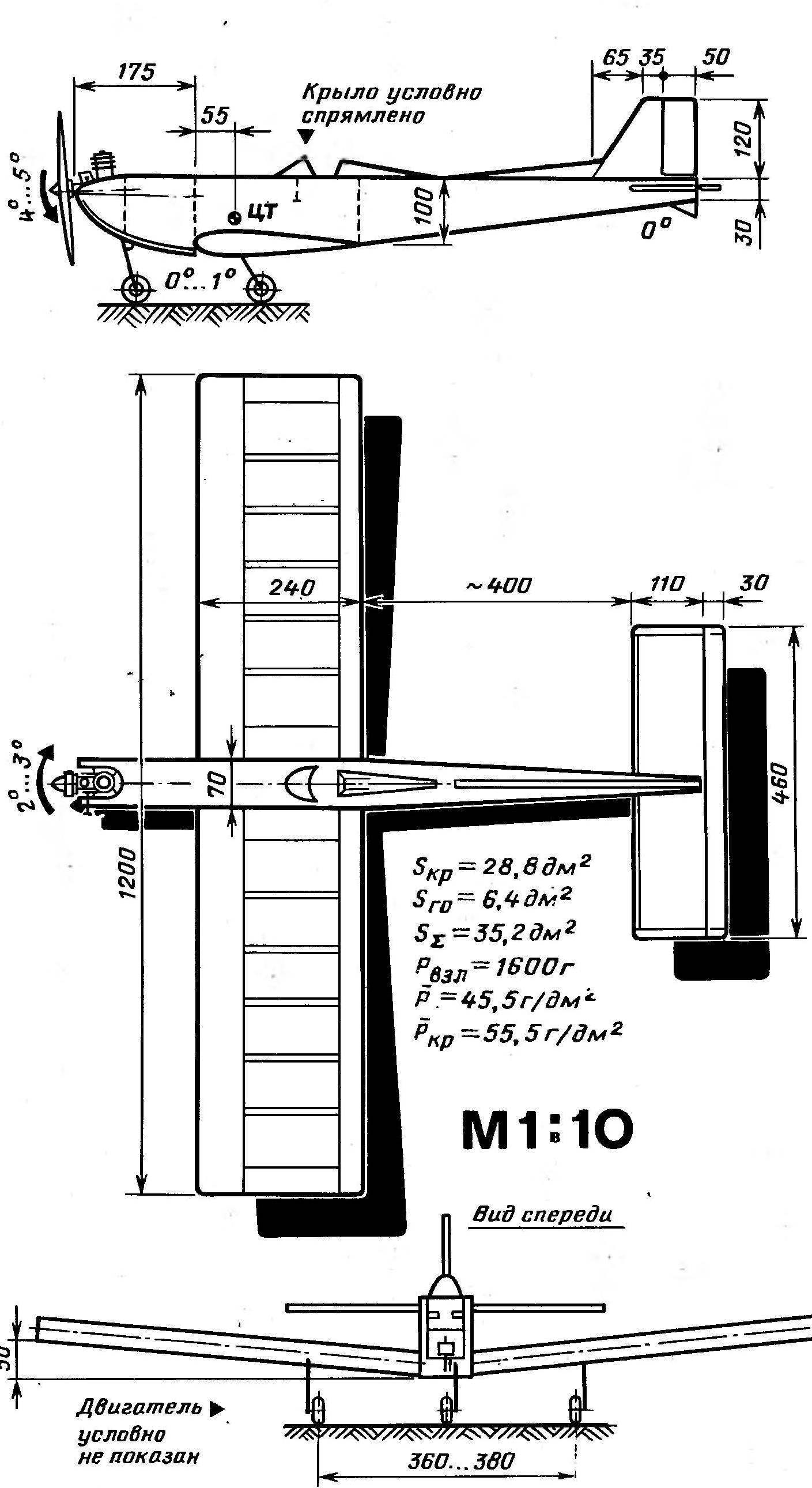 Fig. 1. The underlying model. Designed to fit glow motor a working volume of up to 3.5 cm3. The drawings and the description of the model prepared on the basis of the publication in the Czech magazine “Modelarz”.

Fig. 2. Wing profile base model.
Due to the high requirements for precision aging of the contour profile polulineinogo type pattern is reproduced in natural size. The main positive quality of the profile type E-474 is a minimum tendency to breakdown at high angles of attack, and good bearing properties in a wide range of flight regimes. 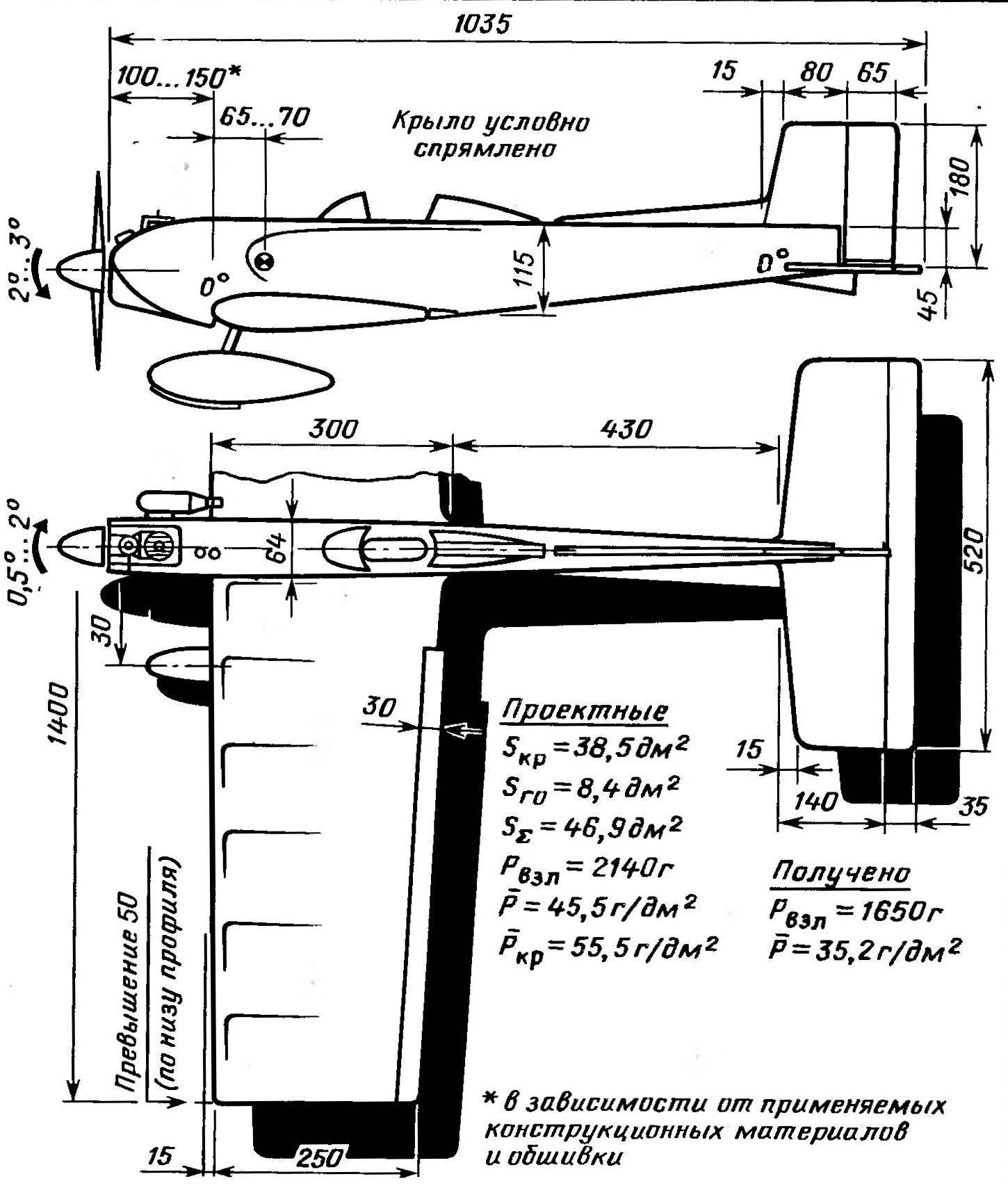 Fig.4. Domestic enhanced modification of the basic model, is designed for the mounting surface of the motor working volume up to 7 cm3. Under these received values of takeoff weight and specific load bearing surface provides the possibility of operating the motor in the soft “four-stroke” mode with appropriate selection of the propeller. 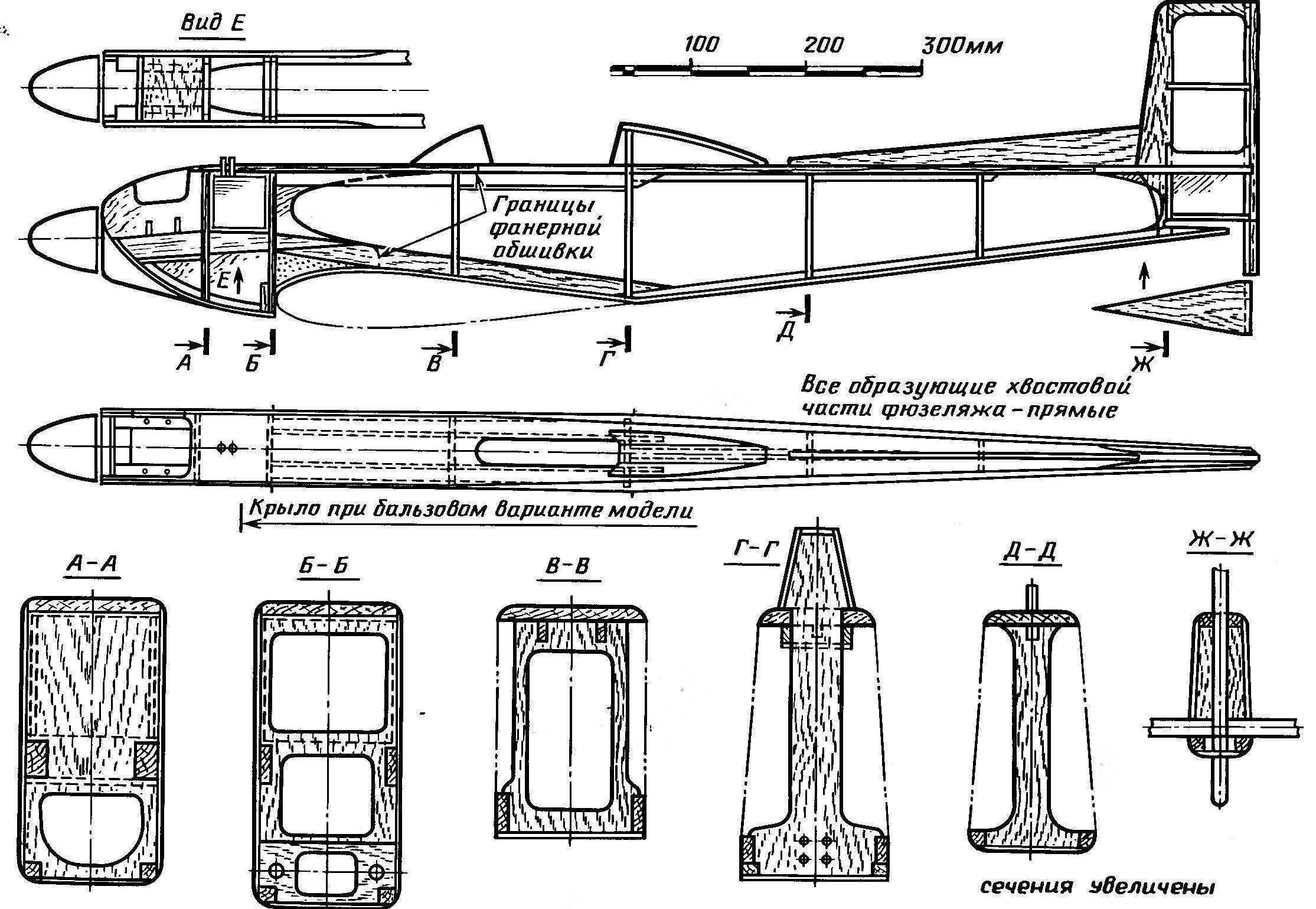 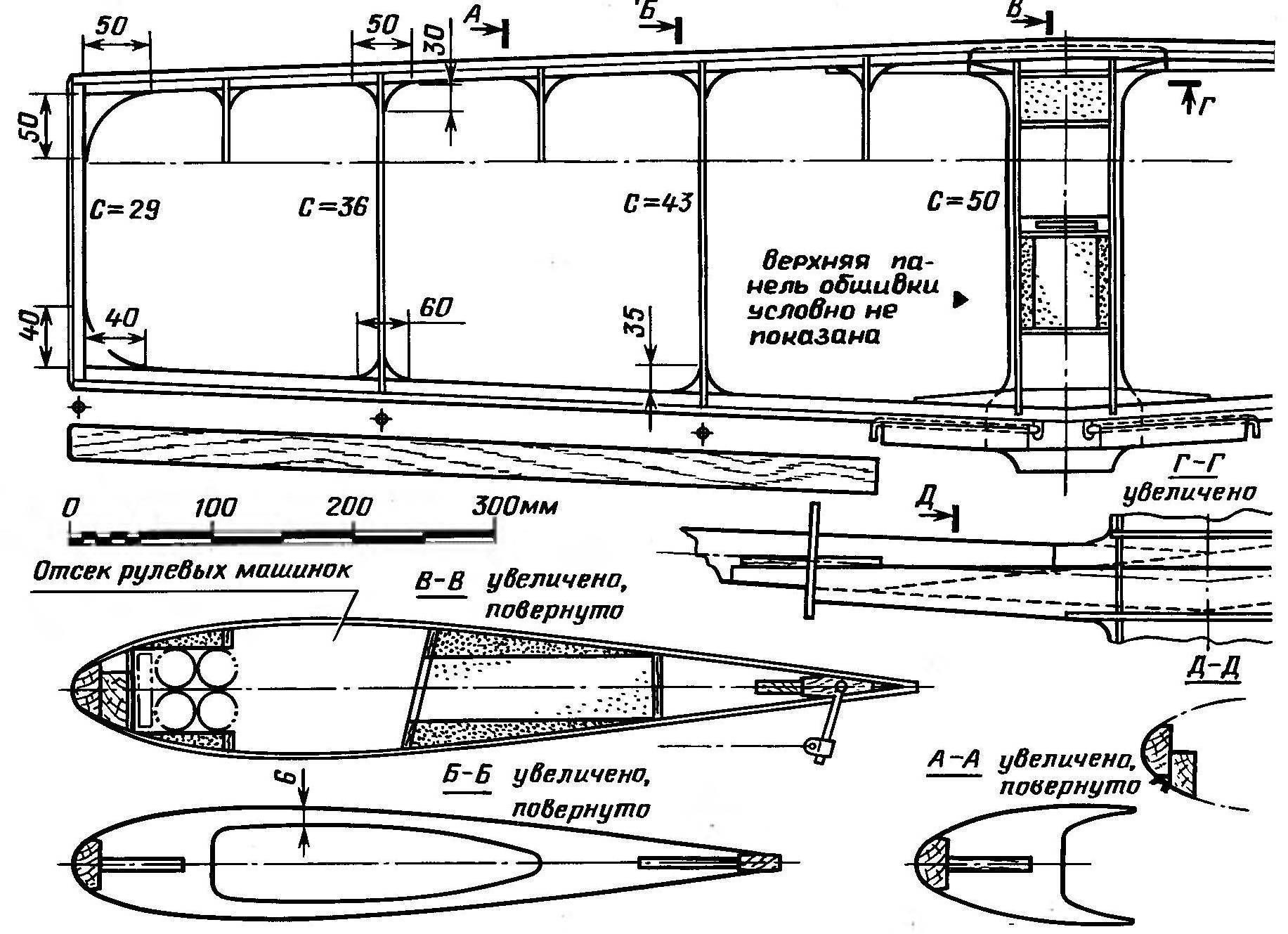 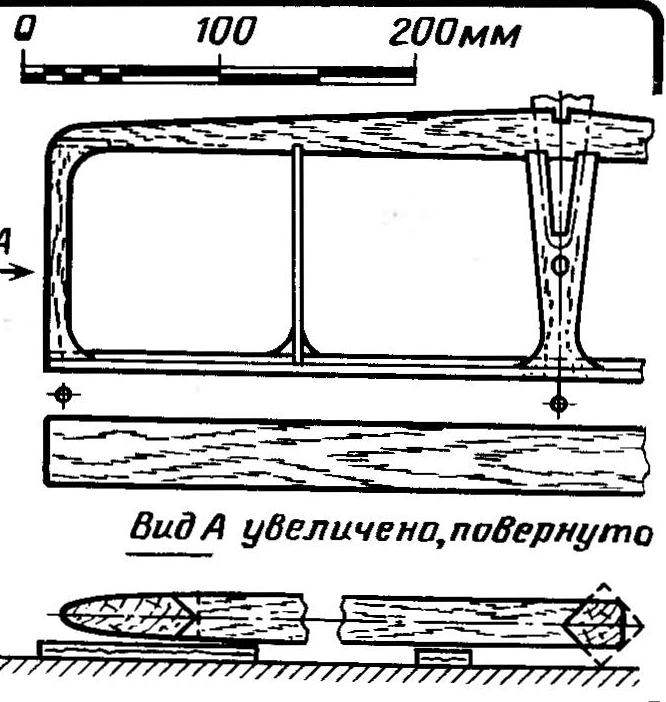 Fig. 6. Design of the horizontal tail. 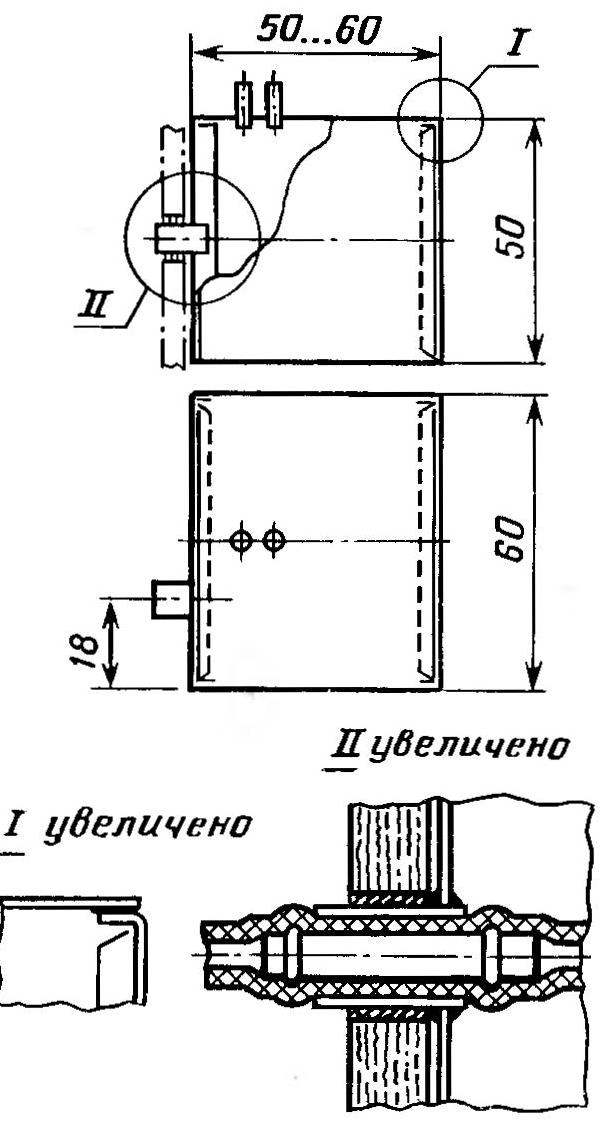 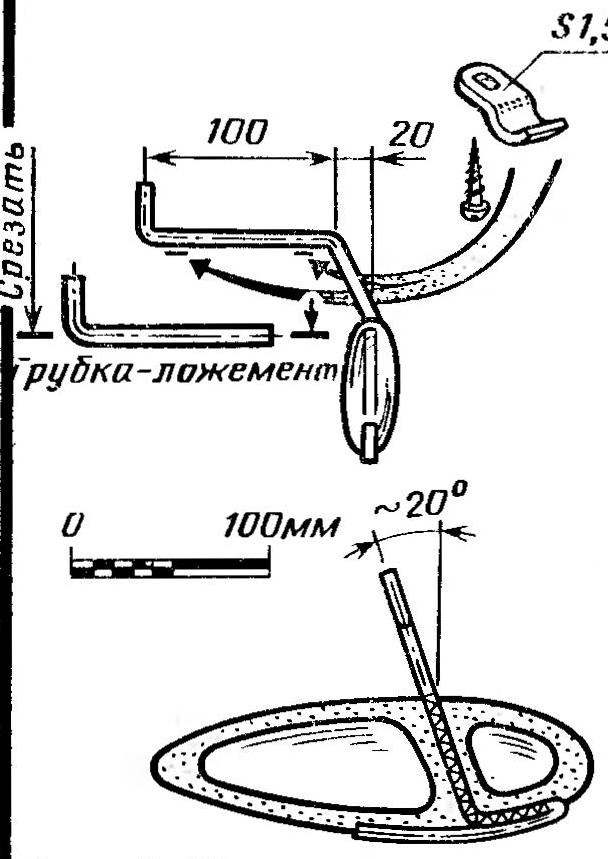