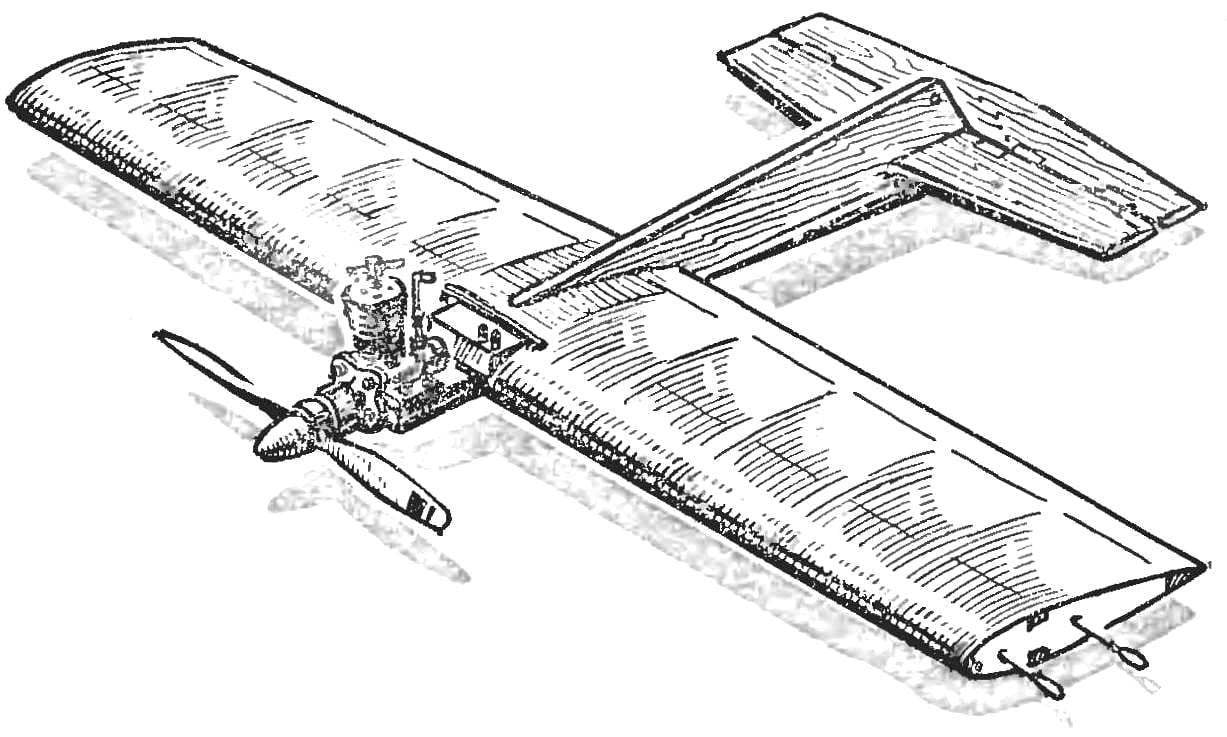 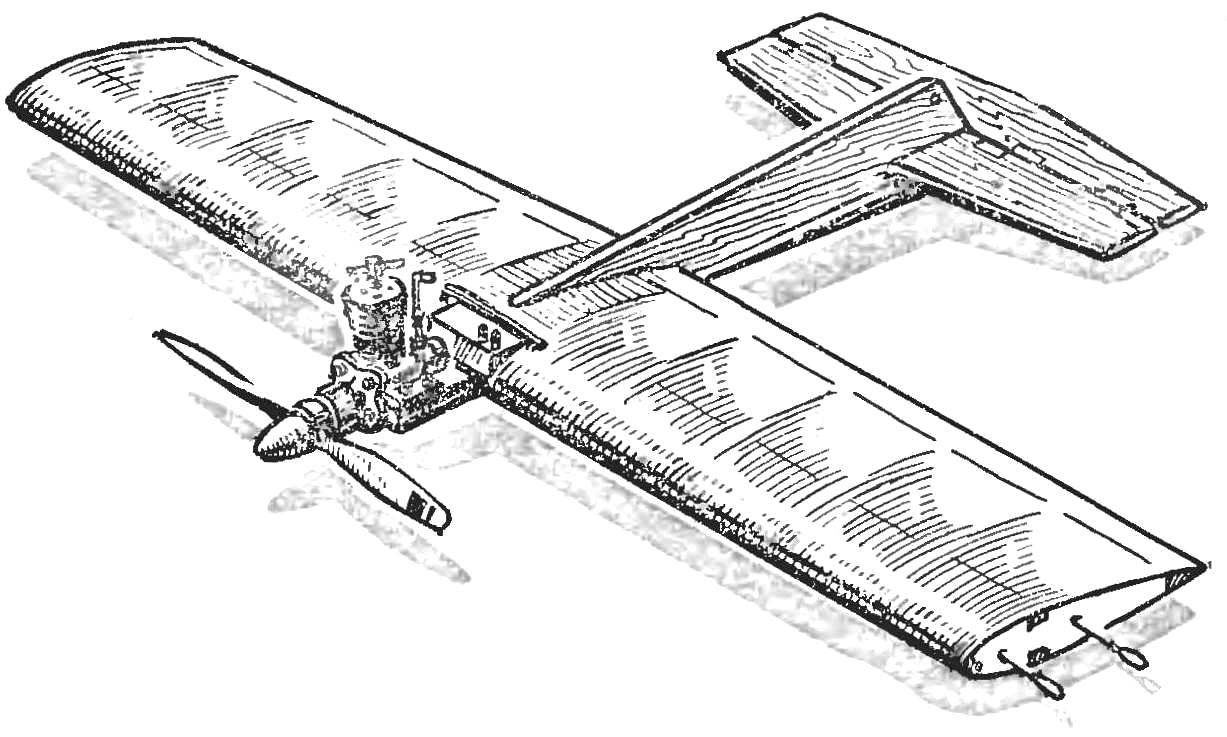 Kordovye aircraft models — the most popular among modelers. First among them is “air fighters”. And it is clear. The airfield may be a stadium, any forest or meadow flat area with a diameter of 40-50 m. One of the main requirements for such models, the simplicity of manufacture. Indeed, during the “air battle” inevitable collision and, consequently, breakdowns.
The proposed model is, in our view, meets this requirement. And the use of abundant materials and simple design allow to finish building in a relatively short period of time. In our experience, this is enough of a shift in the summer camp.
The wing consists of 10 ribs, two spars, the front and rear edges.
The ribs are made of fake veneers with thickness 1,5 mm. Made a template of the wing profile, put it on a plate of lime, in two places fixed studs or pins and cut out with a knife. In eight ribs make the cut for relief.
The spars are made of pine slats section 8X3 mm, the front edge of the slats 4X4 mm, and the back — plate of lime, in section it should be in the form of an elongated triangle, as it continues the contour of the ribs of the wing. 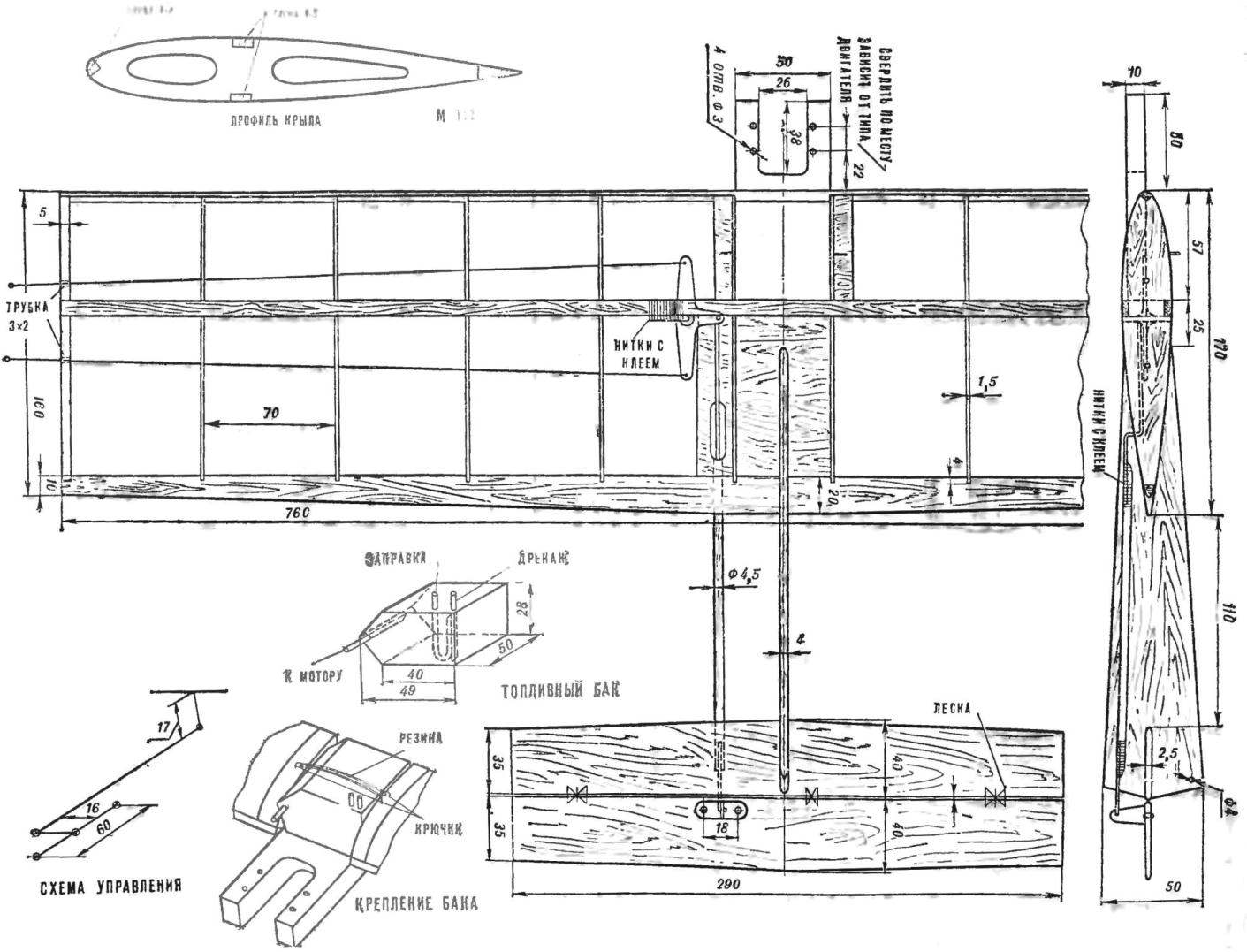 Before Assembly, mark on the drawing the side walls and edges, and in the back saw through the slots for the ribs saw blade blade for 4 mm. First at one spar mounted all the ribs (note that the two polegshennya put in the middle), then fasten the other side rail. Then thread is tied to the ribs of the front and back edges.
Make sure there are no distortions, lubricate all joints with glue. After drying the bone removed and adhered to the ending of purple plates with a thickness of 4-5 mm. to compensate For the weight of the cord the external part of the wing load — strengthen the ending 15-20 grams of lead.
The front of the Central section (between two polegshennya the ribs), glued mount out of plywood with a thickness of 10 mm. And the tail part of the spar to the trailing edge sheathe a thin fake veneer. In this place, glued the tail boom of lime, having in cross section the shape of an elongated ellipse.
The rocking control manufactured of duralumin with a thickness of 1,5 mm. the Axis of its— from wire OVS Ø 2,5 mm. Rod, connecting the bellcrank and the bracket of the Elevator, made of pine core with Ø 5 mm and the axes it is used for wire Ø 1,5 mm.

The stabilizer and Elevator are made from lime plate thickness of 2.5 mm, and on the ends to 1.5 mm. the Linkage bracket for Elevator control are made of tin with a thickness of 0.7 mm and attached by two rivets to the wheel.
The wing hang long-fibre paper and five times cover Amalita.
Fuel tank soldering of tinplate, with thickness of 0.2 mm and krepjat to Motorama rubber band pulled between two hooks from wire OVS Ø 1 mm.
Recommend engine CCCAM — 2,5 cm or MK-12 V. the weight of the model without engine is 190-200 g.