In the past year (“M-K” No. 5 of 1979), we introduced our readers to the technology of refinement of microelectromechanical DI-1-3 and EDR-40 to install them on a flying model. The article evoked a wide response among modelers. Yes, otherwise it could not be: after all, nowadays, no one not vysavac>1 doubt the prospects of application of electric motors not just for cord, but for radio controlled models free flight. However, even the best examples of electric motors are still unable to compete with internal combustion engines primarily by power density, its weight IS1 resident students nutrition.
For comparison here is a table with the main characteristics of today’s best designs. Today we will talk about methods and technologies to increase the capacity of the domestic microelectrophoresis DI-1-3 by doubling them, that is the making of one high-performance engine from the two of the same type. This path is particularly tempting if the construction of a single-engine flying model. And when you install two dual engines and the use of appropriate power sources (batteries STS-1,5) all up weight can be increased to 1.2—1.7 kg.
When doubling the engines D-1-3 you will need to fabricate a new anchor length increased (going from two anchors of a single motor with a coil of 100 turns of wire Ø 0.35 mm and improved collector). Will also have to make a longer housing and a new backing plate (back cover) with coal or copper-graphite brushes. To anchor you need to dial on the axis of a steel knitting needles Ø 2 mm and a length of 72 mm is the number of plates to a package with a length of 29 mm is located at a distance of 25 mm 01 front end of the shaft (Fig. 1). Records pre-promazyvaetsya a thin layer of glue BF-2. This not only gives the pack a high strength, but also prevents internal electrical losses in the mass of the armature. Assembly easier to carry on the mandrel with a length of 40-50 mm, machined from aluminum or solid wood, with a hole in the center, which will be held in the Assembly axis, the order of installation of the collector and the winding of the armature is not different from that described in the previous article.
For the manufacture of a new building will need two of the same body from microelectrophoresis DI-1-3. Of them removed the magnets, and the markup is as described in the previous article. This is very important because when you build a dual motor must be observed the polarity. From one of the existing buildings cut off the ring with a height of 15 mm (Fig. 2), and from the other, is 5 mm tall with legs that kept branded engine cover. Around the circumference of the remaining part (the same as the circumference of the ring height 15 mm) are removed with a file and chamfer at 45° to adhesions. Soldering should be performed on a round wooden mandrel, fitted to the inner diameter of housings (Ø 31,2 mm), it will provide a further alignment of the armature and magnets. After soldering the seam trimmed with a file (Fig. 3). In the bottom of the body drilled holes for cooling and then you can begin Assembly. First, it is necessary to insert and fasten in their places the magnets (Fig. 4). They are fixed in one opening of the springs, and in the other plastic tabs. However, you must remember that each pair peculiar to mutual repulsion from each other.
Manufacturer backing plate (rear cover) in accordance with the previous article. Upon its installation in case it is necessary to accurately determine the position in which the drain current (on the ammeter) will be minimum when rotated in one or the other side. Having determined this point, to fix the position of the lid two locking screws M2, spaced 180° around the circumference of the housing (Fig. 5).
DATA ABOUT MOTORS FOR INDOOR MODELS DEVELOPED BY THE AUTHOR ON THE BASIS OF COMMERCIALLY AVAILABLE

The engine made according to recommended technology, with a screw diameter of 230 mm and 115 mm step develops a thrust of about 120-140 g. the Optimal working voltage of 8-9 V, power consumption is not more than 4 A. In comparison with similar engines, a commercially available abroad, it looks as shown in the table, and the well-known internal combustion engine MK-17 (“Junior”) has the following data: the motor weight is 117 grams, the weight of fuel per 15 min flight 100-120 g, standard plastic screw 0 180 mm develops a thrust of 250-280 g, then as a dual motor, DI-1-3 and weighs 115 g and nutrition 200 g, Ø 230 mm screw gives traction 135-140 Despite somewhat lower indicators, dual microelectronical has a number of advantages — first of all, complete absence of vibration, affect the on-Board radio equipment.
In conclusion, it should be noted that the applied for revision, and engines D-1-3 are produced consumer goods for children’s toys. For national economy and special purposes our industry produces much better microelectronical.
Reworking them is of great interest, but requires a much more skilled approach, as these engines usually are manufactured to a high accuracy class. For alterations can only be used in motors having permanent magnets.
It should be borne on mind that you have to face multiple anchors with the winding of one section of 4 collector plates, etc.
Most promising for the flying of models should be considered microelectronical brand DP-35, 40, 45 and 50 with the remote voltage is 12 V.

If the expense of building a traditional models for thrust propellers it is possible to influence the fuel supply to the carburetor of an internal combustion engine, the elektroleta for this purpose necessary electroreceptor speed of the propeller.
How it works! This rheostat is connected with the steering machine, for example, from a set of radio equipment “Novapro”. In remaking such an Executive mechanism is not needed; the only thing needed is to drill (see diagram) two two-millimeter threaded holes for mounting the rheostat.
The homemade rheostat. The primary site I — coil: fiberglass frame with 60-75 turns of nichrome wire Ø 0,4 mm. the Exact number of turns is chosen in the process of adjustment of the rheostat. About that. how to do it below.
The frame is glued together from three pieces: two horseshoe-shaped plates and split ring. Plates cut from sheet glass, but with a third component is more complicated. It can be made from scrap plastic tube of appropriate diameter or baste 6-8 layers of tape IV fiberglass on a wooden disc and allow it to dry, and then cut the resulting ring.
Nichrome wire is wound on the frame with a small gap below the slider of the current collector does not knock on the coils. The ends of the winding soldered and tin the petals placed under the heads of the two screws M2, attracting the coil to a fiberglass Board. Moreover, between the charge and the coil should be a gap. It’s enough to put washers or screwed on the bolts at the nut, otherwise the winding will overheat and the fiberglass will start to smoke. Runner here — the finished part is taken from the variable resistance type SP-11.
The coil of the rheostat is connected to the housing of the steering machine of the dural area. All connections are done with a short two-millimeter screws.
In the center of the coil axis, the bolt M4, which is from the bottom up sequentially planted: as fast or as slow Bush (she ruskamen in the circuit Board), a collector, a slider, movable bushing, gear and nut. Last worn cover made of polystyrene, it keeps the axle in a vertical position. 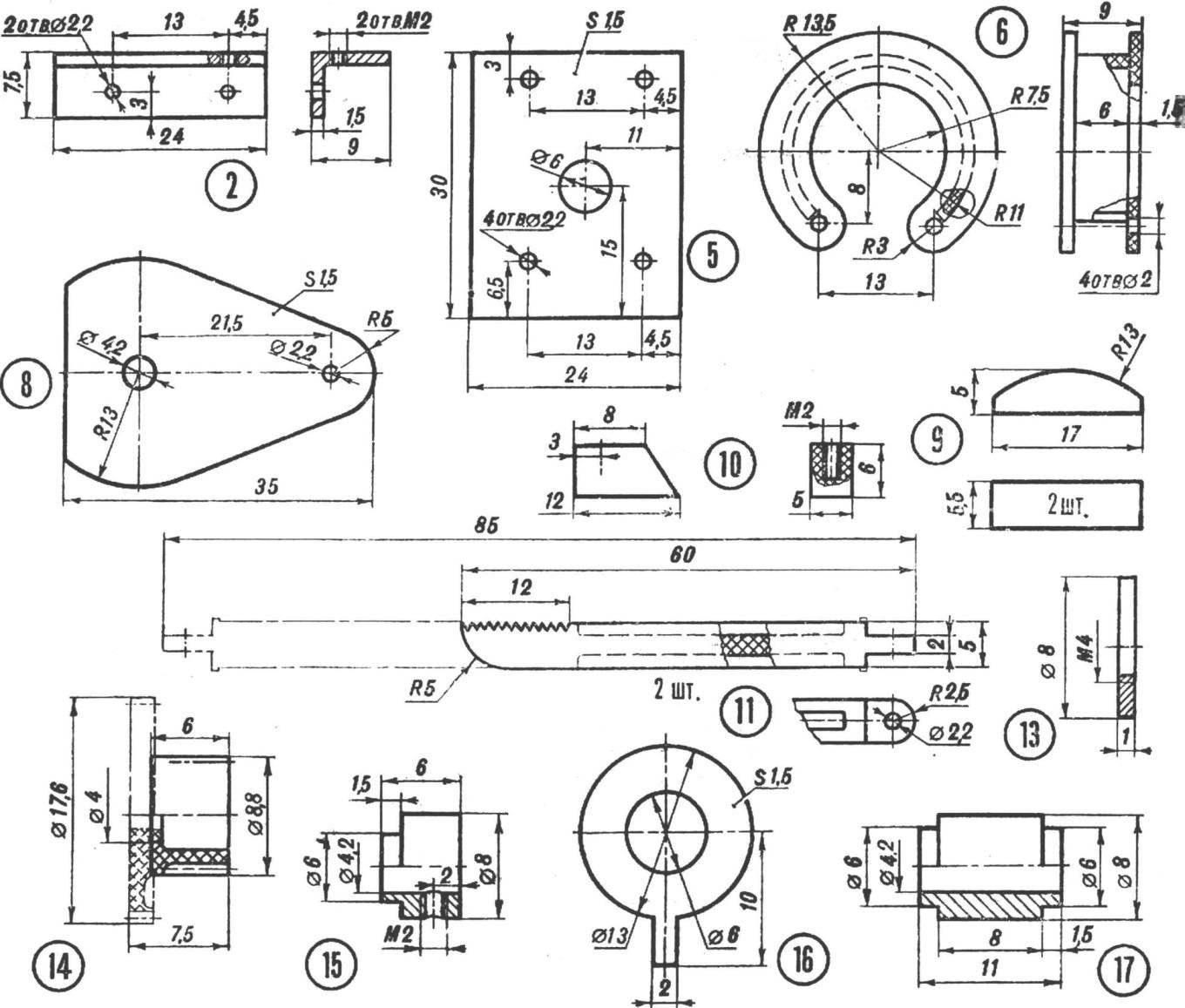 Speed control screw:
1 — steering machine, 2 — area, 3 — bolt, 4 — wire rheostat, 5 — tab, 6 — frame of the rheostat, 7 — runner of a current collector, 8 — cover, 9 — the guide. 10 — front cover, 11 — comb, 12 — wire feeding machines, 13 — nut 14 — gear, 15 — movable sleeve, 16 — collector, 17, the fixed sleeve.
Now more about those details. The fixed bushing is intended for mounting of the current collector. Fixed he flowed to his “language” was directed toward the slit in the housing of the rheostat. As the current collector made of foil fiberglass, the foil on the “language” of soldered wire, which, together with the two wires from the coil of the rheostat is the harness that feeds the motors. Strictly speaking, in the electric circuit except the power source, motors and controller is described must be present another element — the reverse switch, but the conversation about it will go in the future.
The current collector foil of one of the contacts slides the slider (the other contact on the coil]. A slider with a movable sleeve connected with core — raskere. Bushing on the axis of the fixed cylinder and screw. By the way, raising or lowering the movable sleeve, it is possible to regulate the force with which the slider is pressed against the winding of the rheostat.
Further gear. Moving to the Bush she pressed on top of the nut and serves to convert the reciprocating motion of the dies in a rotary movement of the runner of a current collector. The plastic gear has 16 teeth. She is carved out of a dual pinion steering from the faulty serial machines, its axial bore enlarged to Ø 4 mm. of Course, you can apply and other appropriate gear, including metal. Importantly, the step of the teeth matched the combs.
Combs used cars from the steering equipment “Suponer”. They are cropped and pinned to the gear rails made of polystyrene that are glued to the cover. She, in turn, screwed to the rack attached to the body of the steering machine.
A few words about the adjustment of the unit. Assembled the regulator must provide the following voltages: 9V, when the slider of the current collector is in the beginning of the rheostat coil, that strain of the forced mode of the engine (takeoff elektroleta, climb, turn), 6V — runner in the middle of the coil (steady flight) and 3B — at the end of the coil (pick up and “small gas”). Selecting the number of turns, it is necessary to achieve such voltage values. Then the corresponding thrust propellers will inform the elektroleta speed required for these modes popeta.
Power motors from a separate battery STS is 1.5. Steering the machine of the speed controller powered by a battery tsnk-0,45 — source receiver power supply and all equipment. It is located in the fuselage, among other radio control device.
S. PODGURSKY