To rocketmodeler it is no secret that the easiest way to measure the height of the flight model triangulation method. It is based on the measurement of the angles between line of sight and reference planes. Is the choice of the reference planes and the measured angles is largely determined by the degree of difficulty of the subsequent trigonometric calculations of the height.
If to measure height use command pipe bfis for accurate calculation of the height is necessary to resort to cumbersome trigonometric calculations. Therefore, the competition is usually used a simplified calculation using geometric constructions on the tablet (Fig. 1). Tablet lay angles measured from two points a protractor, placed on the same line with the start and equal distances from it. These tools allow you to measure the angles between the line of sight and the plane of the earth, therefore, the deviation of the model from a vertical plane passing through the inclinometer and the start point obtained in tablet height is always less than true. Work on the FSS requires operator skill and dexterity. The fact that the optical tube has a small angle of view, so when rates rise model are difficult to keep in the crosshairs. In addition, refueling is quite expensive and rare device. That’s why when the competition is better to use protractors made on their own. This was confirmed at competitions in Moscow region, for last year’s championship of the RSFSR and the last all-Union competitions. 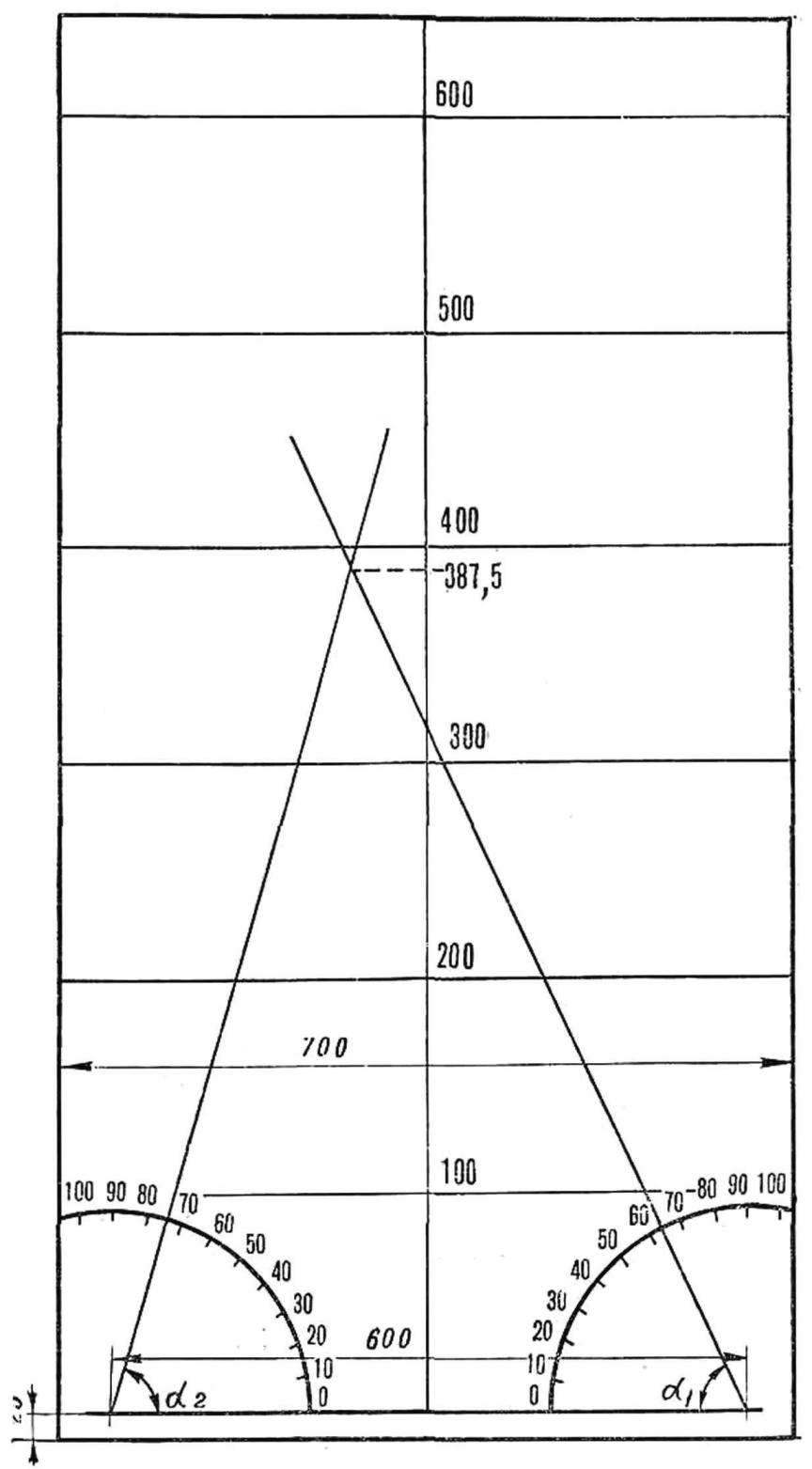 Fig. 2. Protractor gun:
1 — rib; 2 — handle; 3 —a; 4 — arrow-plumb.
The simplest design of a goniometer of the gun shown in figure 2 and includes a sighting bar with the pen, protractor and arrow-plumb. When measuring the angle of the rib sight on the model. The arrow-the plumb Bob indicates on the protractor the angle between the line of sight and the surface of the earth. Commit in the time frame provide, clutching the arrow with his free hand-the plumb Bob to the protractor. These protractors are easy to manufacture and can be used for milagiriya and city competitions, as well as in the training and experimental runs of the models.
Accurately measure altitude using protractors with tripods, as shown in figure 3. Their design was developed in CUT “Youth” of the city of Zagorsk, Moscow region. The main detail here is the swinging pad of sight, which rotates the aiming strap. The angle of inclination to the plane of the earth measured on the vertical protractor, and the angle of deflection of the sighting line from the vertical plane passing through protractors — protractors on the site. 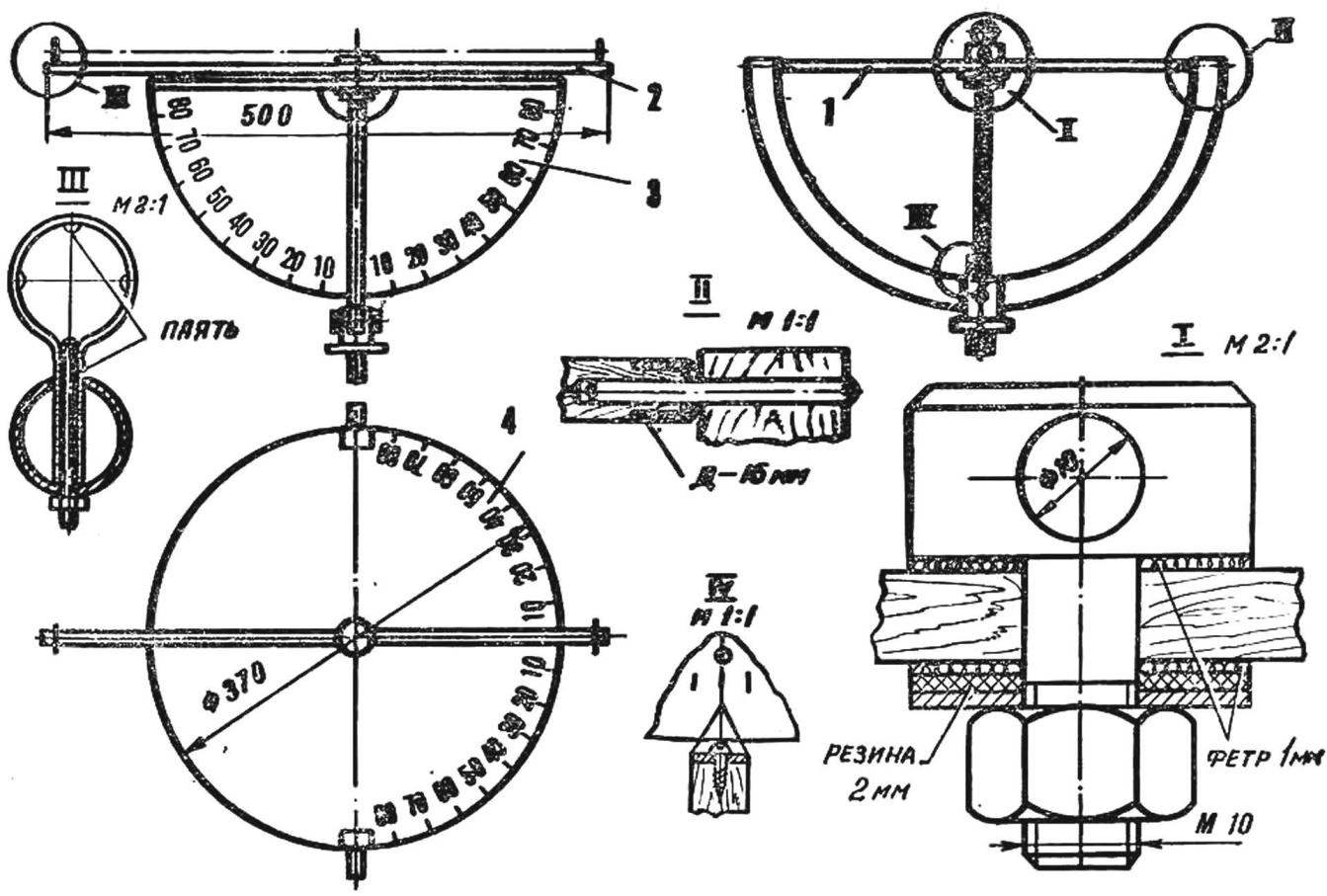 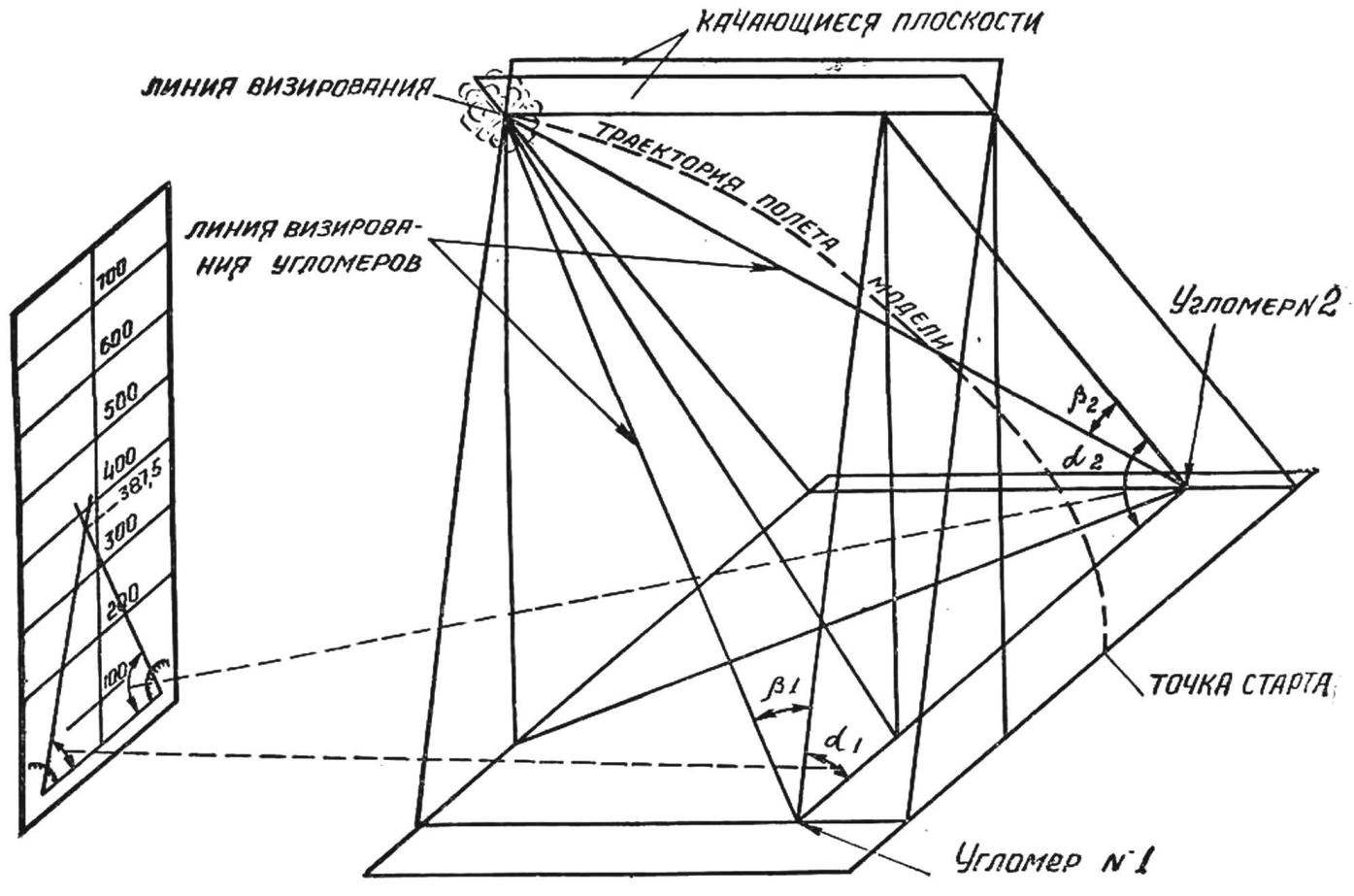 Fig. 4. The scheme of measurement altitude model rockets.
This design allows the protractor by simple geometric constructions on the tablet to calculate the true height value, even if the point of sight is not in the plane passing through the protractor. It is only important to properly install the tools (the position of the start point relative to the protractors is not critical). The theodolites are placed at a distance of 150-300 m, so that the axis of the swinging platforms of sight are parallel, and the plane of sight with zero readings on the vertical carrier remains parallel to the ground. Diagram of the height measurement using the inclinometer shown in figure 4. To determine the height used only vertical transportation. Auxiliary angles are measured in a swinging plane, serve to control. If the vertices of two triangles, built on the testimony of vertical and swinging doors, lie on the same vertical tablet, install protractor and the measurement was made correctly. The design of the tablet is made foldable, it consists of two leaves connected by a hinge.
V. IVANOV, engineer