Many models of passenger cars produced by well-known manufacturers, equipped with illumination. Usually installed inside a miniature incandescent bulbs or LEDs yellow glow. The energy they receive through a special flexible current collectors which are in contact with metal wheelsets, moving from isolated from each other the rails (about the same as on the models of locomotives).
Naturally, the change in voltage, the deceleration or acceleration micropaedia inevitably affect the brightness of the backlight in the cars. And when the train is stationary, that is, with the disappearance of voltage in the rails, the lights in the cars go off at all.
This picture is far from natural. To rectify the situation can be a small improvement, which is applicable on industrial production and construction in the home workshop. This requires three Nickel-cadmium battery D-0,1; several suitable sized LEDs yellow glow of any production; relay РЭС55А (passport RS 4.569.602) or similar; a capacitor with a capacitance of 1,000 µf (or greater); the diodes of any type; different resistance with the micro switch.
Consider the circuit operation in the presence of voltage in the rails. Between terminals A and B voltage may vary in magnitude and sign, the current is supplied from the current collectors with the wheels of the model. Micro switch SA1 turns off all the lighting system. The diode bridge VD1—VD4 provides a constant in sign to the voltage supplied to the led illumination HL1— HL5. Capacitor C1 smoothes the blinking LEDs with an unstable ground situation. At the same time connected to the relay coil K1, its contact K1.1 is open and the led HL6 and HL7 feed from the battery GB1, do not burn. 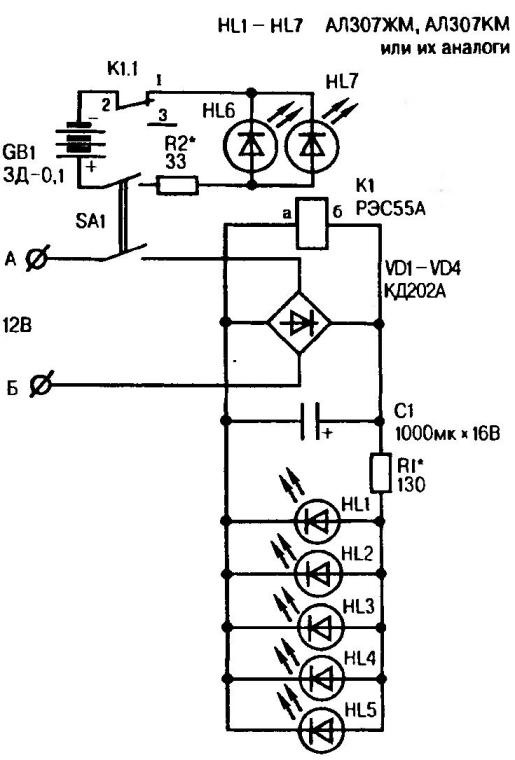 Revision circuit diagrams of the internal illumination model train car
Upon de-energization of the track relay K1 loses power and connect the led HL6 and HL7 to battery circuit. The number and location of LEDs are determined empirically depending on the size and layout of the model of the car. Based on this well placed and electrical equipment. The resistances R1 and R2 are selected depending on the number of LEDs and their parameters. Three battery D-0.1 is installed under the bottom of the car, are connected in series and close imitation of undercar equipment boxes. Next to them is the standard connector for recharging the batteries. Since the current consumed by LEDs is very small, the battery life is quite large. To serial battery they connect the wires with neat soldering.
The proposed scheme resembles the work of electrical equipment of the present passenger car, where the motion energy is generated by the generator, and the Parking lot and at low speed comes from batteries.
I. MALININ, Pskov