Wings, like aviation, has already appeared on the car. At first it was a triangular plane, similar to the fins of fish. The intent of the designers, like “architectural excesses” was to give swiftness appearance. Then, when the car began to compete in speed with the wind on the wings remembered again. Only now they were needed to help the car better “hold” for the road, push him to the ground. The fastest, now not only establish a plane, located above the rear part of the body, but the front of the front wheels to the track pribavlyaetsya small side wings.
And modelers — people meticulous. First aviation items appeared on copies, to understand what was happening, someone had the sense to use pressing and lifting force. And since competitions are increasingly common high-speed cars and planes, whose rear part is like the tail of the aircraft. During check-in stabilizer keeps her in the air, the model for the track only one wheel (or horse) of the three. The other two is not that of microsleep-a-row.
However, the place of such a wing is always one behind. And actually, why? This is most likely caused by the fear that the model will come off the treadmill. It’s not aviation — rules of the competition is clear: flying model more than a half circle in the scoring statements against your name comes up zero.
Let’s imagine what happens when you check in. A circular track is never perfectly smooth — on the way the aircar will find not one bump, let it be even and very small. (Pits can not be taken into account — the model flies through them with great speed.) In the usual scheme of the front wheel, riding straight at the obstacle, throws the bow up. Body, pivoting around the center of gravity, increases the angle of attack of the main rotor stabilizer, and the increased lifting power makes the climb after the nose and tail. Here will not save and the tilt of the axis of the engine down (by the way, this inclination not only contributes to the pressure to the ground, but also increases friction losses). So, the model breaks away from the track. When “landing” is uncertain back, have time to fade, if only for the way the wheels will meet the next obstacle.
It would seem ideal to reduce rolling friction (or slip ka snowmobiles) scheme in real terms “does not work”.
Now try to mentally move the bearing aerodynamic plane forward. Does the probability of the model launch? When you hit a bump the only thing touching the ground wheel is now the back — lift is not a nose and tail housing. Therefore, a turn around the center of gravity will lead to a decrease in the angle of attack of the stabilizer.
This will reduce and its lifting force. There are other advantages of this option: the axis of the motor must now be deployed such that the propeller thrust was aimed at a slight upward angle. This will reduce the required lifting force of the stabilizer, and along with the rolling resistance of the wheel. And propeller, became a pusher will have the opportunity to work in more favorable conditions. In addition, no harmful 1 resistance resulting from the blowing of relatively large cowling the high-speed swirling air stream from the propeller. 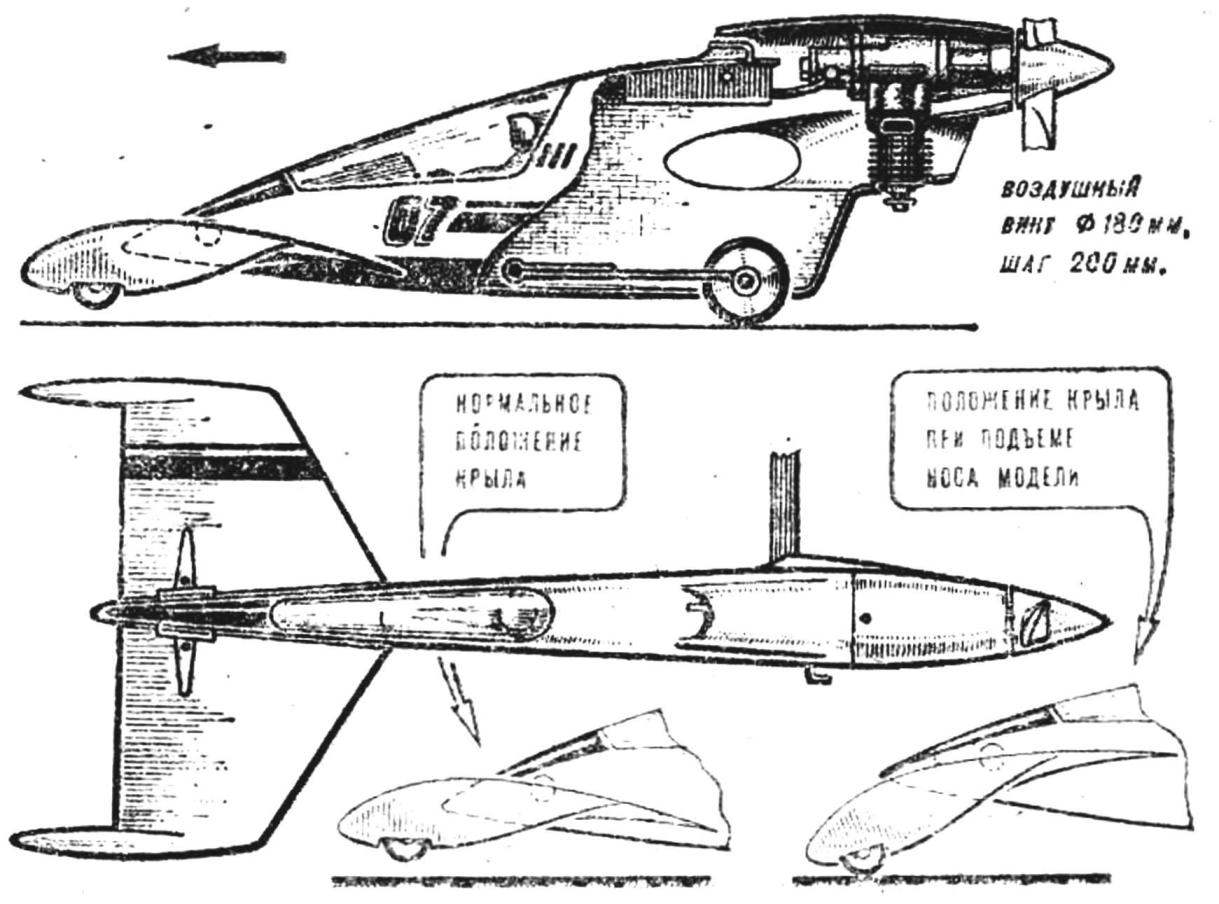 The model design is nothing special. Try just drawing it, to ensure that the distance between the axis of the screw and the ground was minimal. In order to protect the model from possible takeoff configurations, experiment with the swing stabilizer automatically reduces the angle of attack by lifting the bow. The only thing we must not forget when drawing, the axis of the suspension stabilizer should be at 23 – 25% mean aerodynamic chord, and the weight balancing is to ensure the lowering of the front edge while lifting the nose. Wing plane is best made of thin sheet duralumin. Give them a profile weakly concave plate, sakiroglu the front and rear edges and by bending the sheet on the wooden template. Bent down the ends serve as the mounting location of the front wheels and carved from basswood fairings. The axis of suspension of the rod D16T, which cuts riveted half of the stabilizer.
Main wheel must have a very soft shock absorber. For this purpose, suitable long plate “spring”. Rear axle it is best to set after it is determined the center of gravity of the model. The axis of rotation of the wheel should be as close as possible to the center. The rules require that a model with an inoperative engine was on all wheels (skis), not falling on the tail. When we adopted the axis position required lifting force created by the stabilizer, and hence its resistance, will be minimal.
V. IVANOV