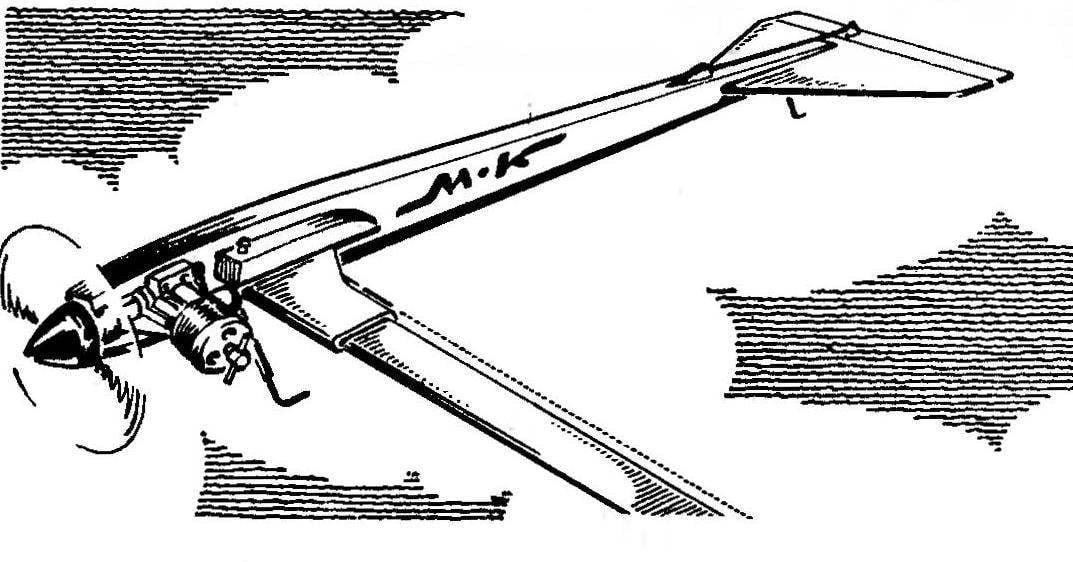 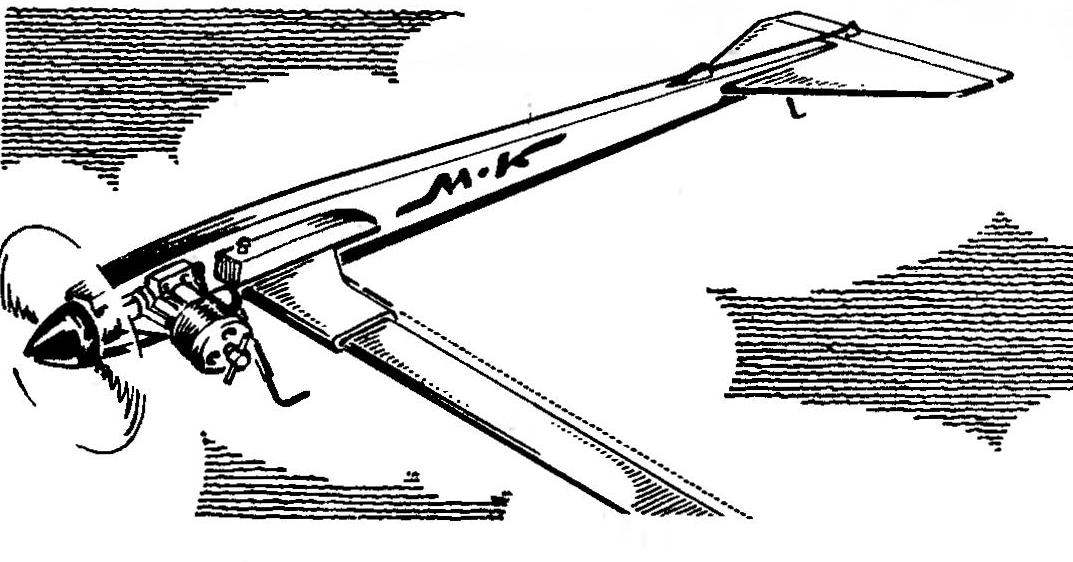 Currently a subclass of “school” high-speed cord does not Shine sport results. The competition clearly shows the separation of equipment into two groups. First, as a rule, are simplified “veneroida” contour type, which, if a young athlete is able to cope with the management, you can show only average speed, and even then with a good engine. The second group consists of devices created exactly according to the samples of a champion techniques (if not outright borrowing occurs). Do note that the gap between the two groups as the quality of the models and their flying capabilities, and initially decide the issues is very high. Poluchennye contoured speed are likely only tasks “to designate” the presence of this class at the event.

Slightly to decrease the gap in technology, we are in preparation for the new sports season, I decided to go look for them. Leafing through magazines, and came across an old publication in the “M-K”, which described the wing tape that promised unusually high results.
Errors in the theoretical calculations, confirming the utility of the proposed “M-K” solution was not found. So why still the competition had no such models? We came to the conclusion that athletes (namely the masters and we calculated the material) was diverted from the construction of such devices two points. The first technological challenges to create a wing span of over three metres and his fears of vibration in flight. The second — a very small “base” model in the proposed variant. The fact that for steady horizontal flight with the chord, is equal to literally a couple of centimeters, alignment should be maintained with an accuracy of a fraction of a millimeter! Of course, in such a situation is to debug the prototype before it is broken, difficult, because the alignment will affect even the degree of filling of the fuel tank.
To get out of deadlock, we allowed a simple trick. Keeping the wing-tape, with all its advantages, we replaced the rounded “fuselage” is quite common, which is including to embed classic tail at a large distance from the wing. Now, despite the ultra-low chord, the permissible limit of alignment has expanded to the achievable limits. Some increase in aerodynamic drag caused by the inductive component and the increase in wetted surface, does not count compared to the gain from a super-long wing.
The solution to the problem of improvement of technological properties was much more complicated. A lot of time we spent in search of available today management node, based on the rejection of the passage of the cords through the wing. Now this wing can be made of wood, as it… was, in fact, part of one of KORD! And the second is directly behind the carrier plane is “hiding” thus in her wind shadow and not adding additional resistance. 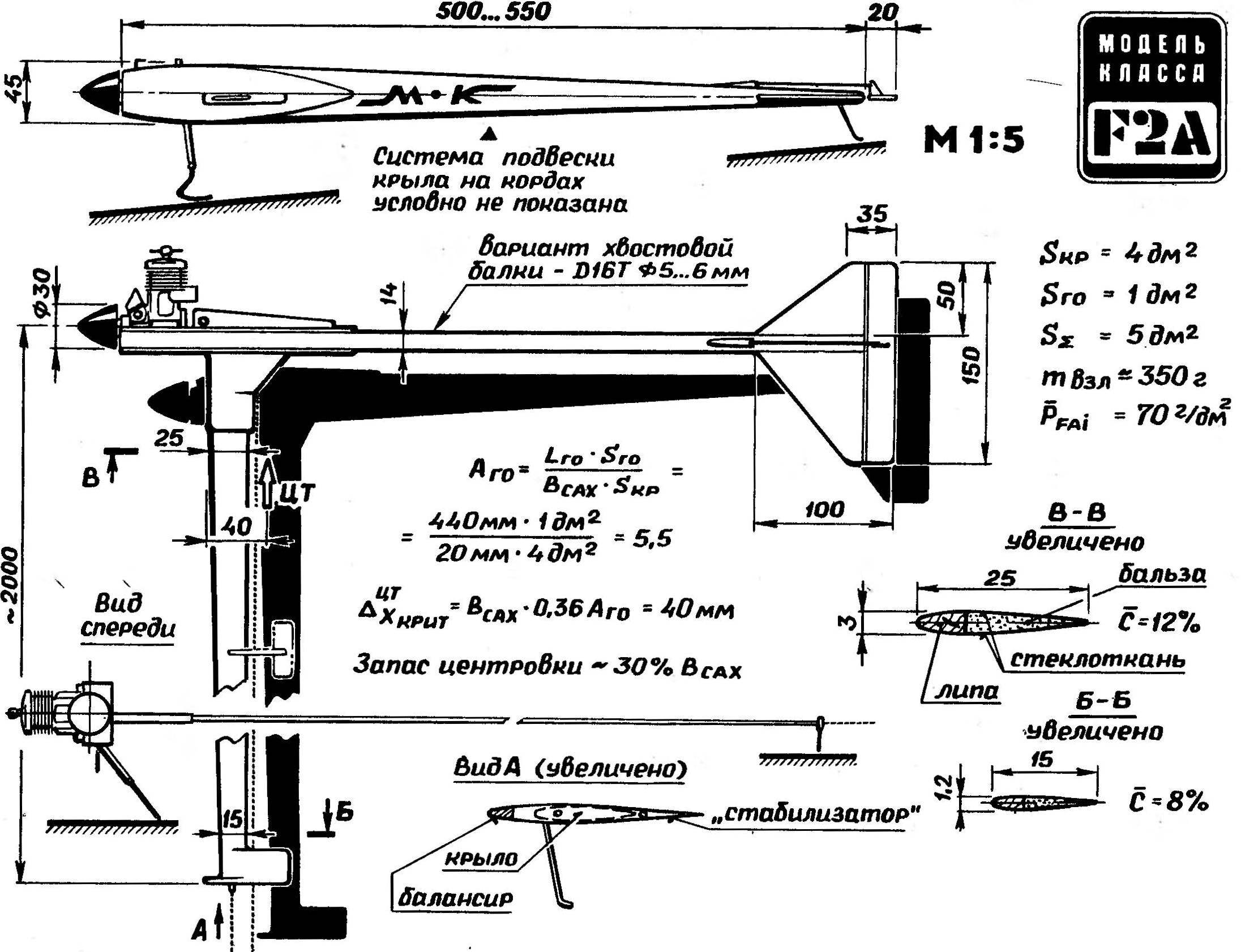 P and p. 1. High-speed model of a conventional circuit with an elongated wing:
shows original version with the external location engine, which together with the tank later transferred to the inner side of the fuselage. 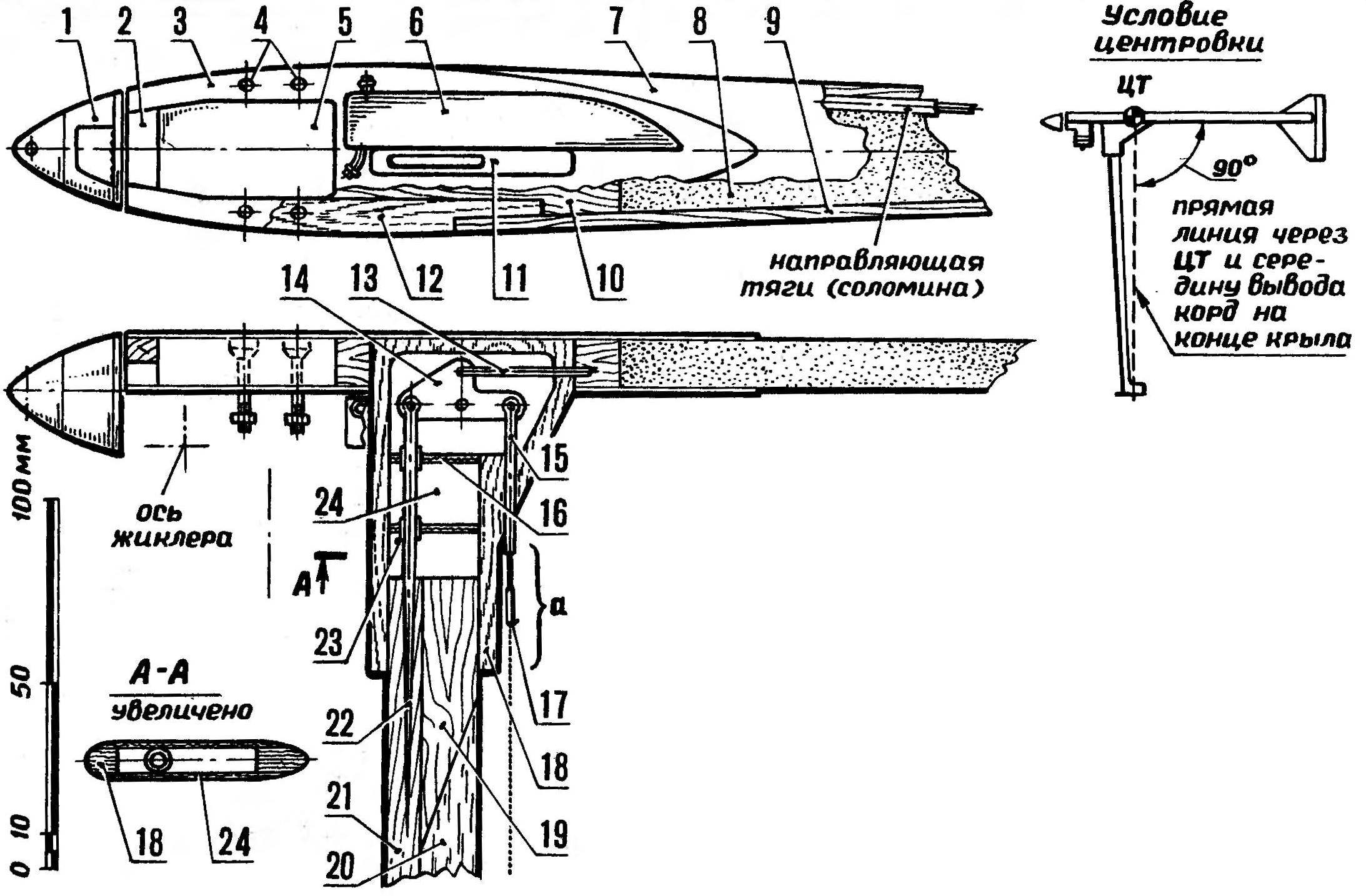 R and S. 2. Power part models usual scheme:
1 — spinner, 2 — the jumper (Linden), 3 — lining (plywood 1.2 mm), 4 — bolts MZ engine mounts (to glue the rods to the motor), 5 — external panel (plywood 1.2 mm), 6 — fuel tank 7 – covering the tail boom (Whatman) 8 filler (foam PVC), 9 — longitudinal beams (pine section S X 13 mm), 10 — power insert (Linden 13 mm thick), 11 — box of the wing, 12 — bar motor (beech or hornbeam), 13 — pull steering (OVS wire diameter of 1.7 mm, held in the foam tail boom guide through a straw), 14 — rocking (two identical parts of D16T with a thickness of 1 mm, United at intervals of 1 mm), 15 — adapter (steel, at the end of the run the ear thickness of 1 mm with a hole diameter of 1 mm), 16 — falcinellus (plywood 2,5… 3 mm from berekley), 17 — carbine, 18 — box base crcla (plywood 3… 3.2 mm), 19 insert (lnpa thickness of 3 mm), 20 — sanayasi wing (balsa medium density), 21 — front wing (tight lip), 22 — power rod-pull (wire OVS 2.5 mm diameter; shank to be grinded, degreased, wrap with thread and glue on the resin in the wing; the end to take the form of a lug), a 23 — tube (brass), 24 — a wall box (plywood 1.2 mm). Zone “a” after the Assembly tight to wrap the threads with epoxy.
However, there is one subtlety, to know and to consider that it is imperative. Is the elasticity of the cord in tension. In order not to complicate the arguments, we will present only the final calculations.
First, you need to determine how much stretch cords when flying at maximum speed. To calculate you need only two quantities: the mass of the model n its supposed speed. Then there is an elementary substitution in the formula of the centrifugal force. So, for example, speed, weight 320 g, giving a top speed of about 180 km/h (50 m/s), will pull the strands with a force of approximately 5 kgf. Now, denoting the force F, use it in the following formula:
Delta L=3.2 F,
where Delta L is the increase of the lengths of the two cord diameter of 0.4 mm with a length of 16m.
Similarly, the calculated elongation of the cord is 0.3 mm, only the coefficient here is equal to 5.7.
After the calculations in our example, we get Delta L equal to 16 mm. this means that when replacing two metres of thread other, much more rigid body (wing), after the high-speed mode there will be a reorientation of the neutral position of rocking on the 1 mm shoulder suspension cord. To clarify, we note that a complete shift is 2 mm and it is distributed over two shoulders rocking. At higher speeds and the mass of the model, the situation is aggravated; in the case of rocking with a small “scope” of its permutation caused by the stretching of the cord, can greatly affect the neutral position of the rudders. While driving the speed has to take into account this factor.
In principle to get rid of a departure from the neutral easy. Enough rocker to make a little raznopolaja (in proportion to the hook lengths of the cords). But we think you should not do that. After all, at takeoff and landing when speed is low, you have to lift the handle up. If you choose the right location of the control horn rudder (top or bottom of the stabilizer, depending on the “internal” or “external” direction of traction of the shoulder rockers), the nature of the piloting can only get better!
In debug runs, it is useful to set in the middle of the wing span for the small stabilizer bracket-ing plate. This will help prevent twisting of the plane, if in the process of its manufacture was the inaccuracies. In the normal behavior model of this element is removed, and all functions of stabilizing the end of the wing assumes a specially contoured ending.
Another option is the possible use of the wing-strips, a high — speed configuration “duck”. Its alignment such that it can accommodate cords in front of the wing. Think that’s the best option, as here the “tape” generally is not subject to twisting efforts: in flight it is almost hanging on taut cords! In addition, a clear orientation of the filaments one another in the complex with the effect of aerodynamic Yeni, in which he will “hide” the wing, will give the machine a good aerodynamic characteristics. It is important that simultaneously obtained gain in resistance and to transfer the plant to pushing the option. So it will be refined fuselage, and fixed its blowing a high-speed jet from the rotor. Manufacturability duck, simplicity and reliability of the model will turn out higher than the microplane normal schemes.
In conclusion, I would like to note that the next step would be the wing-tape, molded from carbon fiber. The stiffness of this material will increase the elongation, bringing the wing span up to 3-3,5 m. When the thickness at the root of about 1.5 mm and 0.8 mm the end is so long the plane can still be lifted in the hands, holding the fuselage of the model that will remove a possible issue on the part of judges about the extent to which lengthening the glider is the wing and meets the classification requirements as a carrier element of the aircraft.
V. ZAVITAEV, engineer, master of sports