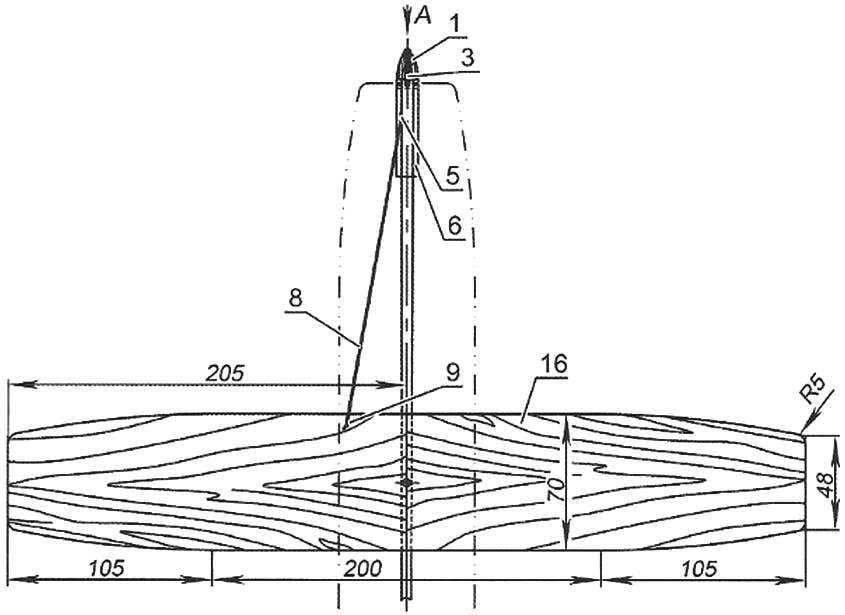 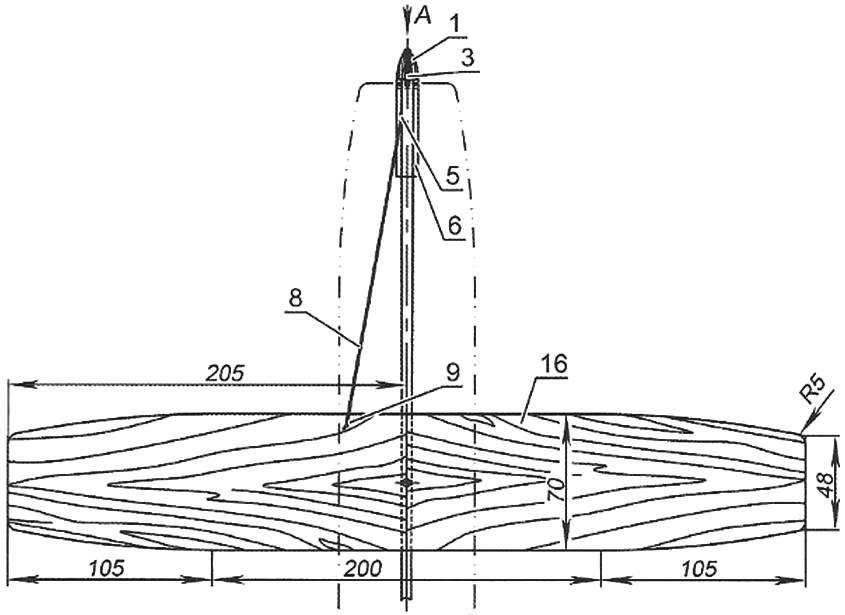 The idea of turning the wing on the model rocket plane was implemented nearly forty years ago. Its author is Anatoly Z. Gavrilov – head asiacruise from the city of Krasnozavodsk in the suburbs. It had I far into their school years, learned to build flying model airplanes. Like many modelers, we moved to “the rocketeer” after the first space launches. Moreover, it was a completely new direction in children’s technical creativity where they can show their imagination in the construction of flying models. Today such a scheme more perfect, with the folding and rotation of the wing, called “Moscow”, widely exploited by rakotomalala.

There is a perception that new is well forgotten old.

This is what trying to implement simple machines “rocketeers” of the new generation on the basis of the first model with a rotary wing, come from today’s technical requirements and construction technologies.
The fuselage length of about 500 mm – glued two strips of Linden-section mm 6×3 and 4×3 mm. cross Section T-shaped (t), which provides the necessary rigidity in bending and in torsion. In the bow, bottom (narrow rail) attach the pylon balsa plate with a thickness of 3 mm and dimensions 40×12 mm, and then the container mrad. It is formed of three layers of glass, of a thickness of 0.03 mm on the mandrel with a diameter of 10.3 mm. After drying the binder, the billet is treated with fine emery paper and cut along the length 50 mm. In the forward part attached to the fairing from basswood and drilled around the circumference of the damping six holes with a diameter of 1.5-2 mm. from the Front to glue the pylon fairing, which ennobles the nose part of the model.
The tail part of the fuselage slightly tapered in width and thickness (1 mm). At its end is fixed tailplane – stabilizer and fin. They are cut from the balsa plate, 2 mm thick, handle on the contour and covered with a nitrocellulose lacquer. 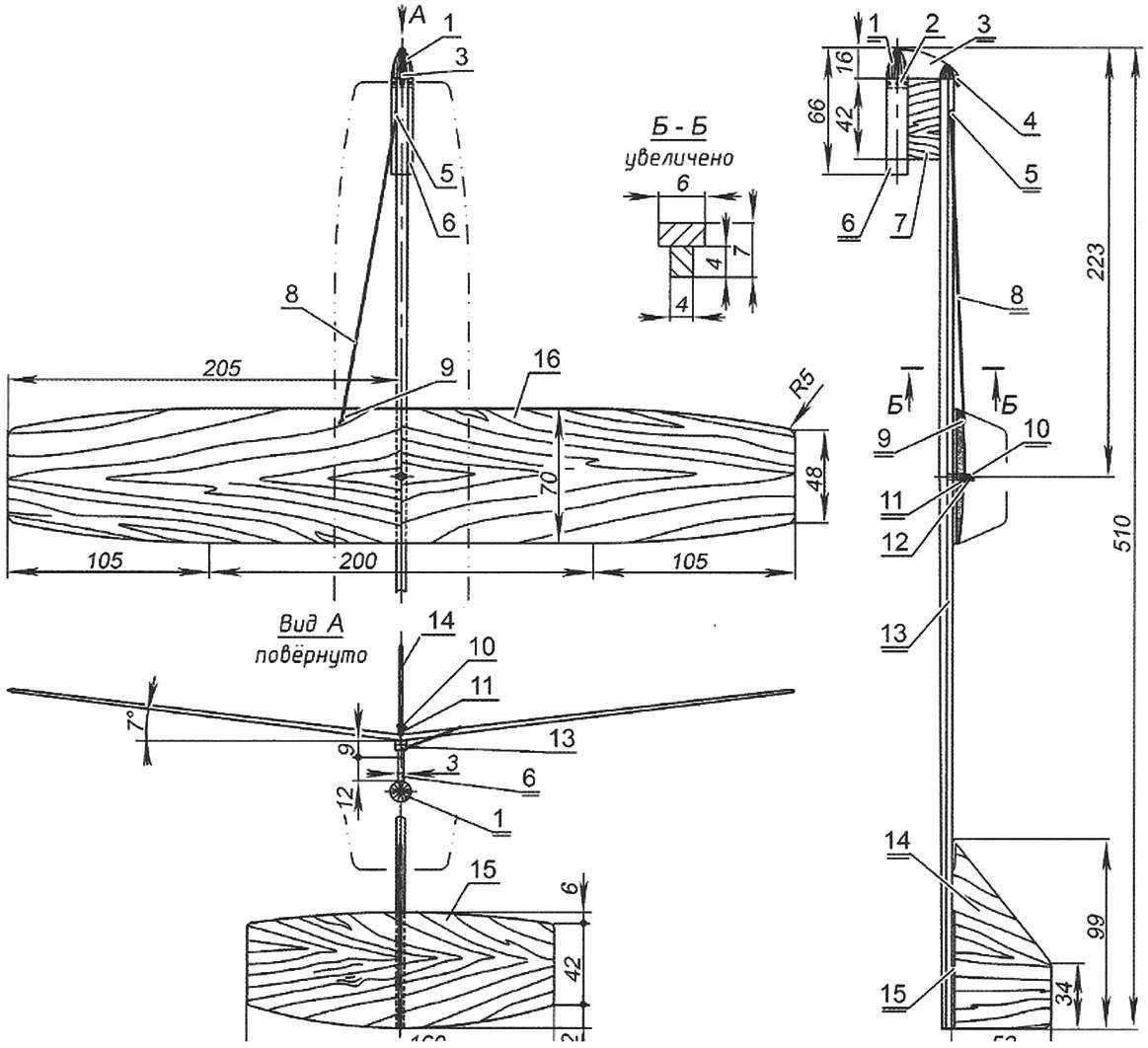 Model rocket plane (Ѕ4А) navaratnam wing:
1 – fairing; 2 – damping hole; 3 – strut; 4 – the focus of the wing; 5 – rack; 6 – container mrad; 7 – pole; 8 – elastic return wing; 9 – clip gum return; 10 – nut; 11 – spring; 12 – the axis of rotation of the wing; 13 – fuselage; 14 Kil; 15 – the stabilizer; 16 – console
Wing – elliptical shape in plan, made of balsa veneer 2.5 mm thick, handle on the contour, profile (profile – PLANO) and coated with a layer of nitrocellulose lacquer. Then it is cut into two parts (console) and link (to create a corner “V”) between an aluminum plate of 0.3 mm thickness. Its glued on epoxy resin to the face side consoles. Bottom, at the junction of the glued strip of silk of a width of 20 -25 mm. In the middle of the connection check hole with a diameter of 2.5 mm, through which the wing is put on the axis of rotation, mounted on top of the fuselage at a distance of 215 mm from the fairing. And in the same place on the fuselage glue the support plate out of plywood with a thickness of 1 mm, glued in two parts at an angle and creates the correct angle of the “V” (about 7°). After installing the wing on the axis of the fuselage put on top of a spring and fix its nut. The purpose of the springs is to insure a tight fit of the wing to the pivot plate.
From the bottom to the left of the console, glued the cut fiberglass, which is the focus of the rotation of the wing in its disclosure for planning. For fixation of the wing at takeoff at the end of the left console, drill two small holes into which threaded the thread to hold it.
PREPARING TO RUN
The wing is placed along the fuselage. For this purpose it is rotated 90° counterclockwise. While the left console, it comes in a cutout of the keel, and the right to focus the forward fuselage. Hooks in the left console and the fuselage hung the elastic return. To prevent unintentional rotation of the wing through the holes on the right hand console and the damping hole of the container thread and knotted it. Set MRD and mount the model on the guide bar. Guide rings are fixed to the fuselage at the place. The starting weight of the model is about 23 grams. This is followed by the command “start”.