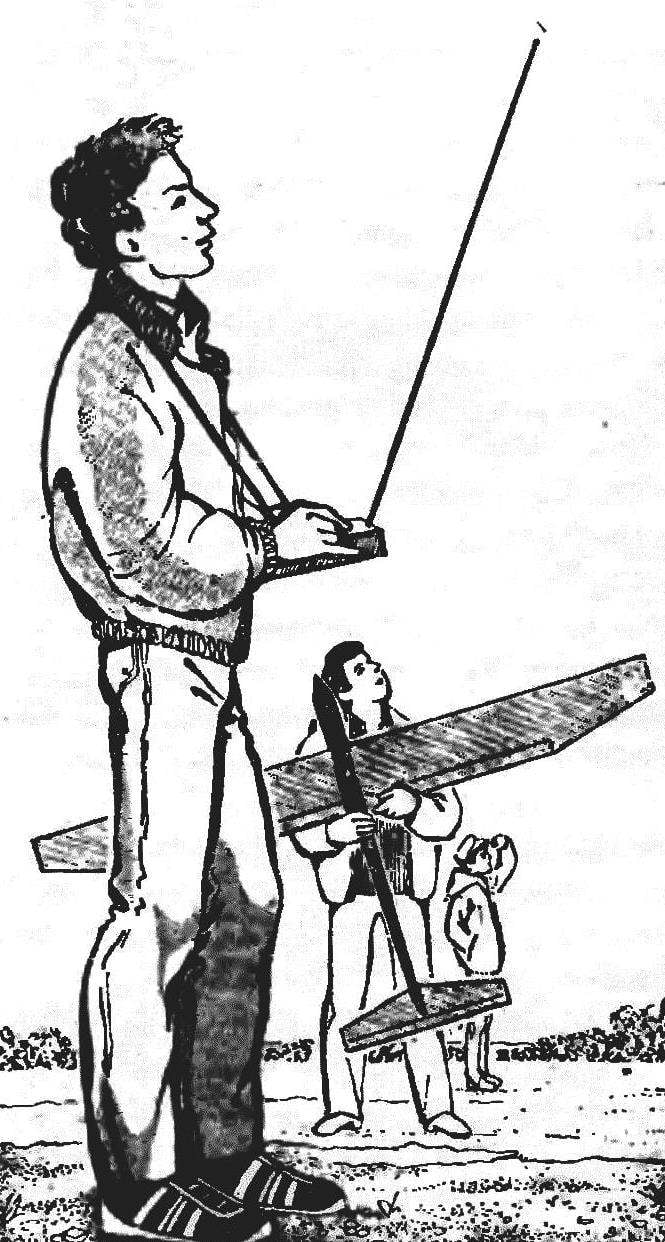 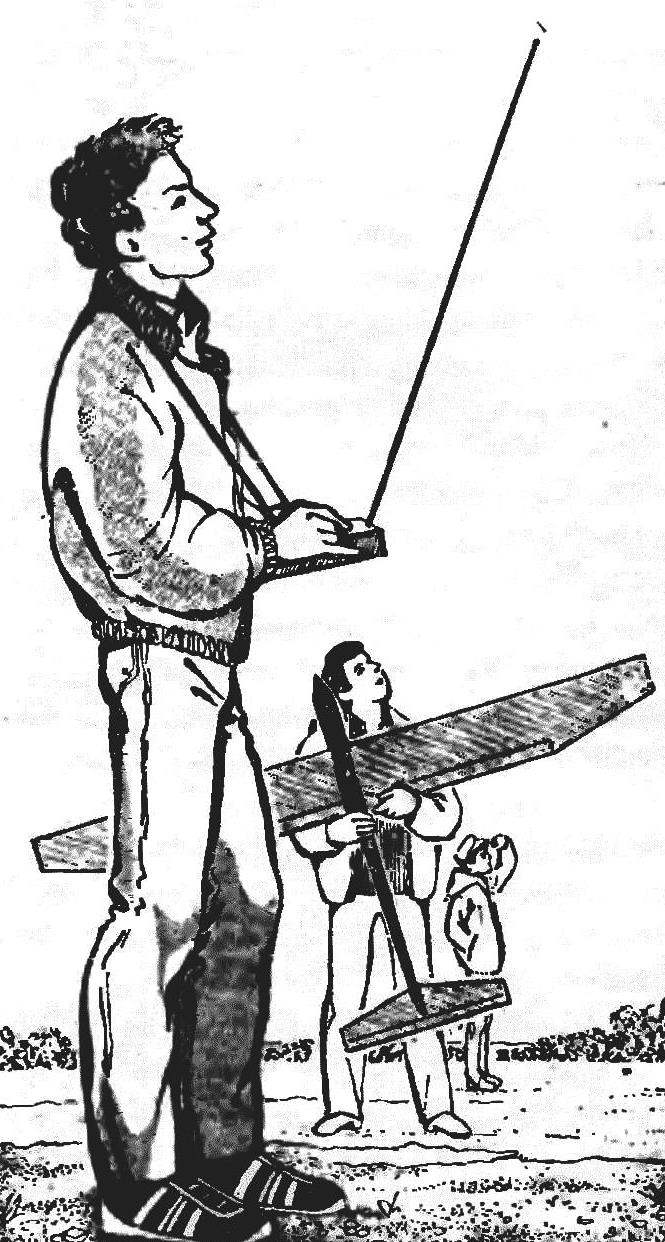 We are all accustomed to the fact that it is a machine fit only to acquire initial skills of piloting. In most cases, training is built almost without any requirements for in-flight properties. The main thing — to provide the maximum ease of manufacture. Eventually, when the athlete will be accepted for the design of the following models with which it will compete, will be subject to calculations and aerodynamics, and strength of materials, and materials science. But at first — what to suffer, whether… And see the light polulotosa “snags”.
Yes, no doubt, the first experience even for such models you can buy, and they are built really quickly. But… do they? Judge for yourself. Skills acquired, developed some automaticity in different situations of conduct in a General nonvolatile APPA-
rata. And then the athlete moves on to modern machinery, demanding and very strict in management, as a rule, created by the best world samples. Here it turns out that all the experience gained in training are useless. The difference in the behavior of the “school” and sports “projectile” is so great that even if the latter remains intact after the first flight, time and effort on mastering it takes no less than for the construction and training with the first model.
So isn’t it better to spend the time on proper design of training, bringing its flight properties to the standards of aeromodelling equipment, preserving, of course ease of manufacture?
So, try to create a model. First of all, define the basic requirements to design: the maximum simplicity of construction and Assembly and high remotepoint. Please note — there is no mention strength. But many novice modelers that she assign a decisive role… make a major mistake! Attempts to harden the individual components and parts will inevitably lead to a weighting unit. It characteristics deteriorate markedly increases minimum flight speed. And, as a consequence, the accident at the inept actions of the pilot. In some cases, the desire to enhance the strength leads to the fact that preteenanal model can not handle even the venerable piloting.
So, in the ideal, as in large aircraft, the strength of all units and parts should be minimal, i.e. such that the model is not destroyed in flight. Only then the flight characteristics will allow you to “course” pilot training quickly and without breakage of apparatus, without turning the control in a painful “fight” with a naughty model. Note important law: the strength of the whole model is always determined by the strength of a single element — the weakest one! To enhance the individual nodes are pointless, the design should be durable. 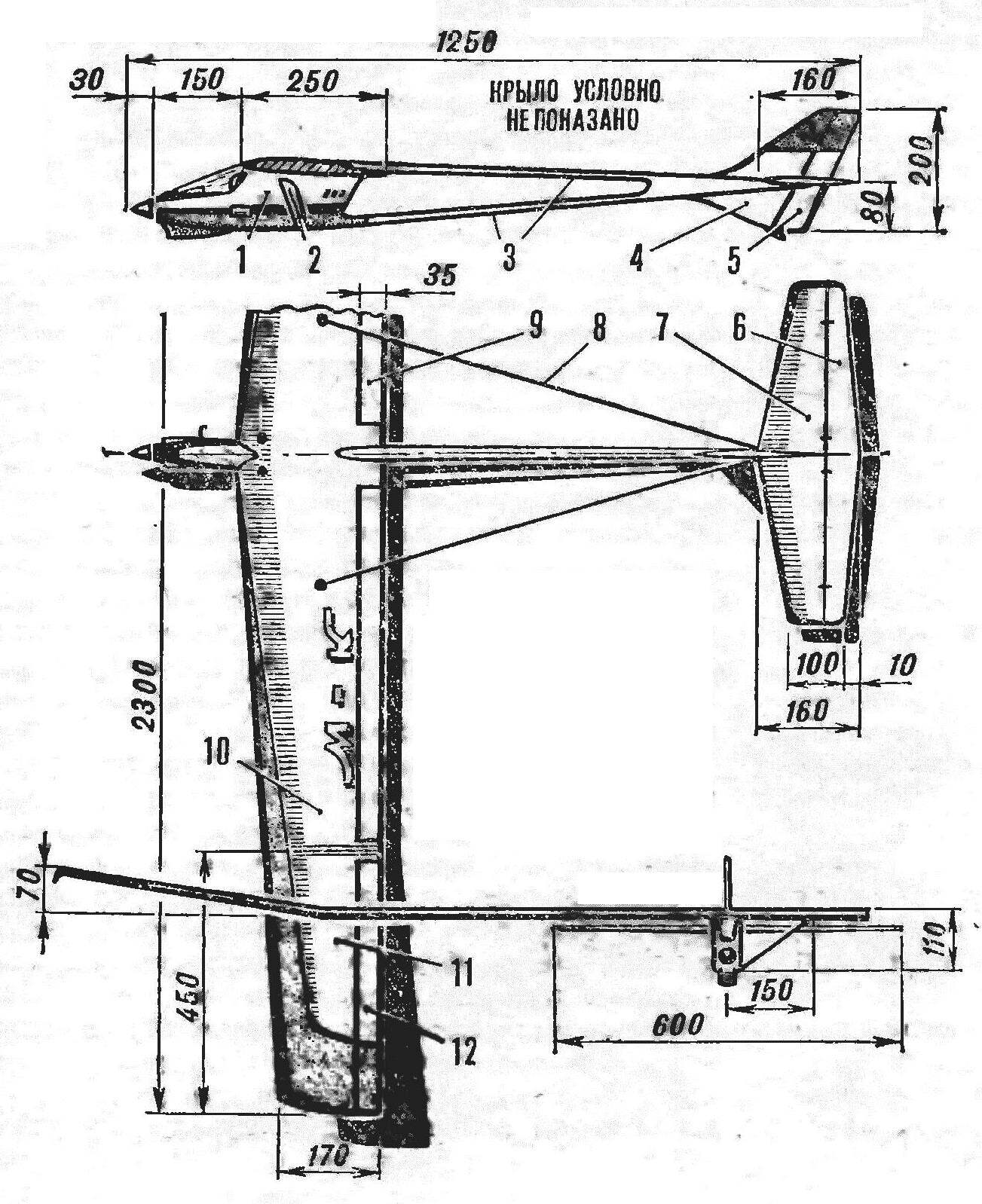 Radio controlled aerobatic model, glider:
1 — the nose of the fuselage, 2 — brace, 3 — beam fuselage, 4 — Kiel, a 5 — rudder, 6 — Elevator 7 — regulator 8 — stretching the tail 9 — flaps. 10 — the wing.11 — ear, 12 — Aileron.
Now the requirements for in-flight properties:
— minimum steady flight speed, providing the time for making the correct decisions necessary in the absence of automatism from an inexperienced “pilot”. It would be good to vary flight speed in the widest limits, then learning later it will be possible to keep it up
prior to the transition to modern sports equipment;
— high resistance and good handling. The sensitivity of the controls – ideally, can and should be regulated. In addition to a wide range of speeds, it is desirable to have the possibility of significant changes to the load-bearing properties that turn either model into a good glider-soaring leader or flight microplane;
— need and high academic power-saving model when entering unexpected for the novice pilot’s position near land;
— should be good and performance: without any problems like “universal” obliged to fly with it.
Might sound that demands too much, they are too contradictory. Unthinkable to do such a study. . But still let’s try!
In accordance with the first condition of flight properties select the type of the model glider. More precisely, the glider, and with a powerful engine, having the control of “gas”. This, in turn, will provide high power models if its mass is not too large, and simple take-off.
Now, about the mass of the machine. The fact that it is not only closely linked to the minimum satisfactory strength, but with the choice of the main dimensions of the training. Taking the specific load on bearing surface is 25 g/dm2 corresponding to the load is very good paritala, and choosing an engine, we can find the total area of the planes.
The engine needs to be selected based on the maximum ease of starting in all types of winter conditions and the ease of operation of the entire plant. Most suitable motor KMD-2,5 . With the glider, equipped with this engine, it is possible to train all year round, it is sufficient for a small, even aerobatic models, it has a significant resource and keeps stable mode in a wide speed range. 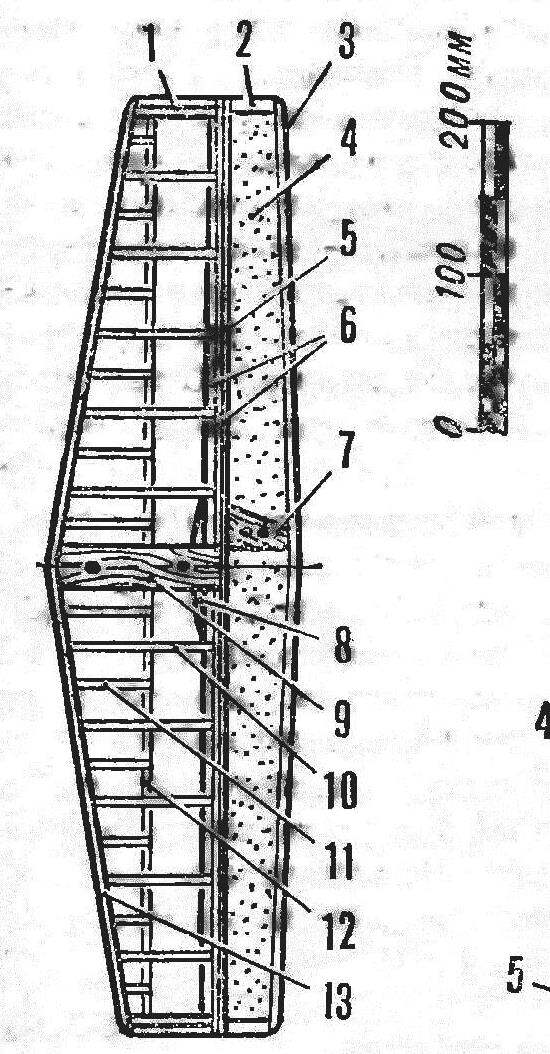 Wing design:
1 Central panel, 2 — beam, 3 — edging of the flap, 4 — filler flap, 5 — a wall the rear edge 6 of the rear edge, 7 — rib, 8 — rib oblique,9 — spar, 10 — the tip of the flap, 11 — rib joint. 12 — the guide pin. 13 — ending, 14 — toe, 15 — cover, 16 — wall of the front edge 17 is the leading edge.
It should be noted, adaptability and cross charm set. You will not have to experience the difficulties associated generally with the manufacture of the ribs for a trapezoidal wing — for all consoles with any narrowing of the technology alone. First of all, the templates are cut and the root end section of the wing lowering the contour corresponding to the thickness of the “working shell”. With some heated by electric current of a wire from a foam block cut the workpiece. By “scope” it is equal to the total thickness of all ribs and olunurlar for one console plus losses for the next sawing into its individual parts. Using the remaining after cutting the foam pieces back profile, the clamps, sheathed billet lime or birch veneer in epoxy resin (the layers of wood — just across the wingspan!). If you want to increase the thickness of the “skin”, use several layers of veneer sheets, thick plate may not follow the contours of the profile on the most curved parts of the nose rib.
After complete curing of the resin workpiece is sawn into individual parts thin circular saw or converted industrial wirelesscom. Rib through one shortened, forming a nasal polonaruwa, followed pasting of areas of intersection with the front edge of the paper.
Wing Assembly is carried out by conventional methods. The only requirement is to provide maximum symmetry of the left and right consoles. The stabilizer design is similar to the planes of the wing, some of its elements only in reduced cross-sections.
The drive system of the ailerons and flaps are not shown on drawings — it all depends on the type of the applied equipment and servos. In any case, we should strive to place cars in the volume of the center section. This will help to get rid of unnecessary nodes in the intersection of actuator and the difficulties associated with preregulatory management on accidental discharges of the wing. And the fuselage will be possible to design smaller and lighter. Ideally, in the center section houses all the servos and receiver in the fuselage is only the power supply and the drive control gas engine. Thus further reduced the weight of the fuselage I decreases impact vibrations from operation of the plant ia the reliability of onboard equipment.
Plating of bearing surfaces — Mylar film of medium thickness. On top of it privacyrelated long staple (micuenta) paper. The result is a durable, puncture-resistant and impact plating of sufficient stiffness and roughness. Steering elements upholstered in thin Kraft paper on the PVA glue and finished the two-component parquet varnish.
As you can see, the wing and stabilizer (keel similar control elements) can be made according to the strictest standards of aviaconstructora, light, rigid and strong enough. Will try to do the same and the fuselage, still not forgetting the manufacturability training. It still was possible to do without the use of complex tooling, balsa needed except for “raising” of the spar to the level of the ribs.
The nose of the fuselage carries the engine and some elements of the radio apparatus and serves for fixing relative to the wing. Moreover, it is necessary to consider: the shorter the part, the less load will occur at the points of fastening to the wing and the harder it will be. Therefore Prorsum fuselage with minimal removal forward, assuming a small mass tail of the model. The midsection it is compressed to the limit, a plywood Board, sealed with a light longitudinal frames and set almost all s close round the engine, tank and side part of the apparatus.
It remains to decide which will be the tail part of the fuselage. There are many options, the best is… bestuality! Its function takes on a fork-lift beam. It combines such advantages as lightness, extraordinary ease of fabrication and remotepoint. Each shoulder beam is a square tube made up of four pine slats of variable section. In the transverse direction, the tail portion is fixed relative to the wing by a pair of braces from wire d 0.5 mm, the nodes of intersection of the beam with the fuselage and wing is split with the impact model.
Control linkage to the rudder of the tail rope, it is easy to hide inside the hollow of the shoulders of the beam. But at first, when the probability of accidents is sufficiently large, it is better to leave the cables outside. This will facilitate the readjustment of the system after repairs. Stop talking about management, we need to warn modelers from trying the drive flap. Their large area causes, even at low speeds the required control effort, far exceeding the capacity of steering cars of domestic production. Chassis model was not provided.