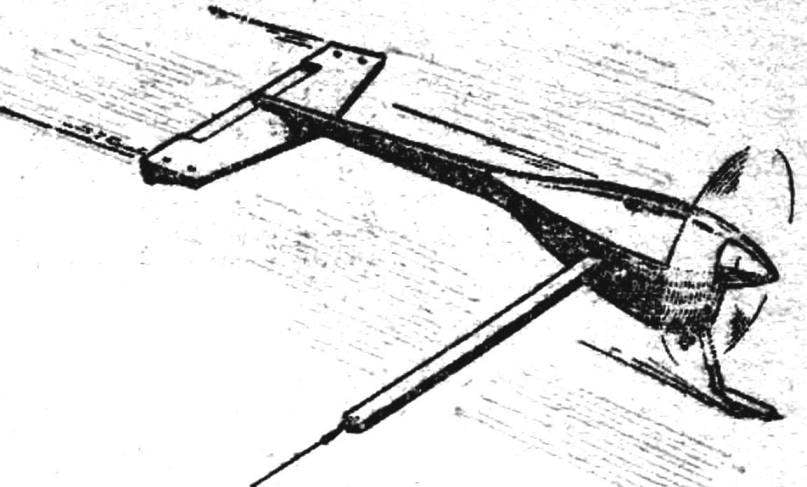 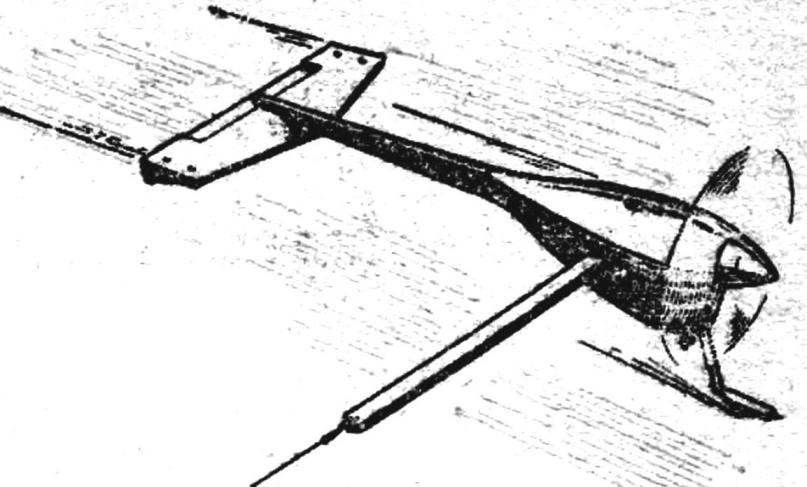 Enjoy well-deserved popularity at start-avtomodelistov kordovye racing snowmobiles and cars. Probably every athlete, behind which there is victory, not the competitions of the highest rank and world records, began their journey to the heights of excellence with such uncomplicated “Vertol”. The advantages of the aeromobile is their “all season”. Boy, replacing wheel model horses, can train in winter. But how hard would it be to force yourself to stand up for plumbing bench almost every day if the nearest exit to the Assembly lasted for long autumn, winter and spring…
With two simple cars from abundant materials and we want to introduce beginners avtomodelistov. The ease of handling a small number of parts allows to build models of just a week, and then on the track to compare the advantages and disadvantages of both schemes. In both variants use many of the same elements. It will help even faster to get started with the first sporting equipment and test it.
The main construction material “Vertol” — wood. Its treatment, even for pupils of 3-4 classes. Working with metal has not the power. And the cars out of wood they can do independently, with the exception only of gouging the inner cavities of the fairing. Here need help modelers are older or the head of the circle.
The first version of the model the classical scheme with a rod-like body carrying a pylon with the engine and chassis. Case vystragivaetsja from birch slats with cross section of 15X15 or 15X20 mm to the caudal end of the section is reduced to 8X8 mm. With front rail propisyvaetsya exactly in the middle to a length of about 300 mm, width of cut is 8 mm. is received In a longitudinal groove on the adhesive pre-installed prepared the pylon-engine mount, then the front portion of the cutting is sealed with a birch rail section 8X20 mm could penetrate a window for mounting the pylon, but this work is quite complicated for younger students, and the accuracy of its performance depends on the strength of the entire model. In addition, in the present embodiment, formed a kind of switching that reduce the likelihood of cracking at the time of arrival of the most loaded part of the building. 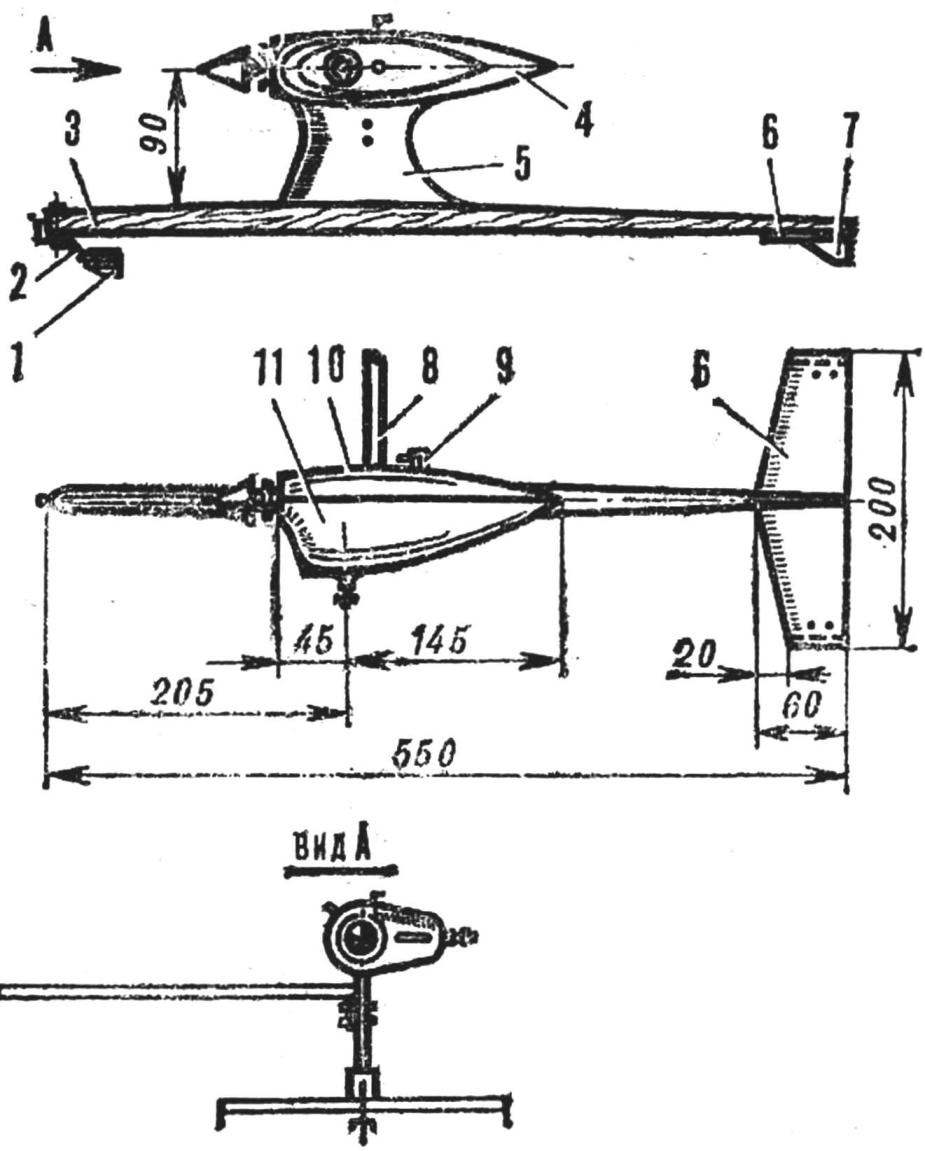 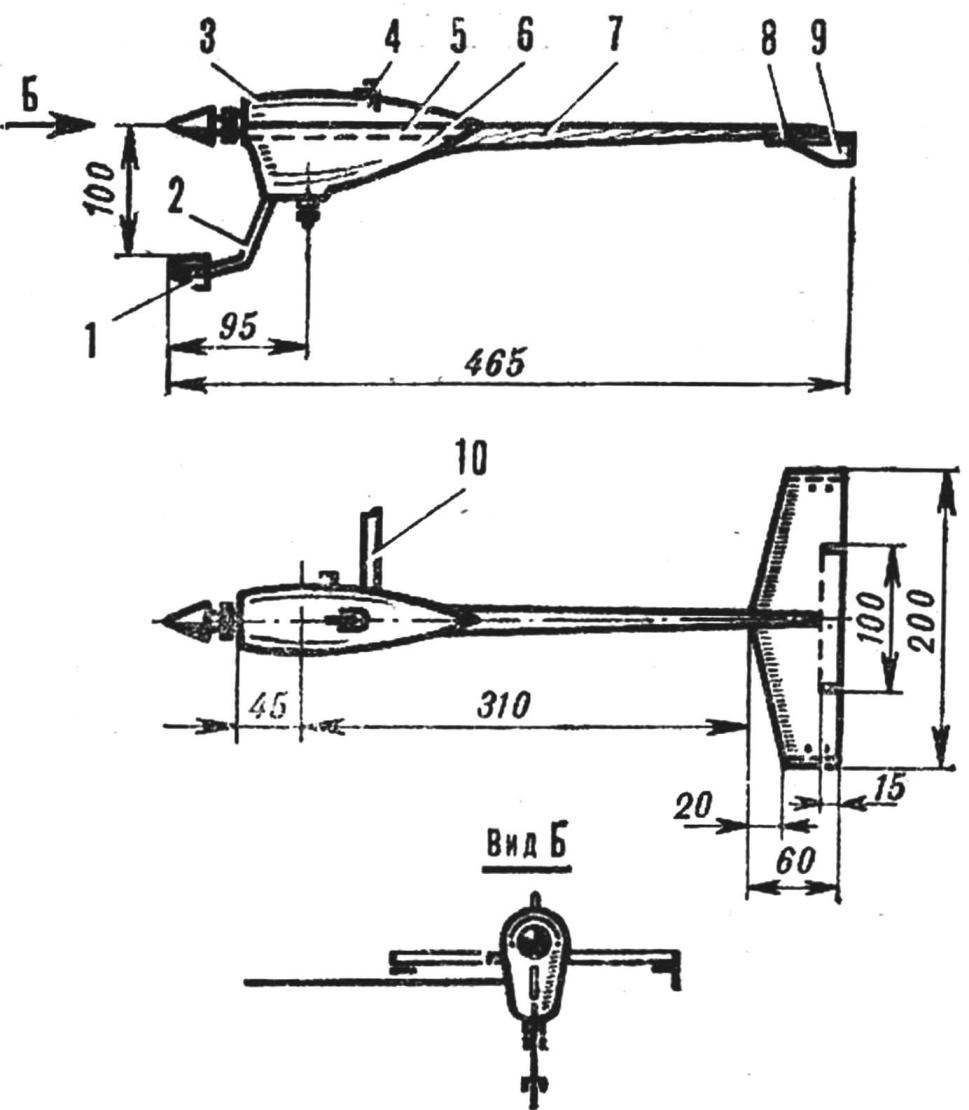 Racing car snowmobile frame type:
1 — front skate, 2 — stoic, 3 — the upper removable portion of the fairing, 4 filling and drain tube fuel tank 5 — plate motor, 6 — lower power part of the fairing, 7 — beam 8 — regulator, 9 — rear horse, 10 — cord strap.
Pylon-engine mount is assembled from three parts. This is the Central part, is sawn from a five millimeter plywood and lightweight due to the recess holes, and two identical side parts made of plywood with a thickness of 1.5 mm. they are then assembled in an Assembly epoxy resin. If not, you can take any vitrocla. In the latter case, the clamp “sandwich” in a vise or a clamp must be primed and dry butt surface and then apply a layer of the same glue. After thorough drying, the pylon filing, the contour is rounded its front and rear edges are fitted to the engine, fuel tank and the bolts of the engine.
Outside the engine closes the hollow fairing, cut from soft basswood. His right side after coating the inner surface of the sealed “tightly” on the pylon, the left removable-fixed with a hairpin in the rear and a long M3 screw, hood to tractor mounted on the rear engine cover bracket.
In the cavity of the fairing is the fuel tank. The best material for him — white tin plated tin. We recommend you to use tin cans of condensed milk. Tin was thin enough to bend easily and perfectly soldered. Tank volume of about 20 cm3, that is enough to run a well-oiled motor and his work during a race. The scheme of soldering, drainage tubes ensures the fuel system in one-part mode “drinkers”, with this option the engine does not change speed throughout the race.
After processing derevyannyh details they are three times varnished and enamels resistant to fuel and dried. “The time to engage in the manufacture of parts “chassis”.
The suspension of the front of the main ridge is made of “soft”. The elastic member is a wire clip-spring, with one end fixed to the front end of the rod body. Free, diverging in the form of a plug end is attachment bracket of the skate. Choosing the shape and length of simple springs you can change the stiffness of the suspension over a wide range. It is best just to make some wire staples of various sizes, then choosing the characteristics of the chassis depending on the quality of the treadmill will be easy.
A pair of skates carries tail mounted at the rear end of the stabilizer body. During the race he lifts the entire tail section of the model so that the aircar is touching the track with one front wheel (skate). The stabilizer is cut from thin dural sheet or from plywood with a thickness of 1,5 mm. In the first case, it is useful to perform two cutting to a depth of about 15 mm perpendicular to the rear edge and allocate thus a kind of Elevator. His limb on practice will help you to find a stable position Pauleta model. Tail skates are cut from duralumin profile-area size 15X X15 mm and riveted to lacquered stabilizer. Then the entire Assembly is mounted on the housing.
The second option racing snowmobiles designed for a more progressive scheme, in which the body is almost completely abolished. Left only a light tail boom stabilizer. Thus it is possible to significantly reduce the overall weight of the model and… at the same time to complicate her run. However, the experience with similar “air” samples comes quickly speed as a quality, lightweight unit is much higher than that of the body of the option. 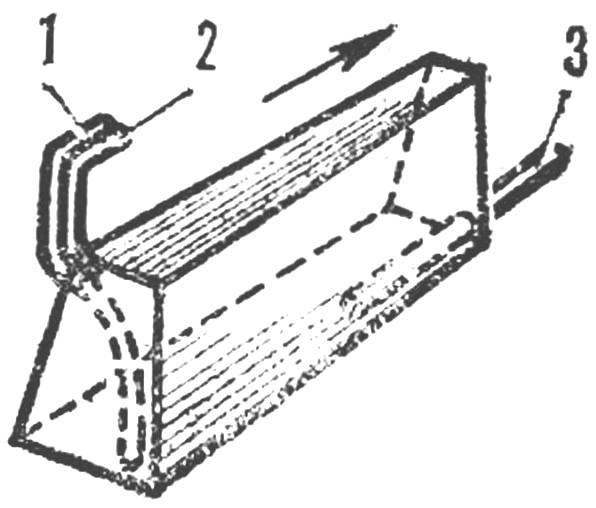 Fuel tank (applies to both models):
1 — drain tube 2 — tube filling (after refueling of the fuel tank is sealed), 3 — a feeding tube 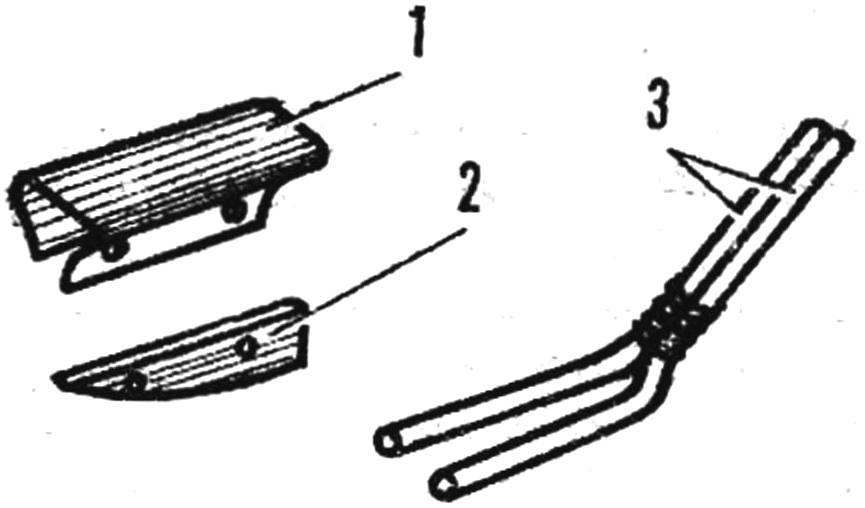 Suspension the front of the main ridge:
1 — clip-clip, 2 — plate of the skate, a 3 — strut; the top of the fork is not shown.
The basis of this model is the spinner motor, which goes into the tail boom. “Feathering” repeats the first model, the stern strut manufactured differently. She also soldered two prosolar, but at the top they diverge and form a wide fork. The free ends of the wire are wrapped with yarn with the glue, and stand neatly sealed on the inner surface of the lower part of the fairing. The bottom of the stanchion is bent forward, forming a foot hinge of the main ridge. This model remains removable lid, the lower power is the mounting location of all nodes in racing.
Both “vartuli” just a few minutes can be converted from a sled into the aircar and Vice versa. To do this, just remove the front of the skate and replace it with a wheel. And the tail wheel are installed on the axles, screwed in the holes on the vertical walls of the corners of the skates.
In accordance with the rules of competition on the race used by the compression engine of mass production. The best domestic grade of 2.5 cm3 admittedly KMD-2,5. It was under him and designed the model. Propeller two-bladed. Refined production of nylon screws 200X200 mm by means of cutting blades diameter up to 170 mm of filing and butt parts of each blade.
Fully assembled and equipped with racing being tested for centre of gravity position, after which the point is mounted dural cord strap.
D. SHEPILOV