So, we are continuing in # 10 of our magazine talking about youth glider schools. More and more young boys and girls are now bosom a small silver-blue rectangular icon UPS. Wear it with pride, as proof that they’ve spread their wings and rose to the first, albeit small, step in mastering the difficult art of flying… Here is one of them in the recent past, cadet, and now an instructor-social worker Moscow city UPS, fitter machinery plant, Komsomol Sergey Kurjak. Tall blue-eyed blonde with curly hair.
Unhurried in his movements and conversation, but feel internally is always assembled and ready for action. Kurjak came to UPS when I was in eighth grade Odintsovo secondary school. An excellent student, he and UPS became one of the best students. Such disciplines as aerodynamics, theory of flight, the material part was easy for him with the fundamentals he met in aeromodelling circle. A little harder was meteorology. But he firmly understood: it is necessary to know to accurately determine favourable for non-motorised flight weather conditions and the local environment. This is the basis of success in gliding sports. In libraries Serge read all the books on aeronautical meteorology, which managed to get. At every opportunity, spoke with the leading glider pilots — record holders and Champions of the country, and now, probably, have studied this subject are not worse than their teachers. He willingly shares this knowledge with other students — his friends. “Though it’s not very necessary now, after the first training flight, loves to tell Sergei, but will probably come in handy in the future!” And the future is the flying club, soaring flights of sports gliders. Sergey decided to devote his life to aviation. In competitions of young glider pilots of Moscow in September 1974, he became the champion of the capital, showing excellent technique of piloting.
Today Sergey Kurjak introduces readers to a device hoist PLM-6 for towing of gliders, designed by V. N. Makarova, with which it flies for three years and knows it thoroughly.
HOIST PLM-6 — A SYSTEM WITH AN INFINITE ROPE
The winch is located at the start shown in figure 1. Thanks to the use of an endless rope, which is rewound using two reels (master and slave) and the system of rollers (pulleys) engine of the truck GAZ-51 (or GAZ-63), it can provide a simultaneous flights of 5-6 gliders BRO-11. Turns 60-70 flights per hour start time! The winch mechanism (Fig. 1), mounted on a special welded frame 5, is fixed to the vehicle chassis 1 and is connected to the transmission intermediate shaft 4 having the adapter 2. The shaft is rigidly fixed leading drum 7 Ø 360 mm, and above that is the clutch drum 6 of the same size. The system provides a maximum speed of endless rope 60-65 km/h at the second speed gear box of the car. The drums are welded of steel 4 mm thick (Fig. 4). On their outer surface has 20 sockets (cassettes), which are laid with wood blocks, planed from hard wood — oak, beech or maple. They provide good grip of the rope with the drum, eliminating the possibility of slippage and protecting it from premature wear. For proper operation of the winch, the set of overlays of oak can withstand up to 6 thousand runs.
Lower, leading drum is driven into rotation by the propeller shaft of the vehicle with which it connects once the car arrives on their own at the start. Endless cable Ø 5 mm and a length of 250 m is usually stored on the auxiliary drum, which at the ends has wheels and can be towed to a launch site on the tow behind a vehicle or manually (Fig. 3). Before operating the winch starter rope is wound on the drums working the eight. While the lower drum is 4 turns, and the top — 5 turns. Then the cable passes through the guide rollers of the support frame. The order of putting some of the cable and the circuit of the winding of the reels shown in figures 1 and 2. The chart shows that, except for the winch in the starting system there is a tensioner — “pyramid” (Fig. 5) lock follower (Fig. 1A and 7) and rollers (Fig. 6) fixed to the ground. 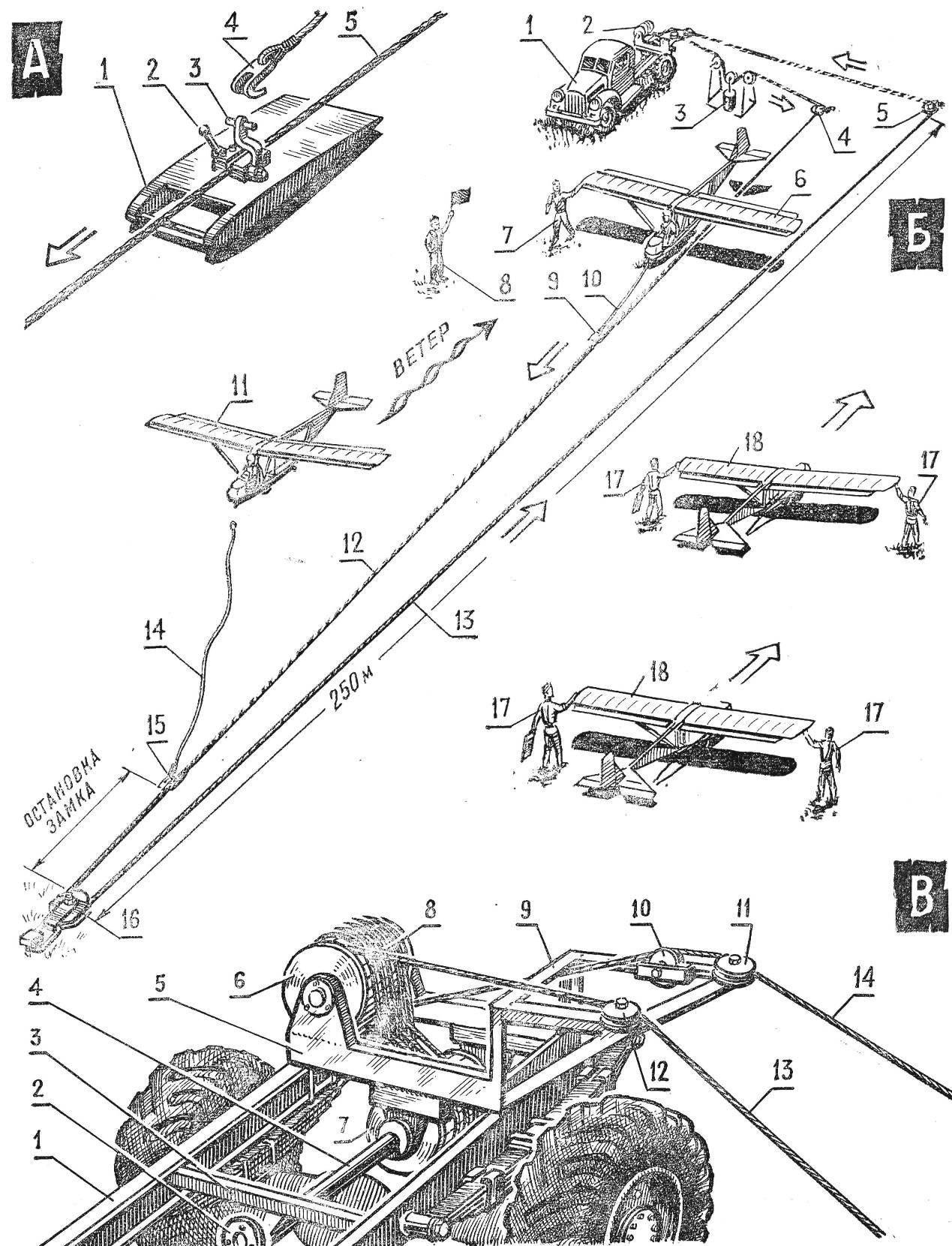 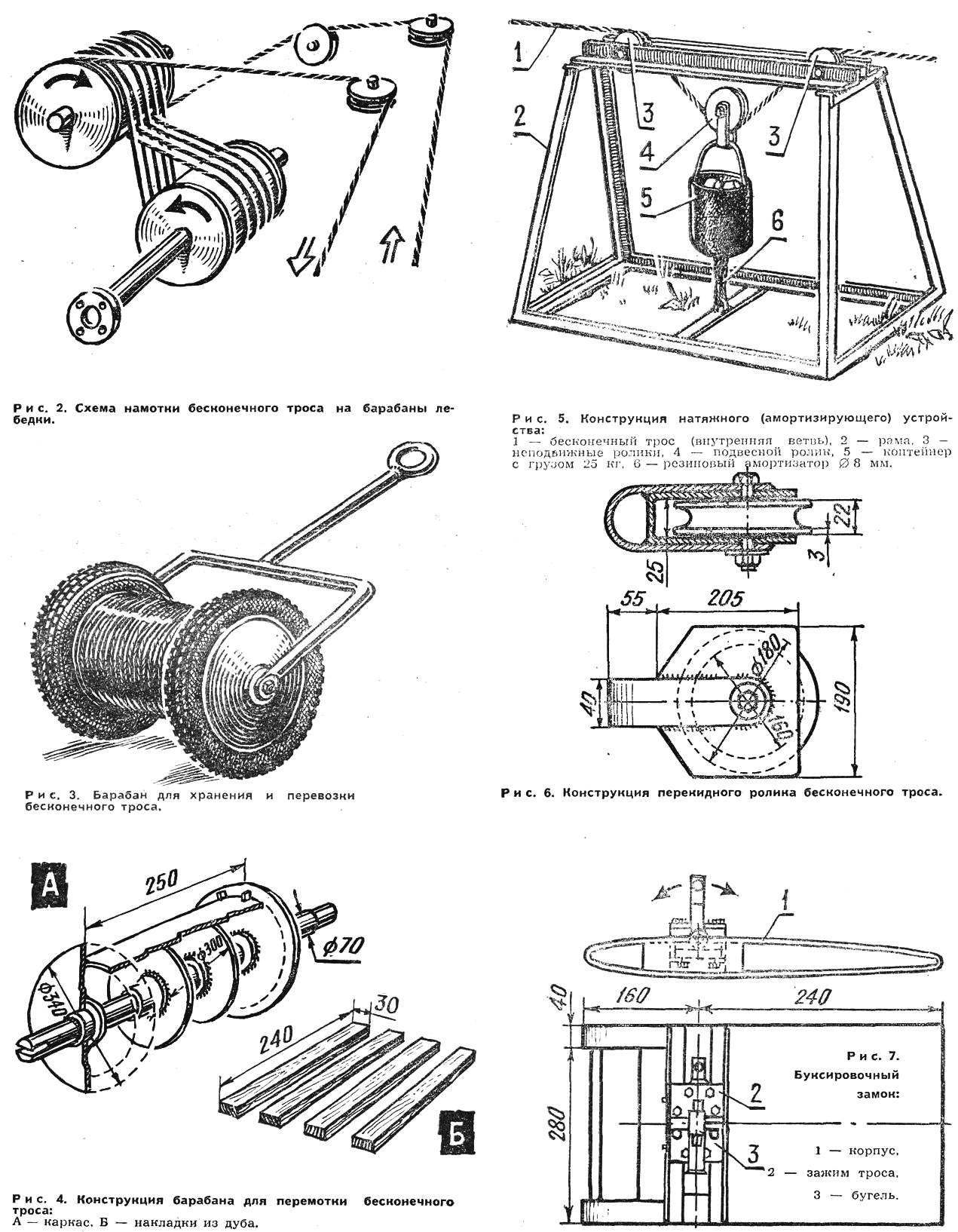 Figure 1 diagram of the starting equipment with a winch PLM-6 for many years used in Moscow UPS, providing flights at the height up to 10 m. the Height is determined by the length of the leash, making up approximately 0.7 of this value. As for initial training glider does not rise above 15 m, the length of the leash was made equal to 15 m. the traction Force directed along the cable, is transmitted to the airframe through the castle, made in the form of capture (Fig. 7), then through the leash and finally through the ring on the hook of the glider. Once traction is stopped the leash from the ring detaches from the glider, under the influence of the influencing forces of inertia. The leash is made of nylon halyard, it is convenient to operate, strong and durable. To the end of the leash, where the fortified ring attached cut file — the Rev limiter is 500 mm long with a carabiner on the end. It is involved in the transition from Jogging to a low approach at the first stage of training. For this carbine limiter is fixed on the working tether after getting the ring on the hook of the glider. After separation of the glider from the ground, the limiter is stretched and keeps the glider from further up. Thus, the height of the first of approach does not exceed 1 m, which is guaranteed to be secure. The flight of the glider should be strictly against the wind in the direction of the working rope. The gliders after landing return to the starting place in the side lane, it is possible to cling to the endless cable (the branch going in the opposite direction). The glider must be accompanied by two people. This organization provides a minimum flight time between two takeoffs in the range from 45 seconds to 1 minute. The best performance is achieved when at the start at the same time work 5 or 6 gliders. Hoist PLM-6 is simple in construction and reliable in operation. However, it should be remembered that the training flights it is allowed only to persons with official title of “instructor-glider”, rated in the system of DOSAAF. In addition, to teach flying in a glider BRO-11 with a winch PLM-6 is required in strict accordance with the “guidelines for organization of educational process in Junior gliding schools DOSAAF of the USSR” approved by the Central Committee of DOSAAF in 1974.