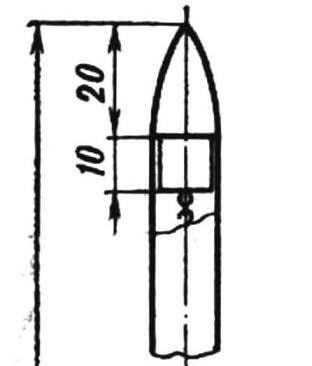 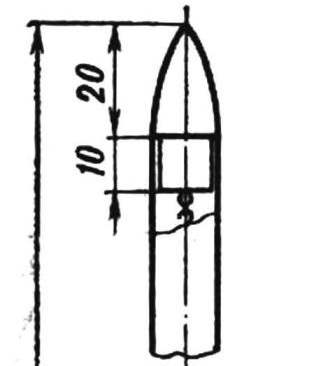 In the autumn of last year in Tashkent was held the second personal championship of the USSR on flying sport, which was attended by 53 athletes from almost all the Union republics of our country. According to the established tradition, the championship was played in three model grades — SE, S4D and Ѕ6А. The editorial Board appealed to the chief judge of competitions the master of sports V. S. ROZHKOV to comment on the results of the competition, to talk about the changes that are made to already existing design of rocket modeling championship winners — leading athletes of our country.
First of all about the winners of the championship. First prize winners in this steel V. Tarasov from Chelyabinsk (class Ѕ3А), A. Dalmatians from Tajikistan (class S4D) and Moskvich V. Kovalev (class B). It should be noted that the victory was given to the Champions in a hard and bitter struggle — in one of the competitions for each of the classes of rocket modeling not without additional rounds. And if the starts of classes and Ѕ3А Ѕ6А took only one additional round, in competition raketoplana (S4D) they had to carry three!
It should be noted that the championship allowed us to compare the engines of three types: serial and experienced domestic and manufactured in Bulgaria. Their characteristics were very similar, and failures of MRD at the start was much less than at the first championship. Of course, here said the experience has already been acquired by rakotomalala in the treatment of MRD.
Now the models with a parachute of the class Ѕ3А. First, a few words about the technical requirements. Start their weight should not exceed 100 g, the momentum of the engine — 2.5 n·s. the Maximum allowed flight time in the main stage — a 4 min. Flight depends on its duration.
The most attractive was the model of champion of the USSR Vladimir Tarasov. He’s one of the few used the case the minimum diameter is only slightly greater than the diameter of MRD (12.3 mm.) In such a cylinder section V. Tarasov managed also to put a parachute with a very large dome (800 mm)! Hence, the height of flight more than other models, and longer descent. The second advantage is particularly useful in the run when the weather tried to prevent athletes: colder, the wind picked up, and, of course, no “terms”. Interesting structure was the model of the athletes, mityureva and A. S. Ilyin: the hull of their rockets minimum diameter had a longitudinal connector. These characteristics could not affect the performance of performances, Mityurev A. won the silver medal, and S. Ilyin took the sixth place.
Speaking of raketoplana S4D, we note first of all that in them is, unfortunately, hard to find items technical search, its own design finds. Almost all participants spoke with a miniature hang gliders of the type “flying wing” and “duck”. And almost all models to varying degrees, copied raketoplana recognized leaders — members of the USSR team. But at first, this seems necessary, therefore, improving the techniques and tactics of participation in the competition. And yet, if the athlete focuses not only on today, we should look for new schemes to use their own technical solutions.
With the model rocket plane aircraft schemes in the championship were made by only one party — the Muscovite Vladimir Minakov. Wing it has two rocket plane of the fracture and can unfold along the fuselage, which reduces drag at takeoff. Well proved and established on the model of the machine forced landing. The launch mass of the rocket with MRD-20-10-4 around 100 G. unfortunately, V. Minakova managed to score only 1300 points and take only the seventh place.
The next class, which started in Tashkent — model S6A: rockets band parachute streamer, a flight which is estimated duration. The fact that the results in this class depend primarily on the tactical maturity of the athlete, the ability to navigate in weather conditions and to choose the right starting place. To a much lesser extent the evaluation flight is defined by structural features, as the leading rocket modelers have approached a kind of optimum: they all have a fiberglass hull with variable section — with the main part Ø 10 mm, tail — caliber engine. The same brake band streamers of Mylar film length 1000 — 1200 mm. Close and launch weight is about 17 g.
Among the models of this class the most interesting structure was the rocket champion of the USSR Moskvich V. Kovalev with a convertible body. The benefits of its application in that case halves creates additional resistance, decreasing rate of descent. Even if only slightly, but when the bill time comes for a second, a small excess windage could decide the outcome of the match.
Talking about finishing the last championship, about the models of prize-winners, I want to emphasize that you can improve even structurally, the established scheme of rocket modeling. This is demonstrated by the results of the championship, which was won not so much the experienced athletes, many designers with a strong creative approach to technology use in developing models of original, innovative solutions.
MODEL CLASS Ѕ6А champion of the USSR Vladimir KOVALEV
The wall thickness of the folding GRP model is 0.25 mm. the case of variable cross section, it is possible to shift the center of aerodynamic drag back and thereby to increase the stability of the flight. The housing halves are connected by a hinge, made of fiberglass and glued into the balsa fairing. The stabilizers of rockets — balsa plates with a thickness of 1 mm. For fixing the housing halves in the starting position provides a kind of lock — balsa boss, consisting of two parts glued to half of the body. Boss has a ledge on which the inner diameter is pushed the engine. After shooting MRD the lock is released, the body opens and unfolds streamer. 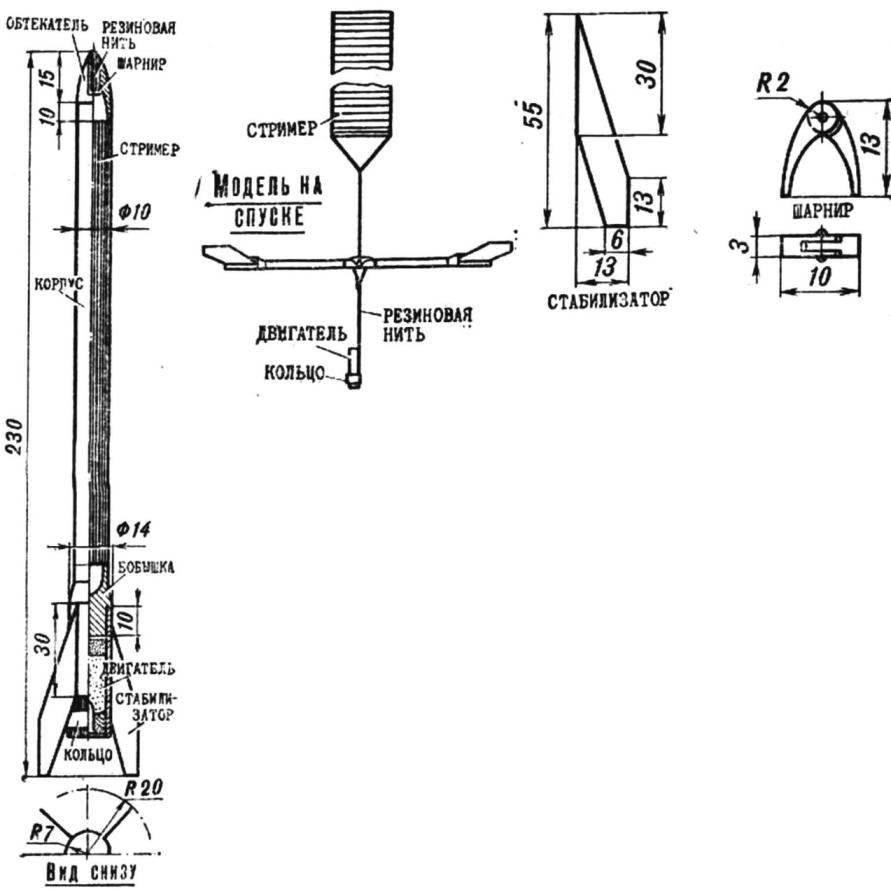 Brake band-a streamer cut from metallized Mylar film (120 X1200 mm) and folded like an accordion. To the head fairing tape suspended on a nylon thread length of 800 mm.
The model of this design is quite advanced, durable, it can be reused. Weight of model without motor — 7,5 g.
MODEL CLASS Ѕ3А champion of the USSR V. TARASOVA
Body of this model has a Ø 12.5 mm and length of 253 mm. the Material is a composition of fiberglass and epoxy resin. Stabilizers balsa plates with a thickness of 1 mm; the lateral surface is covered by epoxy resin. Of fiberglass and epoxy resin made of and guide rings — their internal Ø 3.5 mm. fairing of the rocket carved out of balsa.

The parachute is cut from the Mylar film. Depending on weather conditions, the model equips a parachute with a diameter of the dome from 600 to 800 mm.
The starting weight of the model is 20 g.
The CLASS MODEL S4D champion of the USSR A. DALMATINOVA
The design of the rocketplane of the winner of the championship is typical of the past contests — a glider with flexible deltakilo type “rogallo”. The Central beam of the airframe pine rail section 4X4 mm. In front of it with thread and glue attached to the spring hinge from a steel wire Ø 1 mm. To the same spring and the same way the dock side member of the pine slats of variable section.
On the Central beam (at a distance of 284 mm from the nose of the glider) is pivotally suspended rail-balancer fixed thereto balsa nose fairing. 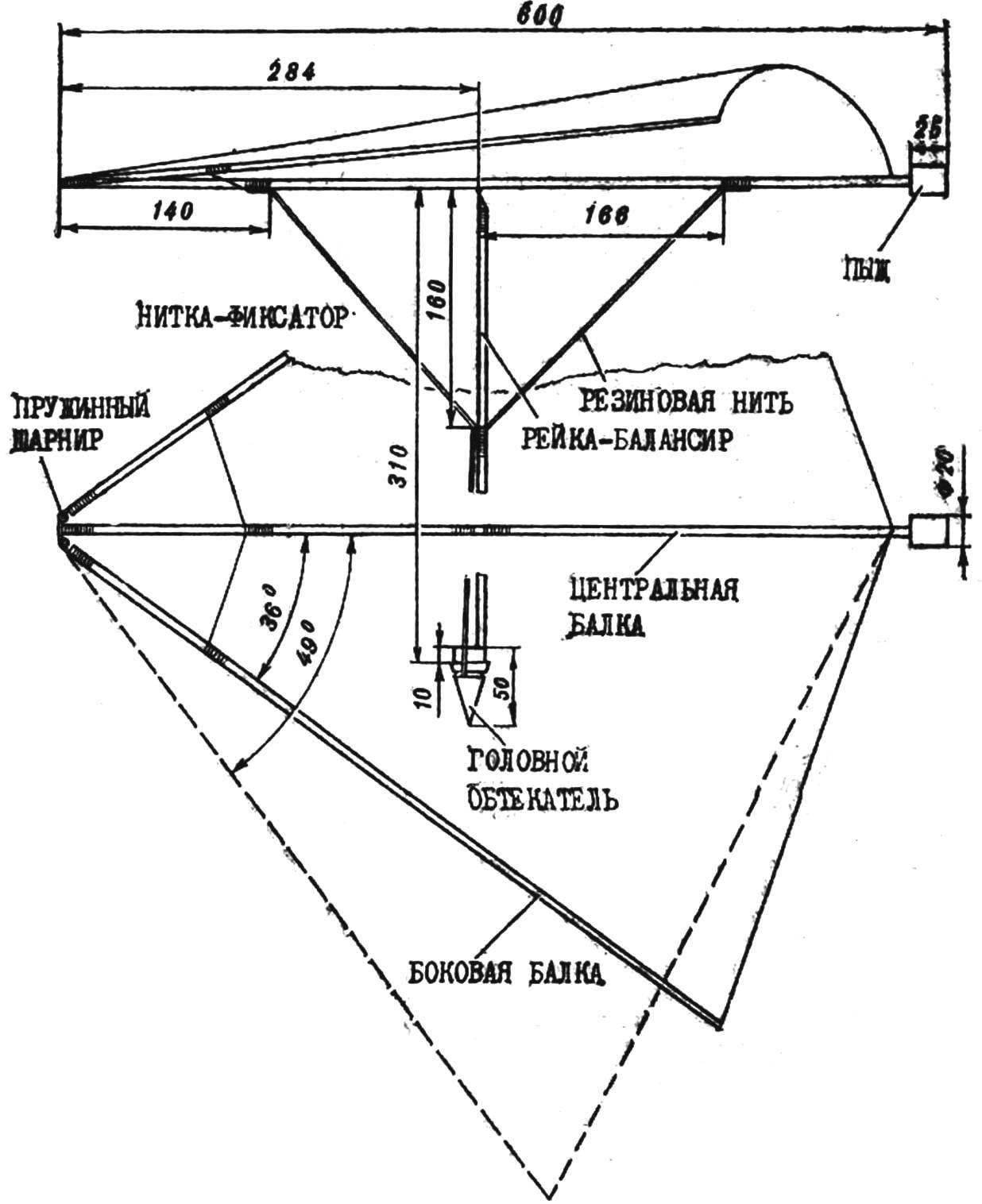 The sail of the airframe are cut from the Mylar film, the angle at the vertex (blank) — 98°. The mass of the rocket is 28 g.
Container (housing) of the rocket plane is laminated of fiberglass and epoxy resin. Stabilizers — balsa, with a thickness of 3 mm. Model equips a motor MRD-20-10-4.