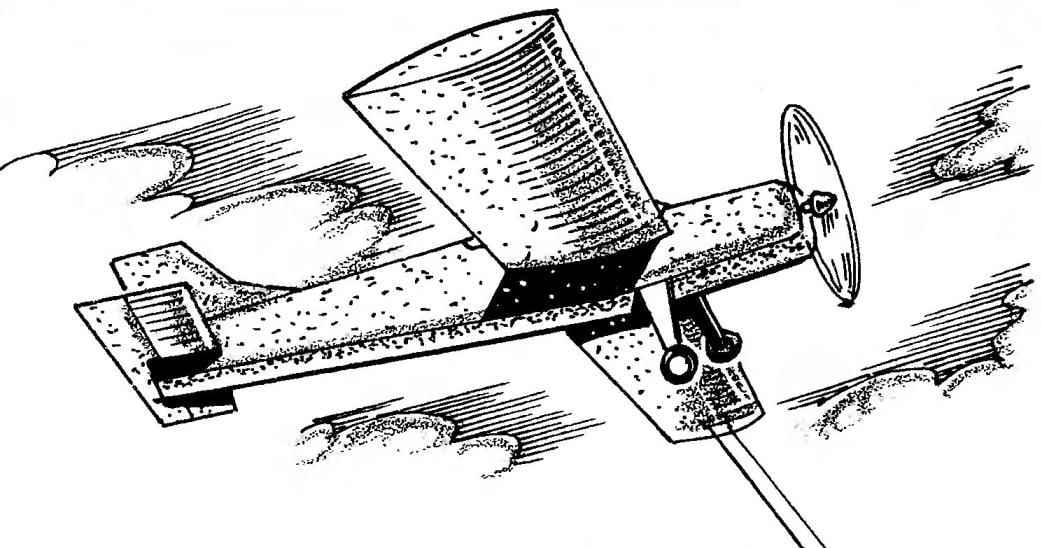 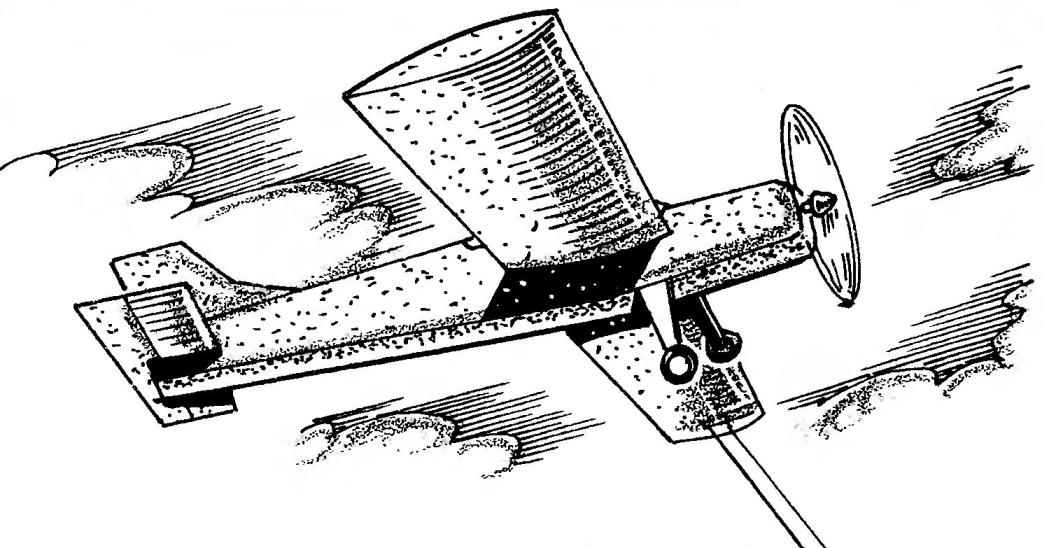 The emergence in recent years of powerful and light microelectrophoresis DC and bystrozamorozhennyh batteries that can withstand large load, made it possible to create flying models with electric drive. The undoubted advantage of these indoor models are ease of use; the ability to practice aerobatic maneuvers not only on the street but also in the gym all year round; low noise; no pollution of the environment.

Based on the experience gained in the activities of the laboratory of experimental design. the station of young technicians in the city of Kostroma, we have developed and successfully tested aerobatic control line model elektroleta intended for beginner modelers.

In its construction, inherent qualities such as simplicity, strength, low cost materials and low consumption, modern design, good maneuverability. The model can be quickly performed without using a complicated tool, so it is perfect for making in technical circles, and even in the classroom work in secondary schools.

As the main construction material for the fuselage, wing and stabilizer applied is quite affordable melkosortnyj packing foam, that has allowed to increase the flight weight of the model (with engine) up to 100 g.

The creation of a model starts with drawing a life-size drawing of cross-sections of the wing and stabilizer, as well as the manufacture of aluminum templates of the fuselage and sections of wing. 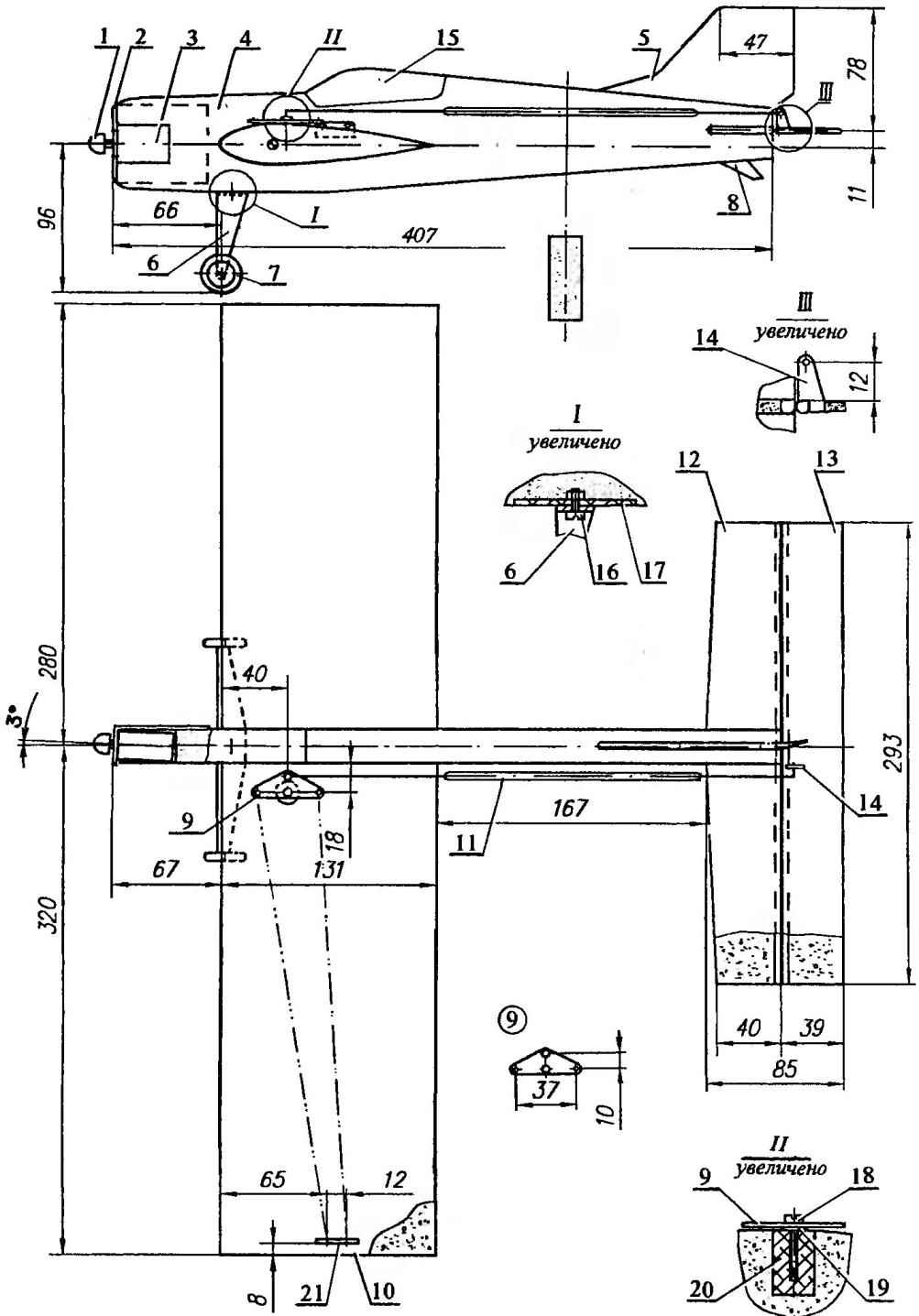 To process the foam is better way, many times published in the magazine and often used by modelers: with the help of Thermaltake consisting of a machine or luchkovoj saws, which is novotneho canvas stretched nichrome wire. The latter is connected to Lotro, using the empirically selected optimal temperature of its heating.

The technology formoobrazovanija wing is simple — to the ends of the foam block screws perevorachivayutsya dural templates, and then the “extra” foam is cut from a workpiece using Thermaltake.

After this treatment, the foam is covered with thin glassy crust. With some experience, the shell becomes smooth, however, to achieve this is not easy. Sometimes it’s easier after the cutting process the wing skin and to avoid distortions, to paste it directly on both sides of condenser paper on the glue PVA or CMC. Looks quite durable and elastic, which eliminates the need for spars.

The fuselage is advisable to paste over all sides of the paper. As a lantern is convenient to use the right part of plastic bottle. If this pick fails, you can cut out of timber the punch and the matrix, and squeeze the lantern from a flat workpiece of the plastic bottle.

Our experience has shown that the most suitable as power plants are miniature motors used in door locks of cars-cars. The engine is mounted on Motorama representing the area, from bent aluminum plate of 0.5 mm thickness with holes for the mounting screws and the motor shaft. On the fuselage engine mount fixed by glue BF-2.

The foam stabilizer and the Elevator reinforced edges is made of Linden slats. Hinge straps for the rudder is made from strips of nylon fabric.

Management system model — traditional design. Rocking chair, made of plastic, is hinged on the wing with a steel screw; the latter is fixed in a wooden tube 1 glued into the wing.

For elektroleta with a motor of comparatively small power of great importance is the selection of the propeller in accordance with its speed. For the manufacture of the propeller with optimum settings, we’ve created a special test stand that allowed us to determine the maximum traction power plant. This did not require any special instrumentation — all you can determine at a glance, visually, other things quite clearly.

In the simplest case, the model can be hung on the rubber threads of the air screw down after the engine is started, the thread is stretched in proportion to thrust. Mounting on the motor shaft screws with different pitch and diameter, you can choose the best. 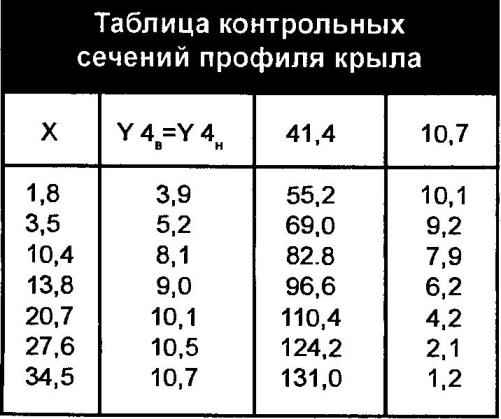 The table control section of the airfoil

Spring chassis model is made of hard duralumin sheet, wheel— of dense foam. The spring is fixed by the bolt and nut in a plywood plate, and that, in turn, glued to the fuselage.

Fully assembled electrolet spray painted by nitroenamel. Design elements can be made from self-adhesive color film.

For flights used a power supply consisting of batteries or a battery which is attached to the belt of the modeller. The control knob has a power switch.

Run elektroperedachi made on cords of insulated copper wire of length 8 m.