To the journal is receiving increasing numbers of letters from modelers who make their first steps in the class RC. And, as a rule, one request — publish a description of the glider or plane for the initial training. Increased attention to the units of this complex model aircraft class is clear — the domestic industry began to produce proportional radio control systems, and the achievements of modern radio electronics, in particular the emergence of new circuits, give the opportunity to build a good improvised equipment. Published drawings and a description of the “flying coach”, an interesting series of design solutions that allowed to create a universal multivariate training model. It is made entirely of domestic materials.

Comparison of various airfoils have shown that the best of all others for training models suitable Кlаrk-Y. One of the oldest profiles, proven on hundreds of devices, at low Re number provides good stall characteristics; at low speeds and wing chords its maximum quality and the maximum lift coefficient satisfy the highest requirements. Yes, and “resistance” against the inaccurate repetition of shape he is beyond praise. Why not just do it with modelers! Soft skin lobikov wing and rarely put the ribs into the profile’s “antiradicalism” and still these models fly well.

The wing shape in the plan initially chose rectangular, without restriction — it promised a simplification in the manufacture and Assembly of the frame. However, the portrayal of the bevel at the end of the trailing edge gave an interesting effect, not to mention the significant improvement in appearance. It turns out, while maintaining constant shape of the top profile on the scope, you can modify them on the bottom of the last three ribs behind the spar. The result is a simple Assembly of a complicated form in terms of the wing and a great anti-spin characteristics. This is caused by the resulting so-called aerodynamic and geometric twist, in which due to profile changes and reduce the angle of attack of the end sections of the wing stall at slower speed occurs at the root sections. In critical situations, such a model will only lower the nose and again gaining speed, and not fall into a tailspin. High anti-spin characteristics — the essential apparatus that flying hand, not yet accustomed to the toggle switches of the transmitter.
It is interesting and flaps-ailerons. Represents a simple plate, they are, though not run through the whole scale, is still quite effective due to the developed area. Freed from the ailerons to the wing tips serve to improve anti-spin properties. Recommended flaps-ailerons set even if the instrument is a machine for their control are not provided. After completing the device that regulates the mounting angle of the plates (they can be a threaded rod passing through plastered on the fuselage or wing nuts), you will get rid of a lot of trouble when debugging. 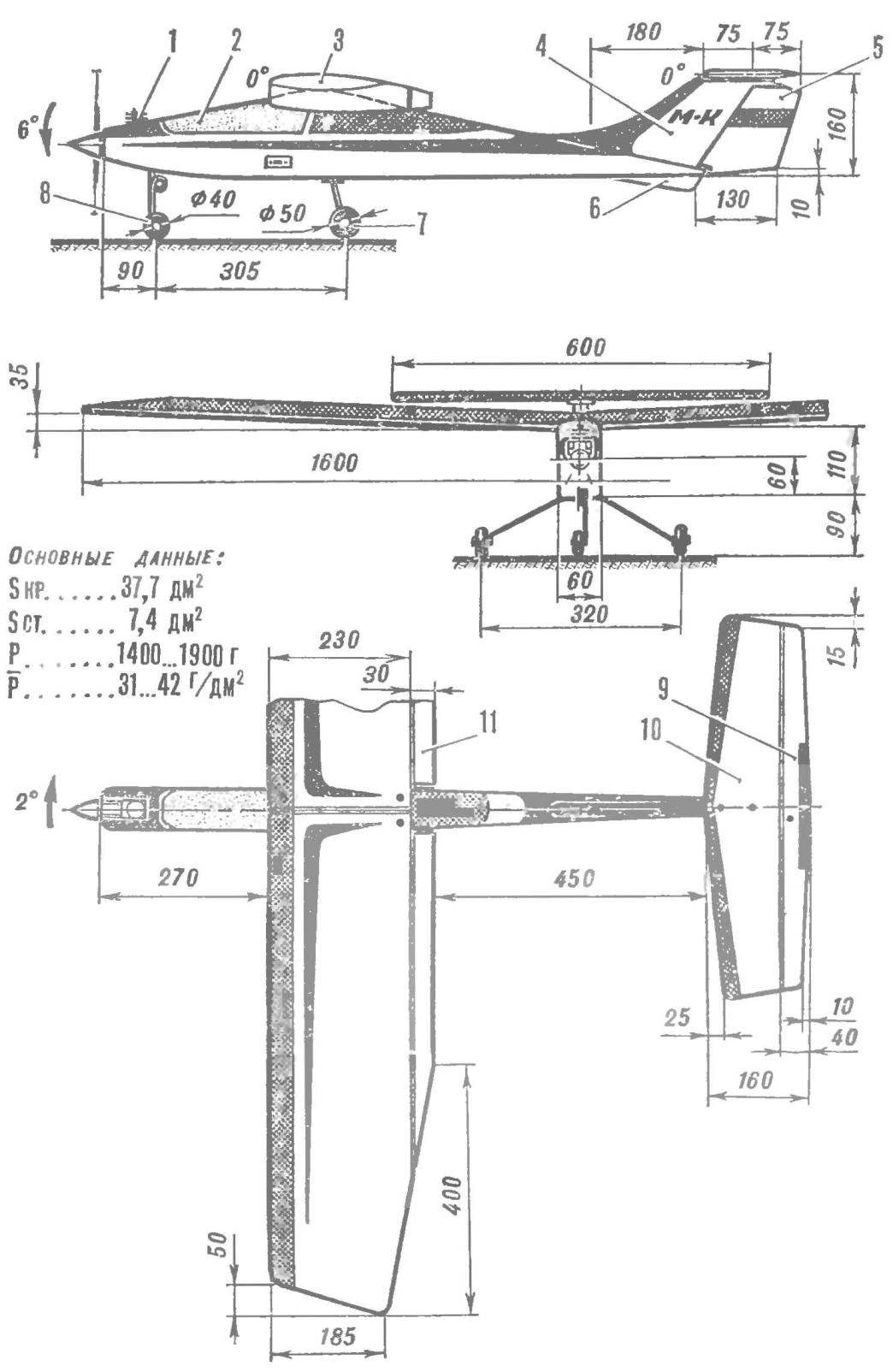 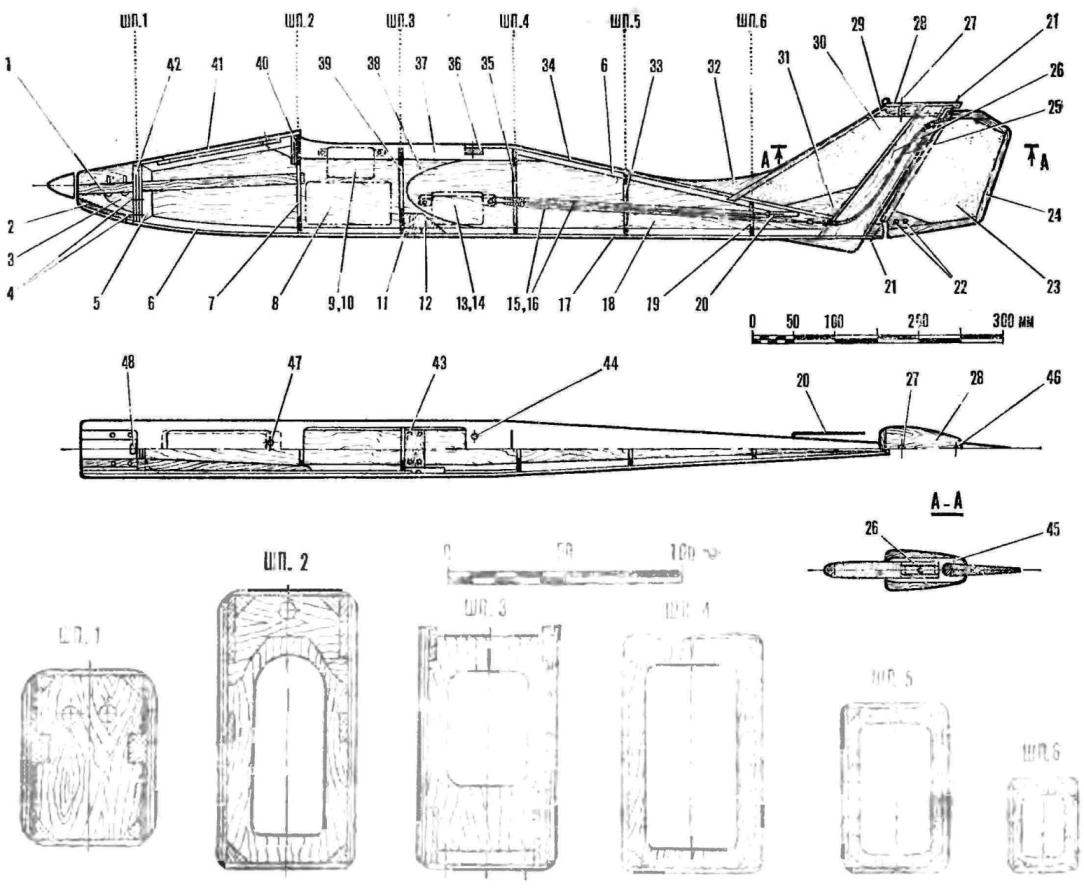 Fig. 3. The design of the fuselage is lightweight under engine working volume of 2.5 cm3 control only rudder and Elevator. 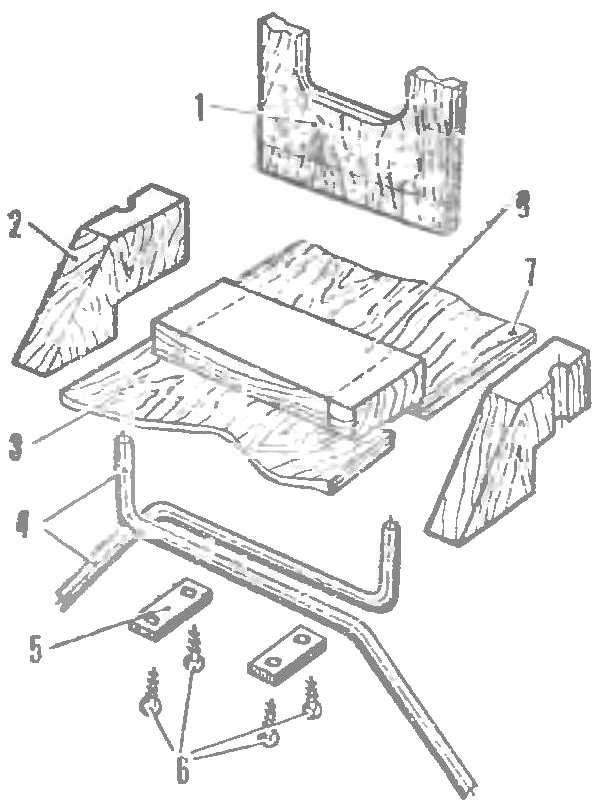 R and S. 4. Mount the main landing gear:
1 — third frame, 2 — solitaire node 3 — the back part of the lower skin of the fuselage, 4 — landing gear (wire OVS Ø3. 5 mm), 5 — plate (steel 1,5 mm), 6 — screws, 7 — the front part of the lower skin of the fuselage, 8 — pad site.
And the wing area will remain the same. And on the debugged machine adjustable flaps will help to transform it at will in heaven “the slug”, it is fast, stable even in strong wind model. Those who feel with the training completely “you” can be recommended, increasing the relative area of the Elevator, to combine it management with the operation of the flaps similar to Cordova “the acrobat”. This way you will significantly increase the aerobatic properties in General napolotano model. Conducting a similar experiment, debug management, to the corners of the flap-Aileron was approximately one-third of the deflection angles of the Elevator. In the future try to change this ratio, bringing together the values of the angles.
For К0нструкции wing RC is a simple, lightweight maximum scheme. Working on it is better to start with the manufacture of the ribs. After collecting a cut from the allowance of the workpiece and pulling them with the screws between the metal profile templates, treat packs and saw the grooves for the shelves of the spar and edges. Then disassemble the packs, number the items in the order they were placed during processing. Lighten rib, modify the terminal and follow the additional grooves for strengthening of edges and the spar. Use the templates again and saw out with their help nasal polonaruwa.
Krastev in the template at the desired edge angle and beam flange, PCONSOLE assemble the wing on a flat Board bench (all the slats of the longitudinal set are joined only “on condition”, the best is to steam the middle of each of passing across the span of the slats and dry them in the template). It should be noted that the split wing with two consoles is heavier by almost 100 GS, and it is highly desirable for the educational model.
Ready to frame vyshkurivaetsya, installed the missing nodes ending. After that you can sheathe both sides of the forehead, a double-layered sheet of drawing paper, glued together with epoxy resin. Of course, such material is not of the easiest. It is two times heavier than the classic two-millimeter skin of balsa, but at the same time is half the size of plywood thickness of 1 mm. If other elements of the design models obtained are massive, it is better to leave the wing with a soft coating Mylar film with palackianae on top of amalite macalintal paper. The latter not only will give the surface the desired roughness of the consoles, but also increase their torsional rigidity.
Note the drive system of the flap-ailerons. As shown, such meghrashen nodes fully protects the elements of the frame and servos if the alarm reset wing when cut nylon M4 screws securing the rear edge.
The fuselage is of rectangular section with working plywood covering. When drawing the special attention was paid not only to reduce its mass, but also manufacturability, allows you to build a good fuselage even in unsuitable home. Please note — almost all the lines formed by completely straight lines, with the exception of a short section of the bottom of the bow, and the sides are parallel to each other. This solution allows to increase the accuracy of manufacturing of the patterns of skins. After the recess the plywood blades with a ruler is much more accurate than cutting out a jigsaw, requiring subsequent filing of the edges. Improved connectivity of individual parts will increase the strength of the entire frame, therefore, the fuselage will be possible to save a lot of weight on the adhesive seams. Lower valance flat adopted not only for reasons of aesthetics. First of all it is the base on which elementary exhibited the set. Yes on a ready model, the same base will allow the most precise way to set the wing and stabilizer without using any additional measuring devices, supports, brackets.
The fuselage does not require special explanation, it is only necessary to note that the thickness of the sidewalls from the rear edge of the wing should be gradually reduced. The tail is two layers of three-layer millimeter plywood.
The tail unit made by T-scheme. Although it causes increase of mass of the keel carrying a stabilizer for training a model can be considered more preferable. The fact is that emergency landings are not uncommon when flying with beginners, a T-tail stabilizer protects, provided that the model meets the ground, at least not up wheels. While such a scheme reduces the likelihood of the stabilizer in the vortex trail of the wing. Mount the horizontal stabilizer nylon screw, cut away at excess loads, in large measure, protects the stabilizer from damage.
The basic version of the training of radio-controlled models are based on the use of domestic equipment radio “Suprana-82” with four steering servos and motor “rainbow” glow variant working volume of 7 cm3. The capacity of the fuel tank for that motor should be at least 150 см8, according to the scheme he introduced on aerobatic models (see “M-K” № 1, 1983). If you debug the actions of the servos make when fully withdrawn to its outermost position the rods of the respective rudder is deflected to the corners of the: rudder ±25° Elevator ±15 ‘, the ailerons ±20°, lever controlled carb should not become a PA focus to extreme positions. In the version with the “Rainbow” is the mass of the model can be equal to 1900, then its takeoff and landing characteristics allow it to start even with the hands. 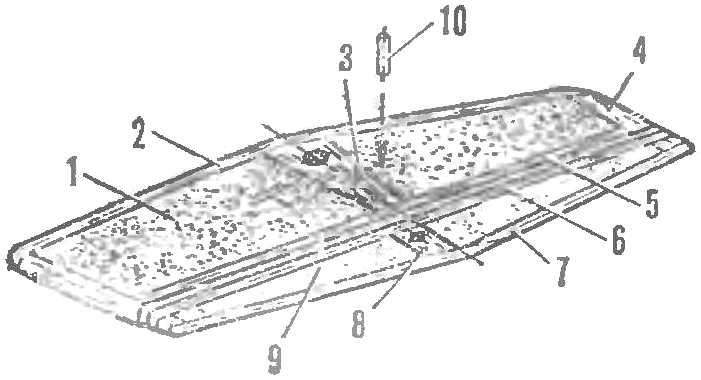 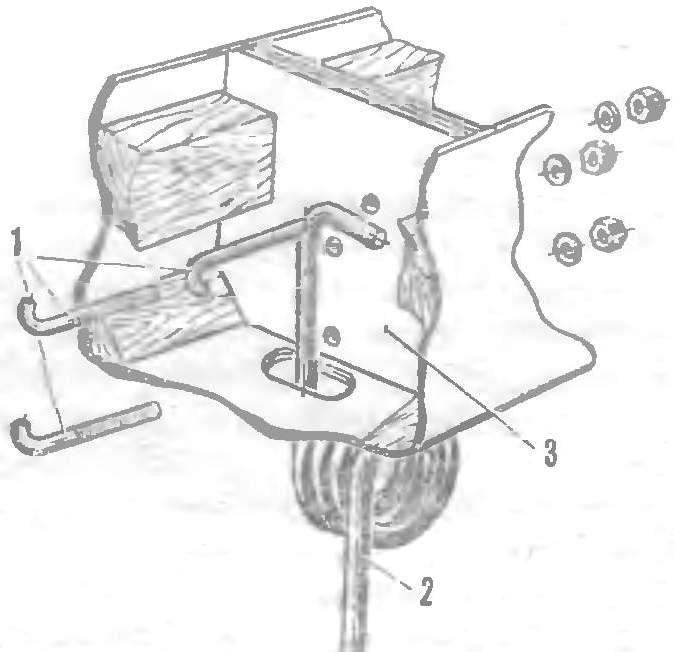 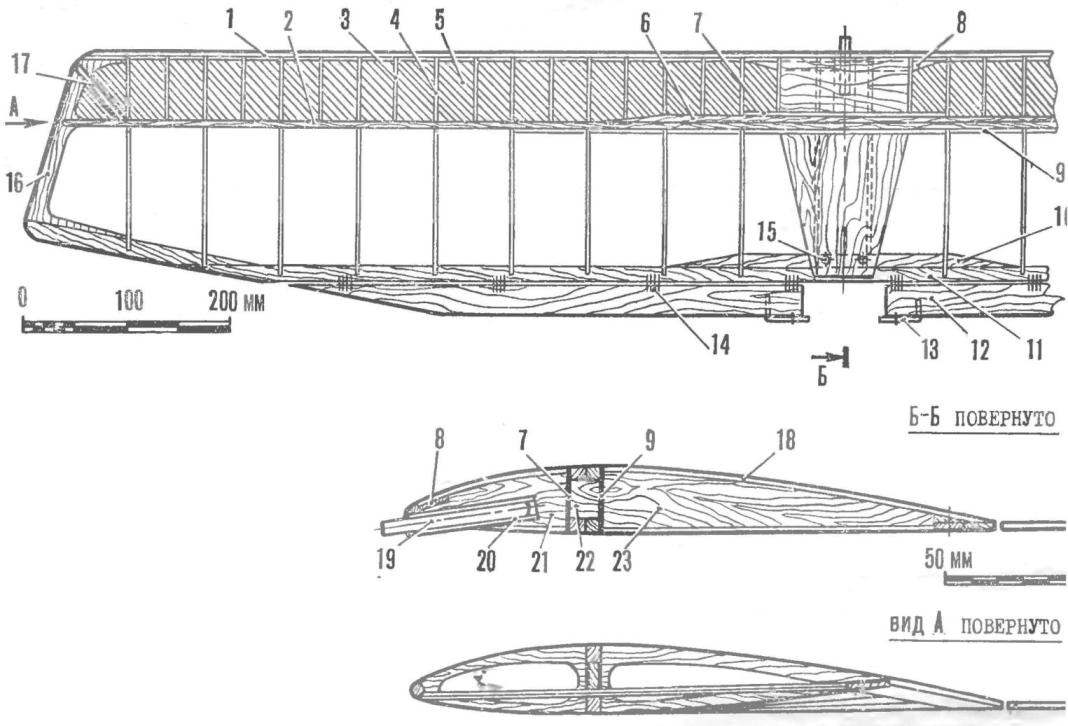 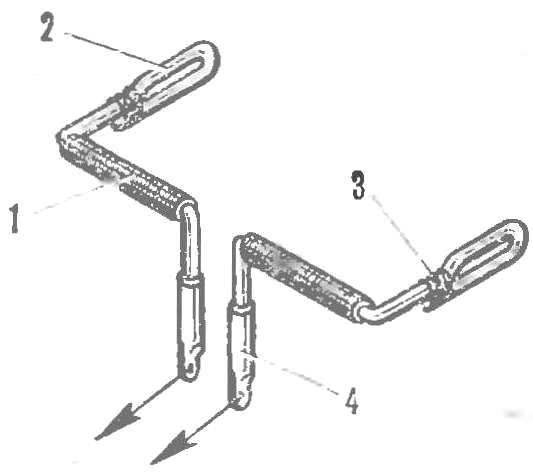 R and p. 8. The intermediate node of the control flaps-ailerons:
1 — tube-hinge (copper, wrap the threads with glue and set under the fuselage skin close to the part 36, Fig. 2), 2 — kavacik (OVS wire Ø 2 mm), 3 — winding copper wire (soldering), 4 — termination pig (copper tube, solder the end to flatten).
In the drawings is shown another modification, significantly lightweight compared to the first. The reduced weight of the model flies well with compression Microdrive KMD-2,5.
The volume of the fuel tank may be reduced to 80 cm3, with a view to further simplification of the apparatus, as it has only two servos: Elevator drive and rudder (the latter can be combined with active ailerons or completely go to manage, zakoniv the rudder in the neutral position). The main structural change of the simplified method are as follows.
Section stringers of the fuselage is made rectangular in contrast to the triangle on the main option. This, taking into account the lower power of the engine, more than two times to reduce the area of the plywood skin of the fuselage, to get rid of the additional reinforcement sheet of plywood, leaving a single trim until the bow, use one and a half times thinner plywood on the frames. The transition to a diagram of the chassis without the nose gear, the lower sections of the slats of the bed wing and the engine mounts will also give a considerable gain in weight. Nebritymi the remaining sections of the frame of the fuselage upholstered the same as the wing (it is, of course, has in this embodiment, the rigid skin of the forehead) Mylar film with prillerova top macalintal paper. Kiel, who became stacked, designed like a new version of the stabilizer. Lightweight tail section of the model compensates for the decrease in the mass of the bow, carrying the lightweight engine, the additional alignment of the device is almost not required.
As it turned out, the flights on this model, with minor specific strain, allow you to perform even the rapid ascending maneuvers without losing speed. The only disadvantage of this modification is increased sensitivity to strong wind, is due to the lower load and speed of flight. In good weather, great flying otopleniya modification with a low-power engine working volume of 1.5 cm 3. Here, the landing gear is better to completely abolish, replacing light wire “ski”.
D. ALEKSEEV, the master of sports of the USSR