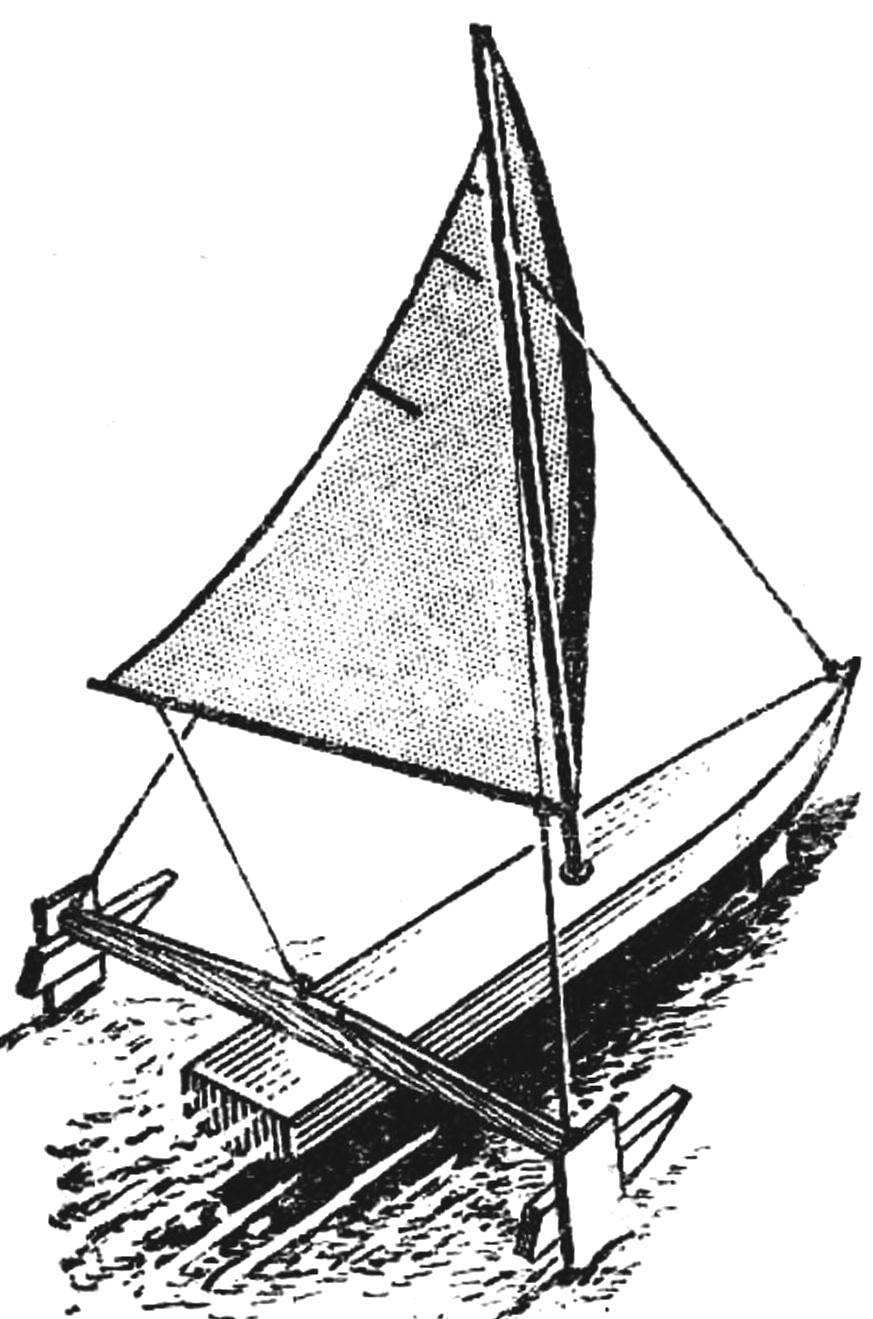 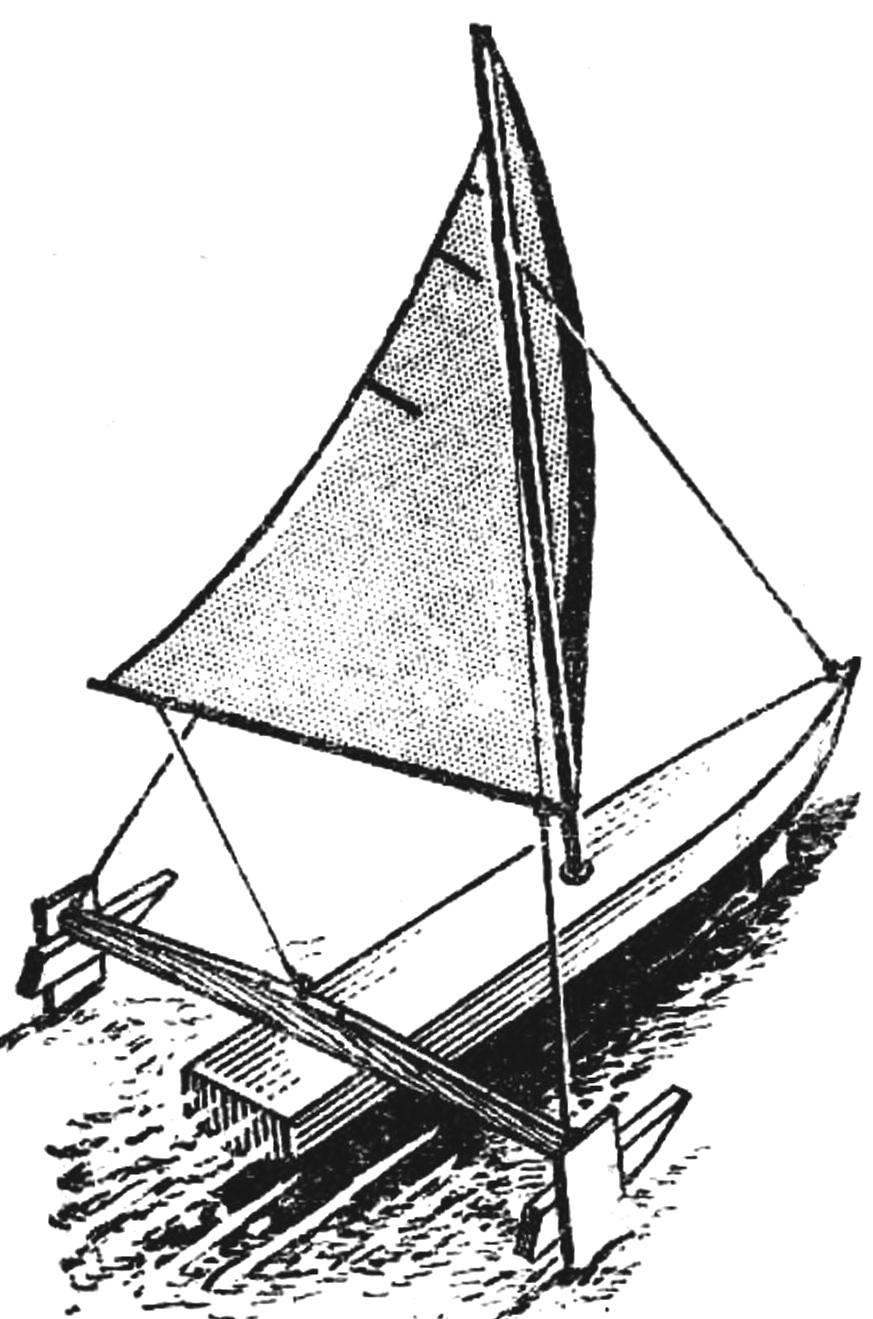 What boats will not meet the competition. Some amaze with perfection of outline and finish, it seems that it is better not come up, ke will. Others want to pick up and “bring to mind”. But this, though done really skillfully, carefully and conscientiously, initially produces a strange impression. A small case with a nearly rectangular frames, a transverse rail with ridiculously small floats. Whether clumsy trimaran, whether the model is a replica…
But rose gentle breeze, and the clumsy craft slowly went. And suddenly, before our eyes, it accelerates quickly. In a minute hardly recognize you in leaving at high speed, easily and almost without waves-a moustache, a rapid model-bird disappeared “ugly duckling”. Although the distance was decent, still visible as raised above the water body with a cross. But that’s not gliding, that’s flying! Real flight over the area of the hydrofoil, which finally became visible. Revealed the idea of the designer — the small size of the hull and floats facilitate “flight” of a sailboat.
To make this model very easy. It is important not only permaglide her. Then she will be able even with a light wind to overtake many of the normal displacement microage.
If you decide to build a similar boat, let’s get to it. Let’s start with housing. The easiest option is to cut it from a piece of packaging foam and sheathing from the top millimeter plywood, which shot one of the three layers. The joints of sheets of a covering pasted to the linen tape, the entire case is handled by the skin, puttied and painted.
Before gluing the foam with plywood to place in the hull three wooden pillars — they will allow you to securely mount the mast and the beam-the cross member during Assembly.
If a suitable piece of foam and thin plywood could not be found, make the case with the usual set (frames — plywood 3 mm thick, the stringers of pine slats 4X4 mm) sheathed thick cardboard. Closely related to the decoration and colouring, to securely prevent the cardboard from soaking.
Cork or foam cut supports floats and cover them with cardboard or thin plywood. After coloring they stick to lacquered tie bar carved from lime wood thickness is 7 mm. On the body of this node attach only after setting all the plates of wings, otherwise then they are difficult to align relative to each other. 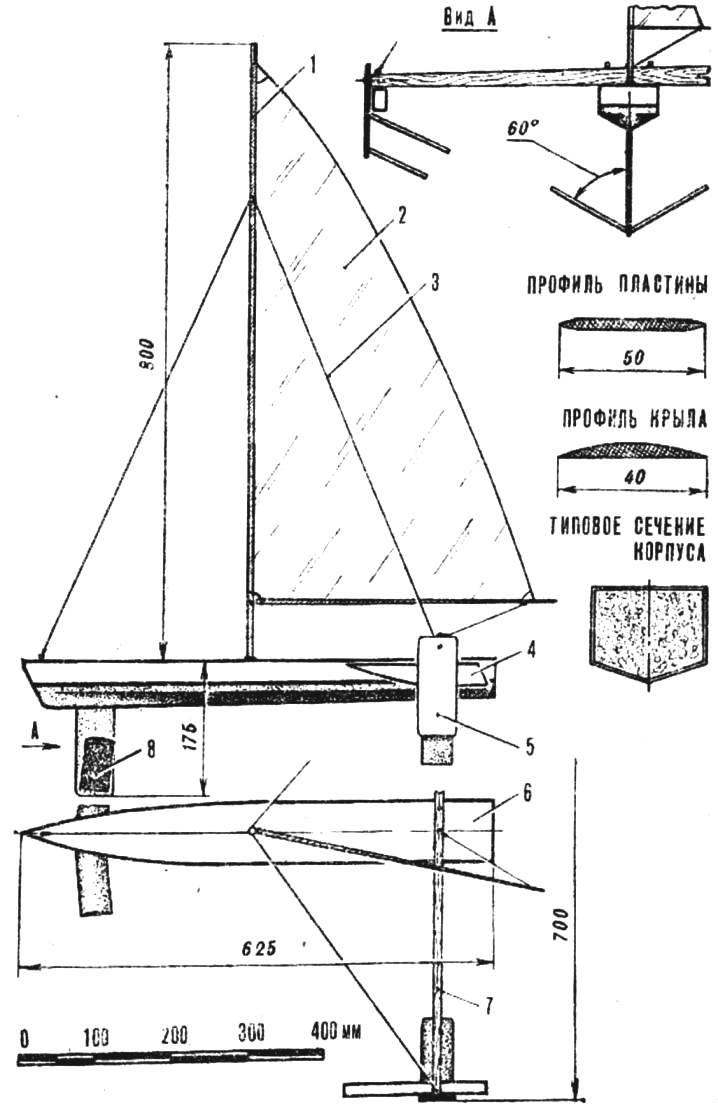 Model yachts hydrofoil:
1 — mast 2 — sail, 3 — guy, 4 — float, 5 — rear wing node, 6 — housing, 7 — transverse beam 8 — front wing site.
All the vertical plates out of plywood with a thickness of 3 mm, their front and rear edges are sharp. Wings of the same material, but the profile of them is not symmetrical, as in the plates and PLANO-convex, and the shape of the top profile is performed along the arc of a circle.
For Assembly of the wings better to use epoxy resin. During this operation until the angle of attack of the front wings was equal to 5°. Job mount on the crossmember so the angle can be adjusted, or seal them tightly at an angle of 2°. From the front all the supporting plane of the wings form a surface water angle of 40°.
This arrangement of planes is more profitable compared to the horizontal. The fact that after the dissolution of the yacht the wings remain under water only at a depth below the mass of the model over water was kept lifting force of the submerged areas; the other will not create excessive hydrodynamic resistance. The benefits will manifest themselves in strong crosswinds, when automatically changing the depth of immersion of the right or left of the rear wings will create a torque offsetting the roll of the boat.
The boat mast of a pine, fastened to the frame with stretched nylon lines-vant. The sail is made of polyethylene or Mylar film, covered on the contour of the tape-skochem. Finished hardwood parts and components are coated with oil paint — it will better protect the components from water than nitroenamels.
In conclusion, I would like to appeal to those who really want to do yacht hydrofoil. Try to install on this model, easy one-channel radio control equipment. Drive to the sail normal, but to change the course better to not use a traditional steering wheel and pivoting front wing site.