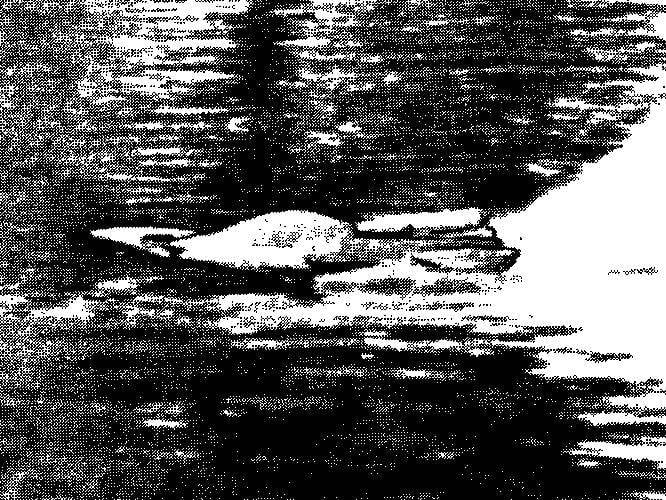 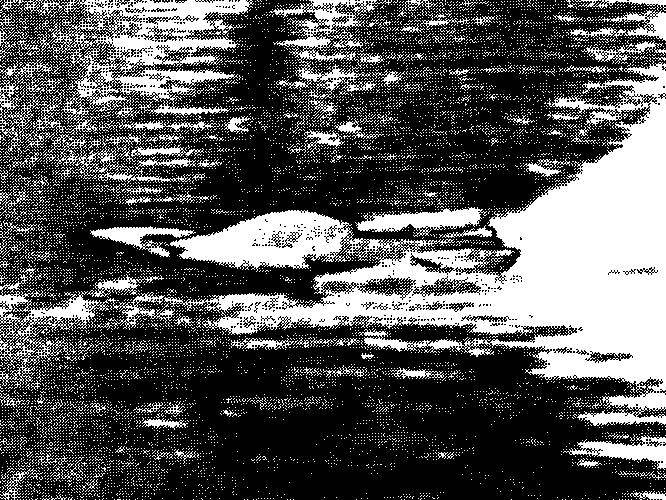 Barely born, the new ship class FSR-H (hydro), designed for a group race for the simple distance, immediately attracted the attention of the athletes of all countries. A broad range of search capabilities of the scheme, not trapped in the strict confines of the technical requirements, availability of manufacturing relatively simple models and the relative simplicity of the “pilot” RC airboats — all this was only in favor of the appeal of the new class.

Our magazine immediately with the advent of “hydras” (so with a light hand modelers began to call such devices) introduced modelers with the terms of the competition and the first samples of sports equipment. It’s been a few years… What are the “Hydra” today! After a period of initial exploration has been, began to show a professional level of design.

First we present to your attention a rather unusual model of the class FSR-H 3,5-created Czechoslovak athlete, master of sports V. Dvorak. The magazine “Modelarz”, which was published the drawings radiometer, presented as an adherent of unconventional technical solutions and constantly search of the best schemes. Do note that the created by Foot, boat catamaran tunnel type is not the only one; a similar machine, although not as often, can be found on the competitions of a various rank up to the world Championships.
This boat is a further development of the model with which we have acquainted the readers-modelers in the “M-K” № 8, 1987. Compared to the boat-“type” has a new improved driving performance. Steering with the rotating shaft of the propeller made the model much more maneuverable. A tunnel scheme gave the hydroplane properties such as increased stability in curves and a higher acceleration. 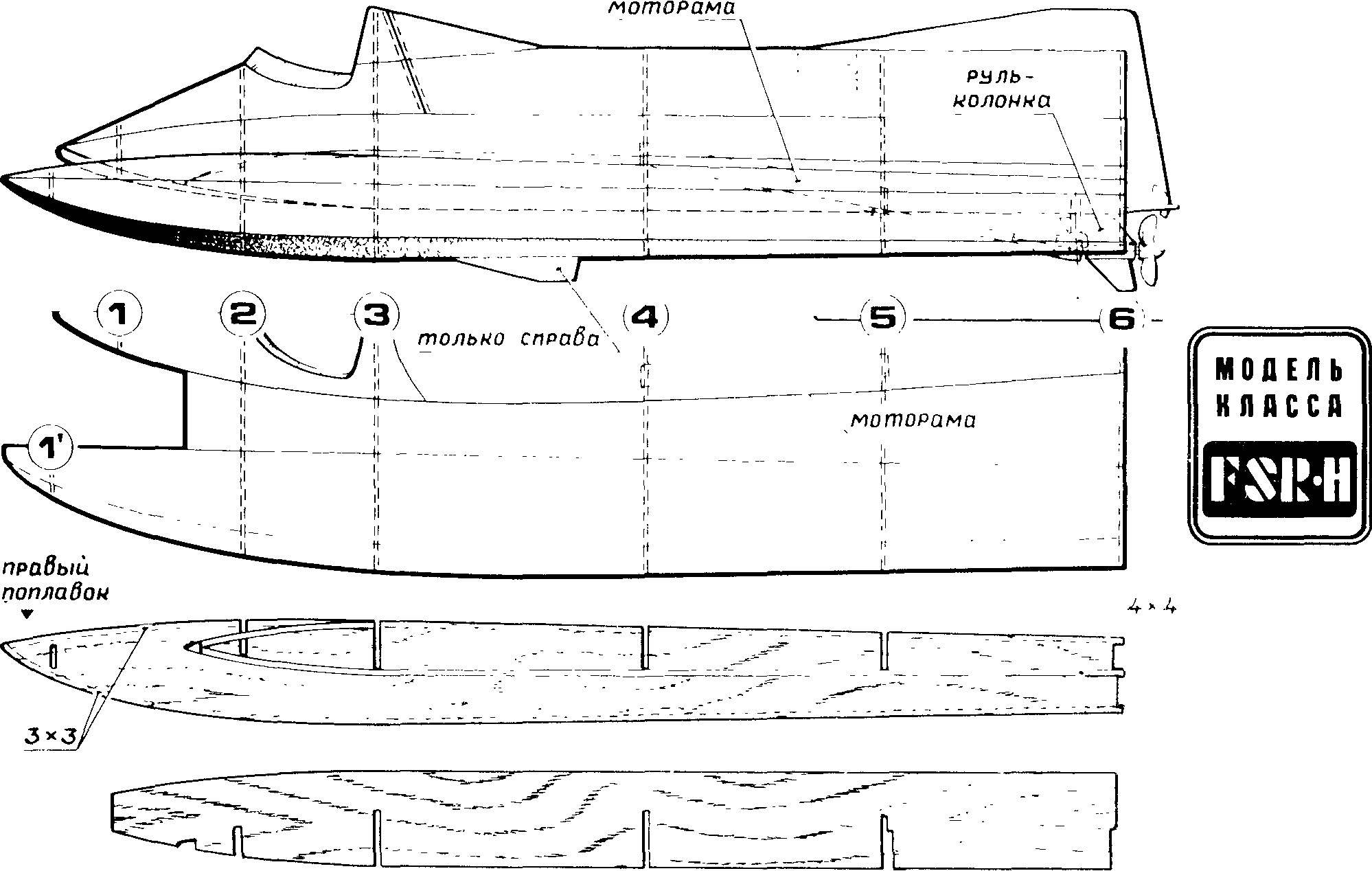 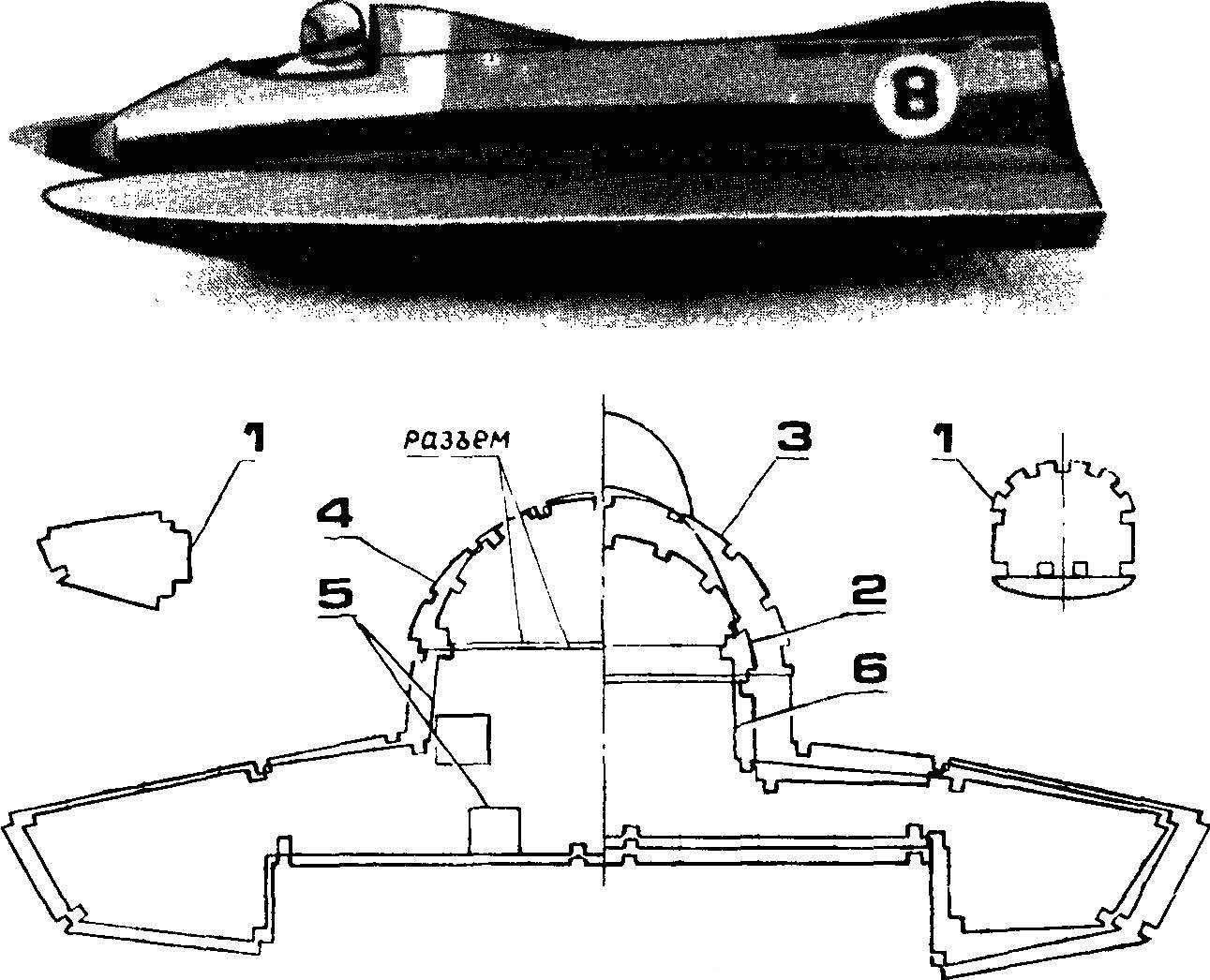 The model with the engine a working volume of 3.5 cm3 Czech athlete. Below shows the pattern side of the float with superimposed stringers and the pattern side of the Central building. Overall length of about 740 mm. to the Right shows the template frames.
On models equipped with the engine MVVS-3.5 mm with a reducer with gear ratio 1:1.68 m (gear 16 and 28 teeth, module 1). A homemade propeller, three-blade, Ø 45 mm. control Equipment — dual channel.
By construction, planing simple and easy to reproduce without the use of special rigging. All the parts of the sidewalls of the hull and floats are cut out of plywood with a thickness of 1,5 mm. Of the same material and frames made of a set of cross, except for SHP. 6, having a thickness of 3 mm. the housing Assembly consists of gluing to the sides of the stringers cross-section of 3X3 and 4X4 mm (pine; binder for the entire Assembly — epoxy), subsequent installation and control of the relative position of the frames and sidewalls and the final pouring of the joints with resin. After viskazivaniya the received frame, he doosselaere sheets of plywood with a thickness of 1.2 to 1.5 mm. the inside of the hull and floats varnished thinned “epoxy”.
Before the end of the finish of the Cabinet it is mounted the propeller shaft in deadwood and the fuel tank has a volume of about 200 cm3, is adapted to the riding conditions at the oval trajectory in the direction of the clock. You must also mount and beech bars motor. On this model the engine was placed nodes, comprising blocks of silicone rubber. In conclusion, most of the free volume of the casing is filled with self-foaming or regular foam. The entire surface of the boat is glued with fiberglass average thickness, polished and stained by known technologies.
Receiver, power equipment and steering wheel-car control gas engine, is placed in front of the engine compartment between the frames 3 and 4. Cover — Plexiglas 3 mm thick, the connector is sealed with a sheet of spongy rubber. The other actuator of the instrument is placed between the frames 5 and 6 and serves to control the position of the propeller of the propeller shaft.
The second design relates to sports “superskirama” intended for participation in competitions of the highest rank. Its Creator — renowned expert in ship modeling class, “hydro”, the Italian Gino Alongi — elected to build the most popular among athletes today, the diagram with two front spaced floats. In favor of the correctness of the choice says a number of major successes in the Championships of Italy and the world.
The basis of this model belonging to the class FSR-H to 7.5, fiberglass is the Central building. The use of this material is mainly caused a decrease in the mass of the glider to 2.7 kg vs 3.5 kg in the model of the same athlete in 1987. Along with the case is made and the fairing of the plant (the cap is then separated). But one power bulkhead, Vileika mounted yet only a few fungi threaded for the mounting of the motor and feed mechanics. 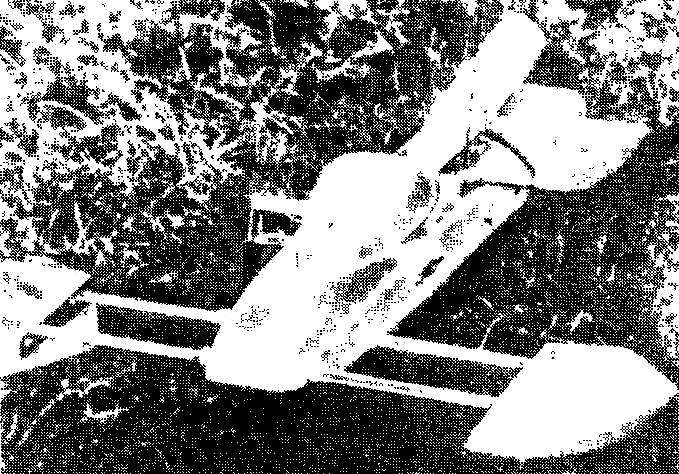 The model with the engine a working volume of 7.5 cm3 Italian athlete. Overall length of about 1000 mm. the Drawings prepared by the magazine “ECO model”, Italy.
The floats are carved from foam and covered the outside with plastic sheet after mounting of the attachment. All floats are adjustable, there is a possibility to change their angle of attack depending on the state of the surface waters. Front connected metal tubes-beams within the hull. Noteworthy profiling of the bottom of the case: to frame a small bump with a flat section, then plane with a broad, open from below, mine for posting deadwood.
The basis of the plant is a glow engine OPS-7,5 with a resonant exhaust pipe, resulting in rotation of the propeller with a diameter of about 60 mm and a step 87-91 mm. Reducer does not apply; working 22-24 thousand revolutions per minute with said propellers company “Acture”. Power of engine fuel under pressure, and the original system of tanks including the main volume of 240 cm3 and extra (supplies) value 15-30 cm3.
The engine is placed in the cast engine mount, which is through the elastic knots with rubber blocks 15X15 mm is hung on M4 screws on the sides of the hull. Ventilation matousek and the provision of a carburetor air — through small Windows in the hood and through the gap around the pipe of the exhaust pipe.
Instrument control with three actuators (supplied on a single charge of the metal “u”profile): steering, carburetor, and optionally, the “needle” carb. Oval window in the hull for Vileika approach to the instrument and to the host of the height adjustment of the propeller shaft in front of the startups are stuck with special adhesive tape.
With Ø 9 mm carb and fuel with 10-20% nitromethane model of speed crosses the barrier of 100 km/h. the Same apparatus is used in the classroom 3.5 cm3. The mass of such machines is in the range of 1600-1700 g Engine OPS with screw step 70-75 mm works on 26-27 thousand rpm.
It should be noted the desire of the designer to improve even a very successful model. In some versions it was studied the influence of “spoilers” (aerodynamic spoiler creates pressure to water) mounted on the front beam of the floats. In other cases, close to the bow of the hull additionally attaches similarity of floats that have addressed aircraft profile. 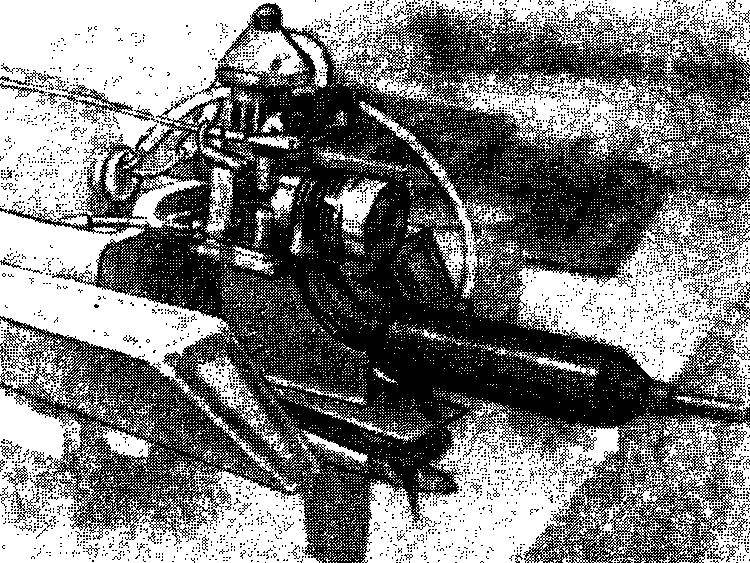 Aft models with all-moving engine. The drive of the propeller by a flexible shaft connecting the vertically disposed crankshaft of the engine with a horizontal propeller shaft.
The comment of the expert
I would like to note that the model is not fully restrict the range of good work designers in ship modeling class hydro. Although today is dominated by machines, according to the scheme similar to the airboat Italian athlete, not so rare attempts to “break away” from the mainstream. No fruitless search in the carry-on model making, justified in a great sport; opportunities there are to improve individual units. Take as an example the original all-moving power system with flexible shaft shown in the drawings (note that this is not a testing technique, already used on one of the world Championships), or the same tillers, but coupled with a very unusual boat-the”type” of the Bulgarian athletes. So to say that the search in the class of “hydro” is completed, does not. And what will become of these models tomorrow, depends including from you, readers-modelers.
Ya VLADIS